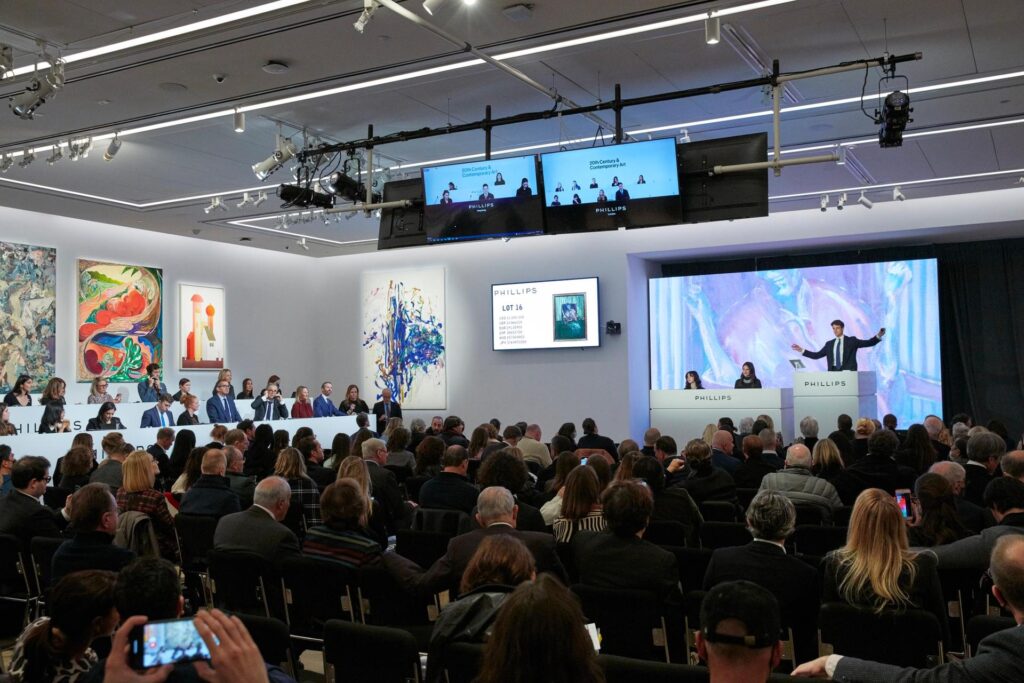 Phillips 20th century and contemporary art evening sale, staged in the firm’s spanking new Park Avenue headquarters last night, fetched a rock solid $119m ($137.9m with fees). Three artist records were set and only three of the 46 lots offered failed to sell for a slim buy-in rate by lot of 7%.

That said, 11 of the entries, including the top lot Francis Bacon, were backed by third-party guarantees, insuring at least a minimal success for those outcomes.

The tally (with fees) nudged past pre-sale expectations of $96.3m to $133.1m (estimates to do not include fees). That result trumped last December’s live-streamed evening sale that made $134.6m for the 31 sold lots—at the time, the highest in the company’s history. 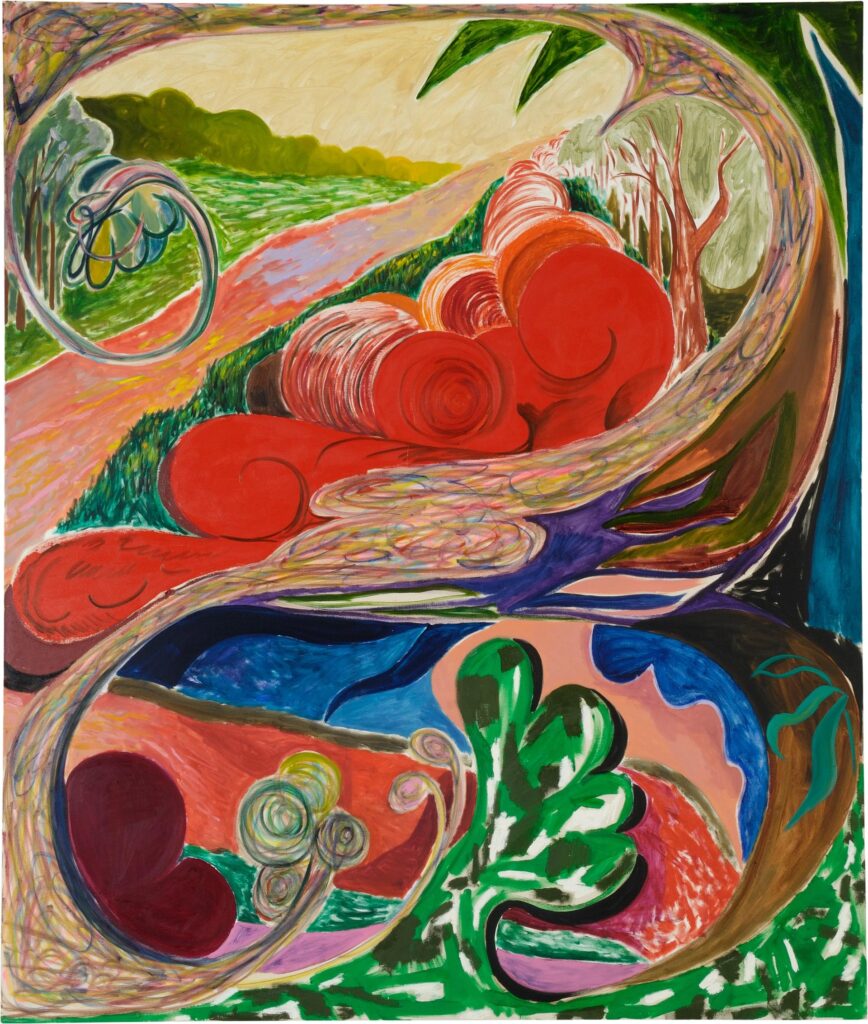 Shara Huges’s Inside, Outside (2018), Courtesy of Phillips 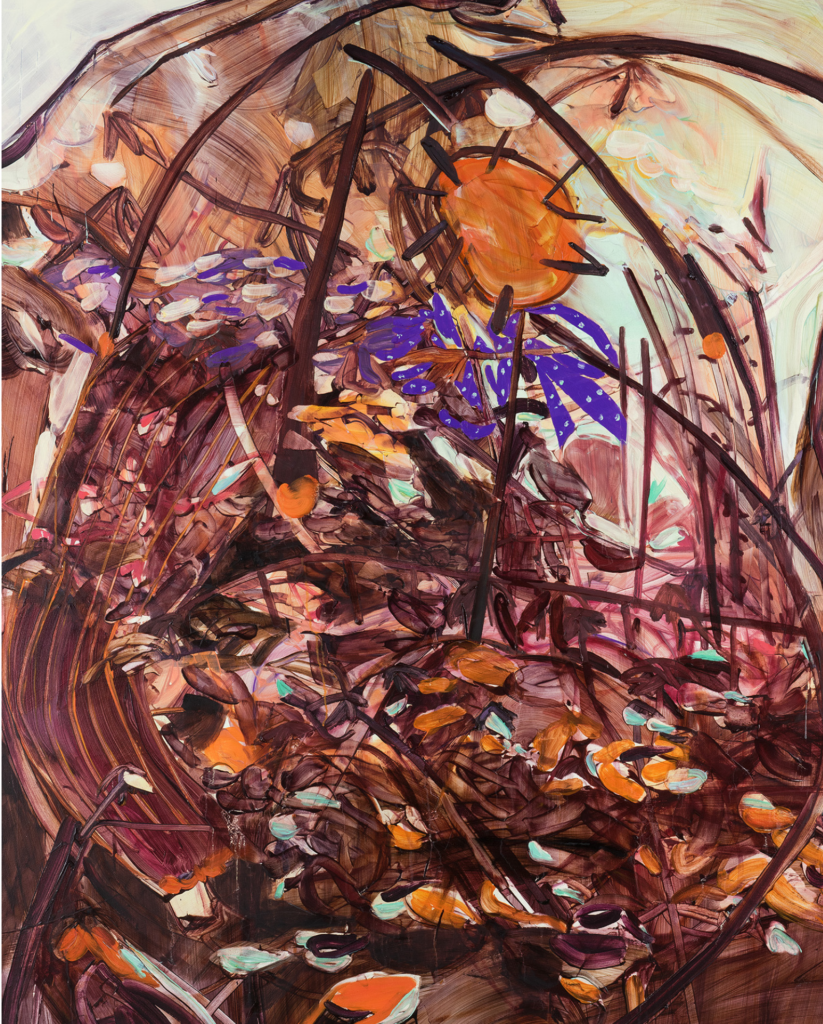 The roundup of lesser-known yet hot-to-market emerging artists gained more ground with (lot five) Titus Kaphar’s riveting double-portrait, Fade with Time (2013), depicting a seated and standing figure, the former clutching a ceremonial sword and based on a 19th century photograph of a Confederate soldier and his slave-owned black servant that sold for $650,000 ($816,500 with fees, est. $400,000-$600,000). 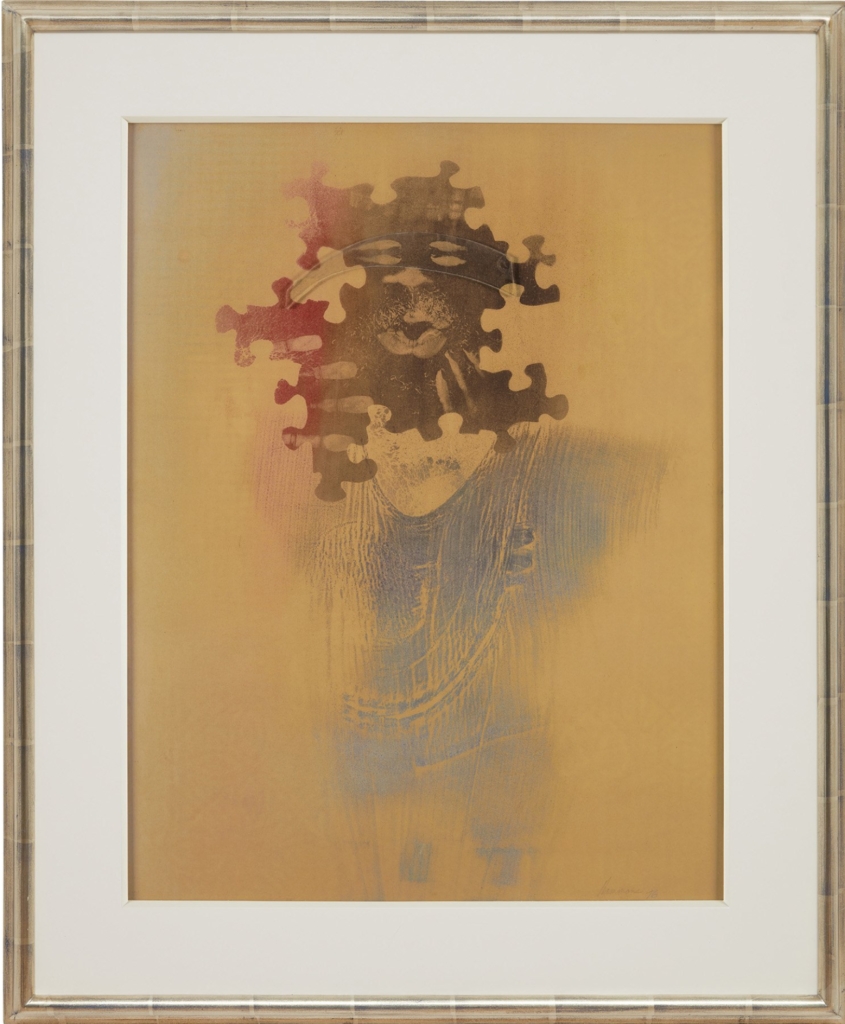 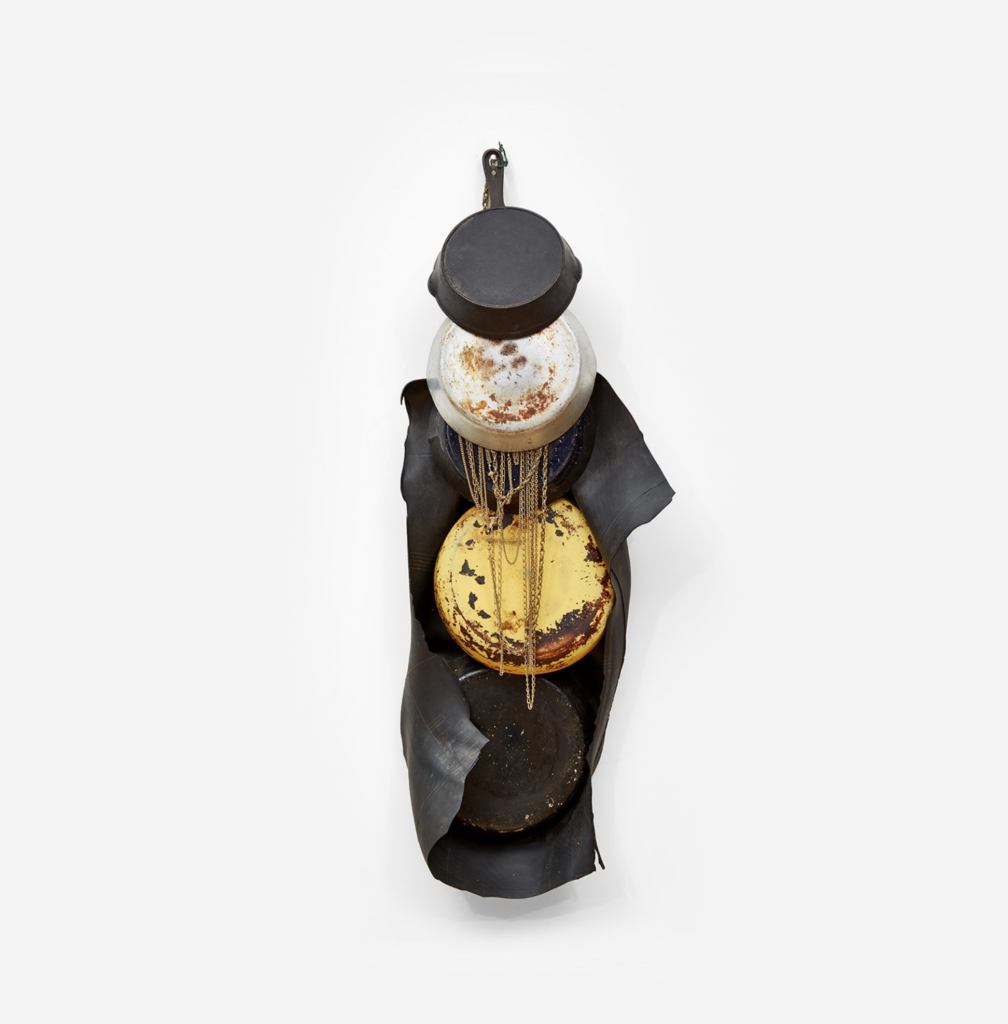 Later in the evening, a Hammons’s sculpture Untitled from 1988, comprised of found frying pans, rubber tire tube and metal chains, and roughly the shape of a black dress, sizzled at $3m ($3.6m with fees, est. $1m-$1.5m].

The mood changed again with (lot eight) Joan Mitchell’s late and still rapturous Untitled abstraction from 1992. The generously scaled and explosively colored work measured 110in by 78 ¾in and sold for $10m ($11.8m with fees, est. $4m-$6m).

The price was surely jazzed by the critical raves garnered from the artist’s current retrospective at the San Francisco Museum of Modern Art.

Further back in time, (lot nine) Georgia O’Keeffe’s fresh-to-market and breezily exotic landscape, Crab’s Claw Ginger Hawaii from 1939, modestly scaled at 19in by 16in, went to a telephone bidder for $6.4m [$7.7m with fees, est. $4m-$6m). It was one of 22 paintings O’Keeffe painted during and after her nine-week long sojourn in Hawaii that year. 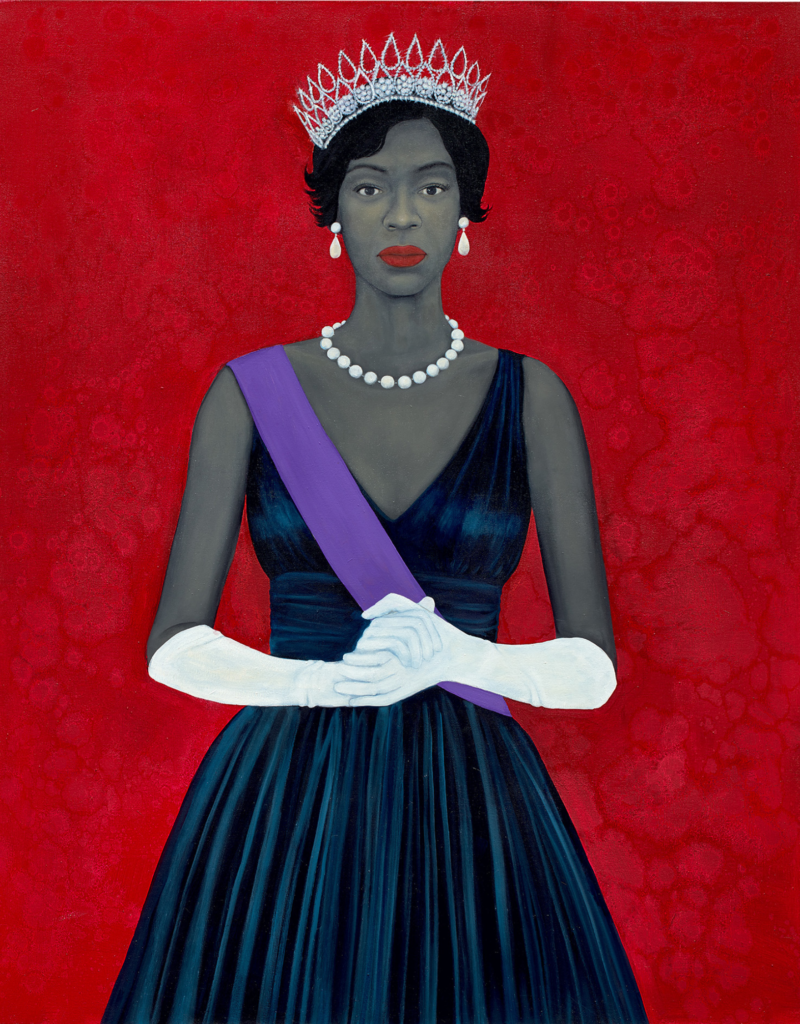 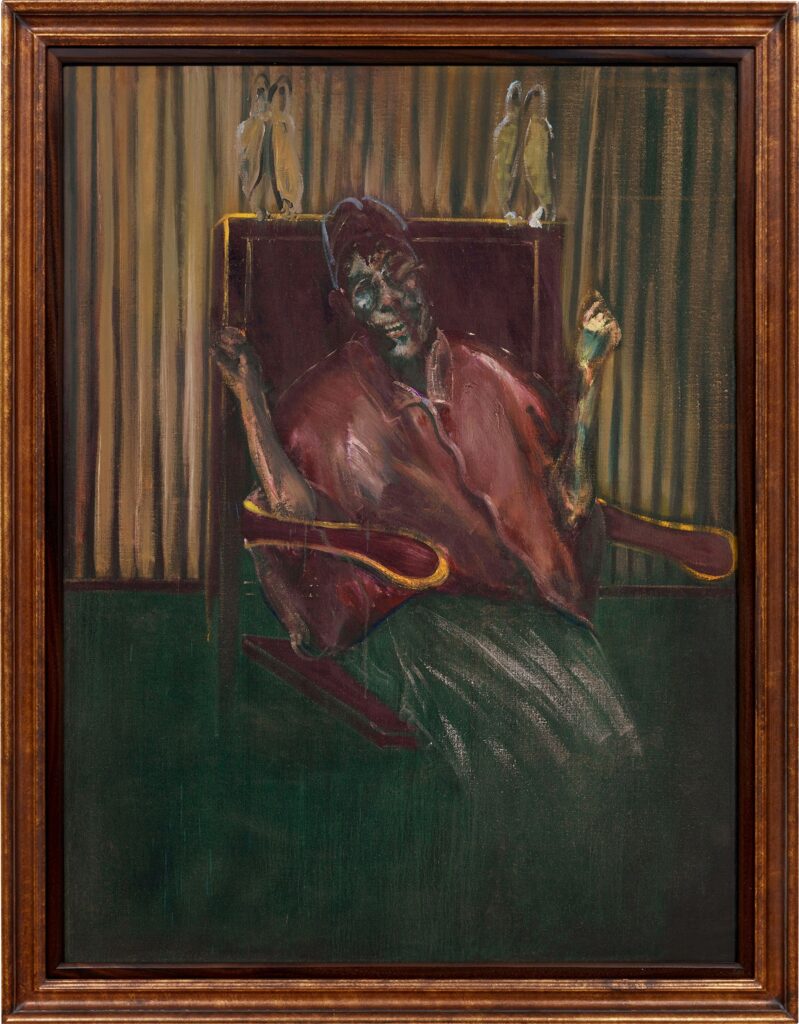 The star lot of the evening, Francis Bacon’s dark and rather frightening visage of Pope with Owls from around 1958 and featuring the dried blood-red robed figure seated throne-like in an upholstered chair with owl figurine sentinels guarding his teeth baring eminence, barely rose to $33m hammer (est. $35m-$45m)—the same with fees and apparently reflective of the chunky financing fee awarded to the third-party guarantor.

Fresh-to-market ,without a trace of auction history, the Tangier period painting was acquired by the seller in 1986 from the late and storied Swiss art dealer Thomas Ammann for $700,000. The last Bacon pope to land at auction—at least one similarly scaled and roughly dated—was Untitled (Pope) from 1954, which sold at Sotheby’s New York in November 2012 for $29.7m.

The appetite for works by Jean-Michel Basquiat appeared unsated with Untitled (The Door) from 1984 in acrylic, oil and Xerox collage on a wooden—you guessed it—door, went for $7.1m [$8.5m with fees, est. $6m-$8m). It was underbid by Adam Chinn, formerly of Sotheby’s and now a founding partner of the new advisory Art Intelligence Global. The work last sold at Phillips de Pury & Company New York in May 2010 for $1.7m.

A late and massive Andy Warhol, The Last Supper/Be a Somebody with a Body from 1986 and striking in black and white, summarised the artist’s dual obsession with Catholicism and the male figure. It rose to $5.6m ($6.8m with fees, est. $6m-$8m) and came to auction with a third-party guarantee.