Skip to contentSkip to content
Avenues Magazine
Inside the Dual Jasper Johns Exhibits in NYC and Philadelphia
September 28, 2021 by Judd Tully

At 91, Jasper Johns may be America’s greatest living artist. Avenue previews his double-whammy retrospective at the Whitney and Philadelphia museums of art 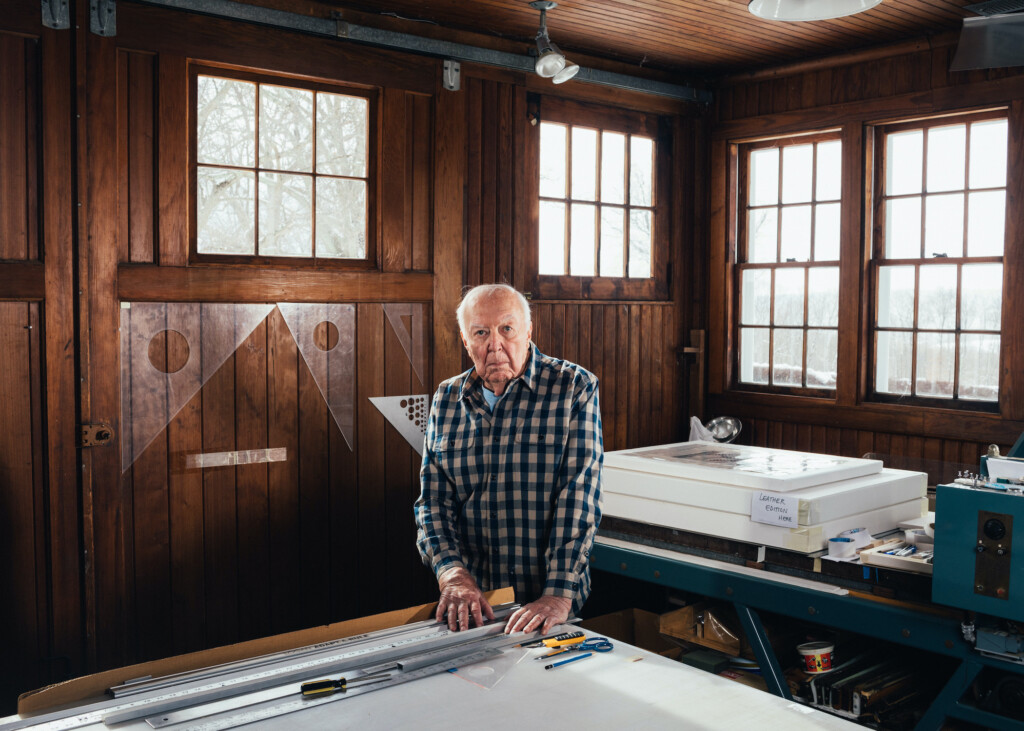 The artist Jasper Johns at his studio, a converted barn in Sharon, Conn., Feb. 2, 2018. Now 87 and widely regarded as America’s foremost living artist, Johns remains loath to offer biographical interpretations of his work, but a new retrospective at the Broad covers six decades and offers a relatively intimate glimpse at his work. (Andrew White/The New York Times)

At 91, Jasper Johns, the widely revered and famously private American artist who was an impoverished unknown until he became an overnight art-star sensation at age 27 with his debut solo show at the Leo Castelli gallery, will be honored this month with an unprecedented dual retrospective opening in both New York and Philadelphia.

“Jasper Johns: Mind/Mirror” will showcase more than 500 works dating from 1954 to the present — a panoramic body of work that ranges from painting, sculpture, and drawing to prints, books, costumes, and even theater sets.

Both exhibitions have been designed as a series of curated rooms akin to twin mini-mansions, each having ten chambers with names like “Real Things as Paintings,” “Doubles & Reflections,” and “Disappearance & Negation.”

“The rooms tell you the story, and for every room in one place, there’s a room in the other,” says Carlos Basualdo, the Keith L. and Katherine Sachs senior curator of contemporary art at the Philadelphia Museum of Art. For example, he explains: “Philadelphia shows Johns’s number paintings, and drawings, and the Whitney shows flags and maps. We have chosen works that are mostly predicated on darkness, while everything at the Whitney is much more surreal.” 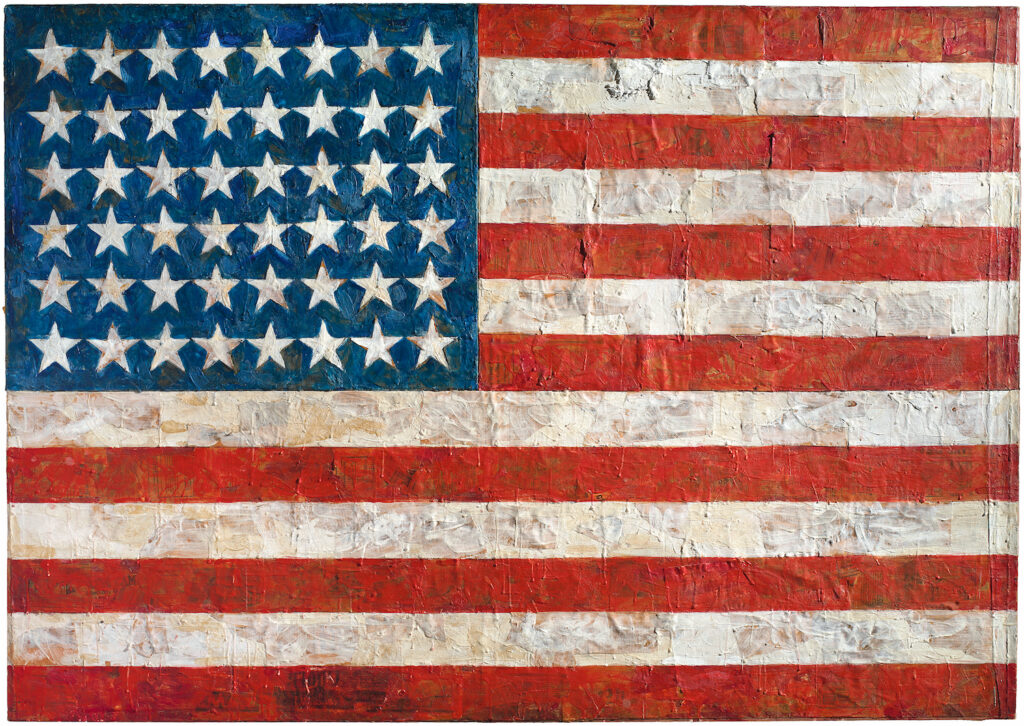 “Ultimately, we took the inspiration from Jasper’s own art,” says Scott Rothkopf, senior deputy director at the Whitney Museum of American Art and the exhibition’s cocurator. “Since the very beginning of his career, the artist had been interested in mirroring, in doubles, in reflection, and doing a version of a work in encaustic or oil, in black and white or in color, and playing with reversal inversions of figure and ground. And that we could have two shows that in a way mirror, echo, or reflect one of them, that became the kind of structural logic or metaphor for how the exhibitions would proceed.”

A retrospective for Johns is certainly nothing new — from his 1977 exhibition at the Whitney organized by David Whitney (no relation) to the 1996 show at the Museum of Modern Art, splendidly curated by the late and storied Kirk Varnedoe, to the 2017 in-depth survey “Jasper Johns: Something Resembling Truth,” cocurated by Roberta Bernstein and Edith Devaney at the Royal Academy of Arts in London that also traveled to the Broad in Los Angeles.

This current mega-production, more than five years in the making and delayed by more than a year by the pandemic, is anchored in part by the five-volume catalogue raisonné of the artist’s paintings and sculpture that was authored by Bernstein, an art historian and curator who met Johns in 1967 when she was a graduate student at Columbia University. Her opus enabled the curatorial duo to drill deep into the artist’s six-and-a-half-decade oeuvre, as well as mine the quiet cooperation of the artist himself.

“While there’s a thread of continuity in his work,” says Bernstein, “he’s always found new motifs that he develops. There’s a kind of continuity within the change and, as a result, the work is really visually stimulating — in the layering of visual elements and in the layering of thoughts and ideas. Even at 91, he’s still working in the studio every day, and I think it’s really terrific that a younger generation of curators are looking at his work and will come up with new ways of putting it together.”

Basualdo and Rothkopf have had plenty of opportunity to interact with Johns at his 170-acre estate in Connecticut. The artist is a famously enigmatic and supposedly prickly and hermetic figure, at least in some media accounts.

ALL THINGS CONSIDERED Untitled, 1972, a four-paneled work executed in oil, encaustic, and collage on canvas with objects
Image courtesy of the Philadelphia Museum of Art

One critic described the artist’s countenance this way: “his round face can lock up like a banker’s. The eyes can gleam… but even then, the mouth droops dourly, and imparts few secrets.” Johns famously blocked Jill Johnston’s unauthorized 1996 Thames & Hudson biography, Jasper Johns: Privileged Information, from using any reproductions of his work. But that rather unflattering reputation seems more rooted in the past than present.

“He’s been both extremely close and somewhat distant,” Rothkopf says, “which is typical, I guess, of Jasper’s imagination, maybe. We have been spending lots of time with him in his studio and in researching works from his own personal collection, and we’ve been keeping him informed of all of our ideas and plans around the show and the catalogue. He’s always interested to hear about our work, but he has been distant in the sense that he has not been at all directional, more so than any artist I’ve ever worked with.”

“What we’re hoping, and I believe Scott feels the same way,” said Basualdo, “is that if you just go to the Whitney, you will certainly get a very good sense of the work. Same thing if you are to only go to Philadelphia. But if you go to both, you will get a much richer picture. And more important, just like going from one to the other and thinking about one while you are in the other, I think you will get to experience that relationship between presence and absence which is also there throughout Jasper’s work.”

“It’s a really brilliant way to represent the work of Johns,” said Lisa Dennison, the former director of the Solomon R. Guggenheim Museum and currently EVP and chairman of Sotheby’s Americas.

“To use his own methodology, so to speak, and to create an exhibition that plays on his fascination with symmetry and doubling, is highly innovative, and given that it’s been like 25 years since we’ve seen such a show on the East Coast, there’s a whole generation of people who haven’t experienced his art.” 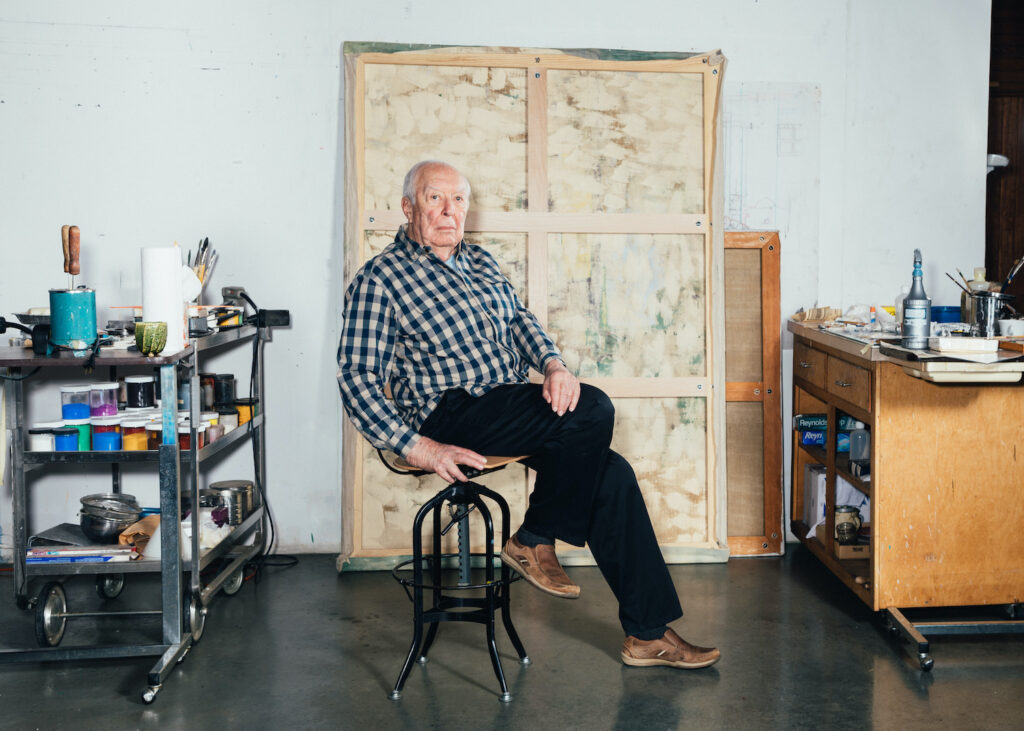 The artist Jasper Johns at his studio, a converted barn in Sharon, Conn., Feb. 2, 2018. Now 87 and widely regarded as America’s foremost living artist, Johns remains loath to offer biographical interpretations of his work, but a new retrospective at the Broad covers six decades and offers a relatively intimate glimpse at his work. (Andrew White/The New York Times)

The double-whammy presentation begins with an early drawing of simple circles next to one another (Untitled, 1954, given by Johns to his collaborator and lover Robert Rauschenberg) and guides viewers all the way to Slice, an oil on canvas from 2020.

A certain star is Johns’ first Flag, an encaustic, oil, and collage on canvas executed in 1954–1955, that ultimately landed in the collection of the Museum of Modern Art, a gift of the architect Philip Johnson in honor of Alfred Barr, the museum’s trailblazing director.

Flag appeared in the artist’s debut solo show at the Leo Castelli in 1958, where all but two of the 18 works on offer sold, including three to MoMA, personally chosen by Barr and his curator Dorothy Miller. Poet, Ab-Ex scenester, and MoMA worker Frank O’Hara had urged Barr to see the work.

Flag, bearing the artist’s alchemical magic of encaustic, a delicate method of melting wax onto canvas or fabric, emblazing the surface with a transparent glow and further collaged and layered, electrified both critics and the public. As John Cage, the late Minimalist composer and Johns’s close friend and collaborator, said, “The paint is applied so sensually that there is the danger of falling in love.”

Johns himself said his paintings were “things the mind already knows.” He also told one interviewer that “when something is new to us, we treat it as an experience. We feel that our senses are awake and clear. We are alive.” 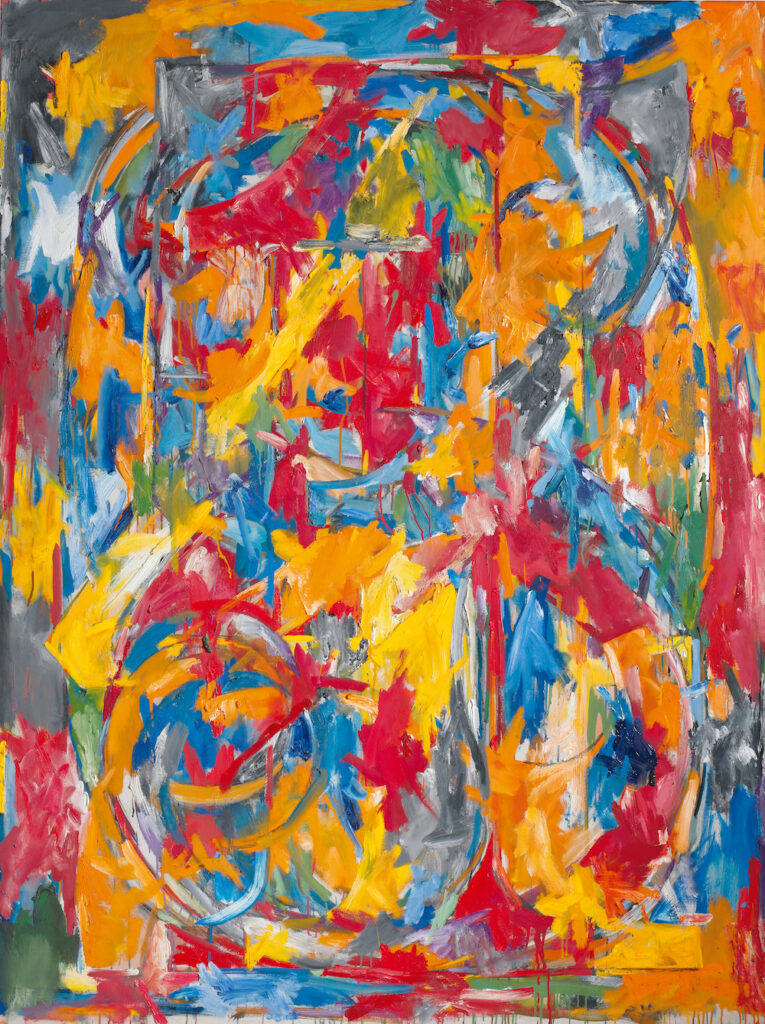 LAST WORD 0 through 9, 1960, an oil on canvas
Image courtesy of the Philadelphia Museum of Art

Dealer Leo Castelli represented Johns from that first show until the gallerist’s death at age 91 in 1999. He characterized the impact of that exhibition in Laura de Coppet and Alan Jones’s 1984 book The Art Dealers: “It was another one of the great events in my career as an art dealer, and I think, an even greater event for art history.”

Following Castelli’s death, New York dealer Matthew Marks stepped in to take the reins of Johns’s representation. He met the artist in 1987, when he was 25 and working for London dealer Anthony d’Offay.

“I borrowed a sketchbook of Jasper’s for the opening exhibition of my gallery in 1991,” says Marks. Since then, he has staged six solos of the artist, including a show in 2005 that featured new work from the artist’s Catenary series, based on what mathematicians refer to as “the catenary curve” and comprised in part of loosely attached strings. The catalogue for that show featured an essay by the young critic Scott Rothkopf, and four of those works are in the Whitney presentation.

“I thought it would be interesting to have someone new write on the work,” said Marks, setting the stage for the artist and emerging curator’s much bigger future collaboration.

Still, not all critics fell for the new work, with Michael Kimmelman of the New York Times castigating the series as “ever more preening and self-mythologizing brands of obscurity.”

For Johns, critics have not been especially appreciated. “I always find it interesting that they have anything to say, because I find it difficult to say much,” as he told Calvin Tomkins in the scribe’s masterful 2006 New Yorker profile. 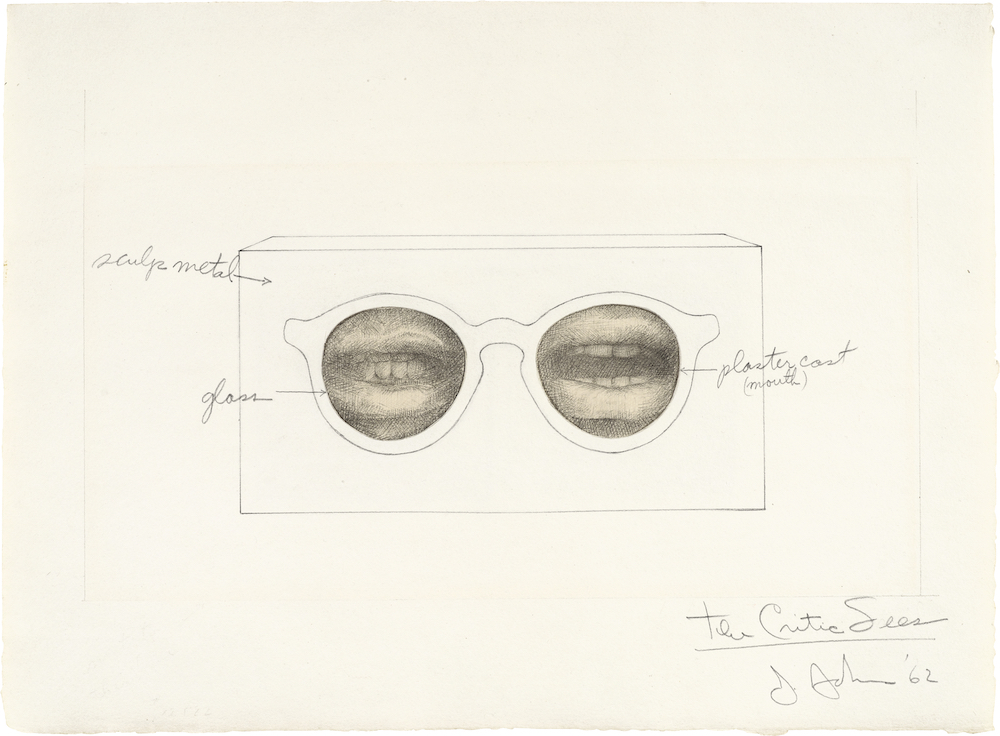 The Critic Sees, a graphite pencil on paper from 1962
Photo courtesy of the Whitney Museum of Art

A wickedly sublime sculpture from 1961, The Critic Smiles, which features a disembodied head with spectacles and teeth for the eyes and is included in the Philadelphia presentation, succinctly conveys that outlook. (A related drawing of the same title from 1962 is in the Whitney side of the exhibition).

Though no publication date is set, there is a major biography of Johns in the works by Deborah Solomon, who has penned books on Joseph Cornell and Jackson Pollock. The work, which has full access to the artist and his wide circle of privacy-protecting friends, will assuredly shed new light on the extraordinary life and career of America’s most famous artist since Pollock.

“He finally agreed to the project, [but] he said to me, ‘I have one condition,’” said Solomon. “And that, of course, made me very nervous. I thought, who knew what this condition might be… what if he says you can do the book, but you can’t use my name? With Jasper, you never know what surprise he will have in store for you. But instead, he said he didn’t want the book published during his lifetime.

“Johns: Mind/Mirror,” simultaneously at the Whitney Museum of American Art and the Philadelphia Museum of Art September 29, 2021–February 13, 2022