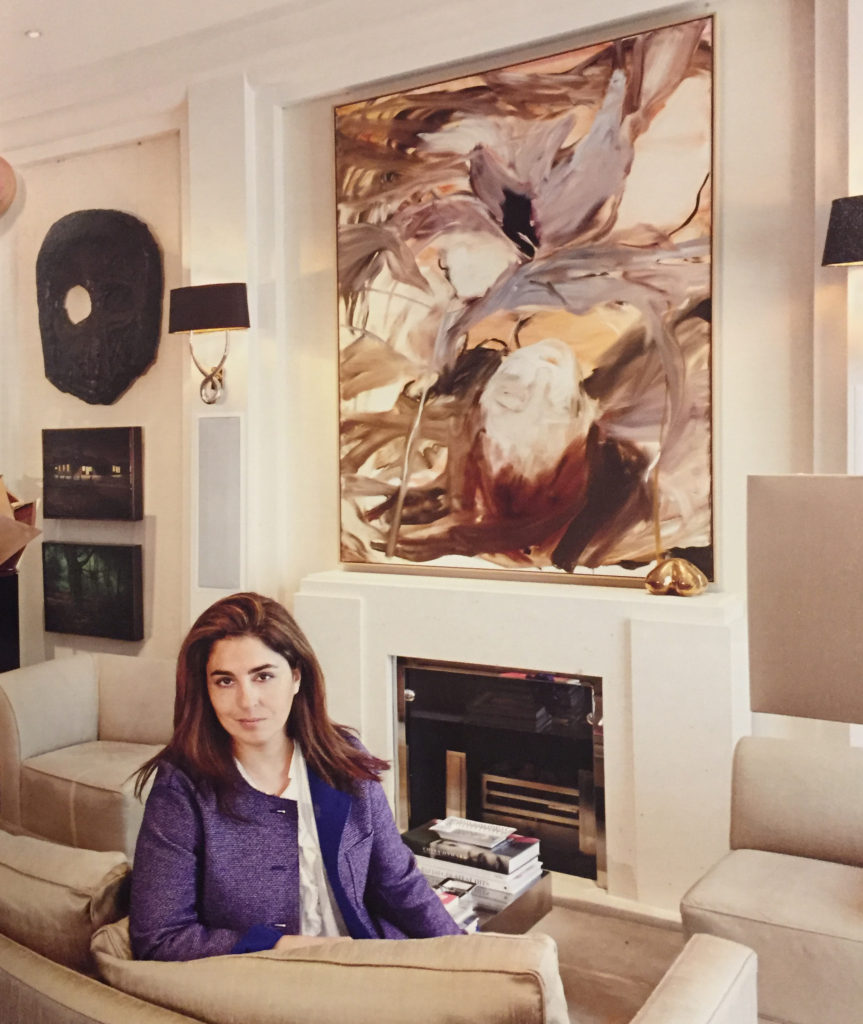 Maryam Homayoun Eisler seated in her London salon surrounded by artworks from the two collecting categories that first engaged her: Chinese and British contemporary art From left are an untitled 2003 oil by Zeng Fanzhi and Conrad Shawcross polished bronze Perimieter Studies. 2011, from top, hang Thomas Houseago’s bronze mask Study, 2010, and two 1998 enamels on board by George Shaw. Over the fireplace Cecily Brown’s The Redhead

For Londoner Maryam Homayoun Eisler, building a collection of art from Britain, China, and the Middle East begins with intensive study and carefully considered acquisitions

“I don’t like to regionalize myself,and I don’t want to be pigeonholed, definitely not!” says Maryam Homayoun Eisler in a typically frank exchange while sitting in her art-filled Kensington home. “My collecting interests are varied. I’m equally as interested in Iran as I am in the greater Middle East and in British contemporary art.” The variety of her interests is matched by an intensity of engagement with each. When Eisler becomes focused on something, enthusiasm can turn to fixation as she immerses herself in study. As executive editor alongside editor and publisher Hossein Amirsadeghi, she produced both Unleashed: Contemporary Art from Turkey and Art and Patronage: The Middle East for Trans Globe Publishing in 2010. Last year’s Sanctuary: Britain’s Artists and Their Studios, from the same team, was released by Thames & Hudson. More remarkable than either the range of topics or her alacrity in pursuing them is that Eisler, a Wellesley College graduate who also holds an MBA from Columbia University, took up an interest in publishing only four years ago, and her engagement with art began just six years before that. 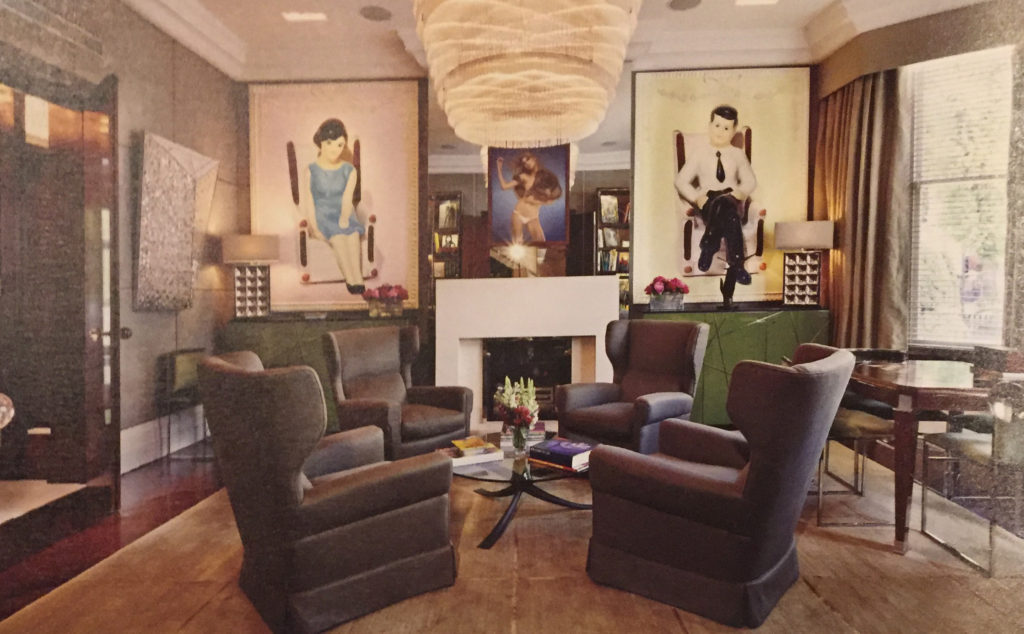 Nor do her books hint at the art category that sparked her obsession. In 2004 Eisler and her husband, Edward, an investment banker, were taken by a friend to a nonprofit gallery in London dedicated to Chinese contemporary art, an obscure collecting category at the time. “We went to the Red Mansion Foundation,” says Eisler. “In those days it was a hole-in-the-wall in Oxford Circus. There were stacks and stacks of paintings, and somehow it just resonated for both of us.” They purchased five or six works, taking advantage of the reasonable prices. The cache included Xue Song’s Mao Tse-Tung, 2006, and Fu Hong’s Square, 2005. The collector was particularly taken by “the element of sarcasm and the cultural change reflected in the paintings, which meant something to me because I was almost a child of the revolution.”

The revolution she speaks of was in Iran. Born in Tehran, Eisler emigrated to Paris at age 10 with her family a year before the 1979 overthrow of the shah. After earning her degrees, she embarked on a career in cosmetics marketing with L’Oreal and Estee Lauder. A brief foray with Maybelline took her to China, which she admits almost certainly had an impact on her initial attraction to art of that country. Duringa followup stint with L’Oreal in New York, she married Edward, then at Goldman Sachs, and the couple moved to London. The relocation was just the latest for both Eislers, who share an emigré background: Edward’s parents, both physicists, defected from the Soviet Union to Austria when Edward was three years old. 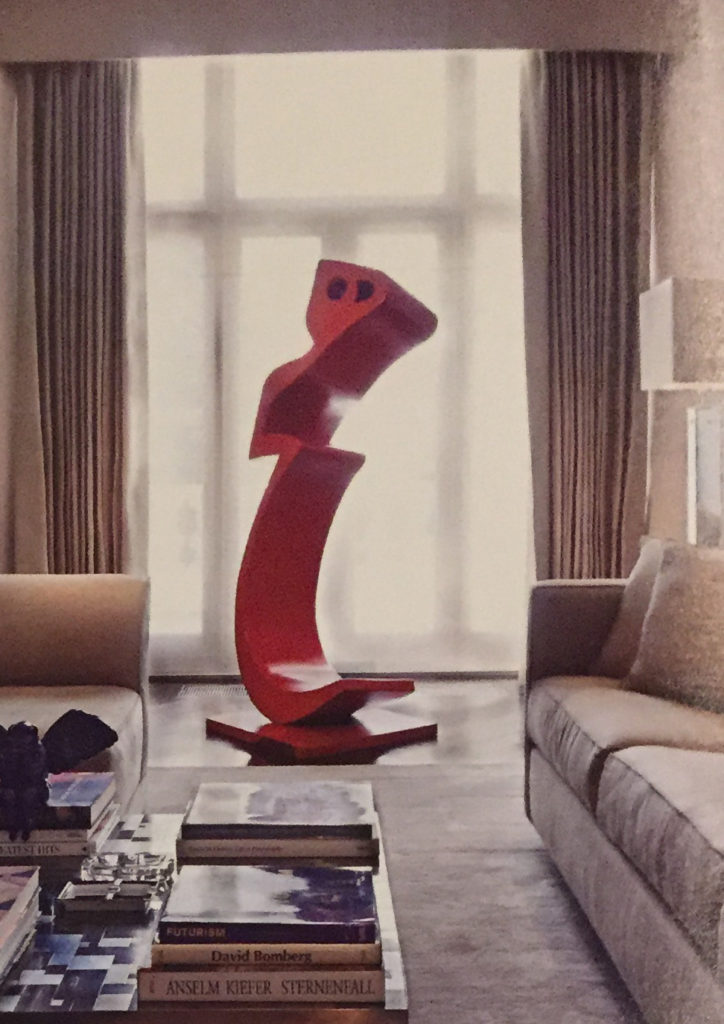 The visit to the Red Mansion Foundation was fortuitous. “It was a time in our lives when we could actually afford to look at art” with the intention of purchasing, says Ester. But her curiosity didn’t lend itself to Chinese work. In fact, the couple’s first serious acquisition was a piece by the German born Frank Auerbach, another emigrant to London who became a British citizen in 1947. His 1961 Portrait of E.O.W. featuring Estella (Olive) West, his principal model from 1953 to 1973, whom he painted only at night under electric light—is one of several works by the artist that hang on the walls of the Eislers’ London home. “It was our first really major, major purchase after coming a little cold into the game and having never bought any thing serious before,” she says. “I remember feeling quite uneasy at that moment, but something just struck a chord. It was emotional and maybe not rational.”

With that the couple was hooked and set about collecting both Chinese and British work. Maryam in particular focused on Chinese art in her intensive way. A 2006 trip to China included a three-week tour of the studios of the country’s art stars, when their work was still relatively accessible; acquisitions included Yan Pei-Ming’s Soleil Rouge III (Mao), 1993, and Zeng Fanzhi’s Untitled, 2003, depicting a red-jacketed man with elongated fingers. In addition to the marathon trip, Eisler put her inquiring mind to work. “I did a tremendous amount of research and was at the forefront of the category as it was developing,” she remembers. “I was at every exhibition and talk and read every document that was written. But things go very fast and you need to be present locally and regularly, and that’s not easy.” When the Chinese contemporary market skyrocketed in 2007, the couple’s interest waned.

By Eisler’s estimation the collection is currently 8o percent British, and a large chunk of that is pieces by Young British Artists and those who came later, including Cecily Brown, Tracey Emin, Antony Gormley, Gary Hume, Conrad Shawcross, John Stezacker, Gavin Turk, Gillian Wearing, and an eerie pair of 1998 semi-realist paintings of council estate housing on the crumbling edge of Coventry by George Shaw, a 2011 Turner Prize runner-up. In addition to Auerbach, modern works include Portrait of Dinora, 1952, a ravishing oil by David Bomberg, under whom Auerbach studied when he first arrived in England, which hangs inches away from a Leon Kossoff still life. 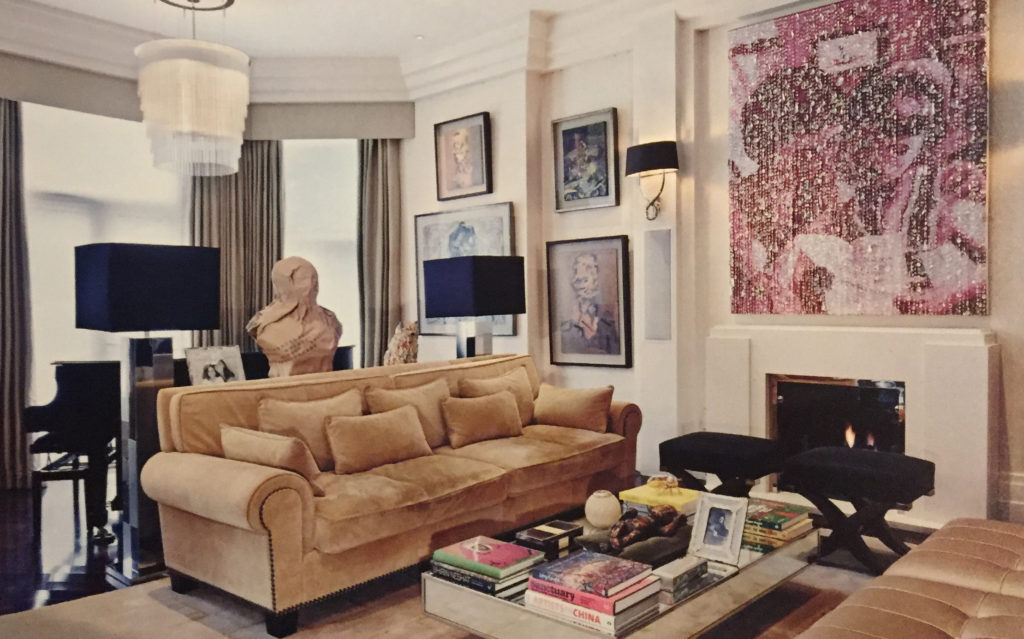 More recently, Eisler embraced the work of Gordon whose’ post-apocolytic paintings on acrylic gel and spray radiating across the pages of Financial Times stock listings, were recently featured in a sold-out show at EdelAsante Gallery on Vauxhall Bridge Road. “She’s very forward think mg in the things she pursues,” says gallery partner and cofounder Jeremy Epstein. “She’s not someone who follows trends. She’s a tastemaker.” Eisler gracefully sidesteps certain in acquisition details, such as the name of the private dealer who sold her that first Auberback. “In general, I prefer buying from galleries. I believe in the a rust getting something. So the majority of purchases are through galleries, and of course, I’ve bought at auction,” she says.

Consdering her penchant for study, it was natural Eisler would require a new field to pursue after she and Edward drew back from Chinese contemporary work. Being unable to return to Iran, the collector engaged with what she calls the “great Middle Eastern circle in London,” of which current art and culture are a part. In zoo7 she began attending the Dubai art fair and proceeded to one in Abu Dhabi. “It was the best way for me to reconnect to my country,” she says. The breakout staging of modern and contemporary Arab, Iranian, and Turkish art sales by Christie’s in Dubai, also in 2.007, afforded the collector even more exposure. As her research has deepened, she has shared her expertise through an expanding patron role as co-chair of the Tate’s Middle East and North Africa Acquisitions Committee and as a founding member of the British Museum’s Contemporary and Modern Middle East Acquisitions Committee. And on the Western front, the couple’s spearheading support of both the Gerhard Richter and Roy Lichtenstein retrospectives at the Tate Modern, through the Maryam and Edward Eisler Foundation, made art press headlines in 2011.

“As a collector, Maryam really champions non-Western art and that’s been important,” says Iwona Blazwick, director of London’s Whitechapel Gallery, where Eisler serves as a trustee. “Going to her home, you get confronted with other geographies and sensibilities.” In that home, a large abstract composition in oil, crystal, and metal hooks on canvas, a kind of optical cascade of flowing glass beads, hangs above the living-room fireplace. This turns out to he Iranian superstar Farhad Moshiri’s Love Letter, 2008. Another magisterial Iranian work stands sentinel across the room, the 71-inch high resin Standing Heech, 2006, by Parviz Tanavoli. Throughout the house, works by other Iranian artists claim significant wall space, including Farhad Ahrarnia’s hand embroidery on digital photographs printed on canvas, as well as Mirror and Gatch, zoo8, in glass mosaic tile and chalk on wood by 88-year-old Monir Farmanfarmaian. 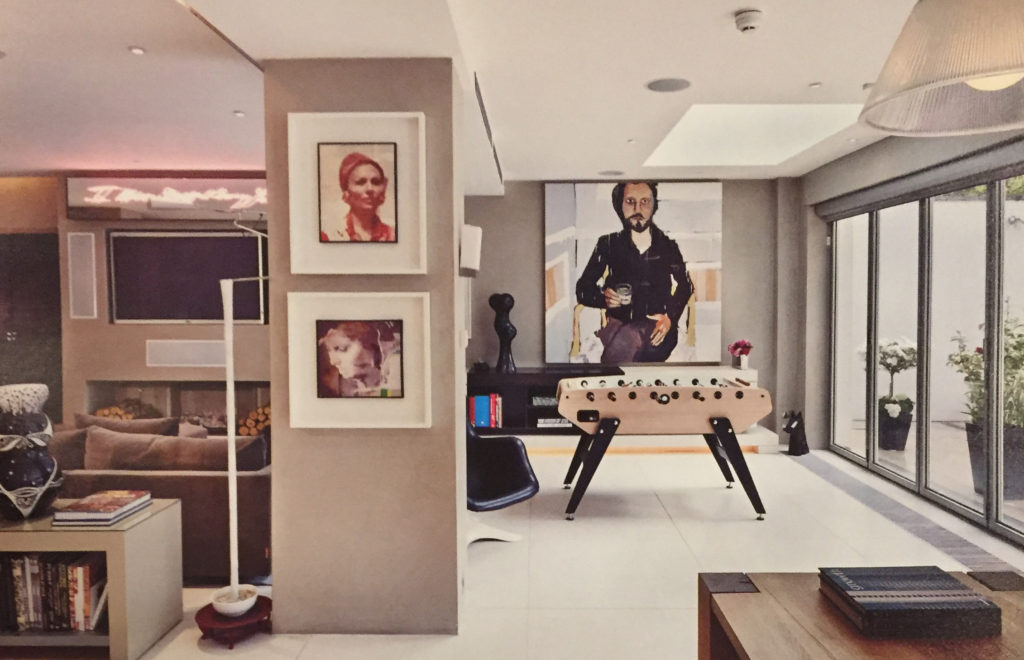 Study isn’t a lonely endeavor for Eisler, and she isn’t shy about crediting the individuals who contributed to her expanding knowledge. Lebanese collector Maya Rasamny, with whom she co-chairs her British Museum committee, and London-based curator Rose Issa, who is at the forefront of building awareness of visual art from Iran and the Arab world in her project space on Great Portland Street in the West End, are great influences. Issa also inspired Eisler’s support of the emerging generation of Iranian artists. “I live in a privileged situation in the Western world, so I can support them by buying their artwork and by promoting it to similar-minded people,” says the collector.

Asked if she and Edward collaborate in their collecting pursuits, Eisler answers, “Yes it’s collaborative, but there are certain areas he’s more interested in—namely Western art, modern and contemporary British art, and also the Chinese movement at a certain time because it was truly novel. With Iranian art, he understands it but he doesn’t love it.”

It’s not easy to predict what collecting direction Eisler may take next. “I love beautiful art,” she says, expressing her guiding principle. “That’s my problem. I appreciate political art and conceptual art, but I need to live with beautiful art. I like aesthetics, and I’m not going to shy away from that.” Still, one may draw a clue to her next area of interest from her latest book, Art Studio America: Contemporary Artist Spaces, due out in November and completed, like her previous volumes, with Amirsadeghi. “It’s really been a hell of an adventure,” she says of the solid year of extensive travel in the United States that was required to complete the project. “And I’ve really discovered, in many ways, American contemporary art.” Watch out, New York.