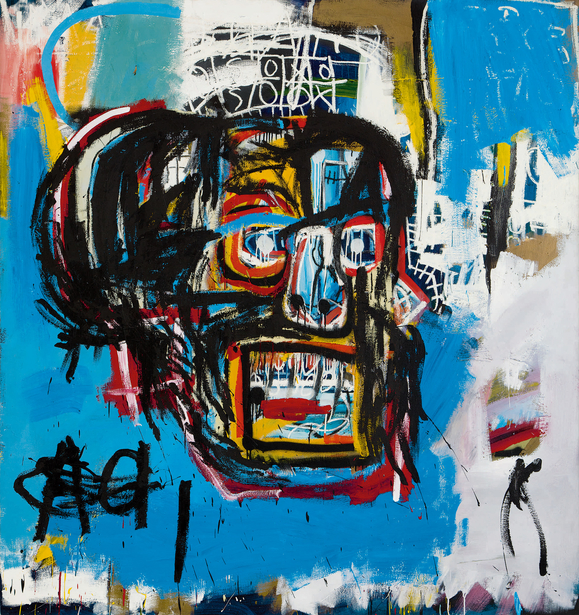 Powered by a barely known Jean-Michel Basquiat painting that had not been seen in public since 1982, Sotheby’s Contemporary evening sale rocketed to an unexpected and estimate-busting $319.2 million result.

Remarkably, just two of the 50 lots offered failed to sell, for a stellar buy-in rate by lot of four percent.

The result easily trounced last May’s $242.1 million auction for the 42 lots that sold.

Forty-five of the 48 lots that sold tonight made over a million dollars and of those, four exceeded $10 million.

Estimates do not reflect the buyer’s premium.

Sotheby’s and/or third parties financed 18 lots, representing cumulative estimates ranging from $143.6 to $199 million, including the Basquiat.

The Kusama was backed by a house guarantee, so Sotheby’s must have made a nifty profit on that bet.

Lock Kresler of New York/London’s Levy Gorvy was the underbidder.

The Stella hails from the collection of the late and storied art historian Robert Rosenblum.

Abstraction took a different turn with Mark Grotjahn’s feverishly impastoed composition [lot 4]“Untitled (Face 41.05)” in oil on cardboard and mounted on canvas from 2010, which realized $6,987,500 (est. $6-8 million). It was backed by a so-called irrevocable bid, also known as a third party guarantee.

It last sold at auction at Sotheby’s New York in November 2000 for $885,750 and passed through several private hands since then.

Another great mark maker was on offer with [lot 7] Agnes Martin’s faintly lined “Untitled #13” from 1980, at six foot square and comprised of acrylic, gesso and graphite on canvas, which sold to another telephone for $8,112,500 (est. $5-7 million).

Marc Glimcher, the president of Pace Gallery, was the underbidder.

Included in the artist’s breakout retrospective at the Stedelijk Museum in 1991-92, it was also backed by an irrevocable bid, as noted in the catalogue with a tiny horseshoe-shaped symbol.

It last sold at auction at Sotheby’s New York in May 1989 for $160,000, and, like the Twombly, passed through several private transactions since then.

In the highly prized Pop Art arena, [lot 8] Roy Lichtenstein’s late and mildly racy “Nude Sunbathing” from 1995, instantly recognizable with its regimental army of red hued Ben-Day dots, sold to the telephone for $24 million (unpublished estimate in the region of $20 million).

It was backed by an irrevocable bid, but by the looks of the bidding, it didn’t need the insurance.

The third-party backer, by the way, receives a negotiated financing fee for taking the risk if someone else wins the lot or a fixed fee if successful with the single irrevocable bid.

If this sounds murky or confusing, consult the fine print on page 318 of the evening catalogue.

There was also action for lots unencumbered with guarantees as evidenced by [lot 17), Jean Dubuffet’s smiling figure, “Gesticuleur” from 1946, executed in oil, enamel, sand, pebbles and resin on canvas that sold to the telephone for $5,412,500 (est. $1.5-2 million).

David Nahmad and Marc Glimcher were part of the posse of underbidders.

Figurative painting also having a good night, with Philip Guston’s [lot 11] hooded klansman smoker, “Cigar” from 1969, selling to a telephone bidder for $6,537,500 (est. $4-6 million). It was originally exhibited in the artist’s widely panned show at the Marlborough Gallery in 1970, when he debuted his radical and shocking new figurative paintings.

Marc Payot of Hauser & Wirth was the underbidder.

In the realist vein, [lot 15] David Hockney’s masterful “Gauguin’s Chair” from 1988, a painterly homage to the chair van Gogh installed for his friend’s disastrous visit in 1888 to Arles and evocative of the van Gogh of the same title residing in the van Gogh Museum in Amsterdam, sold for $3,837,500 (est. $2.5-3.5 million).

It was featured in the artist’s traveling retrospective in 1988-89, and is regarded as one of the first paintings the artist made upon his arrival in Los Angeles.

The picture last sold at auction at Sotheby’s London in 1974 for £24,000 and this time was backed by an irrevocable bid.

The market timing was perfect, given the much heralded Rauschenberg retrospective that opens to the public at the Museum of Modern Art on Sunday.

Both works were protected by irrevocable bids.

But the undisputed big gun and cover lot of the evening, Jean-Michel Basquiat’s hugely monumental skeletal head, [lot 24] “Untitled” from 1982, executed in acrylic, spray paint and oilstick on canvas, sold over the telephone to Japanese e-commerce magnate Yusaku Maezawa for a jaw-dropping world record price of $110,487,500 (unpublished estimate in excess of $60 million).

Auctioneer Oliver Barker audaciously opened the bidding at the world record price of $57 million, a figure that was set last May at Christie’s New York when Maezawa bought “Untitled (Devil)” from 1982, a mural scaled 94 by 197 inch painting.

Maclean, with ear buds plugged to his cellphone, finally quit at $97 million, yanking the iPhone plugs from his ears. He had joined the fray at $69 million.

As the hammer fell at $98 million, the packed York Avenue salesroom erupted in shouts and applause for what became the highest price at auction for any American artist and the sixth highest price for any work of art at auction.

(Only Francis Bacon’s triptych, “Three Studies of Lucian Freud” from 1969, sold for more in the contemporary arena when it was bought by Elaine Wynn for $142.4 million at Christie’s New York in November 2013.)

The Basquiat topped Andy Warhol’s “Silver Car crash (Double Disaster)” in two parts from 1963 that sold for a record $105.4 million at Sotheby’s New York in November 2013, up until tonight, the most expensive American painting at auction.

Virtually unknown to the closely watched Basquiat trade, the painting was acquired by visionary collectors Emily and Jerry Spiegel at a Christie’s New York auction in May 1984, the first time a Basquiat painting appeared in an evening auction and just two years after Basquiat painted it. The couple paid a then-record $19,000 against a $12-18,000 estimate. Art historian Robert Pincus-Witten was the Spiegel’s art advisor.

The painting had briefly appeared in a group exhibition, “Fast,” in June 1982, at the Alexander F. Milliken Gallery in SoHo.

“I originally sold the painting in 1982 for $5,000,” said Annina Nosei, Basquiat’s legendary SoHo dealer, who attended the sale. “Estelle Schwartz, the art advisor at the time for collector Phoebe Chasen, received a $1,000 commission. I got $2,000 and Jean-Michel got $2,000. Jean-Michel and I were very happy. I had to pay New York state sales tax, too.”

“It’s a fabulous price,” said the retired dealer of Thursday’s result, “but I think he deserves it. What I like about the painting is the structure of the space behind the figure.”

Basquiat was astonishingly productive in 1982, and works from that years are highly sought after; better known paintings from the year include “Dos Cabezas,” “Hannibal,” “Quality Meats for the Public,” “Dustheads,” “Untitled (Sugar Ray Robinson)” and “Untitled (Devil).”

A question remains: how many other sleeping Basquiat, masterpieces are there and will any of them come to market and challenge the Maezawa result?

The present painting, dominated by a floating, skull like head set against a stunning sky blue background and further enlivened with graffiti like, tic-tac-toe markings, came to market backed by an irrevocable bid.

It was consigned by the couple’s daughter Lise Spiegel Wilks, but without any identification in the Sotheby’s catalogue.

Pamela Sanders, their other daughter, by contrast, consigned 107 works from the family collection to Christie’s and pulled in $116 million for the 25 lots in Wednesday evening’s sale, trumpeting the occasion with a single-owner catalogue, “Works from the Jerry and Emily Spiegel Collection.”

The Basquiat delivered a miraculous close to the spring auction season.

“It was an amazing price,” said New York dealer and collector Adam Lindemann, who sold Basquiat’s “Untitled (Devil)” at Christie’s last May for a then-record price after buying the work at Christie’s London in 2004 for around $4 million. “Now Basquiat is higher than Warhol—what does that mean?

“He is the van Gogh of our time,” said Jose Mugrabi, the seasoned dealer and longtime Basquiat and Warhol champion. “This is the artist of the future.” 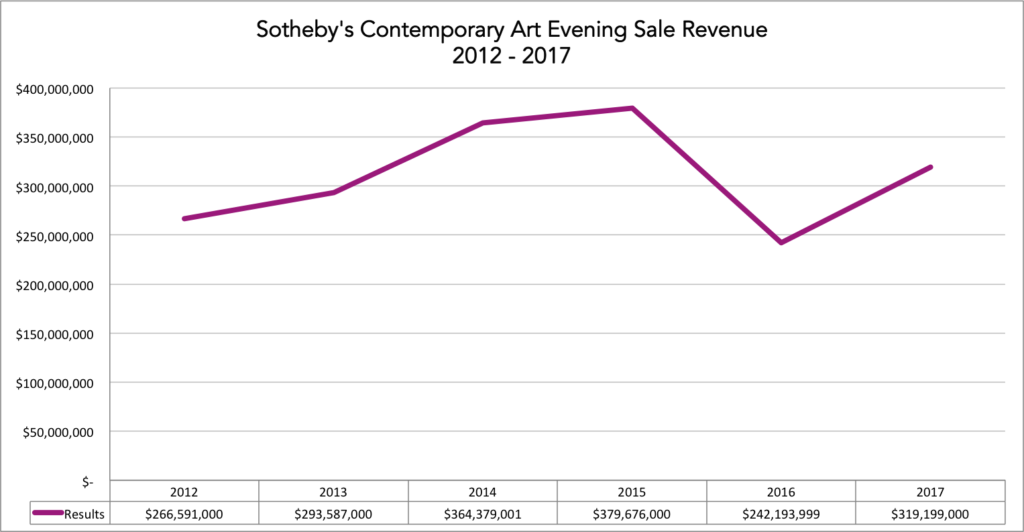