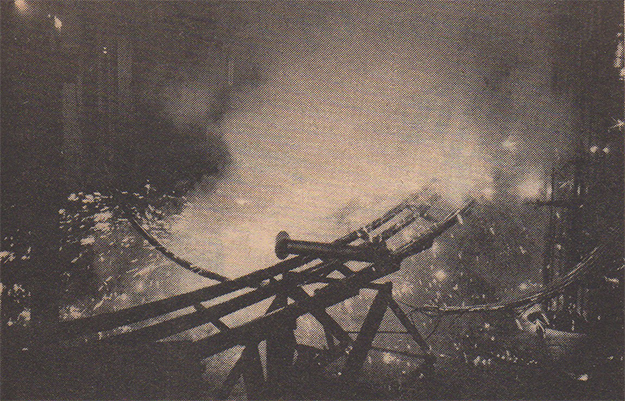 “And the rockets red glare, the bombs bursting in air,” at least that’s what Francis Scott Key could have raved of the recent smoky inferno at Bonlow Gallery, munitions compliments of the slightly stooped, curly-haired General Dennis ‘Where there’s smoke’ Oppenheim. That old Gallic confederate, Jean Tinguely, would have swooned in envy to be upstaged 22 years after his remote-control detonation of a scrap-head piano-cycle sculpture. “Hommage to New York,” at MOMA, which so titillated: the art paparazzi.

The General is fond of de-scribing his launching station as “unpredictable, on the threshold of going out of control.” In an earlier campaign at the Hirshhorn Museum in Washington, D.C., commandos from the Smithsonian’s Safety Division confiscated the General’s fireworks and kept him under constant surveillance. Nevertheless, one rocket was smuggled into the exhibit and fired, furthering the General’s unsavory legacy in the donut-shaped bunker on the Mall.

Oppenheim’s Information Minister, Steve Reichard, could not dissuade the gas masked pyro-troopers led by Battalion Chief Barracato of the City Fire Department from storming the gallery with gusto and water canons. One smoky-eyed veteran of the “bomb the critics back into the Stoneage” debacle, Rue Edgeton, commented that the General must of had his flares crossed since his fully mobile launching station was designed to be wheeled out on a frozen lake. De-spite the foreign allure of Bonlow and the prettily wrapped aerial rockets that caution, “for outdoor use only, light fuse and get away,” nary a patch of frozen tundra could be located on Greene Street.

Metro Picture star, Thomas Lawson, calmly guzzled screw-drivers by an open window in the director’s office before rescuers could evict him from the fire zone. Showing little sign of battle fatigue, Lawson brogued, “there’s no ice in this place.”

With rockets in such easy reach of civilian artists (note the sing-song refrain on Little Italy and Chinatown street corners, “Fire-works, Fireworks”), the Oppenheim precedent could bode a firey future for New York’s art world. Openings that have calmed down to brackish white wine and fashion jabber from the good old lip-splitting days of the Brash-stract- Expressionists, could explode overnight. Gun-powder is cheaper than canvas. Who needs broken plates or second-hand antlers?

This entry was posted in Articles and tagged Bonlow Gallery, Dennis Oppenheim, Soho. Bookmark the permalink.