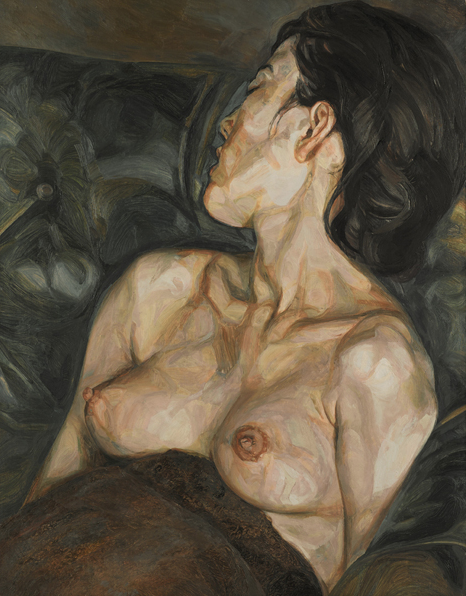 Though pinched by a trio of high-value works withdrawn from the auction by nervous sellers at the 11th hour, Sotheby’s Contemporary Evening Sale triggered some bidding fireworks on a few star lots and tallied £69,461,000/$100,447,552.

It lagged far behind last February’s strong Contemporary Art Evening Sale that made £123.5/$188.2 million and came in with a trim 12 percent buy-in rate by lot, representing a precipitous drop of 44 percent.

(All prices reported include the hammer price plus the added on buyer’s premium for each lot sold calculated at 25 percent of the hammer price up to and including £100,000, 20 percent of any amount above that up to and including £1.8 million, and 12 percent for any amount in excess of that. Estimates do not include the premium.)

“There was a lot of uncertainty coming into the sale,” said Hess as she made a beeline for the exit, “but I think it was a good sale.”

In striking contrast to those abstraction infused works, Adrian Ghenie’s figurative styled “The Sunflowers in 1937” from 2014, a historical commentary in part on the National Socialists’ propaganda and exploitation of Entartete Kunst/Degenerate Art, including that of van Gogh, the work he reprised, sold to a telephone bidder after a ferocious bidding battle for a record £3,117,000/$4,507,494 (est. £400-600,000). It crushed the mark of £1,426,500/$2,439,712 set by “The Fake Rothko” from 2010 in June 2014 at Sotheby’s London. Among the large posse of underbidders was Paris/Salzburg dealer Thaddaeus Ropac, who bought an Anselm Kiefer work later in the sale.

Ropac was unhappy that the Ghenie found its way to auction, since the buyer had apparently promised it would go to a museum when it was acquired on the primary market at Galerie Judin, Berlin in 2014. “It’s one of his best paintings,” said Ropac, “and I’m definitely not happy it went to auction so fast.”

The results weren’t so pretty on the American side, as Andy Warhol’s eerie Death & Disaster series painting “Little Electric Chair” from 1964-65, executed (ha!) in silver paint and silkscreen ink on canvas, and at one time in the collection of Philip Johnson, bought in at a chandelier bid of £3.4 million (est. £3.5-5.5 million). The same fate greeted Warhol’s two-foot square “Flowers” from 1964, when it wilted at £1 million (est. £1.3-1.8 million).

Similar to the top lot Pablo Picasso “Tete de Femme” that sold last week at Sotheby’s London Impressionist and Modern Sale, it took a steep price beating from what it fetched just two years ago.

Two other Basquiats were withdrawn by their owners from the sale in what one might surmise as a lack of confidence in the outcome.

Not unexpectedly, the pre-sale buzz around the stunning Lucian Freud painting “Pregnant Girl” from 1960-61, depicting his teenage lover, Bernadine Coverley, sleeping with her head in profile, triggered a marathon bidding battle eventually won by a telephone bidder at the top lot price of £16,053,000/$23,214,243 (est. £7-10 million). Among the crowd of at least nine bidders, both in the room and on the telephone banks, was London dealer Pilar Ordovas.

Though it sounds like a pittance today and has zero bearing on its current high net worth, the Freud last sold at Sotheby’s London in May 1983 for £44,000.

Former YBA star Damien Hirst’s sleek and stainless steel clad “In Search of Nirvana,” a 2007 iteration of an open medicine cabinet and comprised in part of colored plaster and painted pills meticulously arranged on an altar-like high-rise of shelves, sold shy of the low estimate for £1,205,000/$1,742,550 (est. £1.3-1.8 million).

What was expected to be the highlight of the evening came to naught as Gerhard Richter’s large-scale “Abstraktes Bild (725-4)” cover lot from 1990 was withdrawn from the sale by the seller. Never before at auction and acquired from the Marian Goodman Gallery in New York in 1996, no one could argue against its fresh-to-market status or authenticity, recorded by Dieter Elger in volume four of the Richter catalogue raisonne. It also stayed with Richter from the time it was painted to when it came to market, adding further allure. Unencumbered by any financial guarantee, the masterfully squeegeed, 88 ½ by 78 ¾ inch painting would have come “naked” to the salesroom but, alas, that didn’t happen (est. £14-20 million).

In one of only four financial guarantees in place for the evening, Kazuo Shiraga’s Ab-Ex inspired abstraction “Koujouka” from 1990, imploded with thick brushstrokes in burning shades of yellow and red, sold for £1,565,000/$2,263,146 (est. £1.2-1.8 million). It was acquired by the seller at Shiraga’s exhibition held last February at the Mnuchin Gallery in New York, a rather quick turnaround.

While portions of the sale tonight appeared flat, there’s plenty of money at hand when desired, as evidenced by Ai Weiwei’s storied, large-scale editioned photograph in three parts, “Dropping a Han Dynasty Urn” from 1995-2004, which sold for £755,000/$1,091,806.