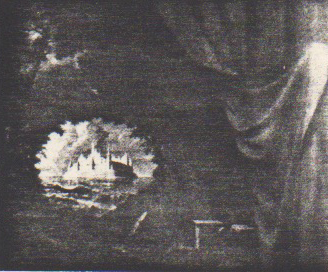 In a tailored tongue-in-cheek coincidence, the conceptualist duo, Vitaly Komar and Aleksandr Melamid, exhibited their paintings in New York on the 65th anniversary of the Russian Revolution. Both artists are Russian emigres whose work first appeared in the West in 1976, passing the cold eye of Russian Customs who believed the smuggled canvases were tablecloths. Before they receivedU.S. permanent residence status as “particularlyimportant figures of international reknown in science and culture:* Komar and Melamid were youthful stars of the Soviet Union of Artists. It didn’t take long for their pop (read “Sots”) art and Kafkaesque parodies to be branded as “distortions of Soviet reality” and their honeymoon in the arms of Social Realism (a term coined by Maxim Gorky) ended in a blast from water cannons manned by Soviet police in 1974.

Draped in this context, View of the Kremlin in a Romantic Landscape, apes the Party line that landscapes are permissible only if they show the countryside in “Socialist transformation.” Somewhat like a tiger on a gasoline commercial bursting through a burning hoop, the copper-domed spires of the Kremlin are viewed through a keyhole of boughed foliage. The walled city is marooned Fantasy Island-style, with lighting and cotton-wool clouds befitting a Walt Disney cartoon. Chunks of carved stone litter the leafy foreground, punny reminders of lost civilizations. A billowy, blood-red curtain dominates the right side of the painting, with luscious folds transplanted from the hemlockstained frock of Socrates in David’s painting.

The pictures are deliberately dark, as if they’d been hanging in benignly neglected bliss for centuries. The gooey frosting of varnish and considerable underpainting show off the duo’s classical tricks, for they were gifted academy students. They hunt and peck in the postmodern style, quoting from sundry sources such as Caravaggio, the Le Nain brothers, and even Andy Warhol. Lenin, Stalin and Khrushchev toy with peasants, generals and muses. Komar and Melamid’s deliciously clever humor manages to ridicule and condemn the ghastly fumes soviet repression.