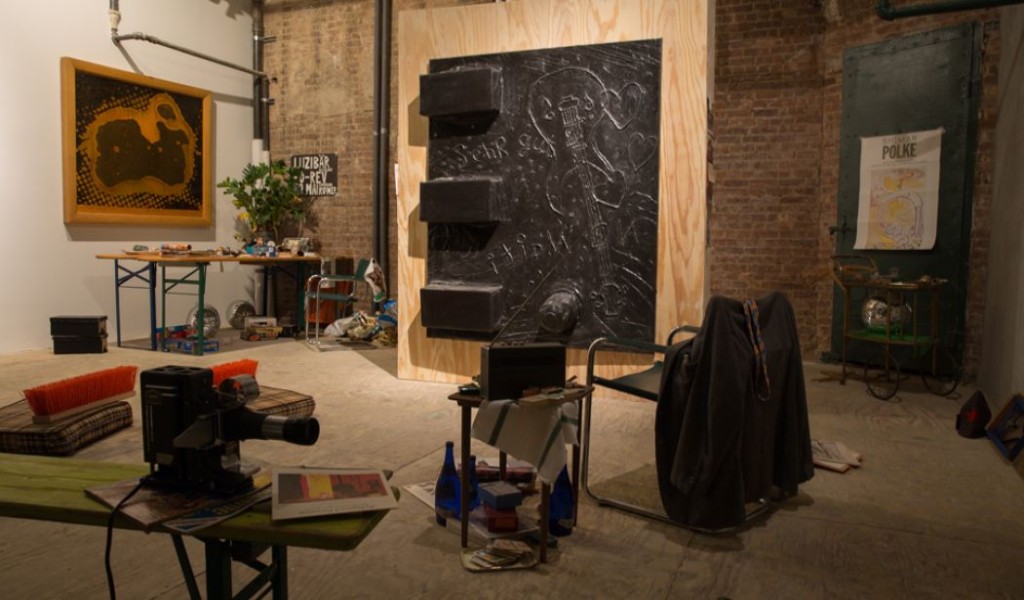 Shin Gallery’s pop-up exhibition “Sigmar Polke and Martin Kippenberger — Ja, Ja, Ja, Nee, Nee, Nee,” at the 66 Orchard Project space on the Lower East Side, is a must-see adventure for art market savvy viewers (through June 30). The storefront enterprise, situated on a block mostly devoted to vintage shops and vaguely trendy bars and cafes, could easily be missed, apart from the names of Polke and Kippenberger scrawled across the bombed-out looking shop window.

There’s no written or imagined explanation of the Polke-Kippenberger pairing (both works are on loan from “private collections”), apart from their posthumous art market stardom, though Kippenberger greatly admired the elder Polke for his buccaneering, experimental style. A gallery sitter mistakenly asserted that Kippenberger was a student of Polke’s, but that’s not the case, at least according to Kippenberger’s CV, which notes 16 semesters logged in the 1970s at the Hamburg Art Academy. A Kippenberger-Albert Oehlen pairing would have made more art historical sense and would have been perfectly timed, given that Oehlen’s retrospective is about to open at the nearby New Museum, but that’s another story.

The exhibition is neatly cluttered with all sorts of eBay sourced cultural detritus, ranging from punk rock album covers and German art posters and magazines to now-antique cameras. It has the copycat but low-budget flavor of recent and wildly more ambitious undertakings, such as “The Collector” at Helly Nahmad’s stand at Frieze Masters last October, which chronicled the life of one Corrado N., living in a small, art packed modernist apartment in Montparnasse, circa 1968.

What’s most interesting about the Shin show are the works themselves: Kippenberger’s “Untitled” from 1991, measuring 71.1 by 59.3 by 9.8 inches and comprised of latex, plastic, and acrylic on canvas and Polke’s mixed media on fabric abstraction, “Different from Case to Case” from 1998, measuring 51.25 by 59 inches.

The Kippenberger is more prominently placed in the center of the chaos, a rubbery, black-coated relief with the etched outline of an electric guitar pointing down and the words “sehr gut” (translating to “very well” or “damn good”) beside it. The painting last sold at Sotheby’s London in October 2014 for £194,500 ($312,851), a month before Kippenberger’s “Untitled” from 1988, from the artist’s revered self-portrait series inspired by a famous photograph of Picasso posed in white underpants, made a record $22.5 million at Christie’s New York. (In a kind of kitschy homage to that series, a pair of extra large white underpants is pinned to the backside of the unpainted plywood wall the painting hangs from.) This example, from the artist’s so-called “Latex Pictures” series, was included in the important MOCA/MoMA traveling exhibition “Martin Kippenberger: The Problem Perspective,” from 2008-09.

The Polke, in contrast, is almost hidden behind a cluttered table, though its visual power, even in low-level light, attests to the artist’s still decanting genius. This work also carries an important provenance, having been exhibited in the critically applauded “Sigmar Polke: History of Everything — Paintings and Drawings, 1998-2003” exhibition at the Dallas Museum of Art in 2002-03. The DMA exhibition catalogue identified the lenders as Tom and Charlotte Newby, prominent contemporary art collectors from Chapel Hill, North Carolina. The petri dish looking shape of the Polke, rendered in an alchemical shade of gold and set against enlarged “Polke-Dots,” a takeoff on mistakes generated from mechanical printing, dominates the found polyester fabric painting.

What makes 66 Orchard Project extremely interesting is the background of the Shin Gallery, which occupies a street level gallery space on the nearby corner of Grand and Orchard Streets and is largely devoted to showcasing contemporary Korean artists. The gallery owner, 20-something Hong Gyu Shin, was one of seven bidders on the record-breaking Francis Bacon triptych, “Three Studies of Lucian Freud” from 1969, which sold to Elaine Wynn at Christie’s New York in November 2013 for $142.4 million. Bidding in full view near the front of the salesroom, Shin was quoted in press reports as competing up to $124 million, three million dollars shy of the achieved hammer price before premium. Given this dramatic background, it will be fascinating to see what else will pop up at the 66 Orchard Project.