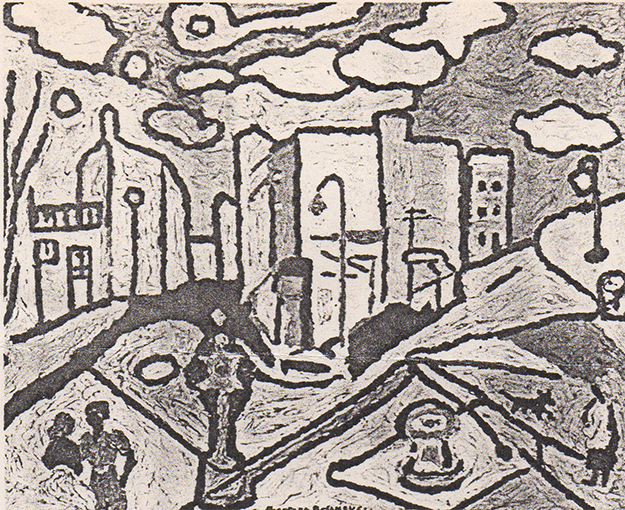 When Beauford Delaney died in the Spartan confines of a Paris psychiatric hospital on March 26th at the age of 77, a bureaucratic tug-of-war was taking place a-cross the Atlantic over the destiny of hundreds of the artist’s paintings.

The sparring began when the Studio Museum in Harlem decided to mount a retrospective of Delaney to inaugurate its ambitious Black Masters’ Series. The French government had impounded his work and sealed his studio on Rue Vercingetorix since Delaney’s financial affairs were in shambles and his hospitalization was paid for by the state. After a flurry of snipping Bordeaux red tape and thousands of dollars to settle delinquent ac-counts, the Studio Museum was able to ship the works to New York on a 30-month loan. Exxon Corporation and the National Endowment for the Arts funded the retrospective.

Sixty-seven works were dis-played from April to July 1978, the lion’s-share belonging to the French with a dozen or so canvases on loan from the Galerie Darthea Speyer, a long-time supporter of Delaney The New York Times found room for a few para-graphs, but otherwise the run was confined to enthusiasts who journeyed up to 125th and Fifth Avenue.

Bursts of color and a detailed menu of light graced the signature of the artist’s brush-strokes. Portraits of friends—musicians, writers, and painters—and abstract compositions forming a hymnal to light created an unusual tension between figurative and abstract. Titles like Portrait of a Man in Soft Light Faded Light, Light Seeping Through, Cool-Blue-Green Light under-scored Delaney’s devotion to that ephemeral phenomena.

In a smouldering introduction to a one-man show at the Galerie Lambert in 1964, James Baldwin wrote of his friend and mentor- “I learned about light from Beauford Delaney the light contained in every thing, in every surface, in every face. Many years ago, in poverty and uncertainty Beauford and I would walk to New York City He was then, as he is now working all the time, or perhaps it would be more accurate to say that he is seeing all the time; and the re-ality of his seeing caused me to begin to see…”

James Baldwin was not the only literary giant to swoon over Delaney’s talents. In the famous New Directions tome, Remember to Remember, published in 1941, Henry Miller christened his new acquaintance “the amazing and invariable Beauford Delaney” and wrote: “This night I speak of Beauford showed us, I remember, some small canvases of street scenes. They were virulent, explosive paintings devoid of human figures in-vested with color, mad with color They were full of remembrances too, and solitudes. In the empty street from which, by the way, there seemed no egress, a spirit of hunger swept with devastating force. It was a hunger born of remembrance, the hunger of a man alone with his medium in the cold storage world of North America.”

Poverty cold, and solitude shadowed Delaney’s footsteps thoughout most of his long life. He left behind a string of one-man shows at the Roko Gallery in the Village and a fellowship at the Yaddo Art Colony in Silver Springs. New York. When asked in Paris if he was an expatriate, Delaney retorted: “One must belong before one may then not belong. I belong here in Paris. I am able to realize my-self here. I am no expatriate.”

In 1962 Paul Jenkins wrote in a review that appeared in Art International: “Beauford Delaney wanted to whip the sea itself and then take on all the land surrounded by water ” Jenkins compared the artist’s work to Soutine and Van Gogh (heady company for the Tennessee-bred son of a Baptist minister) and described his brushstrokes “like furrows in a field.”

The artist had endured stints as a bellboy in a New York hotel, a custodian for the Whitney Studio Galleries when it was still downtown, and a 1938 Life magazine feature on “Negroes,” picturing the artist amidst his wares in a Washington Square Art Fair Not to underestimate the difficulty of survival for a black artist in New York, Delaney had some of his canvases hanging in the apartment of an uptown collector but was unable to use the passenger elevator in the same building when he was invited for tea. He had shown pastels at the Whitney before stoking coal for the institution—a perfect Ralph Elli-son-Invisible Man metaphor.

Between bouts of obscurity and all too brief highs of a one-man show or an unsolicited $5,000 grant from the National Council of the Arts, Delaney managed a prolific pace. Since Beauford’s untimely death (his younger brother, Joseph, also a painter had planned to visit him in April), the scramble for his work has intensified. The French government, anxious to close the tangled file on the artist, had planned to auction off the warehouse-bound works and notified the Studio Museum that they no longer were responsible for the paintings. A Paris court order that had designated guardianship over the incapacitated artist to Par-is-based friends—James Bald-win and Bernard Hassell—was rescinded and the surviving Delaneys (Joseph in New York and the eldest brother Samuel in Knoxville ) now bear the burden of liberating another warehouseful of Beauford’s prodigious output. At this juncture there remains another ample portion of unaccounted for paintings that dis-appeared during the chaotic period when the Rue Vercingetorix studio was cleared out. The documentation for the Studio Museum show spearheaded by guest curator Richard A. Long is only the tip of the iceberg.

With Henry Miller, James Baldwin, and the late James Jones singing the romantic praises of Delaney while fellow visual artists Georgia O’Keeffe and Paul Jenkins tout his mesmerizing horn, Beauford Delaney remains a tantalizing enigma to the all too color-conscious art historians. He has eluded history for the moment. One or two surviving warehouses of his art will be enough am-munition to spark a sorely needed historical revision.

A last note from Baldwin: “Perhaps I should not say flatly, what I believe—that he is a great painter, among the very greatest; but I do know that great art can only be created out of love, and that no greater over has ever held a brush.