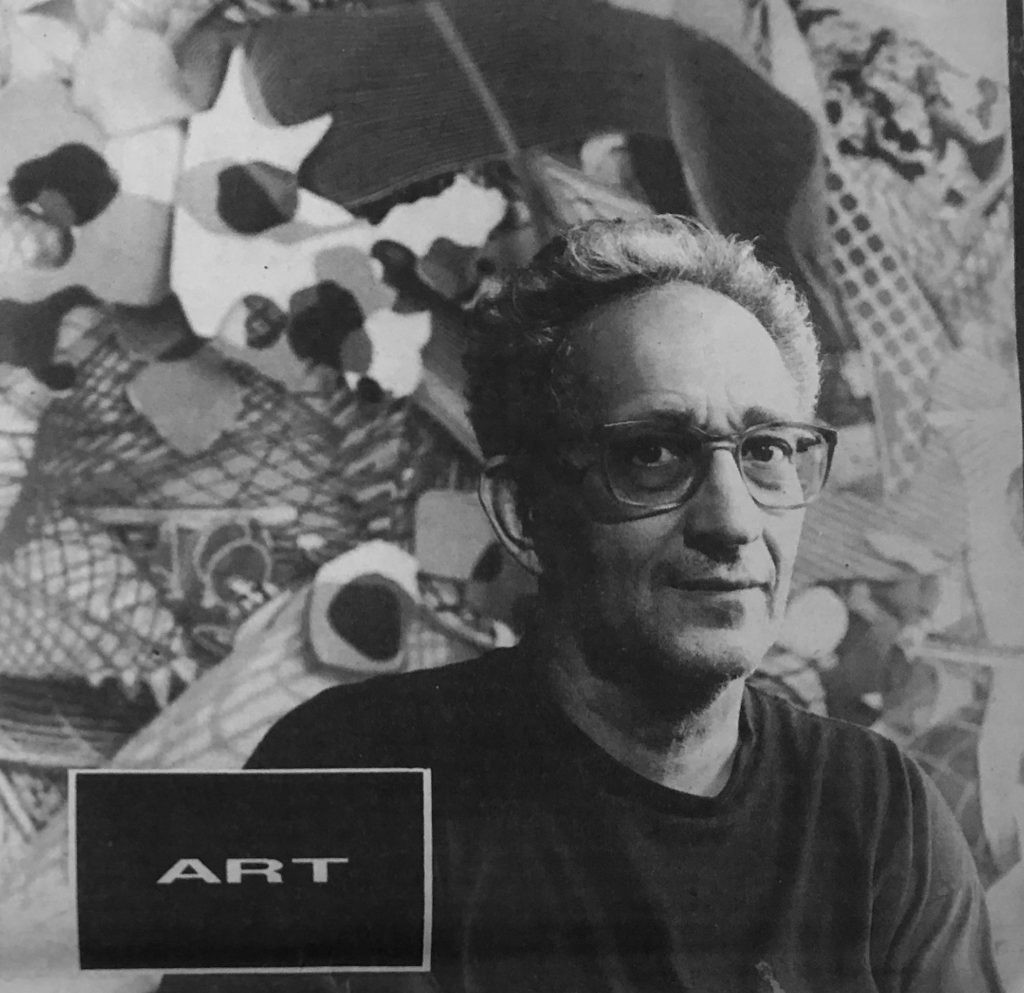 With the stub of an unlit cigar in hand, Frank Stella is pacing back and forth in his mammoth studio near Union Square. The architecture of the place and the din going on inside it is a bit overwhelming. A former auction house/stable for horses in the 19th century, the interior now resembles a kind of duplex-laboratory belonging to a mad scientist. Stella calls it his “debris d’atelier.”

Huge abstract paintings, their images in part computer-generated from the shapes of blown cigar smoke rings, hug some of the walls on the second tier of the space. A camera crew is setting up skirted lights to shoot several of Stella’s mural-sized paintings that recently returned from a show at the Waddington Gallery in London.

On another wall, a huge mock-up collage of a potential mural project for the lobby of a new Singapore office building designed by Kevin Roche, imparts the illusion of jumping of the wall. Phones are ringing, strobe lights are pop-popping and Stella is talking to his visitor with the focused cadence of someone at home with chaos.

A jerry-built, canvas-covered form stands nearby a disparate group of so-far unrealized architectural models. Stella strides over to the curved form, the mod-el of Knoedler’s intenor, poking the taut surface of the fine-spun canvas. “This is the gallery,” the artists says, referring to Knoedler’s elegant space on East 70th where Stella will shortly install his new creation. “We’re putting on a wall shaped like this. It will go floor to ceiling in the gallery.” The idea of a painted, free-standing architectural form temporarily installed in the gallery, slowly seeps in but it’s still daunting to fathom.

Asked if he had ever done this sort of pre-fab installation for a gallery show, Stella giggled mischievously and said, “no, no, no. We’ve never done it anywhere.”

“It” at the moment was being worked on in Toronto by Stella’s Canadian crew in a studio he’d set up for his biggest art project to date, the new Princess of Wales Theatre where “Miss Saigon” is playing to packed houses. Owner and former art dealer. David Mirvish commissioned Stella to “decorate” the $22 million theatre and it is considered the world’s largest theatrical art installation since Chagall’s work on the Paris Opera House, That, of course is another story but one delicately intertwined with Stella’s risky, high-stakes style of pushing the abstract painting envelope.

Reminded of how some of his recent shows at Knoedler looked as if the painted and shaped wall reliefs were shoehorned into the space, Stella laughs again and says, “this is probably going to be way too big.” By Stella’s casual recall, the painting on fiberglass sections will cover approximately 30 square feet. Almost anticipating the next question, the artist says, “this will be a more difficult show to sell but things are difficult anyway so it doesn’t matter too much.”

Since the gallery project got started last June, Stella has shuttled back and forth from Toronto, directing the action of young assistants there as any old master would have done in the Renaissance. “It’s an extension of the dome we did in the Toronto theatre,” explains Stella, “using the idea and shaping the surface so it’s a kind of complex surface instead of just a flat one.”

Pressed to explain what his new paint-ing will look like, the artist shoots an appraising glance at his visitor and says., “1 don’t know. It all starts out pretty much the same with imagery form the smoke rings and these colored dots from printed papers and whatever else comes into, So it’s a collage and then the collage is sort of painted, rendered so it has a little shadow and sort of depth, You see that in the painting as Trompe-l’œil It’s a shallow space which has a little illusionistic space inside of it.”

Stella, famous long ago for his striped and then shaped canvases, is onto a new and so far, uncharted trail where architecture and painting fuse. “I see the combination of a shaped space and illusionistic painting being kind of interesting,” says the artist in his utter stated was. “We haven’t seen that.”

You can go and see firsthand what he’s talking about through November first.