Skip to contentSkip to content
Artnews
‘It Takes Time to Prove Yourself’: Joseph Nahmad on His New York Gallery’s Fifth Anniversary
June 12, 2018 by Judd Tully 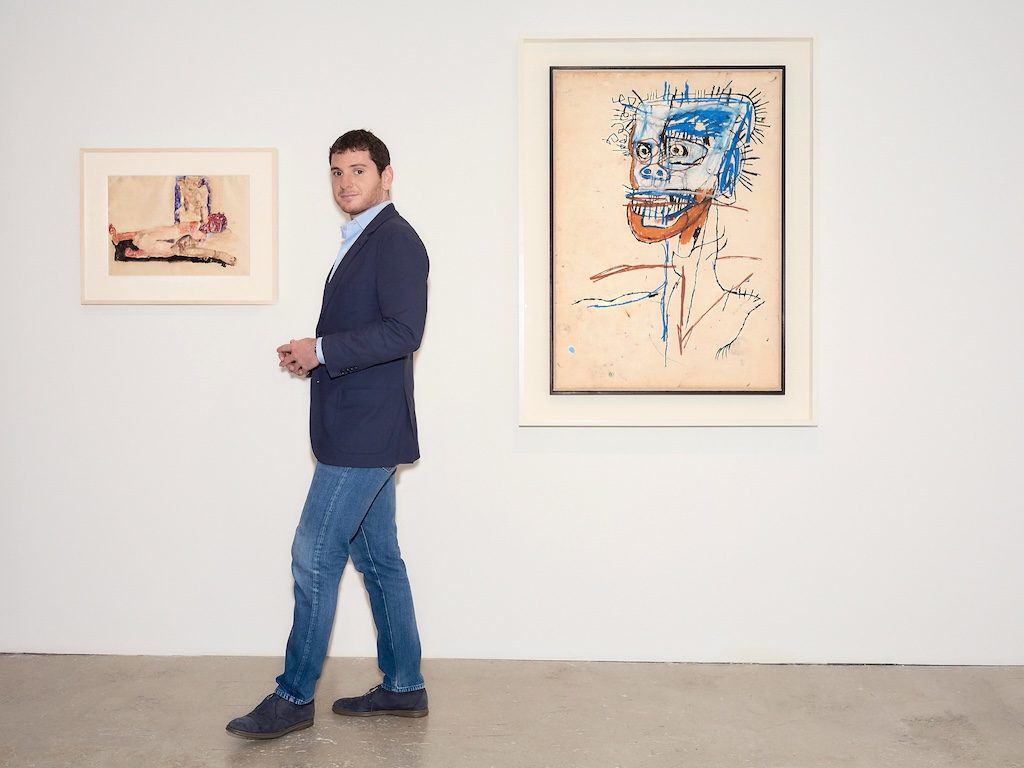 Joseph Nahmad, the 28-year-old scion of the powerhouse family that is synonymous with high-end trading in the field of Impressionist and modern art, just celebrated the fifth anniversary of the opening of his New York gallery, Nahmad Contemporary, with an exhibition and catalogue tracing the 22 shows he’s mounted since 2013. In an interview with ARTnews, the Manhattan-bred dealer spoke about his program and background, seated for the most part at his backroom desk at 980 Madison Avenue, down the hall from Venus Over Manhattan, just below Gagosian gallery, and across the street from the gallery of his brother Helly Nahmad. A 12-foot-tall Urs Fischer aluminum panel composition of a Hollywood starlet from the artist’s “Problem Painting” series dominated a wall in the tastefully appointed, book-lined room.

ARTnews: What are the pluses and minuses of being part of a family-run art-trading empire?

Joseph Nahmad: Well, of course, there are plenty of advantages. On the one hand, it’s easier to get loans, and I have a family name that’s very well known. However, on the flip side, you have to work extra hard to earn respect from colleagues and artists, and collectors, and everyone really. That doesn’t happen overnight. It takes time to prove yourself, especially in a kind of family business. It’s hard to make your voice heard and I was able to create my own entity, my own gallery, my own business, and really, there was a very clear opening into the sector of contemporary art, which my family had largely stayed away from, basically for the last half-century.

ARTnews: You told me that your father, David Nahmad, took you to your first auction at age five. Does he give you advice, or has he ever said to you, “Joe, that’s a horrible idea”?

Nahmad: He never says it’s a horrible idea. He likes certain shows more than others, especially the artists that he relates to, so when I told him I was going to do Hans Hartung [in 2018] or Antoni Tàpies [2017], he was very excited because these are artists that he’s collected forever. To see that resurgence in their markets, or reactions from curators, that makes him very proud.

As far as advice as a dealer, he’s given me plenty, in the way to work with clients, a way to stay focused and to collect, and just everything you need to know.

ARTnews: So is it fair to say you’re following in your father’s footsteps?

Nahmad: The differences are he’s more of a collector and a long-term investor and I view myself as more of a gallerist, and while he has built some great collections, he was very focused on building his own. One of the goals of this gallery, and of what we’ve been doing, is building collections for others. We have several clients that really follow us and our program, and buy a work from each show. I find that exciting.

ARTnews: Are your clients more of your generation or—?

ARTnews: What dealer, then, past or present, has been an inspiration for you?

Nahmad: There’s no question that the dealer that I most respect and emulate is Ernst Beyeler. I think what he was able to build is just incredible.

ARTnews: Your first show was with Sterling Ruby and his spray-paint works, and you’ve devoted two exhibitions to Richard Prince and one to Jean-Michel Basquiat, with another Basquiat show focusing on his Xerox and collage works on paper coming early next year. What is your program chiefly about?

Nahmad: I thought about starting a program with artists that are younger and developing their careers and representing them in the traditional way, but what I’m very interested in is established contemporary artists, and historicizing certain bodies of works that I’m very much drawn to, and then being focused on those series. For instance, Richard Prince’s “Monochromatic Jokes,” which I think are some of the most iconic paintings of the last 30 years. That is something I believe in and that I will continue to be involved with for my entire career, hopefully.

My focus has been doing historical exhibitions and picking out certain bodies of works which might be less known to the public or which might be under-appreciated. Publishing catalogues was also one of our goals. That was definitely something we set out to do and artists respect that we’re adding scholarship.

ARTnews: Don’t some of your exhibitions go back farther in time and definitely carry a Nahmad family ring? For example, you’re currently showing an Egon Schiele from 1911, and a Gustave Moreau from 1885 was in your “Les Fleurs Du Mal” exhibition in 2016.

Nahmad: When I exhibit artists that my family has been associated with, it’s really to create a new perspective and context, such as with the late Miró exhibition [“Joan Miró: Oiseau Dans L’Espace,” in 2015]. The point was to try to contemporize those paintings, and to show them in a program where we’re exhibiting contemporary artists—or with Fontana, and Burri and the Italians, to juxtapose them with artists such as Rudolf Stingel.

ARTnews: Are you reconsidering representing artists?

Nahmad: While I don’t represent artists, I do speak with the artists that we show. We are building good relationships and the plan is to get more and more primary material to sell. I think in today’s age, where artists aren’t necessarily signed to a gallery and are being more independent, it makes it easier to do, and if a certain body of work makes sense in the context of this program, then maybe I’ll have access to some of the work. We would like to go in that direction and get new work to place in collections.

ARTnews: Do you see a lot of speculation in today’s contemporary art market?

Nahmad: There’s a ton of speculation, like in any marketplace, and I think you try to avoid that if you’re a younger artist. I mean, you see it at the beginning of the auction catalogues—there’re always these hot, young artists, and then, unfortunately, they go from being at the front of the catalogue to the back of the catalogue, and then they’re not in the catalogue at all. Then every several years, there’s a whole new batch.