Strong demand, further enhanced by financial guarantees that insured success for top lots in the salesroom animated the action on Tuesday and Wednesday at Sotheby’s, Phillips and Bonhams.

Significantly, and for a second year, market leader Christie’s has opted out of the June sweepstakes, a move that in hindsight appears rather foolhardy in such a hungry market.

The kick-off on Tuesday evening at Sotheby’s was notably impressive, with just one of the 44 lots offered failing to sell for a skinny buy in rate by lot of two percent.

That said, a whopping twenty-five of the 43 lots that sold were backed by either irrevocable bids, also known as third party guarantees, solo house guarantees or combinations of the two, including the week’s top and cover lot Lucian Freud’s late, full figure reclining nude, “Portrait on a White Cover” from 2002-03 that fetched £22,464,300/$29,830,344 (est. £17-20 million).

Never before at auction, it snared the highest price for a Freud sold in London, ranking it fourth in terms of Freud’s auction prices, and still far behind “Benefits Supervisor Resting” from 1994 that made a record $56.1 million at Christie’s New York in May 2015.

Another auction newbie, it was part of an eleven lot trove cherry picked from a private New York collection tagged and heavily marketed by Sotheby’s as “New Wave New Beat.”

The seller, “Lord of the Rings” film producer Michael Lynne acquired the Basquiat on the primary market from the Tony Shafrazi Gallery in SoHo in 1998 during the artist’s solo there and hats off to a cinematic eye.

The seller acquired the Doig from the Victoria Miro Gallery in London in 1999 and is the 19th Doig painting to sell for over ten million dollars at auction.

Though hardly a major work, Francis Bacon’s burly, bare-chested and convincing “Study of a Figure” from 1954 and formerly in the Italian auto magnate Agnelli Collection, sold without benefit of any guarantee for £3,010,000/$3,996,979 (est. £3-4 million).

Sotheby’s identified the anonymous telephone buyer as an Asian collector.

Gilliam’s paintings were all over the recent Art Basel art fair and eliciting raves for his ongoing exhibition there, “The Music of Color” at the Kunstmuseum Basel, his first European solo exhibition.

The scene shifted to Phillips’ sleek Berkeley Square headquarters on Wednesday evening and a ‘White Glove,” as in 100 percent sold auction that garnered £34.4/$45.2 million and like its much bigger rival, bettered last June’s performance of £24.3 million by a margin of 41 percent.

The major excitement, at least in terms of bidding, was the slug fest over Martin Kippenberger’s late and raunchily stunning ‘Untitled (Raft of Medusa)” from 1996, featuring the artist’s nude and supine self-portrait, that fetched the top lot £8,446,500/$11,092,788 (estimate on request).

Applause greeted the final bid as auctioneer and head of sale Henry Highley slammed the gavel down.

It was sold by the noted French collector Marcel Brient who acquired the 59 by 70 7/8 inch painting in 1998 from Galerie Samia Saouma in Paris.

No stranger to the auction rooms, Brient sold a group of contemporary works at Sotheby’s Paris in 2012 for $6.6 million and another tranche of material at Sotheby’s New York in May 2015 for $11.2 million

“Philips and Sotheby’s evening sales were tightly composed, 30-40 lots with a few notable works and the rest a mixed bag. While June seemed to be eroding on the auction calendar, the success of these auctions demonstrated the demand of a hungry market. I suspect that after a few more contortions, Christie’s will reclaim this space. For sellers at auction, there’s not another opportunity until November, and I think the market’s moving faster than that.”

The painting debuted at Basquiat’s Mary Boone Gallery solo in 1984.

It most likely sold to the third party guarantor, given the low-wattage bidding. 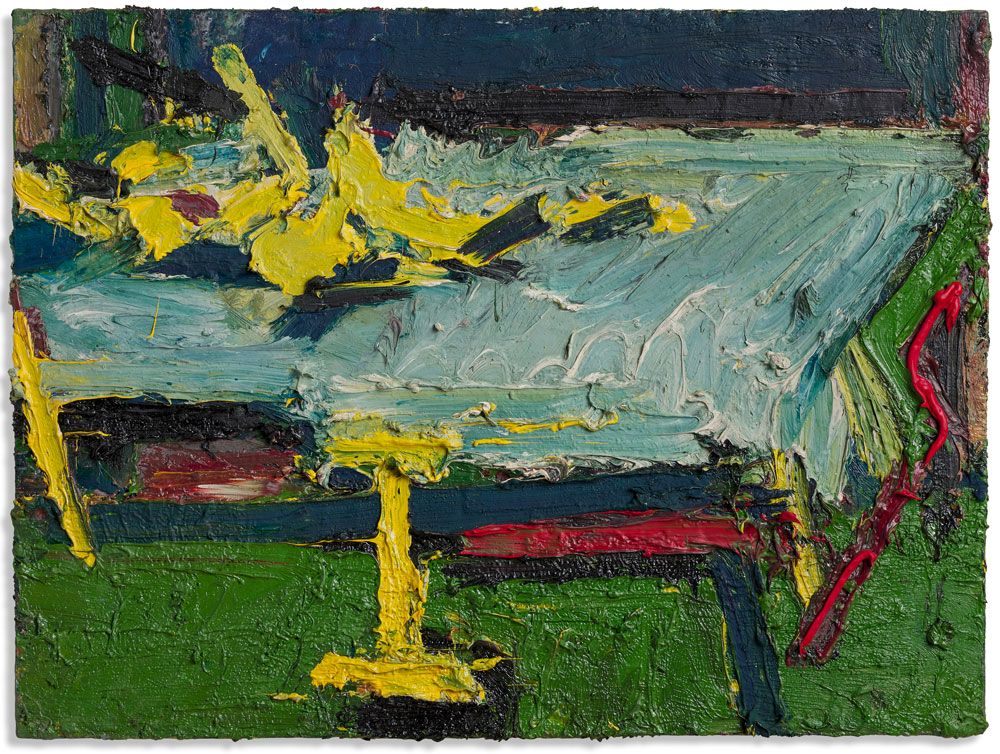 Five of the 30 lots offered failed to sell for a crisp buy-in rate of 14 percent.

The trio of sales left one question hanging in the summer air: where was Christie’s?