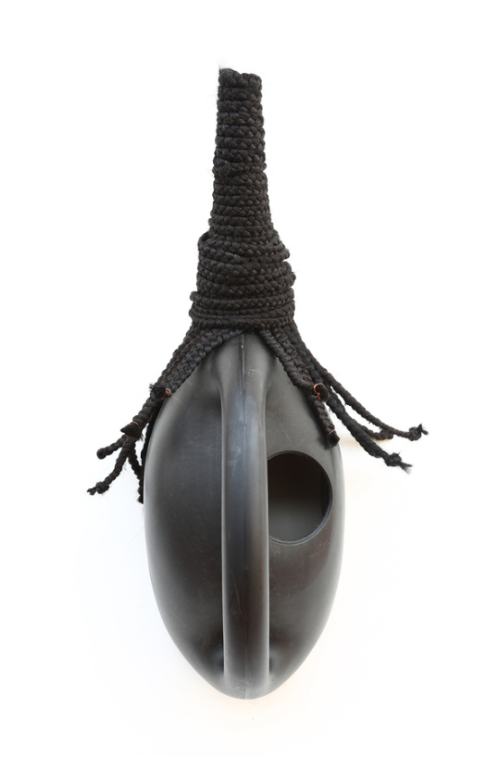 In a change of pace from six and seven figure offerings, Fair Warning, the newly formed app for collectors, sold West African artist Romuald Hazoumè’s mask-like wall sculpture “Chou Chou” from 2013 for a record $69,000 on Thursday, easily vaulting past the pre-sale estimate of $20-30,000.

The found object amalgam of a black plastic jerry can, synthetic hair, nylon and metal wire, repurposed as a kind of contemporary African mask, demolished the record set in the single owner David Bowie/Collector sale at Sotheby’s London in November 2016 when “Alexandra” (undated) sold for £25,000/$31,501 against a £5,000-7,000 estimate. 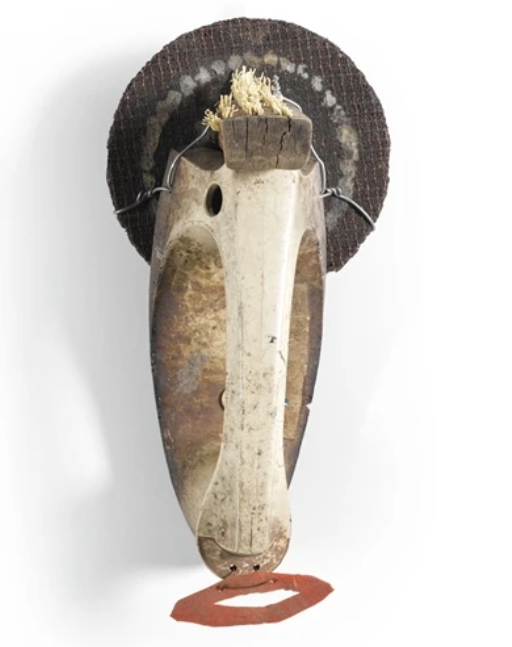 (Bowie had acquired the work at the first Johannesburg Biennial in 1995, as well two other Hazoumè masks, “Miss Johannesburg” and “Miss Pretoria” that sold in the same single owner sale for £15,000 each.) 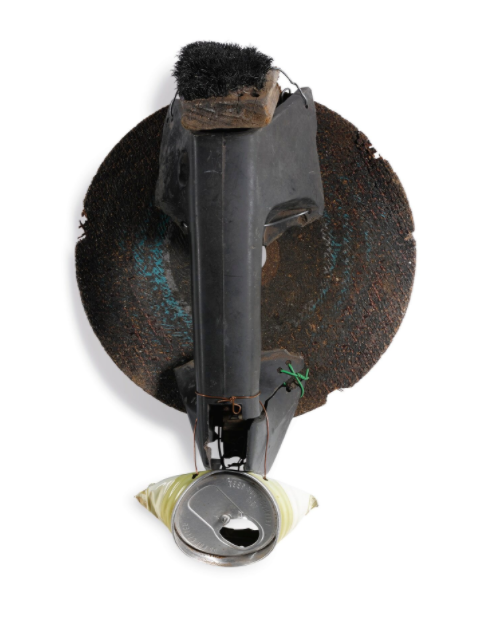 Hazoumè, a Yoruba artist from the Republic of Benin and the capital port city of Porto-Novo, is not a widely known figure in the New York art world, apart from three works in MoMA’s collection gifted by super collector Jean Pigozzi as part of his donation of 45 works in 2019 and a solo installation at Gagosian Park & 75 outpost in the fall of 2018 where a group of his jerry can based masks were displayed.

The gallery press release from 2018 quoted Hazoumè: “I send back to the West that which belongs to them, which is to say, the refuse of consumer society that invades us everyday.”

In part Duchampian, and richly evocative with cultural traces of Mel Edwards’ “Lynch Fragments” and El Anatsui bottle cap and copper wire tapestries, the sculptures dwell on the illegal trafficking of gasoline between Benin and Nigeria, with the found object jerry cans forming the template of Hazoumè’s powerhouse, transmogrifying work.

The artist gained international recognition at Documenta 12 in 2007 with his stunning installation, “Dream,” comprised of a photo mural backdrop of a tropical coast and a full scale, 45 foot long boat made up of the plastic canister jerry cans, glass bottles, corks, cords, letters and photographs and which spoke to the dream of local people attempting to escape their desperate situations by migrating to Europe, an equally fraught and life threatening gamble.

Hazoumè won the Arnold Bode prize that year in Kassel, a Documenta that thematically addressed “the migration of forms” and elevated his stature on that important world stage, one shared by Ai Wei Wei who exhibited 1,001 Qing Dynasty Chinese chairs in the same pavilion.

Hazoumè’s oeuvre focuses on the exploitation of African resources, both natural (oil) and human as further evidenced by his outstanding 2007 piece, “La Bouche du Roi” that was exhibited at the British Musuem in 2007 to commemorate the Slave Trade Act of 1807 that prohibited slave trading in the British Empire.

Hazoumè crafted a found object reprise of the infamous slave ship Brookes, the vessel that caused a frightful stir beginning in 1789 when a print of its packed interior, showing the layout of its chained human cargo, illustrated the horrors of that profit making trade.