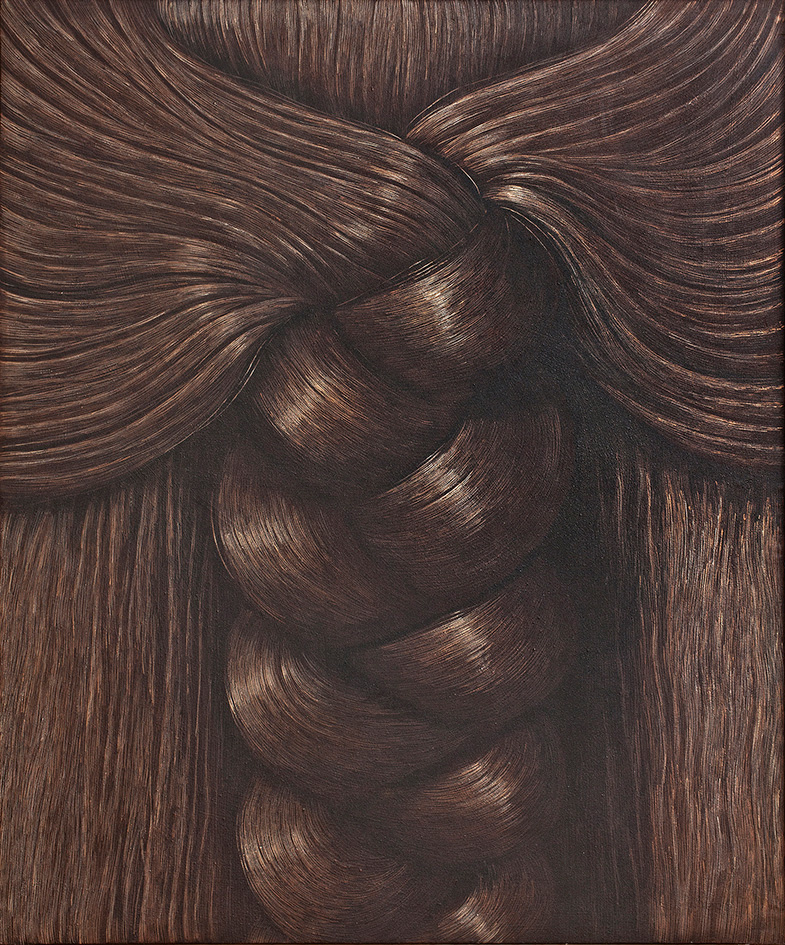 Friday turned out to be a red-letter day for Art Basel newcomers London/New York’s Luxembourg & Dayan when they sold the rare to market Domenico Gnoli figurative painting, “Braid” from 1969 in the region of the $14 million asking price.

The 71 by 59 inch canvas depicts a startling close-up of a woman’s luxuriant coiffure, as if the viewer had a topographic, zoom lens view.

The painting, a stunning blend of Pop Art and Surrealism and executed in acrylic paint and sand on canvas, debuted in the artist’s first exhibition in the U.S. at the Sidney Janis Gallery in 1969, at the time a storied New York gallery.

Gnoli died the following year at age 36 of cancer, leaving behind an oeuvre of just 150 paintings.

Luxembourg & Dayan staged a solo show of Gnoli’s work at its Upper East Side townhouse gallery in 2012 with 18 paintings, the first exhibition of his work in more than forty years.

The selling price of “Braid” walloped the artist’s auction record set at Christie’s London in February 2014 when “Black Hair” from 1969, comprised of the same medium of acrylic and sand on canvas and measuring 66.9 by 59.1 inches, fetched £7/$11.7 million against an estimate of £1.2-1.8 million.

Though still not widely known, four of Gnoli’s works have sold for more than $3 million at auction and the artist remains the enigmatic star of a one-man art movement.

As previously reported, Luxembourg & Dayan also sold Maurizio Cattelan’s Manzoni-esque, monochrome abstraction, “Untitled” from 2009 in canvas and broom for $1.5 million. The white painting, creased by the deft placement of an industrial sized push broom with the nub of the handle poking into the canvas, sold to an American foundation.

Other top-class transactions included the Jean-Michel Basquiat painting, “Untitled (Solanamum)” from 1984 at Chicago/New York’s Richard Gray Gallery that sold in the region of the $14 million asking price.

The 86 by 69 inch Basquiat has never appeared at auction and the gallery exhibited it alongside a vintage photograph of the artist, posed in white pants and seated in front of the painting.