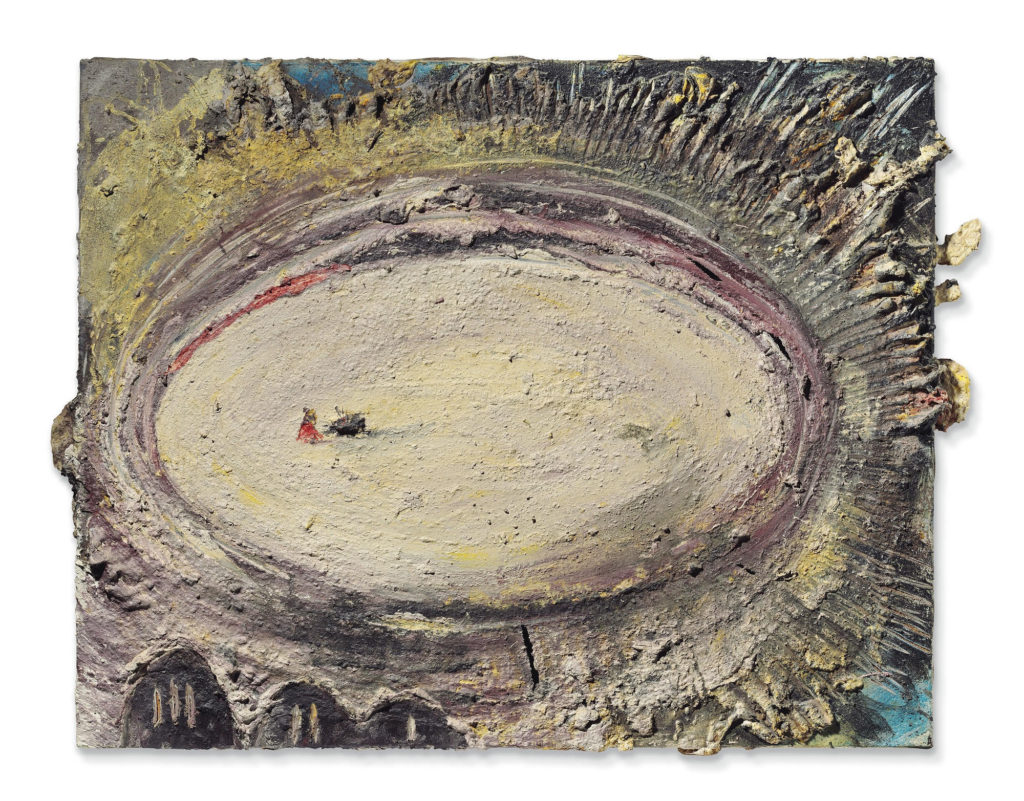 Only two of the 59 lots offered failed to sell for a sliver thin buy-in rate by lot of five percent.

All prices reported include the hammer price plus the stepped buyer’s premium calculated at 25 percent up to and including £100,000, 20 percent of that part of the hammer price over £100,000 and up to £2 million and 12 percent for anything above that.

It was a timely appearance given the artist’s critically acclaimed, multi-media exhibition currently on at Tate Modern.

Nigerian born figurative/mixed media painter and red hot sensation Njideka Akunyili Crosby’s image rich composition, “The Beautyful Ones” from 2012, comprised of acrylic, pastel, color pencil and Xerox transfer on paper and based in part on a Velasquez painting, hit a record £2,517,000/$3,075,744 (est. £400-600,000).

Crosby’s dealer, London’s Victoria Miro Gallery only sells her work to museums so collectors have to wait for a secondary market appearance, further boosting her market allure.

It was also backed by a third party guarantee, assuring that unrequited backer a financial fee for the risk taken.

The painting shattered the previous mark set by “Drown” from 2012 that sold for $1,092,000 at Sotheby’s New York last November.

It also came to market backed by a third party guarantee.

It was also backed by a third party guarantee.

Clayton acquired the work from the Robert Miller Gallery in New York in 1990, two years after Basquiat’s death from a drug overdose at age 27.

By contrast, a grandly scaled Alexander Calder hanging mobile, “Guava” from 1955, comprised of painted sheet metal, rod and wire and part of a major commission from a prominent Indian family that invited the artist to visi and work at their estate in Ahmedabad, sold to the Nahmad group for £4,533,000/$5,539,326 (Est. £3-5 million).

London dealer Pilar Ordovas, who exhibited the group (“Calder in India”) in 2012, was the underbidder. 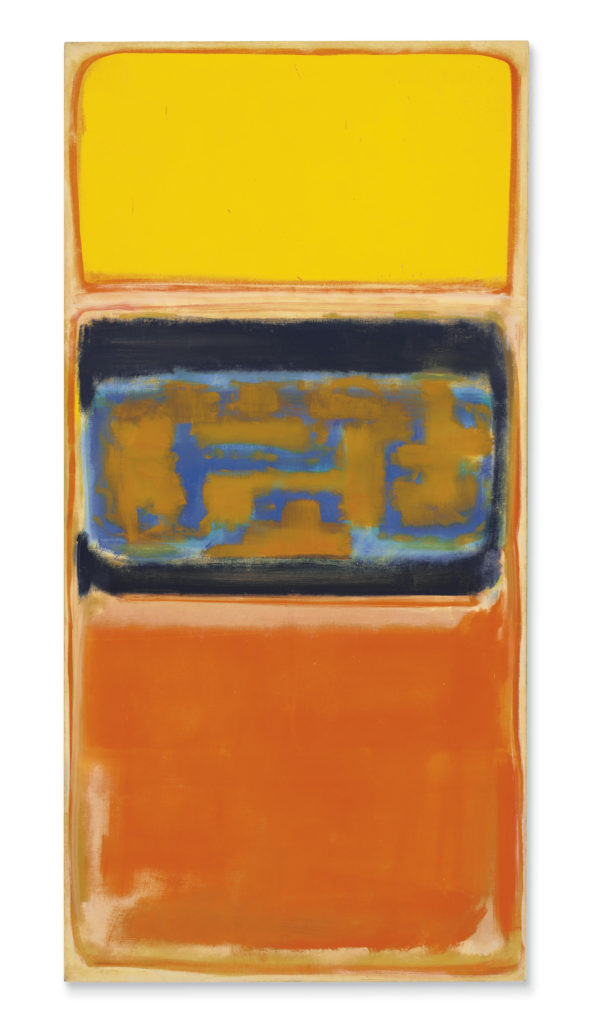 Among the star, blue chip lots, the early and sublime cover lot Mark Rothko, “No. 1 (1949)” and more significant in that it was included in the artist’s break out solo exhibition at the Betty Parsons Gallery in New York in 1950, realized a relatively tame £10,693,000/$13,066,846, going to yet another telephone bidder (unpublished estimate in excess of £8 million).

Of the dozen paintings in that 1950 exhibition, only three, including the present lot, remain in private hands, the rest in museum collections.

Of that private trio, Christopher Rothko, the artist’s son and keeper of the Rothko legacy would be an unlikely seller.

No. 1 was offered without a guarantee from the controversial collection of Russian billionaire Dmitry Rybolovlev who acquired the painting in 2008 through private dealer and free port art storage tycoon Yves Bouvier who Rybolovlev is suing in several jurisdictions, claiming fraud and being overcharged some one billion dollars for the 38 works he acquired for some $2 billion through Bouvier, according to a Bloomberg report.

It’s possible that the publicity about the ‘case’ affected the bidding.

The 78 ¼ inch high painting, contains the familiar rectangular, lozenge shapes of his mature work but in this example, retains traces of figurative elements in the center of the radiant canvas, infusing it with block like, interlocking shapes.

It was last exhibited in New York last year at the Emmanuel DiDonna Gallery in “Paths to the Absolute: Kandinsky, Malevich, Mondrian, Newman, Pollock, Rothko and Still.”

Christie’s devoted 18 richly illustrated pages of its telephone book thick catalogue to the painting, in case you didn’t realize its art historical importance.

American entries were strong performers as further evidenced by Robert Rauschenberg’s multi-imaged “Transom” from 1963,  in oil and silkscreen ink on canvas, that sold to yet another telephone bidder for £4,645,000/$5,676,190 (est. £4-6 million).

The timing of the offering, again, couldn’t be better, given the critically boosted Rauschenberg retrospective at Tate Modern.

The catalogue listed the diptych as two separate works (lots 51 & 52) and separate estimates but Uecker contacted Christie’s in time and corrected that mistake.

The widely exhibited picture has been included in all of the major Doig shows, including the most important one at Tate Britain and retains its swirling presence at 78 ½ by 98 3/8 inches.

The seller acquired the work from the Victoria Miro Gallery in the year it was painted.

So far, eleven Doigs have sold for more than $10 million at auction, not a bad batting average for a living artist. 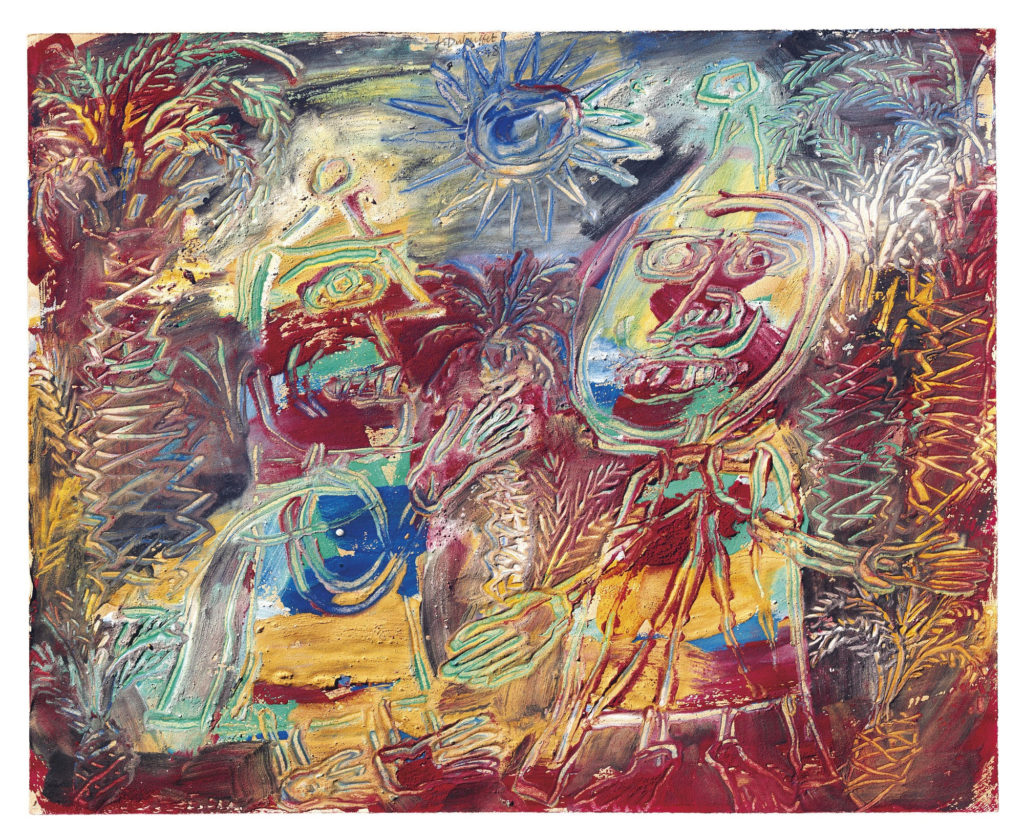 Though appearing at first puzzle-piece like and abstract, the composition includes a medley of rushing figures embedded in the chaos.

The artist is currently enjoying yet another crowd drawing retrospective at Tate Britain, the largest survey to date (through May 29) but this entry didn’t bloom.

The storied series, featuring the lone toreador with red cape, a charging bull and packed arena, includes some thirty works and 10 percent of them are on offer this week.