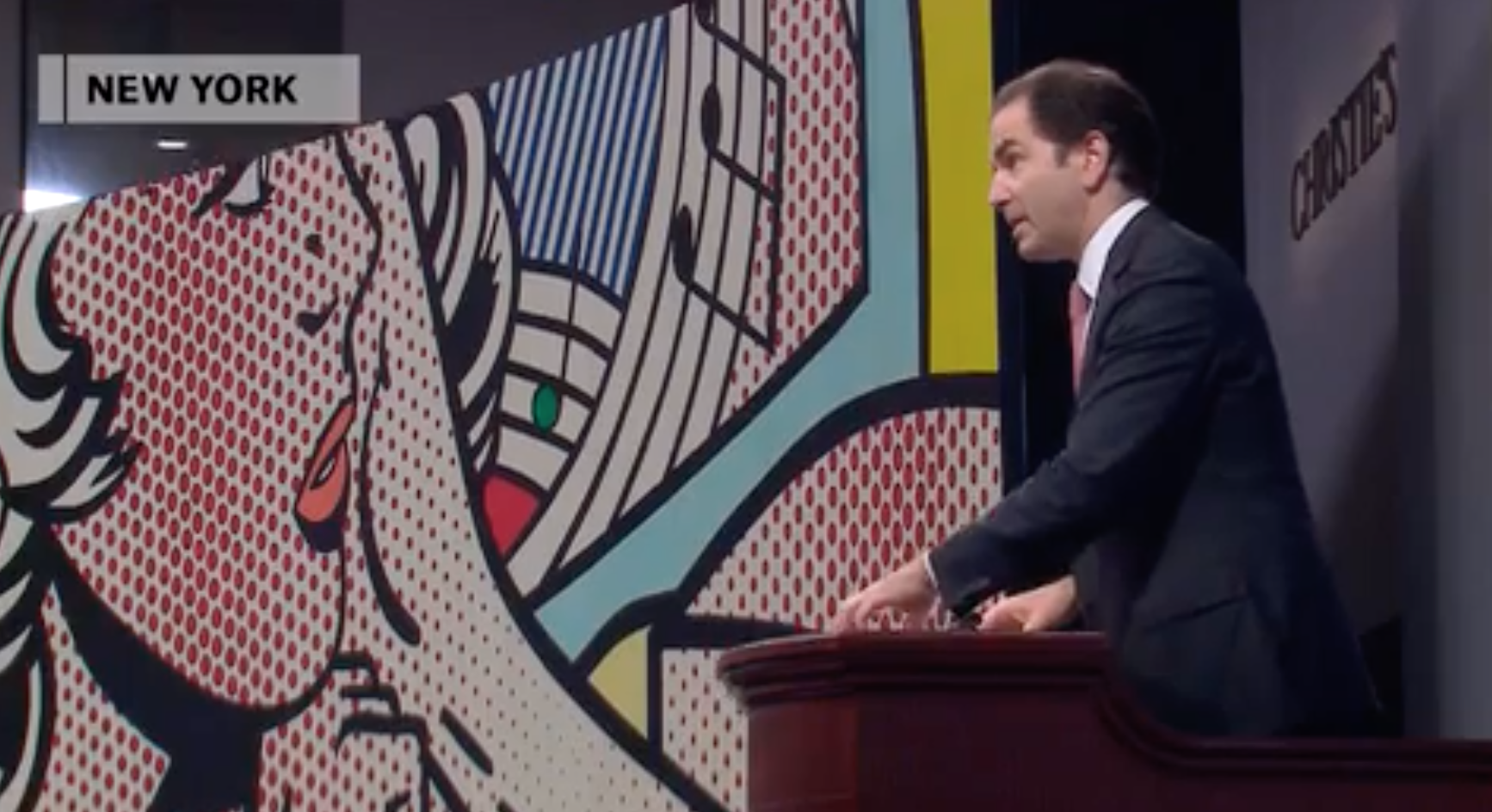 Only five of the 79 lots offered failed to sell for a slim buy-in rate by lot of six percent.

The total hammer achieved, before the added on fees hit $362 million, comfortably above the $337 million low estimate. 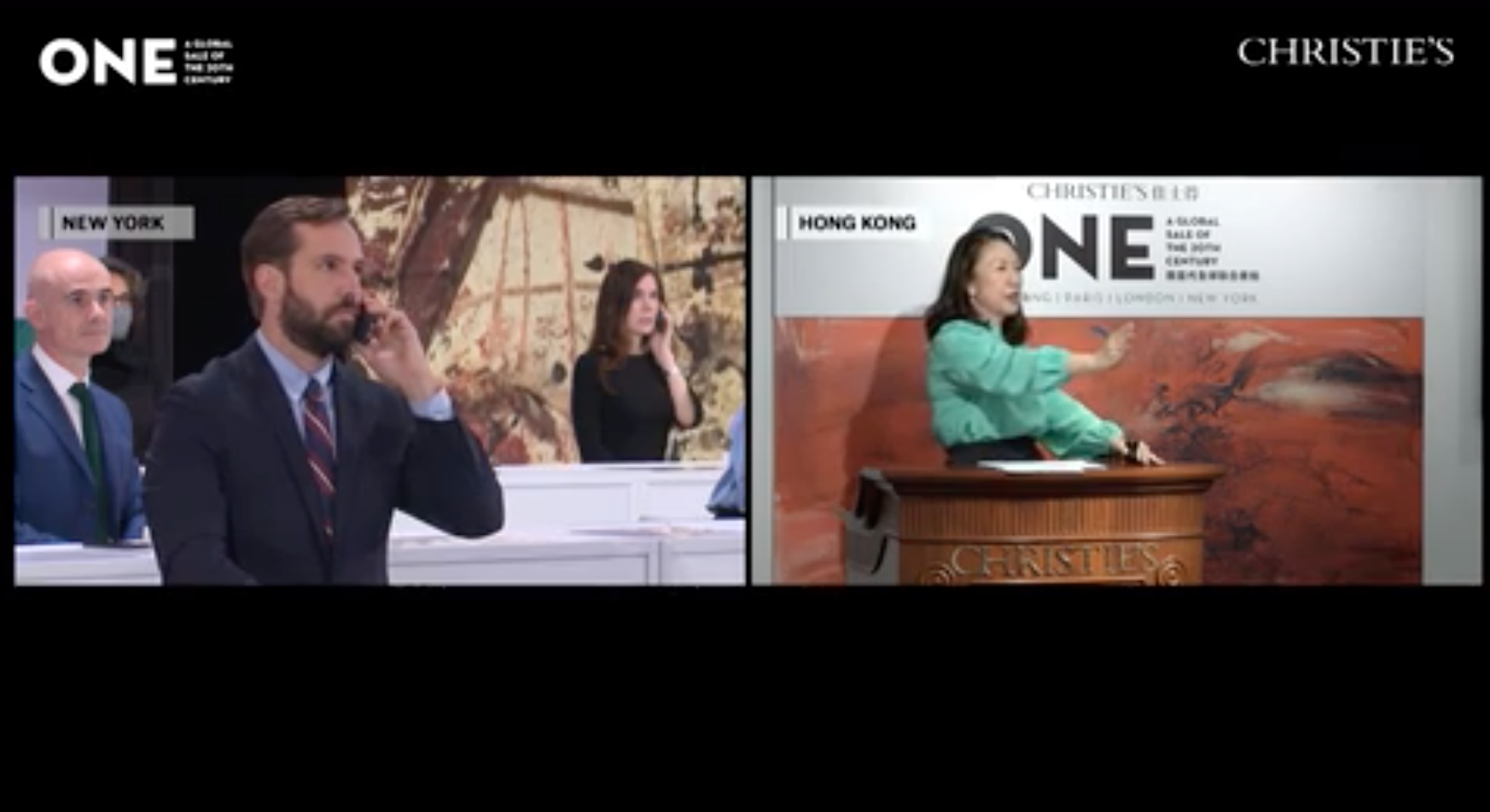 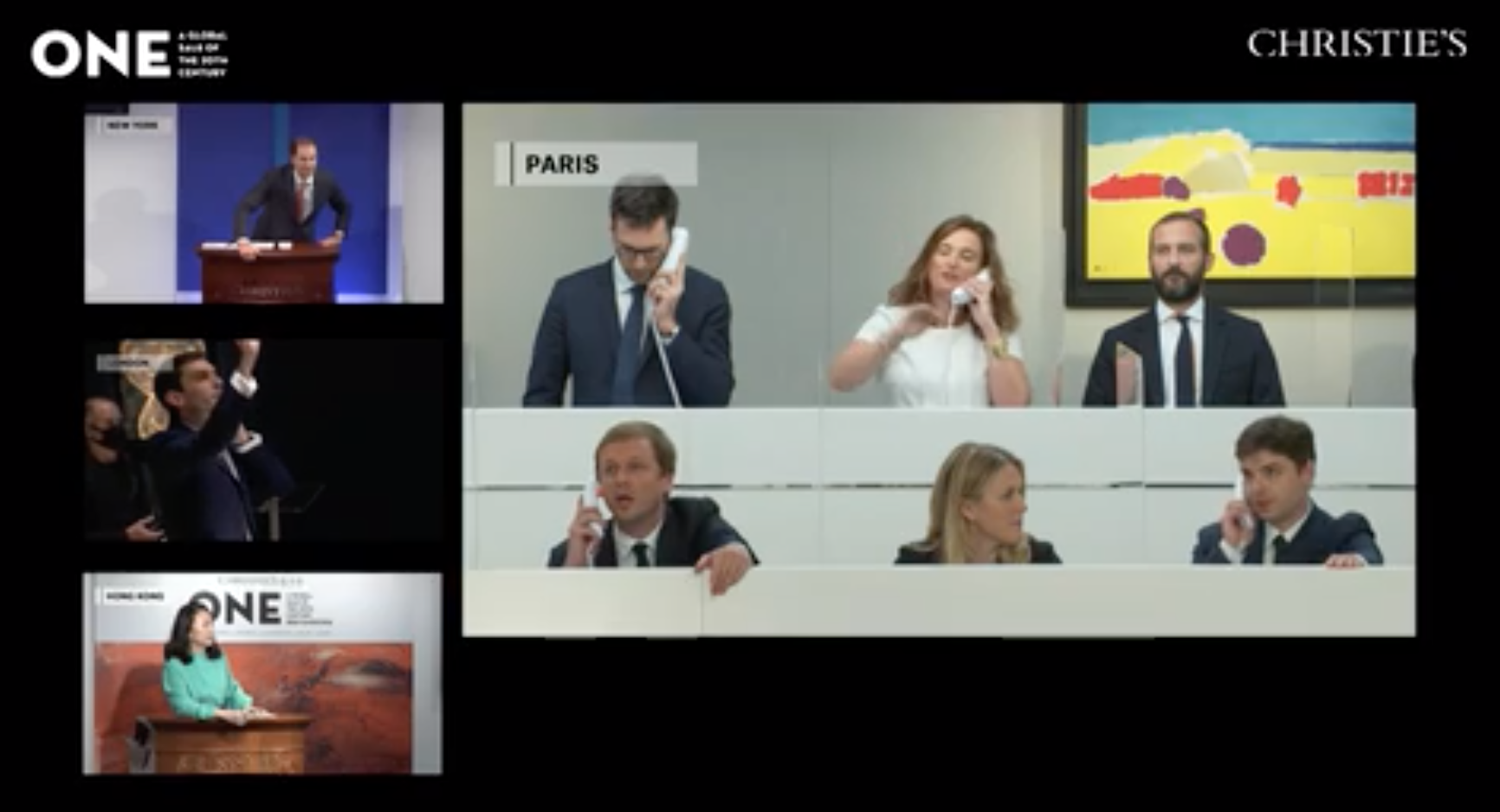 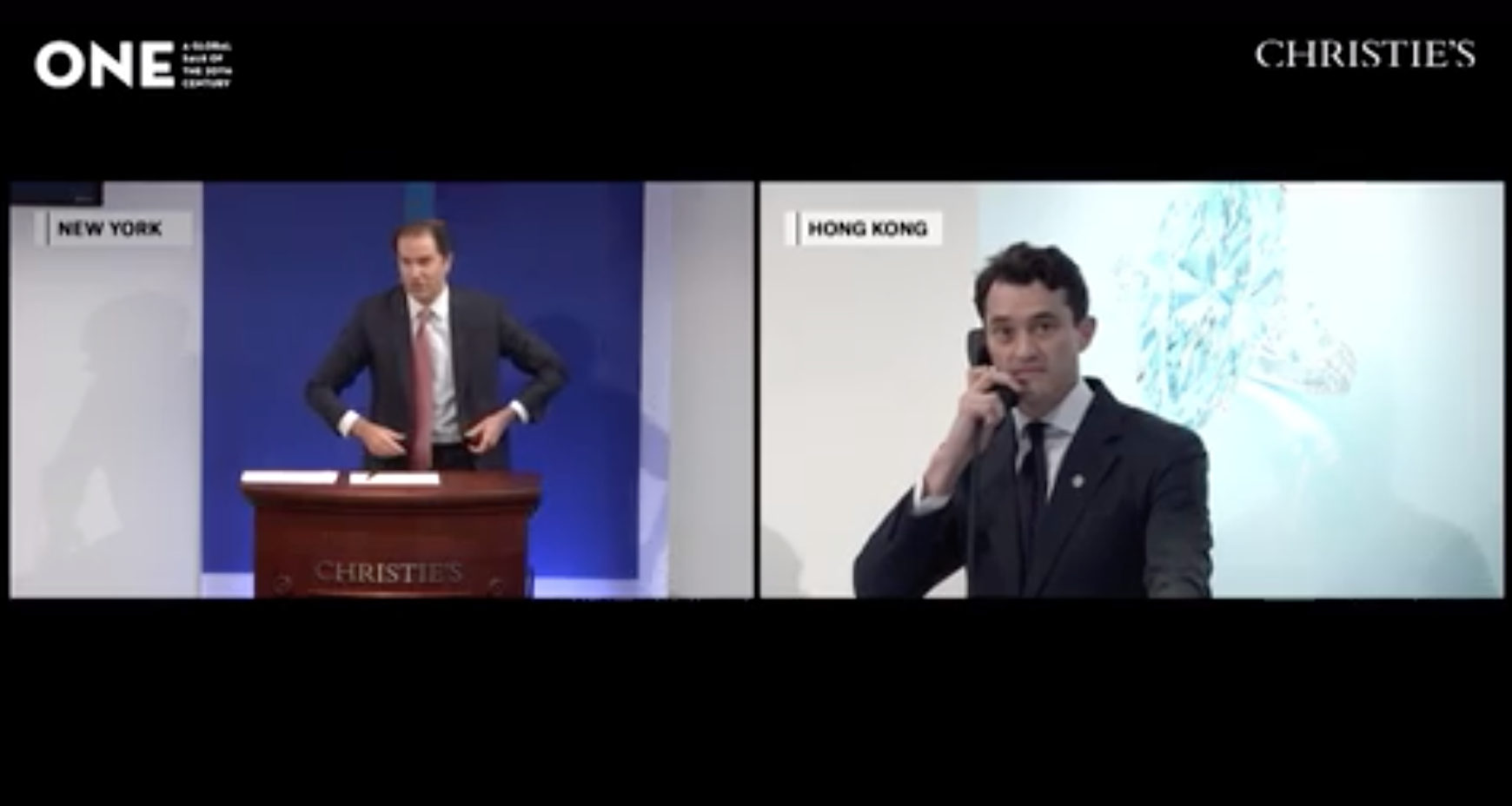 Seven artist records were set during the close to four hour marathon that began in Hong Kong and moved to salesrooms in Paris, London and finally New York, the last stop bearing the richest fruits of the digitally pumped endeavor.

A chunky percentage of the lots offered were backed by financial guarantees, with 35 representing third parties outside Christie’s and two house guarantees.

One of those, a late Philip Guston figurative work, “Fort” from 1979 failed to sell against a $4-6 million estimate and became a spurned property of Christie’s. 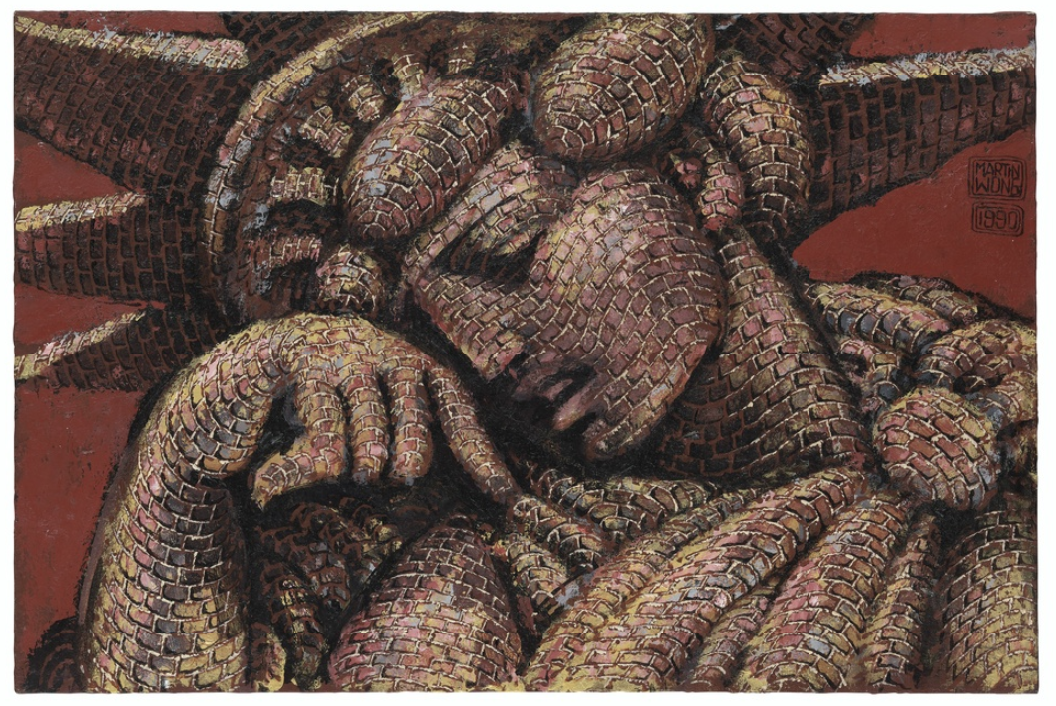 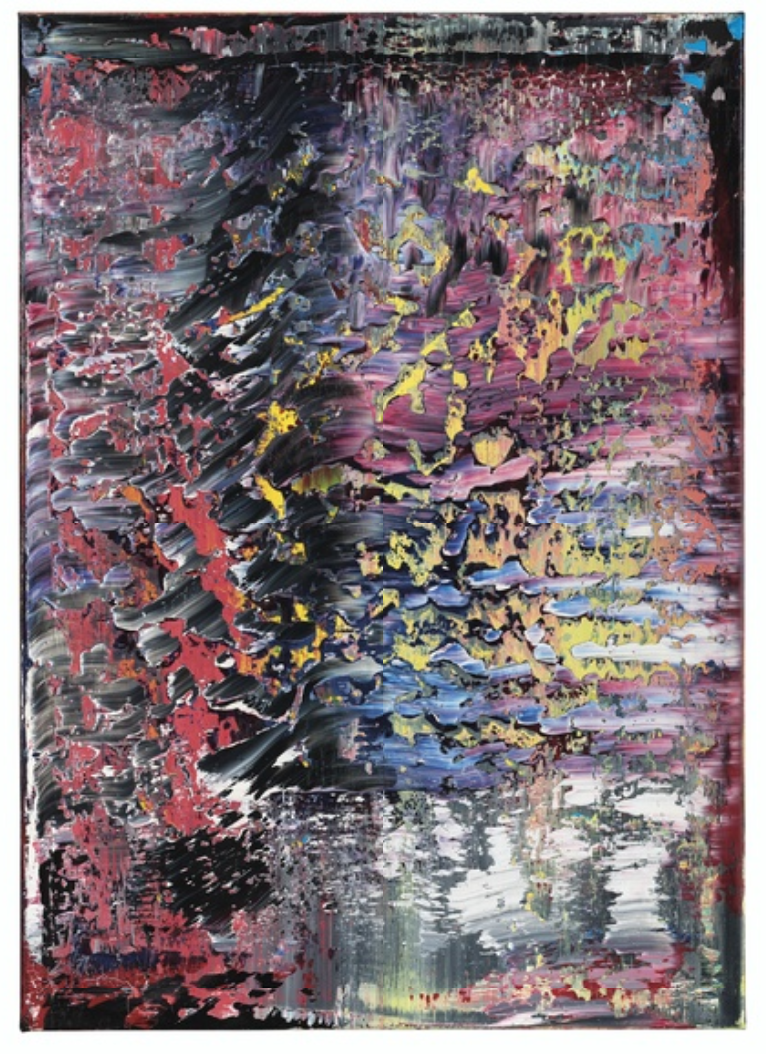 The painting debuted at the artist’s fresh from the studio solo exhibition in New York at the Sperone Westwater Gallery in February 1990.

The only disappointment in the Hong Kong leg was the buy-in of Zao Wou-ki’s blazing red, large-scale abstraction, “21.10.63” from 1963 that didn’t get close to the region of its $10 million pre-sale estimate.

The action moved from the Alexander House venue in Hong Kong to Christie’s Paris salesroom and with the portage a change in currency from Hong Kong dollars to Euros, a rather annoying move by Christie’s and one meant to inject a regional flavor to the sales.

Welcome to the New Normal.

Even so, the Paris leg soldiered on with deft and humor laced auctioneering by Cecile Verdier, the president of Christie’s France.

It came to market ‘naked,’ meaning no financial guarantee.

It hailed from a private Australian collection where it has lived since 1953.

At one point when the bidding lulled, auctioneer Verdier murmured, “should I sell or should I wait?” and with it, another squeezed out bid.

The auction gauntlet (or gavel) moved on to London and the more familiar visage of Jussi Pylkkanen, Christie’s global president and star performer taking on 21 lots and calling out the prices in pound sterling. 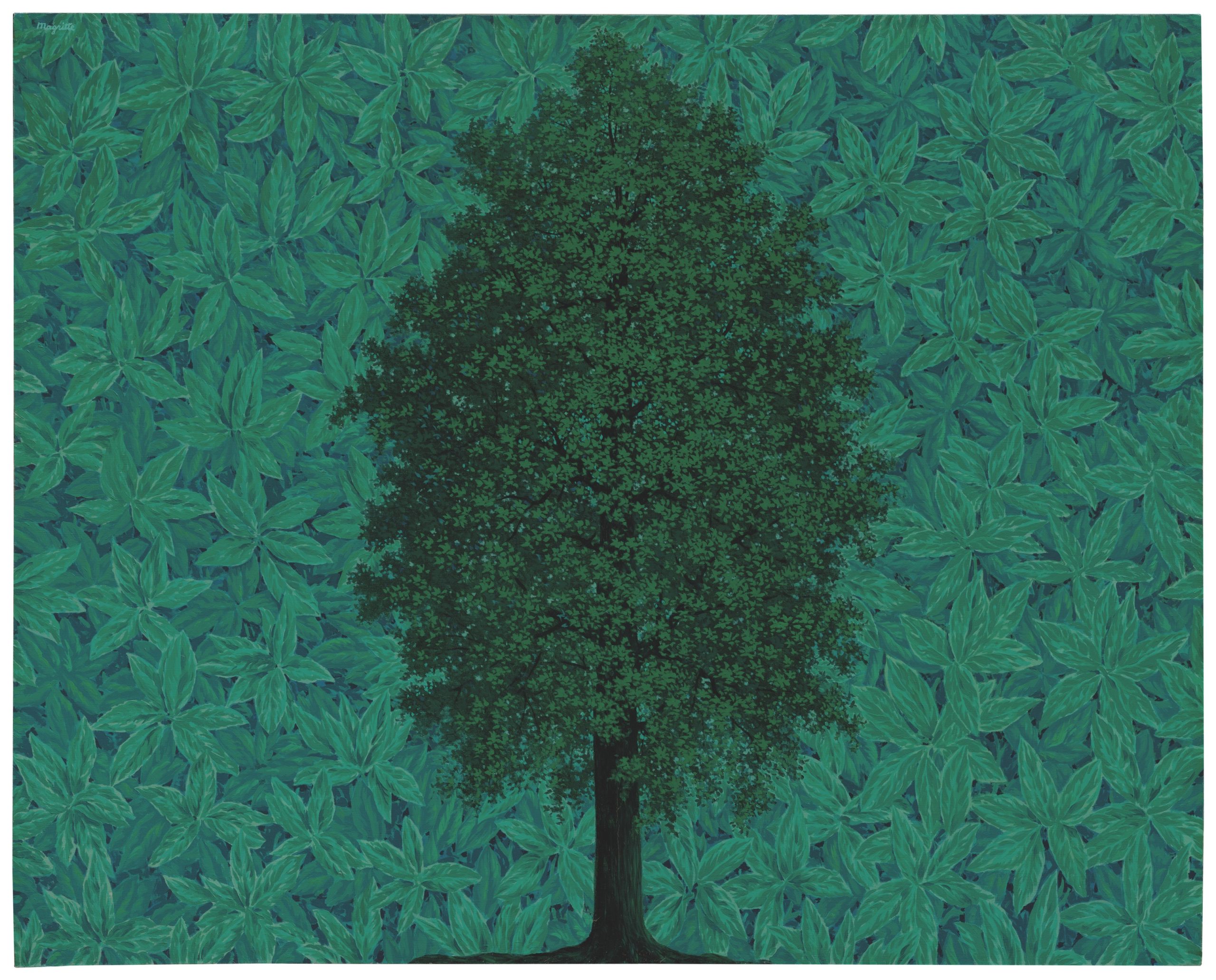 It sure felt like the heavy-hitter lots were saved for the final leg of 34 lots in New York, led by auctioneer and specialist Adrien Meyer. 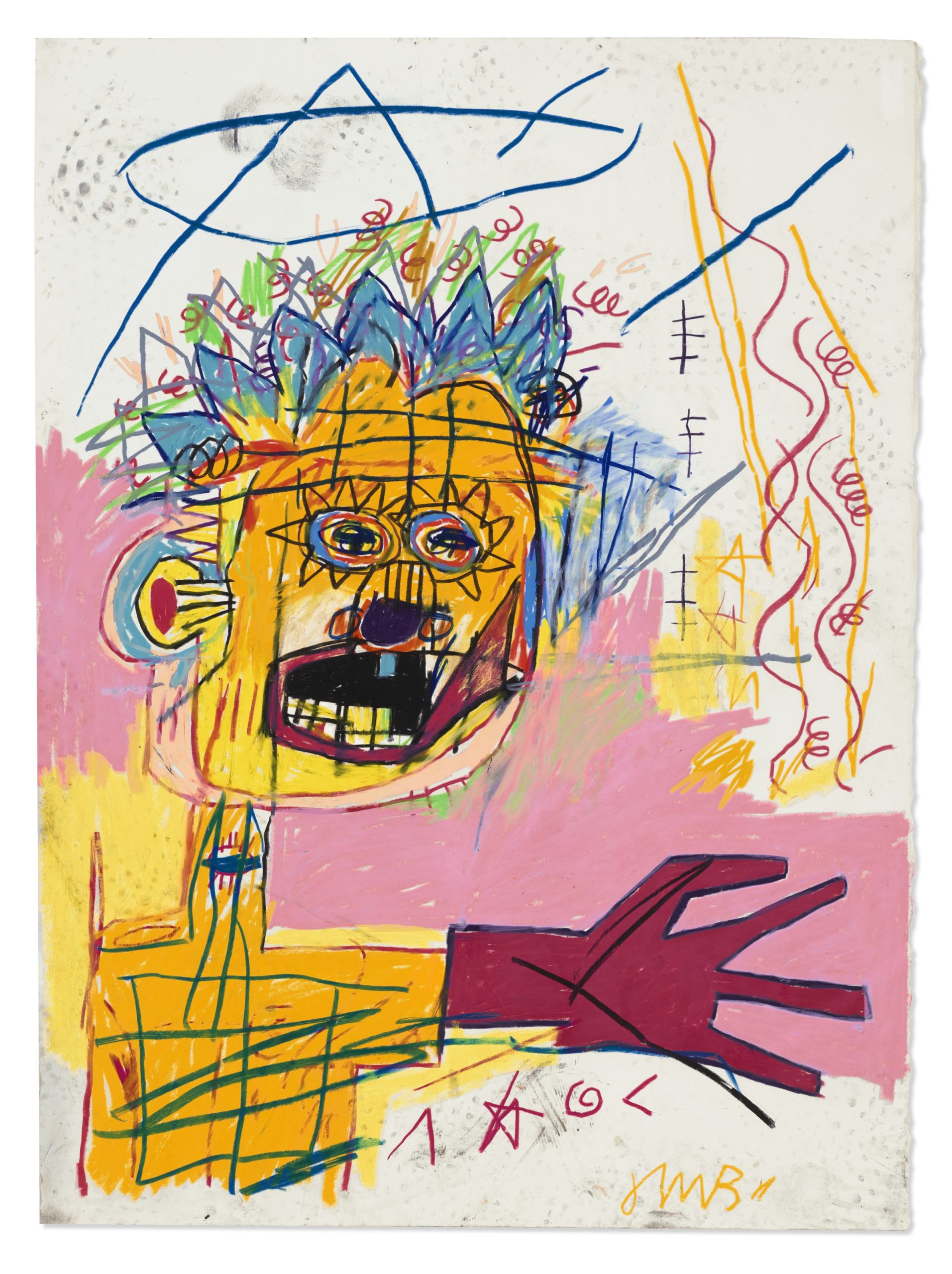 The 85 -inch square painting of concentric squares and softly colored in shifting shades of black, gray and white came ‘naked’ to market from the storied family collection of Chicagoan Morton G. Neumann.

The title refers to the 1960 massacre of black protesters in South Africa that resulted in the deaths of 69 people.

The big hitters continued with a rare to market work by legendary New York bred AB-Ex era artist Barnett Newman, “Onement V” from 1952 and representing the last of that key series in private hands and that made $30,920,000 (est. $30-40 million). It too came to market without a guarantee, meaning the seller is entitled to the full hammer price & perhaps more.  It last sold at Christie’s New York in May 2012 for $22.4 million, representing a healthy return for the seller.

If you can put a price on fame, Pablo Picasso’s, “Les Femmes d’Alger (Version ‘F’) from 1955, certainly counts with its precious pedigree from the Victor Ganz collection and though relatively compact in size at 21 3/8 by 25 5/8 inches, attracted a posse of five bidders and sold for $29,217,500 (est. on request in the region of $25 million).

Inspired by Eugene Delacroix’s 19th century ode to those sequestered women, the series made headlines in the single owner Ganz sale at Christie’s in 1997 and again in May 2015 when “Les Femmes d’Alger (Version ‘O’)” from the same year made a record $179,364,992, at the time, the most expensive picture ever to sell at auction.

It now ranks as the second highest Mitchell at auction. 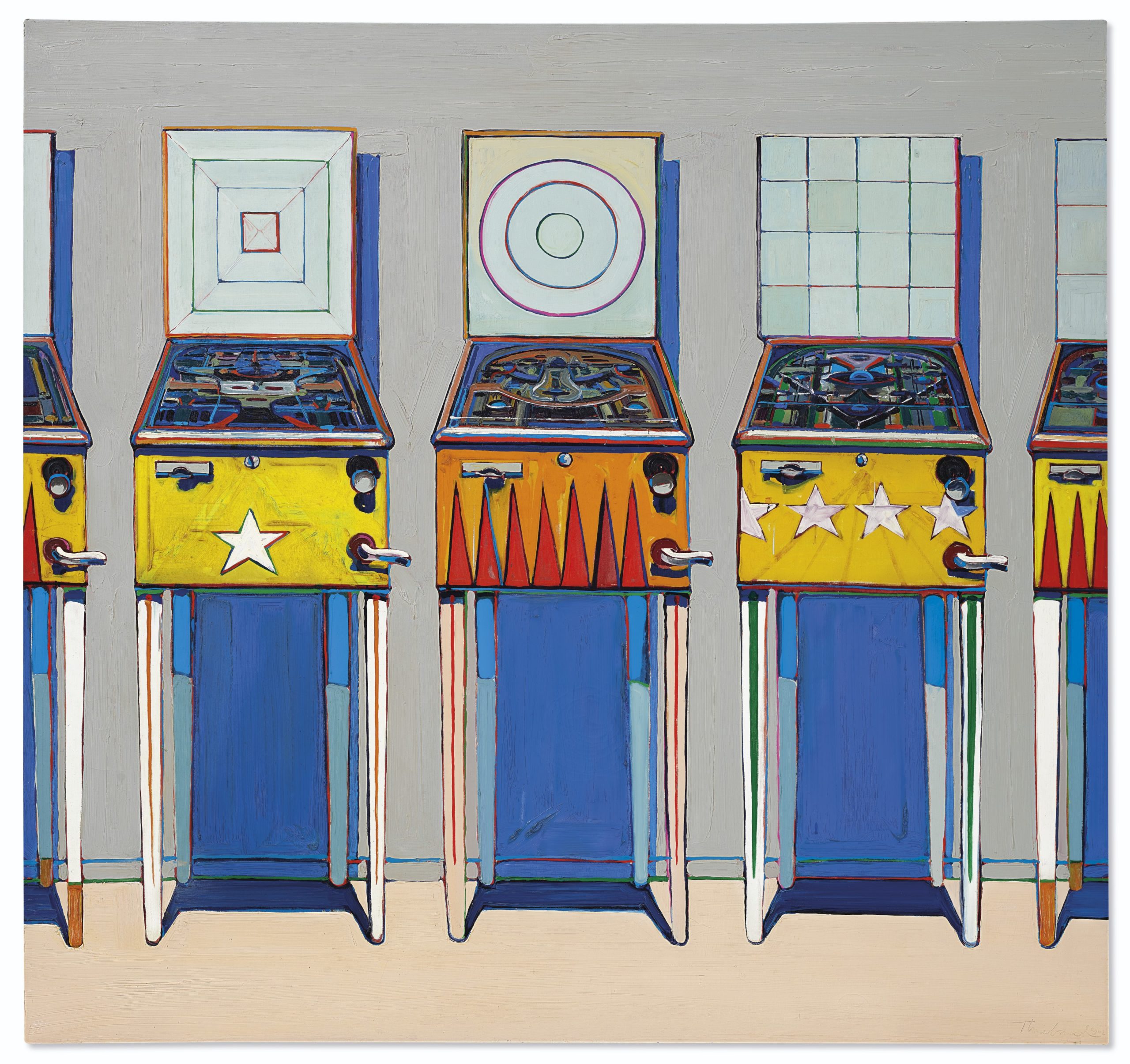 Both works came backed by a third party guarantee and for the Thiebaud, serves as a sweet slice of birthday cake for the 100 year- old artist. 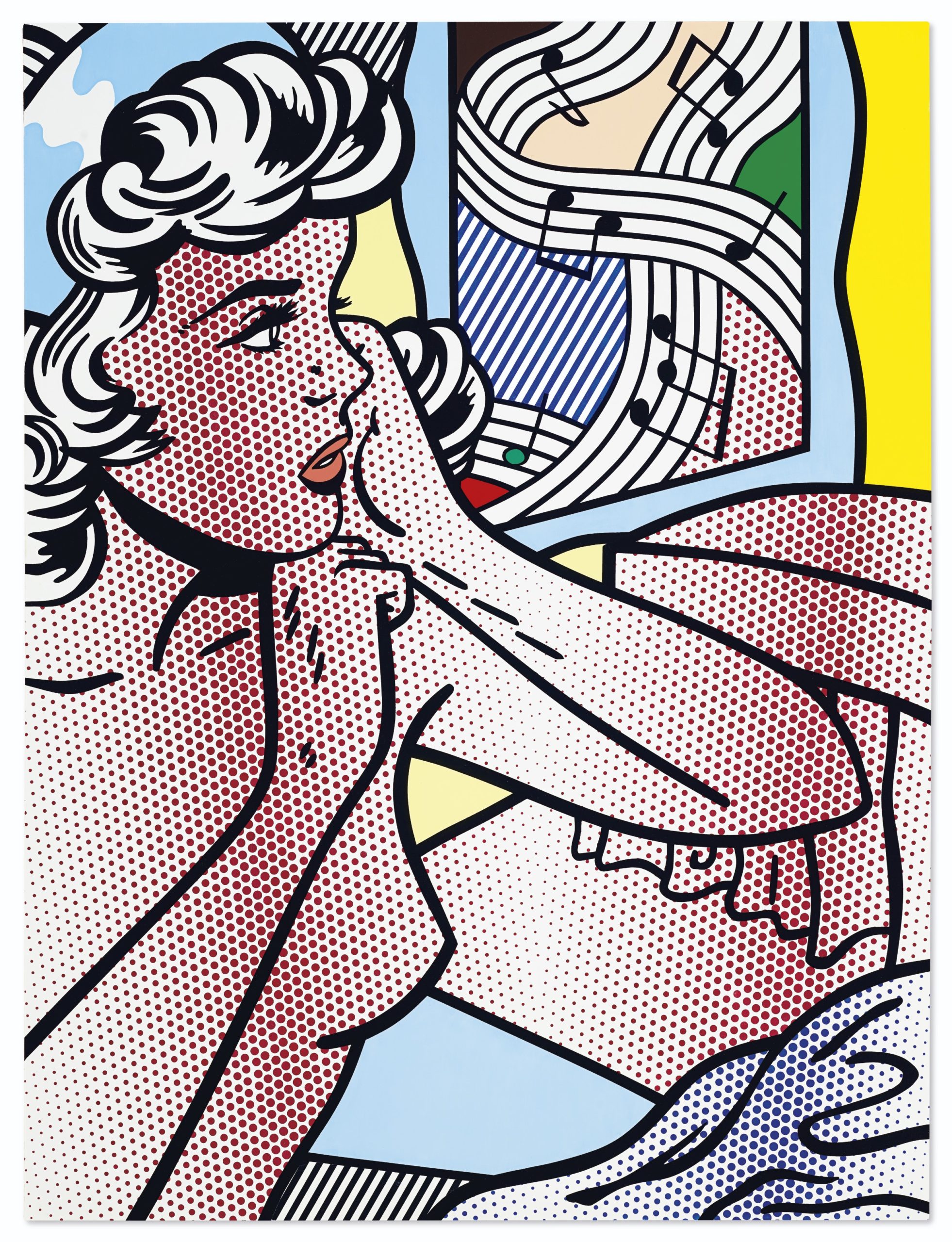 As a curtain closer, Roy Lichtenstein’s late and deftly sexy, ”Nude with Joyous Painting” from 1994, and executed in oil and magna on canvas while scaled at 70 by 53 inches, attracted another posse of bidders and finally, after a nine minute long battle, went to an Asian collector bidding by telephone for $46,242,500 (unpublished est. in the region of $30 million). 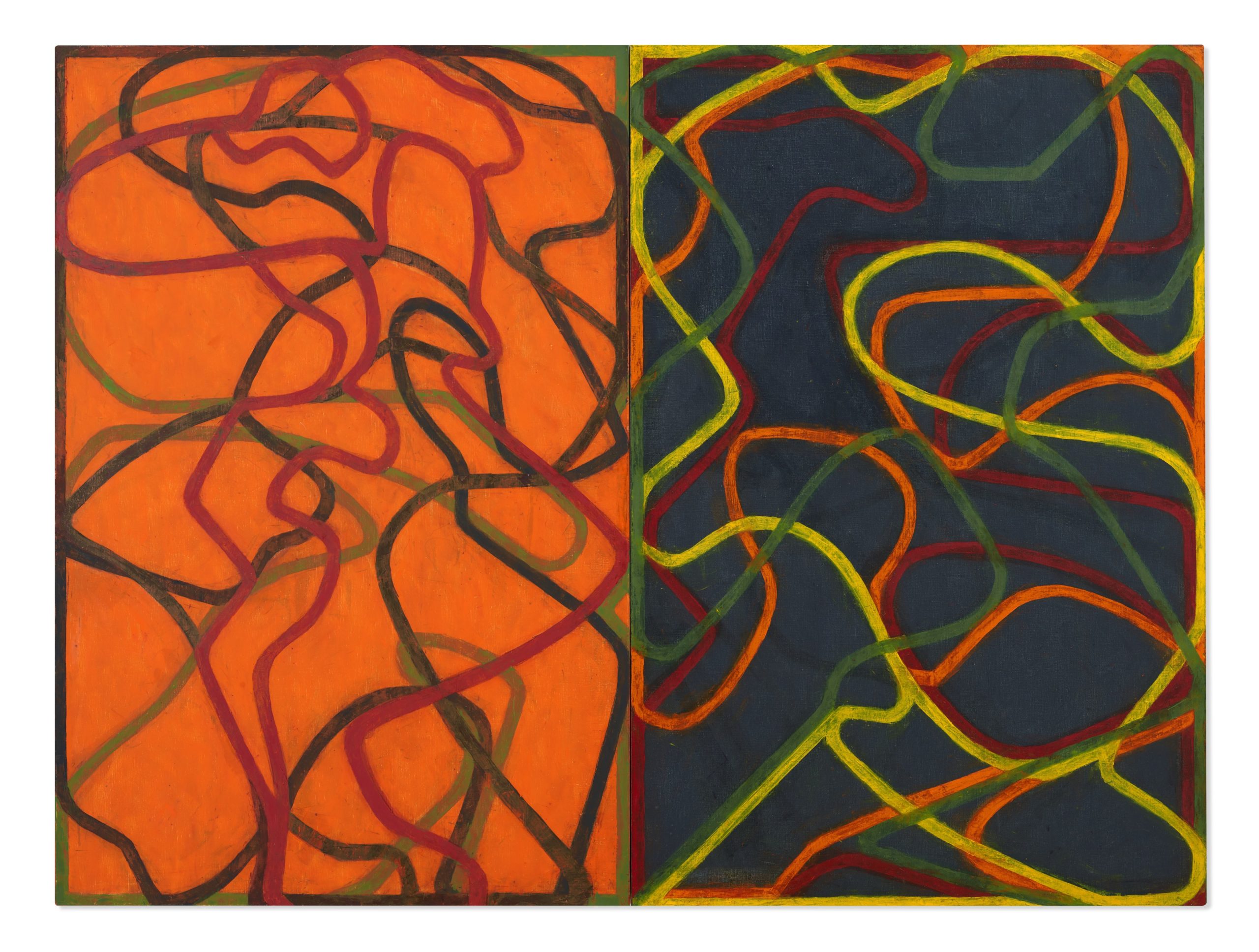 So how does this ‘New Normal’ look from the vantage point of a seasoned, art market journalist?

Hmmm. The stats looks great and the glass ceiling for seven and eight figure works of art offered on the digital plane is certainly shattered—still, the thrill of a live auction room in a single location is nowhere to be found.

Though arguably shy of looking at this as apples and oranges, Christie’s Post-War and Contemporary Art sale in New York in May 2019 made $538.9 million for the 51 lots that sold.

“We are very pleased by our performance and results today,” said Guillaume Cerutti, the CEO of Christie’s at post-sale Zoom press conference, “…and all unified by the magic of the technology.”