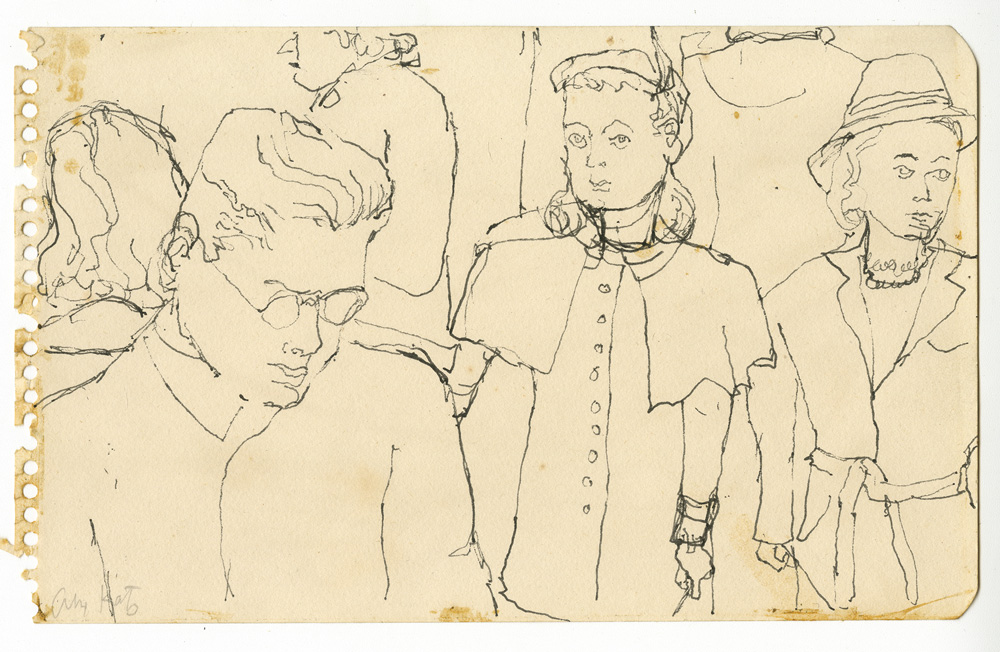 Alex Katz’s first solo exhibition took place at the Roko Gallery in New York in October 1954 when the artist was 27 years old.

Between 1946 and 1949 Katz, shortly after his Navy service, was a student at the tuition free Cooper Union Art School, and during that Post-War time, used the New York City subways as a fast moving studio and experimental stage for his now storied and still contrarian realist style that emerged in the Abstract Expressionist dominated era.

The exhibition at Taylor features notebook line drawings Katz made on the subway, in parks and cafeterias, delivering a bravura display in black on white, capturing not only the culture of that bygone time, with men in fedoras and women clutching modest sized handbags but a Petri dish of Katz’s growth as an artist.

It brought to mind a characterization that critic Barry Schwabsky made about Katz that he fit Baudelaire’s description as a painter of modern life.

The gallery produced a facsimile, spiral bound notebook, chock full of those startling, animated images from the 1940’s of men reading newspapers while leaning against a subway pole or a couple intimately chatting or a woman patiently waiting for her stop. 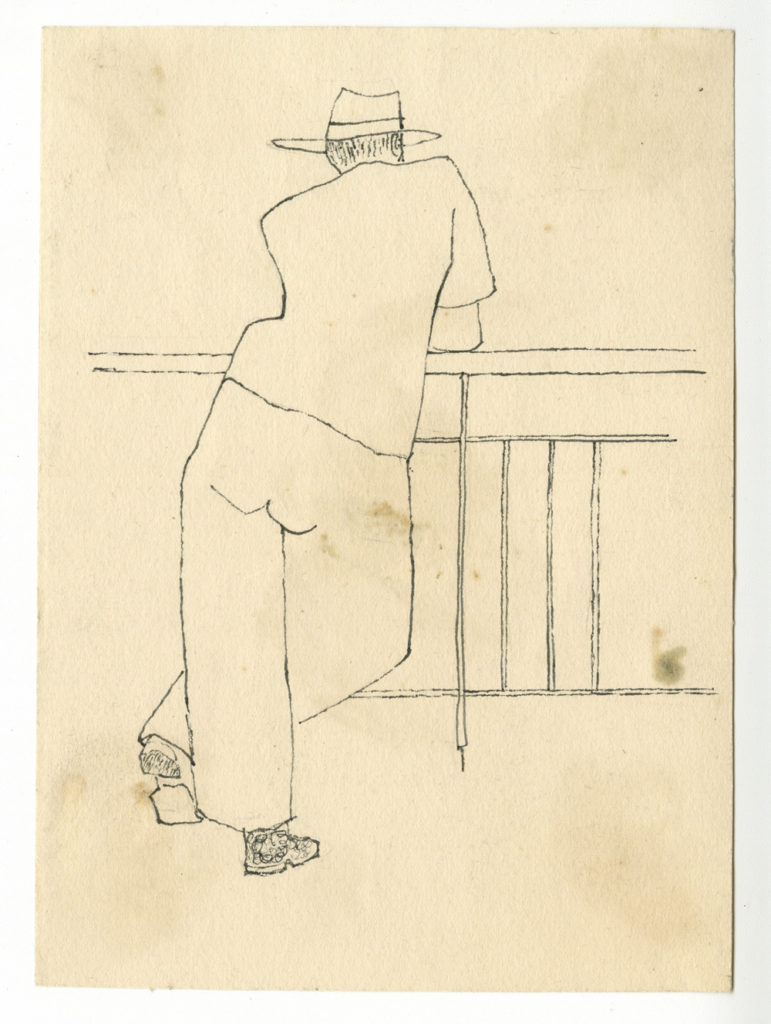 On the backside of some of the reproduced pages, notes and scrawls fill up the space, with one page spelling out the words ‘lust’ and ‘hell’ in capital letters along the margin, as if it were a crazily prescient Christopher Wool text painting.

Never before exhibited, the 52 drawings (and a single oil on Masonite painting, “Three Figures on a Subway” from 1948) create a time capsule effect, as if someone luckily found an old photo album at a flea market and the photographs turned out to be by Edward Steichen.

I recently caught up with the artist at the gallery and Katz generously talked about that long ago time in a jazzy, conversational style that added another textured layer to the drawings on display.

Dressed in a downtown uniform of jeans and a hoodie, all that was missing was a graffiti marked skateboard at his side. It wouldn’t have surprised me. 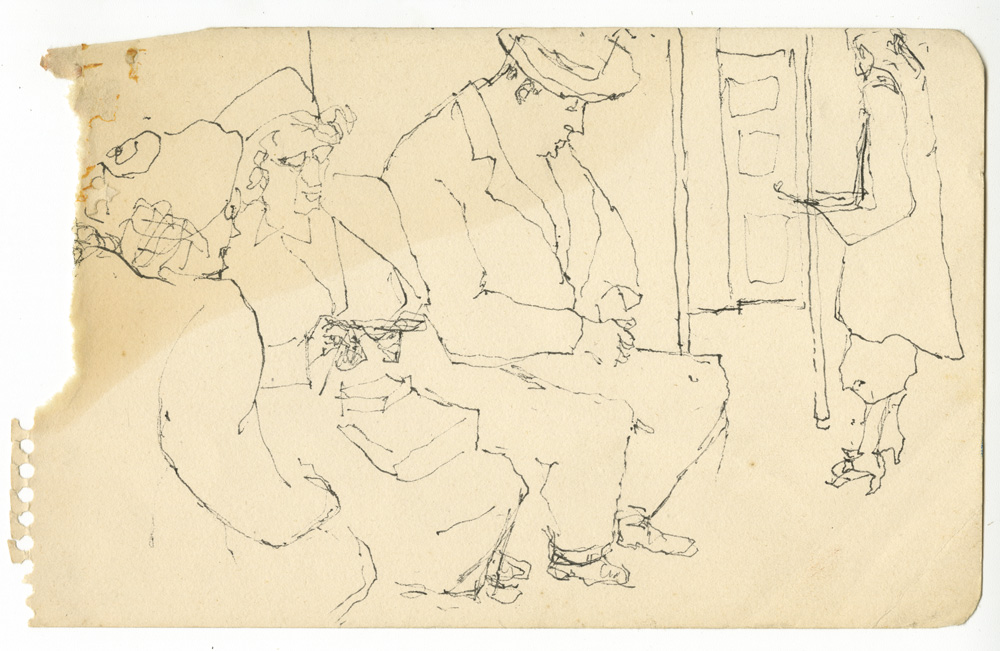 Alex Katz: “I was in the Navy and heard about Cooper. I took the test and got in. I started drawing around the clock, from Queens to Cooper. I’d take the subway to draw for three years. You’d go out to a bar and draw, jazz concerts and draw, always with a small pad, the same size as the facsimile but the paper was thinner and there were fewer pages in it.

You didn’t bother too many people, it was a different clientele on the subway then, it was middle class, the women in gloves, the men in suits and hats. Clothes were more formal. I was 19 years old.

Cooper was like a modern art school, very competitive and high energy, with most of the students around 23 years old (going in after the war years). It was a really rough place and I was trying to catch up. It was a Bauhaus/Cubist school and my idea was to have no ego, to be passive and take it in.”

Katz won a scholarship to the Skowhegan School of Painting and Sculpture in Skowhegan Maine in 1949, a propitious move that further formed his life as a painter. 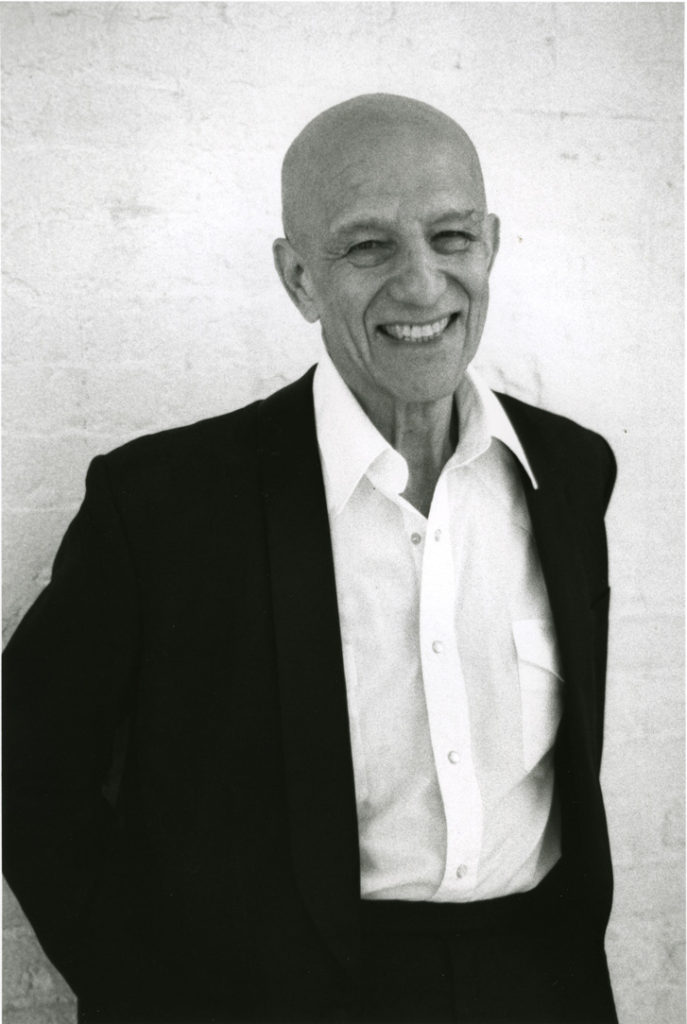 AK: “I began painting outdoors. It wasn’t any better but more interesting, painting the sensation of what I was seeing. My painting looked like an old dishrag in the 1950’s, but when I was painting ‘open’ in the landscape, it was mostly instinctive and felt right. The results were not so hot but it didn’t matter. At the end of six to seven years, I could really paint. I was experimenting in the ‘50’s, all I knew was that my paintings weren’t conventional. I had no guideposts. Joan Mitchell was a very good painter but I didn’t want to paint that way.

Returning to his observations about his subway drawings, Katz went on to say,

AK: “They look pretty good now. I couldn’t pull a line then. Now I can. The drawings are all descriptive in form. After ten years I could draw on both sides of the line. They’re like containers. I save a lot of the work now but I dumped 1,000 paintings in the 1950’s. I saved about 10 percent of the subway drawings.

I always look at people in the subway. I look at the clothes and the colors. Where else can you pay a ‘nickel’ (as the fare was in the old days) and see so many interesting things?”