Skip to contentSkip to content
Blog
A Well-Traveled Basquiat lands for $41.8 million at Christie’s Hong Kong
March 26, 2021 by Judd Tully 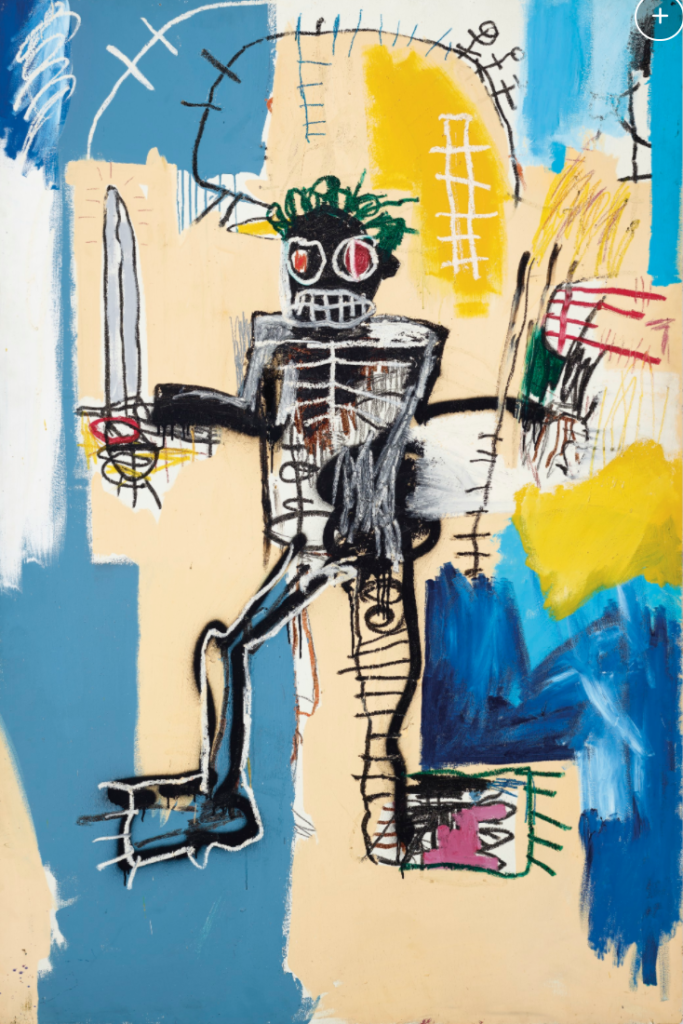 The art market showed off considerable strength on Tuesday (March 23) during Christie’s marathon, 3 ½ hour live-streamed auction in Hong Kong and London, garnering £198.7/$274.8 million for the 76 lots that sold.

Six lots went unsold for a crisp buy-in rate of 7 percent and five artist records were set, including Banksy’s “Game Changer” from 2020 featuring a masked Red Cross nurse doll and a kneeling boy in overalls that fetched £19.4/$23.1 million against a pre-sale estimate of £2.5-3.5 million). Remarkably, the artist donated the work for auction to help support health organizations and charities across the UK.

Christie’s also donated part of its buyer’s premium from the lot to those causes (not KAWS).

That spectacular price and feel good moment of the Banksy certainly overshadowed the performance of Jean-Michel Basquiat’s fierce “Warrior” from 1982 that came to market armed with a third party guarantee and sold for HK$323,600,0000/$41,857,351 and that came in near the high side of pre-sale expectations pegged at 240-320 million HK$.

Still, the price represents the most expensive result of a work of Western art in Asia and apparently was purposely offered as a one-off lot in Christie’s Asia House sales room in Hong Kong as a condition of the consignor, the New York based real estate mogul Aby Rosen.

(The Canvas first reported that Rosen was selling the painting.) 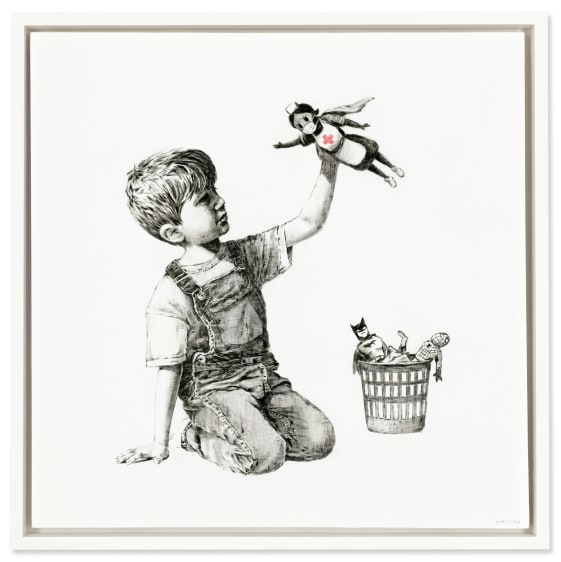 That condition, as revealed by Christie’s ceo Guillaume Cerutti in post-sale commentary, underscores the rising strength and importance of the Asian market for the global art market.

At any rate, Basquiat’s “Warrior” has been on a kind of Ulysses like journey, dating from an early purchase in 1996 by the esteemed collector/dealer Jose Mugrabi for around $250,000 and who acquired the 72 by 48 inch acrylic and oilstick on wood panel from the late and great Paris dealer Enrico Navarra who staged a Basquiat solo that same year and also published Basquiat’s catalogue raisonne in 2000.

“When we bought those paintings,” said Alberto Mugrabi, one of Jose’s art dealing sons, “we were expecting them to sell for a million dollars in the future. That was back then and we sold it privately in around 2000. Basquiat will be exactly like van Gogh—if you want to see what Basquiat is going to look like, look at van Gogh’s market and it might even be stronger than that.”

After a time at London’s Hamilton Gallery (as noted in the catalogue raisonne), the painting first appeared at auction at Sotheby’s New York in November 2005 when it sold for $1,808,000 against an estimate of $1.8-2.5 million.

For its fourth trip to the auction block, “Warrior” appreciated handsomely and became the fifth highest Basquiat price at auction at $41.8 million, trailing “Flexible” from 1984, “Dustheads” from 1982, “Untitled” from 1982 and the record setting “Untitled” from that same great year and that realized $110.5 million at Sotheby’s New York in May 2017, selling to the Japanese billionaire Yusaku Maezawa.

“Warrior,” before its brief stay at Christie’s in Hong Kong, was exhibited at the Brant Foundation’s inaugural Basquiat blockbuster show in the East Village in the spring of 2019.

It was acquired by the seller in 1988 from Galerie Thaddaeus Ropac in Salzburg. 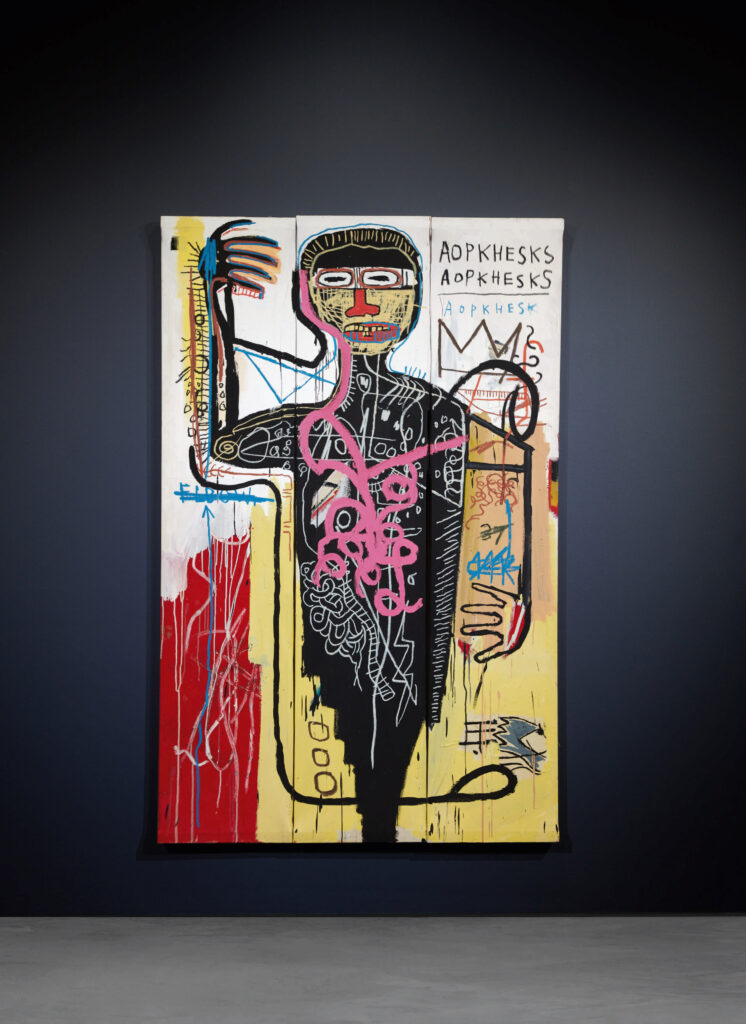 Two days after Christie’s sale, Sotheby’s announced it was selling another Basquiat gem, “Versus Medici” from 1982 in its New York salesroom in May with a $35-50 million estimate.

It comes to market from the late Belgian/Israeli collector Yaron Bruckner (according to the catalogue raisonne but not disclosed by Sotheby’s) who acquired the painting privately in 1990. It has never been at auction and only recently appeared in the survey exhibition “Jean-Michel Basquiat: Made in Japan,” held at the Mori Arts Center Gallery in Tokyo. It was the first comprehensive Basquiat exhibition in Japan and that also included Maezawa’s masterpiece. 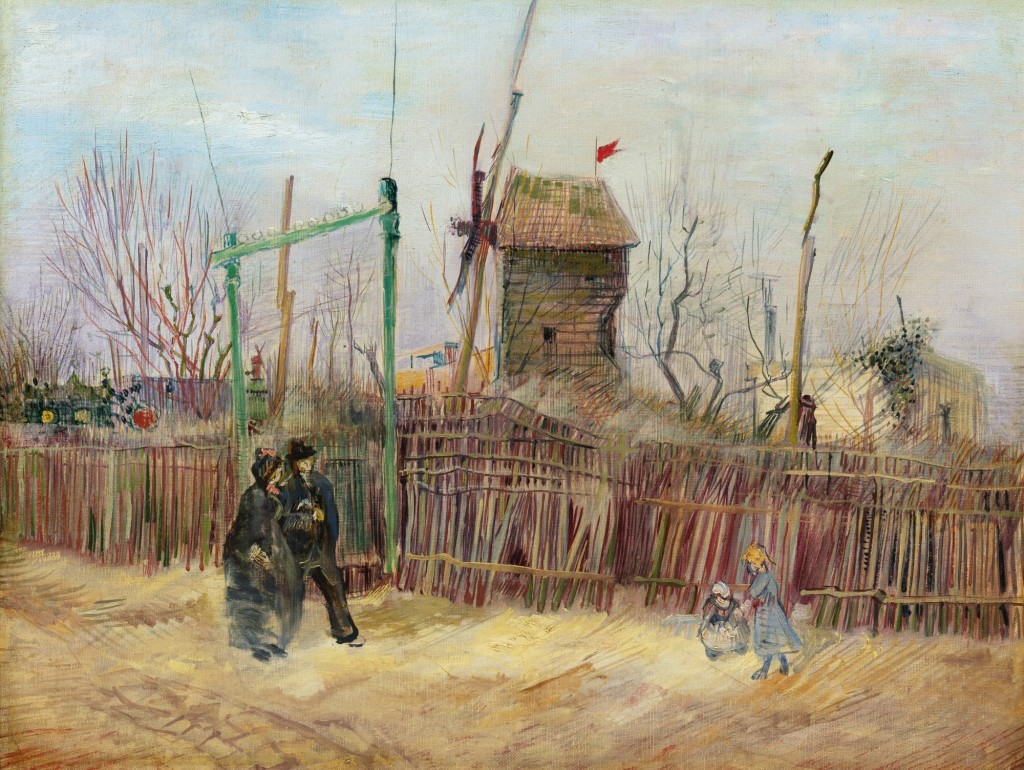 Coming back to Mugrabi’s comment about van Gogh’s bullet proof market and its kinship with Basquiat’s, a relatively minor and small scaled but rare work in van Gogh’s hallowed oeuvre, “Scene de rue a Montmartre (Impasse des Deux Freres et le Moulin a Poivre)” from 1887 and long held in a French collection, sold on Thursday at Sotheby’s Paris for the hammer price of €13,091,250/$15,414,164, toppling its €5-8 million pre-sale estimate.

The collective appetite for both artists continues to be unquenchable.