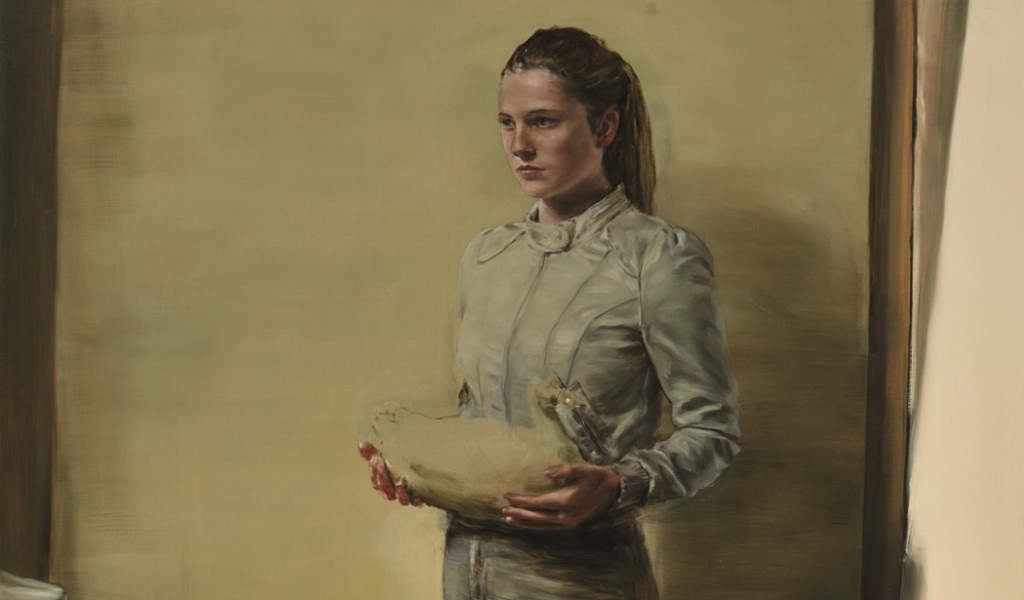 Curiously, the Italian component this round nicked its contemporary side £40.4/$62.5 million versus £36.3/$56.2 million. That hasn’t happened since the art market mini-crash in October 2008. Eleven of the 51 lots offered in the Italian section failed to sell for a decent buy-in rate by lot of 22 percent.

That gap tonight was largely due to the record-breaking Lucio Fontana pierced painting “Concetto spaziale, La fine di Dio” from 1963, which fetched £15,941,150/$24,676,668 (est. £15-20 million), the highest price achieved for any work by a Post-War Italian artist. It was one of 12 Fontana works offered, of which all but two sold. The 10 Fontana works contributed a rousing £23.3/$36.1 million of the £40.4 million Italian total. The egg-shaped painting with percussive holes distributed across its black surface surpassed the record set by another “La fine di Dio” at Christie’s New York in November 2013, which made $20.8 million.

Even though it was a record, the painting only attracted a single telephone bid, most likely that of the so-called “irrevocable bidder” who guaranteed a minimum price for the picture prior to the sale. Fontana has become the Warhol of the Italian market, even though his works normally sell in contemporary art sales, apart from the annual October Italian-only sales.

The packed room was challenging to auctioneer Oliver Barker, who pleaded for quiet at times against the chatter, and later described the sale as “an Italian embassy party.”

The other Italian star that more than proved his mettle this evening was Alberto Burri, whose current retrospective at the Guggenheim Museum in New York is fueling a super-charged market. Of the four Burri works offered, “Bianco Plastica 1” from 1961, explosively executed in plastic, combustion and tempera on faesite, sold to international art trader David Nahmad for £2,635,400/$4,079,599 (est. £1.5-2 million). New York art advisor Amy Cappellazzo of Art Agency Partners was the underbidder.

“For what was once a localized market,” said New York art advisor Abigail Asher of Guggenheim Asher, “it felt international tonight. We bid on three things and only got one.”

“I think they’re icons,” said Asher, speaking of the series, “and very undervalued.”

Switching to the more familiar and global contemporary terrain after the 90-minute Italian festival, Sotheby’s contemporary sale hit comfortably midway between the £32.9-46.1/$52.9-74.2 million pre-sale estimate. Fifteen of the 53 lots offered went unsold for a somewhat sub-par buy-in rate by lot of 28 percent. Fourteen lots sold for over a million pounds and 18 sold for over a million dollars. Four artist records were set. The result exceeded last October’s £28.2/$45.2 million sale with 52 lots sold.

The contemporary sale got off to a buoyant start with a campy and large-scale figurative work by the young, Latvian-born artist Ella Kruglyanskaya, “Swordfish Picnic” from 2011, dominated in part by an open-mouthed swordfish propped up by a life preserver and posed between three fashionably attired women reading on a very large beach towel. It made its auction debut here, selling for £81,250/$125,775 (est. £40-60,0000).

On that same youthful track, Jonas Wood’s heavily patterned interior, “Rosy’s Masks,” the title referring to the artist’s grandfather and various tribal-like objects pegged on a wall, dates from 2008 and is similarly huge at 101 ½ by 75 inches. It sold for £293,000/$453,564 (est. £200-300,000). Wood in the primary market is waiting list only and perspective buyers reportedly have to acquire two, with one reserved for a museum donation.

Later in the sale, Warhol’s appropriated portrait “Lenin,” from 1986, brought £3,061,000/$4,738,428 (est. £2.5-3 million). There were seven Warhols offered in the sale and it was unusual that the salesroom was missing the presence of Warhol kingpin Jose Mugrabi or other family members. It’s unclear whether his physical absence slowed the Warhol Jetstream, though no doubt Mugrabi monitored the action and perhaps bid via telephone.

In a related Minimal vein, Agnes Martin’s delicately and almost invisibly color banded “Untitled” abstraction from circa 1999-2000, comprised of acrylic and graphite on canvas, went to another telephone bidder for £2,837,000/$4,391,676 (est. £2.5-3.5 million). It was backed by a Sotheby’s financial guarantee.

Commenting on the super-charged result of the Bourgeois shortly after the sale, auctioneer Oliver Barker, Sotheby’s deputy chairman, Europe, who navigated both auctions, said, “Two people fell in love with it and that’s what can happen at auction.”

If you ever wondered where Lucien Smith might have gotten his idea for his fire extinguisher applied “Rain” paintings, the 84 by 60 inch Christopher Wool painting “Untitled (P63)” from 1988, executed in alkyd and flashe on aluminum, is a good candidate. Unfortunately, the Wool was a casualty, missing its mark (est. £500-700,000), and became the property of Sotheby’s since it backed the painting with a guarantee. It last sold at Phillips de Pury, New York in November 2011 for $842,500.

Though it lacks the sought after word cosmology found in some of Jean-Michel Basquiat’s best paintings, “Untitled (The Black Athlete)” from 1982 in acrylic and oilstick on canvas, rated the cover lot with the brawny, haloed figure flexing his bulging biceps. It sold as the top lot to another anonymous telephone bidder for £4,069,000/$6,298,812 (est. £3.5-4.5 million). It last went unsold at auction at Phillips de Pury & Company in New York in November 2004.

The long evening, while largely successful by almost any measure, appeared flat and lethargic at times, perhaps a sign of exhaustion from the still storming Frieze Week. Though a rather unfamiliar Gerhard Richter abstract, “Ausschnitt (Kreutz)” from 1971, an oscillating composition in rather muddy colors, still found its place, selling for £2,613,000/$4,044,924 (est. £1.8-2.5 million). It last sold at Christie’s London in February 2011 for £1,049,250. That would be a win in any stock portfolio. Art advisor Amy Cappellazzo was the underbidder.

“There’s no weakness in the market,” said Simchowitz as he exited the salesroom. “There’s a huge expanding interest growing outside of this zip code zone and I think it’s healthy.” Referring to the just acquired Kiefer for a client, Simchowitz noted, “Kiefer is undervalued and you can buy 10 for the price of one Richter squeegee painting.” Self-serving or not, the statement makes sense.

The evening action week here reaches its finale on Friday evening at Christie’s, with another dual-sale of Italian and Contemporary Art.