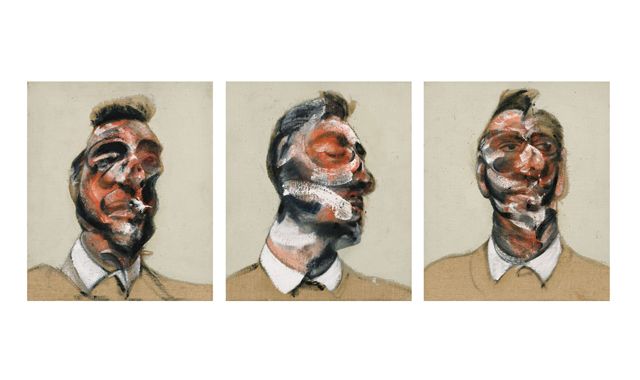 The feel good evening got off to a jaunty start with 11 guaranteed works from a cutting edge New York collection bundled under the catchy title “Ahead of the Curve: The Sender Collection,” including (lot 1) Urs Fischer’s jumbo scaled “Youyou,” comprised of two galvanized cast bronze screws, one bent and one straight, from 2004-12 that sold for £338,500/$575,958 (est. £200-300,000).

Last month in New York, 19 other guaranteed works from Adam Sender, a former hedge fund manager, made $44.6 million in that evening sale.

Andy Warhol’s unmistakable (lot 13) “Dollar Sign (Yellow)” from 1981, large-scaled at 90 by 70 inches and featured in the Leo Castelli Gallery dollar sign exhibition of Warhols the same year, made £4,002,500/$6,810,254 (est. £3-4 million). It carried a so-called “irrevocable bid,” meaning a third-party backer insured the piece would make an undisclosed price no matter what reception it received in the salesroom. The painting was stamped on the back by both the Warhol estate and the Andy Warhol Foundation for the Visual Arts but not signed by the artist, a factor that sometimes negatively influences the price. Another Warhol, (lot 43) “Nine Multicolored Marilyns (Reversal Series)” from 1979-86, sold to another telephone for £4,562,500/$7,763,094.

The star offering of the evening and possibly the standout painting of the season, Francis Bacon’s electrifying (lot 15) “Three Studies for Portrait of George Dyer (on light ground)” from 1964, sold to an anonymous telephone bidder after a fierce bidding battle for £26,682,500/$45,400,274 (est. £15-20 million). Bidding opened at £12.5 million and quickly jumped at £500,000 increments until around £21 million, when the pace cut back to £250,000. Auctioneer Oliver Barker smoothly rode out the bidding battle like a jockey on a thoroughbred horse.

Helena Newman, Sotheby’s seasoned Impressionist and Modern specialist, took the winning phone bid while Patti Wong, the Hong Kong-based chairman of Sotheby’s Asia, was part of the posse of underbidders.

The exquisite triptych, with each 14 by 12 inch oil on canvas framed behind glass, depicts the artist’s lover and muse, arguably the most important subject in Bacon’s oeuvre apart from his celebrated series on popes. It has been tucked away in a Milanese private collection since 1970 and was featured in a traveling Bacon retrospective in 1999 and again in 2008 at Palazzo Reale in Milan.

Wearing a light colored sweater with a crisp white collar showing, the head and shoulders view of Dyer is dramatically different in each swirling canvas, making him appear almost savage-like with a spiky crown of brown hair. Dyer committed suicide in a Paris hotel room two days before Bacon’s retrospective opened at the Grand Palais, in 1971. Other versions of the triptych reside in Louisiana Museum of Modern Art in Humlebaek and the Tel Aviv Museum of Art.

Bacon made some 40 portraits of Dyer, and this example was done during the first year of their meeting, when Bacon caught Dyer red-handed, burglarizing his home in Reece Mews. Dyer was 29 at the time and Bacon was 54.

It is based on a small group of black and white photographs capturing Dyer on a Soho London street corner by John Deakin, his drinking partner and one of Bacon’s key cronies since the artist never painted from life but always from photographs.

“I find it easier to work,” Bacon told critic David Sylvester for a monograph published in 2000, “than actually having their presence in the room.”

None of the Bacons were guaranteed.

The painting debuted at Doig’s breakout solo, “Wing Mirror,” at the Gavin Brown Enterprise in New York the year it was painted and when it was acquired by the seller.

Viewed as it were from the passenger side of a speeding automobile on a highway outside of Toronto, where the Scottish-born artist lived for a time, it captures a famed local landmark of a rainbow colored tunnel entrance, painted by an obsessed local (Berg Johnson) countless times from 1972 onwards until he was eventually banned by the local authorities from the vicinity of the site. The park authorities considered it vandalism and apparently grew tired of painting it over. Today it is venerated and maintained by volunteers.

Two other large-scale versions of the Don Valley Parkway rainbow exist, one of them residing at the Pinchuk Art Centre in Kiev while the other version was shown in Doig’s retrospective at Tate Britain in 2008. “Tunnel Passing (Country-rock),” a smaller and later version from 2000, sold at Sotheby’s London in June 2010 for £265,350/$399,617.

“Finally, I had some luck as a buyer,” said Cardi as he exited the salesroom, “and like a good Italian, I support the Italian artists.”

“We just thought it was a very attractive piece,” said Asher as she departed the salesroom, “and we didn’t want to see an opportunity pass by. For opportunities and great things, the market is absolutely solid on both ends of that spectrum.”

The evening action for this still torrid market resumes at Christie’s Tuesday evening.