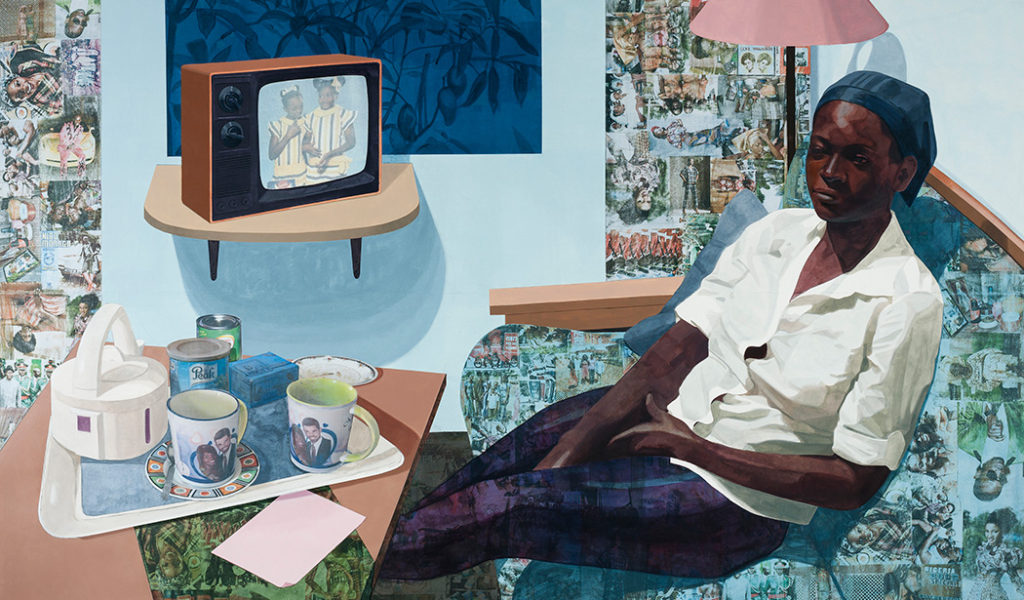 Despite the steady rain and premonitions of a faltering art market, the 47th edition of Art Basel, Europe’s premier modern and contemporary art fair, opened to a long line of umbrella-wielding VIPs who quickly scooped up a broad range of offerings.

At Paris-based Chantal Crousel, a new diptych by Wade Guyton, “Untitled,” in Epson Ultra-Chrome K-3 Inkjet on linen and measuring 128 by 108 ¼ inches, sold in the opening moments of the preview for $600,000 to a French collector. The image, inspired by Guyton’s 2001 “Altered Steel Chair” sculpture, which he deconstructed from a found Marcel Breuer “Cesca Chair” from 1928, depicts the stripped-down and largely unrecognizable skeletal frame set against a grainy abstract background. As at last year’s fair, Guyton parceled out iterations of the identical image to four other galleries that represent him in various parts of the world.

Next door, the L.A./New York gallery Blum & Poe sold Julian Schnabel’s large 1990 abstraction “Painting Without Bingo II,” in oil on distressed army tarpaulin, for around $350,000 to a European collector. “He has such a deep collector base in Europe, we sold it in the first minute,” said founding co-partner Jeff Poe. “Schnabel’s influence is insane and needs to be brought to the forefront.” Massimo De Carlo, of London, Milan, and Hong Kong, sold a primary market, previously unexhibited Rudolf Stingel patterned abstraction from 2014 for somewhere around the $1.8 million asking price, also to a European collector.

A selection of lesser-known and freshly launched younger artists were in demand, as well. At London’s Victoria Miro, “Super Blue Omo,” a 2016 unframed figurative work by the 33-year-old Nigerian-born, L.A painter Njideka Akunyili Crosby, executed in acrylic, transfers, and colored pencil and hung by metal clips, sold to an otherwise unidentified American museum for an otherwise indeterminate five-figure price. The 84-by-108-inch painting — featuring the artist’s mother seated on a couch and watching an old-fashioned TV displaying the image of two young African women, the whole set against a rich background of still-life bric-a-brac and banner-like depictions of family photographs — was offered solely to museums, more than 18 of which are on Miro’s waiting list for works by the artist, according to gallery partner Glenn Scott Wright. “It’s very difficult for us,” said Oliver Miro, the son of gallery founder Victoria Miro, “because she only makes five or six works a year, and collectors who buy a lot of work from us are upset because they can’t buy the work.” At the Armory Show in New York in March, Miro sold another Akunyili Crosby to the Whitney Museum of American Art that is currently featured in “Human Interest: Portraits from the Whitney’s Collection” (through February 2017). Crosby will have her first solo show at Miro in October.

New York’s Jack Shainman Gallery made its first appearance in the main section of the fair this year. In the opening moments, it sold a trio of figurative paintings: Lynette Yiaom-Boakye’s 2016 “Peregrine,” depicting a seated black male figure with a hawk poised on his shoulder, for $100,000; Barkley L. Hendricks’s 1977 “The Twins,” portraying identical women in different-colored suits, one black and one white, for $450,000; and Kerry James Marshall’s 2016 “Untitled (Looking Man),” in acrylic on PVC panel, for $350,000.

During a quick lunch break in the fair’s outdoor garden area, which serves as a tranquil paddock for hungry and thirsty patrons, Robert Manley — the former deputy chairman of Christie’s America and soon to be a senior executive at Phillips, once his garden leave expires — stated, “The market is quite strong and solid, but . . . the atmosphere is not quite as strong or frenzied as six months ago. There’s no longer a sense of urgency [to buy], and when you take that away, that’s a tangible force.”

It certainly felt that way, judging by the relatively short queues for the fair’s famed fatty wursts.

Back inside, there was more blue-chip-level activity. At New York’s Mnuchin Gallery, Brice Marden’s 1981 four-panel “First Window Painting,” composed of oil and paper mounted on board and measuring 48 by 192 inches, sold for around $4 million, and John Chamberlain’s 1973-74 37-by-77 7/8-inch “Honest 508,“ color-charged and unmistakable, with its crumpled auto body parts, went for somewhere in the region of its $3 million asking price. The Chamberlain buyer was Miami art collector and philanthropist Marty Margulies. “It’s a thrilling moment for me,” said Margulies. “It’s such a great addition to my collection.”

The New York and London gallery Dominique Lévy, meanwhile, took the unofficial prize for reaping the highest prices of the opening, selling Piero Manzoni’s Zero Group-era pleated 1958-59 “Achrome,” in kaolin on canvas, for about t $7 million and Frank Stella’s 1964 shaped painting “Slieve More” for in the vicinity of $5.9 million.

At New York’s Acquavella Galleries, the stunning 1964 Tom Wesselmann wall relief “3-D Drawing 1964 (For Still Life #47),” in charcoal and assemblage on gessoed board and measuring 39 by 39 by 8 inches, brought in the neighborhood of $3.5 million, according to Nick Acquavella. “I think they sold it in the first half hour of the fair,” said disappointed New York collector Edward Minskoff, “and it’s one of the best pieces I’ve seen today, especially if you like Wesselmann. Minskoff, seated on a bench just outside the stand’s entrance, added that he had bought another work elsewhere in the fair but declined to identify it. “If you’re a passionate collector, you’re always going to find something.”

New York private dealer David Mugrabi also experienced some misses in the cavernous, two-level Art Basel venue. “We made a few offers and got rejected,” said Mugrabi, quickly adding that they weren’t low-ball offers. “We wanted a Morris Louis painting from the 1960s, and I thought it was a good offer, but I guess not.”

Some dealers far exceeded their expectations. New York’s Paula Cooper Gallery, for example, sold its artists across the board, including a marvelous 1961 sculpture by the ever-contemporary Claes Oldenburg, “Four Pies in a Glass Case,” for somewhere in the realm of $1 million to $1.5 million; Tauba Auerbach’s 2016 primary market abstraction “Grain: Sierpinski” for around $200,000; Donald Judd’s 1969 single stack with green Plexiglas “Untitled,” for approximately $1 million; and two collage-based works from Christian Marclay’s “Body Mix” series — the 1991 “No Heavy Petting” and the 1992 “Skin tight”— for approximately $200,000 apiece. “It’s been very lively from the start,” said Steve Henry, the gallery’s director, “and we’ve seen a diverse group of collectors coming in from the U.S., Europe, Latin America, and Africa.”

In addition to the Oldenburg, Auerbach, and Marclays, the gallery sold Douglas Huebler’s 1973 über-Conceptual work “Duration Piece #77, Brussels, March 1973.” Comprising some two and half dozen color-post-card-style photographs of an almost identical, bucolic fishing scene, shot in time-lapse fashion and mounted along with a typewritten letter signed by the artist that stated in part, “The thirty photographs joined with this statement to constitute the form of this piece,” it went to a Latin America-based foundation for approximately $200,000. Also scooped up was an untitled Rudolf Stingel triptych for a sum that remains undisclosed, in deference to the artist’s aversion to divulging prices. He shouldn’t be worried.

Multiple sales were made at Thaddaeus Ropac, of Paris, Salzburg, and (soon) London. Making approximately $500,000 each were three large figurative works by Georg Baselitz, including the 2015 120-by-82-inch “Hohne Hemd auf der Matratze liegen,” executed in oil on linen and portraying an upside-down male nude minus his head. Romanian-born market hot shot Adrian Ghenie’s 2016 painting “Degenerate Art,” measuring 200 by 172 centimeters, brought $400,000. And Robert Rauschenberg’s 1983 “Untitled (Spread),” in solvent transfer, fabric collage, acrylic, and wood-on-wood panel, went for approximately $1 million. “If it had not sold,” said Ropac, who represents the Rauschenberg estate, “I would be very worried.” Asked how this year’s action at Art Basel compared to last year’s, Ropac added, “For us, not an inch of difference.”