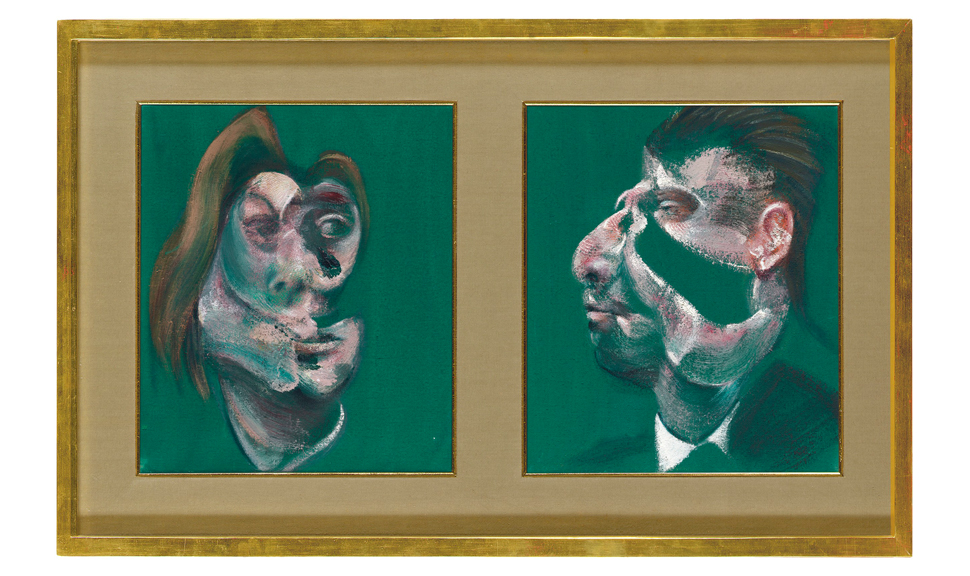 LONDON — Though largely absent of fireworks and stung by a quartet of unsold Gerhard Richter paintings, the art market maintained its steady course at Christie’s Post-War and Contemporary art evening sale that tallied £95.6/$150 million.

Twenty-four lots sold for over a million pounds and 36 sold for over one million dollars. Of those, two Francis Bacon works exceeded £10 million. More impressively on that crowded scorecard, six artist records were set.

Another photo-based work by Richter, “Baume im Feld (Trees in Field)” from 1988, depicting a sunny countryside vista, and already owned by Christie’s, according to the printed symbol in the catalogue, died at a chandelier bid £3.8 million (est. £4-6 million).

When asked about the seeming Richter market burnout after the sale, Brett Gorvy, Christie’s chairman and international head of Post-War and Contemporary art, attributed it to the relative darkness of the pictures on offer and their more intellectually demanding content. It’s “not where the market is strongest,” he said. “New buyers prefer more decorative, more colorful works.”

On the British/Irish front, “Study for Head of Isabel Rawsthorne and George Dyer,” Francis Bacon’s intensely matched portraits, each measuring 14 by 12 inches and dated 1967, attracted four bidders and sold to a telephone manned by a Chinese-speaking client specialist for the evening’s top lot at £12,178,500/$19,108,067 (est. £8-12 million). New York art advisor Sandy Heller was part of the posse of underbidders. The works, capturing two of Bacon’s closest intimates and both set against an emerald hued background, were included in the Metropolitan Museum of Art’s 2009 retrospective. It is the first of only 10 diptychs the artist created in his lifetime. Rawsthorne remained a trusted friend and muse throughout Bacon’s lifetime while his lover George Dyer committed suicide on the eve of Bacon’s retrospective in Paris at the Grand Palais in 1971. The diptych was offered but went unsold at Art Basel in 2014, when it was exhibited at the Acquavella Galleries’ stand in Basel.

Back to America, of the three Andy Warhol offerings, “Five Deaths” from 1963, a stunning though unsigned single panel work from his iconic Death and Disaster series, fetched £3,890,500/$6,104,195 (est. £2.2-2.8 million). The newspaper sourced grisly image of an overturned car with its bloodied crash victims is frozen in time with its all-over blood red hued vista. The anonymous consignor acquired it in 2006 from the Gagosian Gallery, according to the catalogue entry.

Other high-value American artist lots included Christopher Wool’s patterned and yellow hued abstraction “Mad Cow” from 1997, in enamel on aluminum, which sold for £3,442,500/$5,401,283 (est. £4-6 million). The Wool last sold at auction at Christie’s London in February 2013 for £2,281,250. According to the Christie’s catalogue, it is one of only four works by the artist rendered in color.

Post-War Italian art was also on offer, with Alberto Burri’s burnt mixed-media work “Blanco plastica P” from 1970, which sold to New York art advisor Todd Levin for £2,210,500/$3,468,275 (est. £2-3 million). The Burri was backed by a third party guarantee, one of five third party guarantees in the evening.

“I think Boetti Mappas are icons of 20th-century art,” said Asher, moments after her purchase for a private American client, “and there’s certainly room for that market to grow and for those prices to increase.”

Confounding almost any category, Yves Klein’s other-worldly abstraction “peinture de feu couleur sans titre, (FC 27),” or so-called “fire color paintings” from 1962, executed in the last year of his life in dry pigment, synthetic resin, and varnish on a flame licked board and housed in the artist-made frame, sold to Scarlet Smatana of the Athens’ based George Economou Collection for £5,906,500/$9,267,299 (unpublished estimate in the region of £5 million). It also was backed by a third party guarantee.

Though younger artists have largely vanished from the big-ticket item evening sales and are relegated to day sale status, or placed at the very beginning of the evening sales as mentioned earlier, there are some notable exceptions. R.H. Quaytman’s “Contructivismes, Chapter 13,” from 2004-09, an intellectually challenging, carefully compartmentalized shelving unit construction in silkscreen ink and gesso on wood, made a record £578,500/907,667 (est. £300-500,000). Jay Jopling was the underbidder.

The evening action resumes for its final round of the season on Wednesday at Sotheby’s, where three major Francis Bacon paintings await their fate.