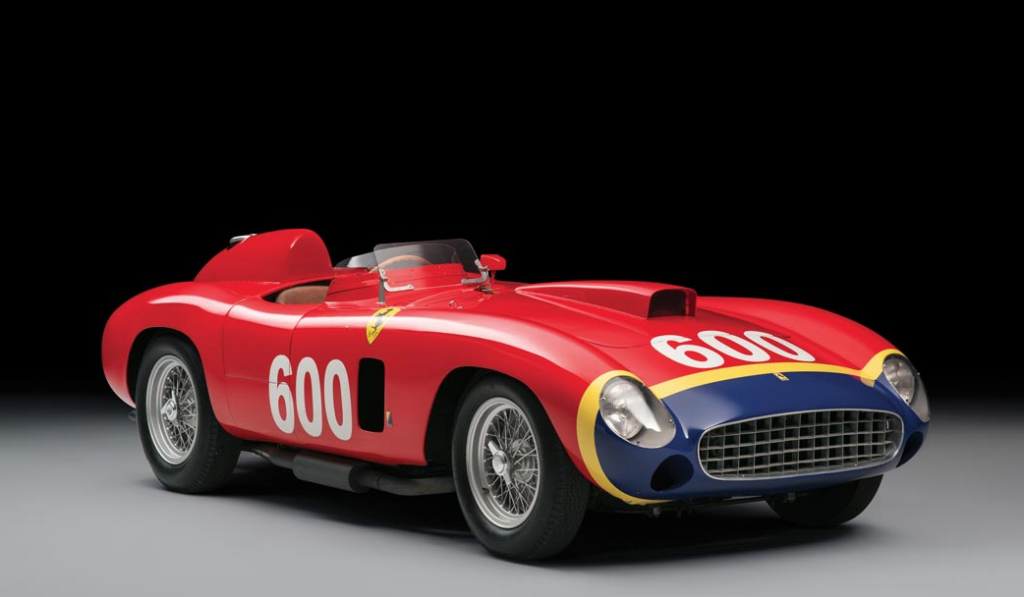 In its second New York outing, the hybrid classic car auction partnership of RM Sotheby’s delivered a somewhat underpowered $76.1 million. Ten of the 31 vehicles offered went unsold for a flabby buy-in rate of 32 percent by lot.

In addition to the cars, 27 lots of various automotive memorabilia such as rare car posters and miniature car models — including a full-sized streamlined and futuristic Carlo Mollino racecar model that made $718,750 — tallied $980,375. Those memorabilia-related lots carried a higher, 15 percent buyer’s premium and barely exceeded the low end of the $960,0000-1,325,000 pre-sale estimate.

More troubling, the tally for the automobiles fell well below its pre-sale expectations pegged at $93.2-111.45 million.

Still, the evening topped RM Sotheby’s debut classic car sale in November 2013 that made $62.8 million and included a 1964 Ferrari 250 LM by Carrozzeria Scaglietti, which brought $14.3 million. The 2013 evening sale delivered a much tighter seven percent buy-in rate by lot.

Prices reported for the motorcars include the hammer price plus the 10 percent buyer’s premium. Estimates do not reflect the added on commission fees.

Seventeen of the 21 vehicles that sold made more than a million dollars, led by a rare, 1956 290 MM Ferrari by Scaglietti, the ferociously race proven and glorious sports prototype racing car that sold to an anonymous telephone bidder for $28,050,000 (est. $28-32 million). It was backed by a pre-arranged and secret financial guarantee by RM Sotheby’s, the only guaranteed lot in the sale. It isn’t known whether the house made any money on its guarantee.

Four bidders chased the historic racecar that was campaigned by revered Ferrari Grand Prix drivers such as Juan Manuel Fangio and Phil Hill. It became the second most expensive Ferrari, or for that matter, any car to sell at auction, only outrun by the unparalleled 1962 Ferrari 250 GTO that sold at Bonhams’ Quail Lodge in California for $38,115,000 in August 2014.

The Ferrari marque, akin to prime postwar art works by Lucio Fontana, are at the top of the collector car market.

While the 290 MM Ferrari hit the low estimate after the premium was added, much like many of the offerings that struggled against aggressively high estimates, one car, a 1964 Porsche 356C 1600 SC Cabriolet, had no trouble hitting the bidding stratosphere. Owned and driven by the rock ’n’ roll legend Janis Joplin and custom painted in the psychedelic patterns and color of those days, the car drew out seven bidders who drove the price to $1,760,000 (est. $400-600,000). The estimate reflected current market rates for that sought after model but without the cultural icon quotient. Until its appearance at Sotheby’s during the weekend view, the Porsche had been on display in Cleveland for 20 years at the Rock and Roll Hall of Fame.

“Driven by Disruption,” the catchy if bewildering title of the sale, relates, according to the auction catalogue, to each of the car’s “marked disruption of the predominant styles of their time.” It felt a bit like recent attempts in the auction world to “curate” sales, such as Christie’s “The Artist’s Muse” or “Looking Forward to the Past.”

Thursday evening’s performance had plenty of theatrical color and the assembly of historic cars installed on the 10th floor at York Avenue was truly jaw-dropping, but it still wasn’t enough to get beyond the relative and closely watched values of the objects themselves, tracked by data bases akin to those used for gauging price points in the art world.

In terms of standout beauty, the clear winner was the 1962 Aston Martin DB4/GT, whose body was designed by the Italian firm Zagato. The British/Italian hybrid sold for $14.3 million (est. $15-17 million). It was the 14th of just 19 iterations made by the famed coach builder, and like many entries in the evening had been restored to the nines by specialists in the field, making it look brand new. The car was campaigned by its first Australian owner in the 1962 racing season. Its more recent history included 20 years of static storage before its gussied up restoration.

Among the disappointing casualties, a celebrated and race proven 1955 Mercedes-Benz 300 SL “Sportabteilung Gullwing” bought in at $4.2 million (est. $5-7 million), spurring the facile, London-based auctioneer Max Girardo to announce after the last bid, “It’s not quite enough, I’m afraid.”

He had to repeat that refrain too many times.

On the American kitsch front, an outrageously accessorized and custom 1963 Pontiac Bonneville “Roy Rogers” Nudie Mobile, including six-shooter mounted door handles and a deluxe saddle (but no Trigger) wedged between the tooled bucked seats, sold for $308,000 (est. $250-350,000). It had resided in the Roy Rogers-Dale Evans Museum for more than 45 years.

It’s still too early to judge whether the once booming and uber frothy classic car market has toned down several notches. The brunt of US sales take place on the West Coast in Pebble Beach country in August, and New York sales are relatively newer to the market.

Last month, the newly formed Keno Brothers car auction entity staged its first sale in New York, titled “Rolling Sculpture,” which made an anemic $8.3 million, with 20 of the 40 entries failing to find buyers. It was led by a superb 1968 Bizzarrini Strada 5300 sports car that sold for $1,010,000.