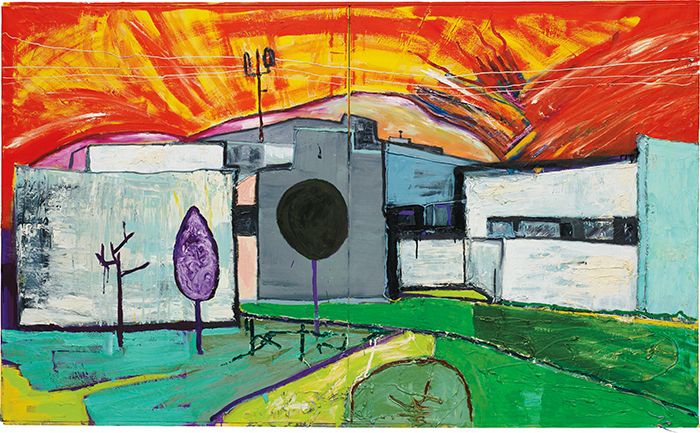 The $1.36 billion auction week of postwar and contemporary evening sales in New York had its low-key finale at Phillips on Thursday, turning in a solid though hardly exceptional $51,964,750. The decent tally fell close to midway between pre-sale expectations of $45,760,000-67,790,000 million, though estimates do not include the buyer’s premium pegged at 25 percent up to an including $100,000, 20 percent up to and including $2 million, and 12 percent for anything above that.

Eight of the 47 lots offered failed to sell for a workmanlike 17 percent buy-in rate by lot. Fifteen of the 39 works that sold made over a million dollars and of those, one made over five million dollars. Better still, three artist records were established. Tonight’s results, however, trailed last November’s $68,15,750 tally for the 35 lots sold.

Like its much larger rivals Christie’s and Sotheby’s, Phillips financially guaranteed 14 lots, in direct third party deals, according to the auction house.

“Our sale,” said Edward Dolman, the newly installed CEO of Phillips, “had less of a percentage of guarantees than the other houses. We took a more cautious strategy this sale.”

Danh Voh’s guaranteed sculpture, (lot 3) “We the People (detail)” from 2011, part of the artist’s massively ambitious Statue of Liberty project consisting of 400 fabricated copper pieces as a reprise of the fabled American landmark, and comprised in this case of six copper parts, made a record $629,000, selling to New York private dealer Phillip Segalot (est. $300-500,000).

Utilizing another famous brand name, (lot 4) Ai Weiwei’s “Coca Cola Vase” from 2011, comprised of a Neolithic era ceramic vessel with the trademarked Coca-Cola name spanning the breadth of the pot in perfect script, sold to a telephone bidder for $665,000 (est. $400-600,000).

On a larger scale, (lot 5) art market darling Alex Israel’s arch shaped architectural abstraction, “Untitled (Flat)” from 2012, fabricated in acrylic on stucco, wood and aluminum frame, complete with the stamp “MADE AT WARNER BROS. STUDIOS BURBANK CA,” sold to another telephone for $341,000 (est. $300-500,000).

Opposite of a readymade, (lot 7) Tauba Auerbach’s “Untitled (Fold)” from 2010, an intricately creased canvas painted in trompe-l’oeil style, sold to a telephone bidder for a record $2,285,000 (est. $1.5-2 million). New York dealer Andrew Fabricant of Richard Gray Gallery was the underbidder. It also carried a third-party guarantee. It vanquished the record set at Phillips London in October when “Untitled (Fold),” another work from the series, but larger at 80 by 60 inches, made £1,142,500/$1,823,041.

Nate Lowman’s (lot 15) explosive, bullet holed shaped canvas, “Pink Escalade” from 2005, in silkscreen ink on canvas laid on panel, sold to New York dealer David Mugrabi for $545,000 (est. $500-700,000). It last sold at Sotheby’s London in February 2010 for £51,650/$80,614 and more recently was exhibited in “Nate Lowman: I WANTED TO BE AN ARTIST BUT ALL I GOT WAS THIS LOUSY CAREER,” at the Brant Foundation in Greenwich, Connecticut. One might hazard a wild guess as to the identity of the seller.

Wade Guyton’s (lot 8) printed flame on canvas, “Untitled” from 2006 and standing at 90 by 53 inches, sold to a telephone bidder for $4,645,000 (est. $4-6 million). It was also backed by a third party guarantee. Looking back, Phillips debuted Guyton in its November 2008 evening sale when a similarly scaled untitled work generated from an Epson Ultra Chrome Inkjet on linen from 2007 sold for $134,500. Some might say (about that market) that auction moment dated from the good old days.

Late, as in deceased, superstars were also present, as evidenced by Martin Kipppenberger’s (lot 10) wildly colored “”Untitled” landscape with modern architecture composition from 1984, that sold to Zurich dealer Doris Ammann for $2,345,000 (est. $1.5-2.5 million). According to auction catalogue notes, the chunky structure was modeled after the Betty Ford Clinic, a posh rehab hideaway for drug addicts in Rancho Mirage, California.

“Now I have it back,” said Ammann as she exited the 57th Street salesroom, explaining she formerly owned it, and referring to the clinic, “not that I have to go there.”

It as well carried a third party guarantee.

Though a solid price for an always unusual Kippenberger, it came nowhere near the stratospheric and record $22,565,000 garnered for “Untitled,” the artist’s rather comical self-portrait in underpants from 1988 that sold at Christie’s Wednesday evening.

Phillips seems to be driving towards more blue chip, postwar works, distancing itself a bit from its stellar reputation of showcasing up-and-coming art stars in the secondary market arena.

It was Phillips’ priciest offering and came armed with a financial guarantee.

In a more Ab-Ex era vein, Mark Rothko’s (lot 22) petite-scaled yet luminous oil on paper, mounted on Masonite, “Untitled” from 1959, sold to a telephone bidder for $4,085,00 (est. $3-5 million). Mnuchin Gallery was one of the underbidders in the salesroom. It too was guaranteed.

Though not the real McCoy, (lot 38) but a masterfully executed copy, Elaine Sturtevant’s brilliantly mimed enamel on canvas, “Stella Tomlinson Court Park (First Version) (Study)” from 1990 drew a torrent of bidding before selling to an anonymous telephone for $557,000 (est. $100-150,000).

“I love his work,” said Odermatt as he headed for the exit. “It’s the eighth in my collection and only two have been bought at auction.”

Asked about his impression of the week, Odermatt answered, “I think it was one of the best weeks for contemporary art at auction ever.”