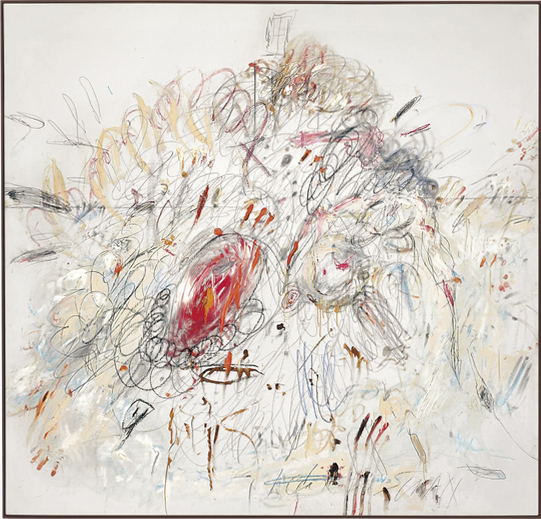 Studded with top class and fresh to market works, Christie’s pulled off a stunning evening sale of Post-War and Contemporary art, tallying $448,062,000 for the 68 lots that sold.

Despite a savage day on Wall Street, only three of the 71 lots offered failed to sell for a stellar and almost unheard of buy-in rate by lot of four percent.

The tally shot to the high end of pre-sale expectations pegged at $339-462 million.

Fifty-five of the 68 works that sold made over a million dollars and of those, five sold in excess of $20 million.

The total hammer price before fees was $391,280,000, a convincing market testament to an unassailable salesroom triumph.

Even so, the evening was heavily backed by third party guarantees (38) and one house guarantee.

The Pictures Generation artist is currently the subject of a retrospective at the Museum of Modern Art and the price bears in part the fruits of that recognition.

A chilling photograph reproduced in the auction catalogue of the artist standing in front of the painting in his studio and pointing a toy gun to his head was taken less than a year before his death from a drug overdose.

A second Basquiat, “Untitled” and also from 1987 but executed in wax crayon, color pencil, graphite and ink on paper covers every inch of the composition with a crazy, encyclopedia like display of the artist’s fascination with history, Greek legend and graffiti culture. It realized $2,407,500 (est. $1.2-1.8 million).

“I was ready to go higher,” shouted Mavrommatis as he exited the salesroom, adding parenthetically and with equal glee that he was the seller of the cover lot Picasso at Christie’s on Monday evening, “Femme assise robe bleue” (1939) that made $45 million.

A large-scale Joe Bradley abstraction, “Flattop” from 2011, executed in dirt smeared oil on canvas and once featured in Vito Schnabel’s exhibition, “White Collar Crimes” at the Acquavella Galleries in 2013 made $1,207,500 (est. $1-1.5 million).

In a decidedly more ethereal vein, Cy Twombly’s exquisite and monumental composition, “Leda and the Swan” from 1962, beautifully executed in oil, lead pencil and wax crayon on canvas, appears as if fresh from the artist’s studio, sold to dealer Larry Gagosian for the top lot price of $52,887,500 (est. $35-55 million).

“That was a pretty good sale,” said Gagosian, who also bought Roy Lichtenstein’s “Expressionist Head” in painted and patinated bronze with painted wooden base from 1980 for $3,127,500, as he exited the Rockefeller Center salesroom, “but it was a rough day for the world and we’ve got bigger problems than buy-ins.”

Prime property from the estate of storied and vanguard New York collectors Emily and Jerry Spiegel took up almost a quarter of the evening sale with 25 lots offered and that delivered $116 million compared to pre-sale expectations in excess of $80 million.

All of the Spiegel property was backed by individual third party guarantees, erasing much of the potential drama for such fresh and long cloistered works to appear at auction.

The adventuresome couple bought it early in their collecting life pursuit at a Sotheby’s New York auction in May 1982 for $3,960.

Looking back now, so many of the works seemed eerily prescient, as evidenced by the Spiegel’s Francis Picabia, “Adam et Eve” from circa 1941-42 and that recently appeared in the artist’s retrospective at the Museum of Modern Art. It realized $3,367,500 (est. $1.5-2 million).

New York/London dealer Per Skarstedt was the underbidder on both the Fischl and the Salle.

German bred artists were also deeply represented, including the Sigmar Polke cover lot, “Frau mit Butterbrot,” a Pop Art icon from 1964, composed in a splendidly uniform array of Ben Day dots and measuring 63 by 55 inches that sold to a telephone bidder for $17,047500 (unpublished estimate in the region of $20 million).

Paris/Salzburg/London dealer Thaddaeus Ropac was the underbidder on the Beuys.

Both the Polke and the Richter were acquired from the Marian Goodman Gallery in 1985.

Deitch sat next to storied Miami art collector Norman Braman and bought the Gober on his behalf.

Pictures Generation starlet Cindy Sherman was also in the brilliant mix with “Untitled Film Still #21,” an 8 by 10 inch gelatin silver print from 1978 featuring the artist as a young career girl set against a backdrop of Wall Street skyscrapers, sold to New York private dealer Philippe Segalot for $871,500 (est. $500-700,000).

The couple acquired the work in 1989 from the Janet Borden Gallery in SoHo.

“It’s tough,” said Segalot as he left the salesroom, referring to the auction atmosphere, “it’s not the same market as it was a couple of years ago.”

It was consigned by Paris based noted design dealer Patrick Seguin who acquired the work directly from the artist in 2011.

“I’m building a house in the south of France with Jean Nouvel and I made the decision to sell the painting.”

In the 1 Percent Blue Chip realm, Francis Bacon’s stirring triptych, “Three Studies for a Portrait of George Dyer” from 1963, with each canvas measuring 14 by 12 inches and depicting another distorted view of the handsome sitter, sold to a telephone bidder for $51,767,500 (unpublished estimate in excess of $50 million).

It now ranks as the 6th most expensive Bacon at auction.

Dyer, of course, one of the artist’s serial subjects, was Bacon’s lover who tragically committed suicide in Paris on the eve of Bacon’s breakout retrospective at the Grand Palais in 1972.

The Lichtenstein was also backed by a third party guarantee as was Andy Warhol’s hand painted in casein and graphite on linen (not silkscreened) “Big Campbell’s Soup Can with Can Opener (Vegetable)” from 1962 that sold to another telephone bidder for $27,500,000 (unpublished estimate in excess of $26 million).

Basquiat made another curtain call with the menacing, uniformed figure, “La Hara” from 1981 in acrylic and oilstick on wood panel that sold in the salesroom for an estimate topping $34,967,500 (est. $22-28 million).

“I work for a collection,” said the elegantly attired, British accented woman as she exited the salesroom immediately after her winning bid, declining to further identify herself or her client.

The widely exhibited early work formerly resided in the Glenstone Foundation based in Potomac Maryland.