Skip to contentSkip to content
Blouin Artinfo
Christie’s Latest Blockbuster Edges Closer to the $1B Mark
November 12, 2014 by Judd Tully 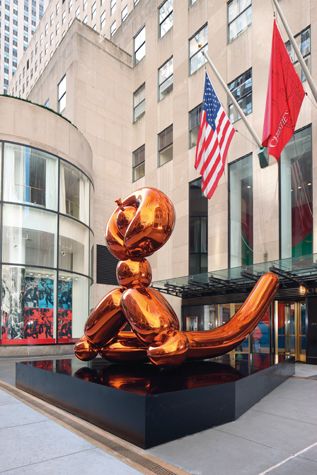 Christie’s yet again set a record for all auctions everywhere on Wednesday evening at its Rockefeller Center headquarters in New York, taking in a mind-boggling $852,887,000 for 75 works of art.

Only five lots failed to sell, for a svelte buy-in rate of six percent by lot.

“It’s a masterpiece-buying market,” said Brett Gorvy, Christie’s global head of Post-War and contemporary art, after the sale, “and tonight collectors really stretched for the best.”

The long evening got off to a youthful start with Seth Price making his evening sale debut at Christie’s with “Vintage Bomber” from 2006, a gold hued, vacuum formed high-impact polystyrene facsimile of a bomber jacket, which sold for a record $785,000 (est. $50-70,000).

Things quickly got more serious with Georg Baselitz’s massively scaled painting of mostly upside-down figures, “Der Bruckechor (The Brucke Chorus)” from 1983, evocative of Edvard Munch’s “The Scream,” which sold for a record $7,445,000 (est. $5-7 million). It was backed, not that it mattered, by a third party guarantee.

The stakes remained high with Robert Gober’s “Three Urinals” from 1988, a wall-mounted trio in enamel, plaster, wire lath and wood, but in that case fireworks failed to ignite. Despite Gober’s current start turn as the subject of a widely praised Museum of Modern Art retrospective, the work barely cleared its low estimate, bringing $3,525,000 (est. $3.5-4.5 million). Still, it had last sold at auction for just $145,500, at Christie’s New York in May 1996. On that long-ago evening, the top lot—a Willem de Kooning masterpiece, “Mailbox” from 1948—made $3.7 million.

Christie’s managed to pull two rabbits out of its hat with what has to be the season’s most hyped pair of large-scale Andy Warhol paintings: “Triple Elvis (Ferus Type)” from 1963, executed in silkscreen ink and silver paint on linen, brought the top-lot figure of $81,925,000 (unpublished estimate in the region of $60 million), making it the second highest priced Warhol ever to sell auction, while “Four Marlons” from the same year, depicting the leather jacketed Brando on his motorcycle in “The Wild One,” became the third, fetching $69,605,000 (unpublished estimate in the region of $60 million). Both works attracted multiple bidders and sold separately to anonymous telephone bidders.

Both Warhols had been on long-term display in a German casino chain owned by the Spielbank Aachen from 1977 to 2009, having been were purchased by the bank in the 1970s from the late and legendary Zurich dealer Thomas Ammann. The bank paid approximately $83,000 for “Triple Elvis” in 1977 and a bit more for the “Four Marlons” in 1978. They’ve been in storage for five years and according to Gorvy, both will be on public view in the near future.

Christie’s guaranteed both lots at undisclosed sums, but the house would seem to have made a tidy profit on staking the two works.

Warhol mogul Jose Mugrabi, whose family owns the largest collection of Warhols in the world, laconically appraised the pair as he exited the salesroom. “Elvis is nice, very nice, and Marlon is just nice. Elvis is more iconic, but I think both of them are great.”

Though painted decades after the prime of the Pop Art movement, Roy Lichtenstein’s massive and romantic reprise, “Reflections on the Prom” from 1990, dominated by a oscillating field of oversized Benday dots, sold to an anonymous telephone bidder for $21,445,000 (unpublished estimate in the region of $15 million). It had last sold at Christie’s New York in May 2008 for $8,777,000.

There were six other Lichtensteins to choose from in the sale, assuming your pockets were deep enough, including “Sunrise” from 1965, which sold to another telephone bidder for $16,405,000 (est. $12-18 million), and the early and graphically stunning “Hot Dog” from 1964, in graphite, brush and India ink on Japanese paper, which sold to New York dealer Andrew Fabricant of Richard Gray Gallery for $4,421,000 (est. $1.5-2 million).

“If you’re a mogul, what do you do with your money,” Fabricant asked rhetorically as he left the salesroom. “You don’t put it in a CD.”

Christie’s suffered one expensive guaranteed lot buy-in with Lichtenstein’s 1961 work “Keds,” an oil on graphite on canvas that flopped at an imaginary $19 million (est. in the region of $20 million). You could almost hear Sotheby’s cheering.

But the standout Pop Art lot was Ed Ruscha’s striking text painting “Smash” from 1963, a large work depicting its title in precisely crafted yellow letters across a dark blue ground (and repeating it three more times in smaller lettering elsewhere on the canvas). It sold for a record $30,405,000 to Larry Gagosian, the artist’s primary market dealer (est. $15-20 million). Christophe van de Weghe was the underbidder, and Fabricant also chased the Ruscha.

The picture had debuted in New York at the Ferus Gallery in May 1963, and was once owned by former Museum of Modern Art board president Donald Marron.

Abstract Expressionist works were in short supply, though Franz Kline’s large-scale and surprisingly color-charged “King Oliver” from 1958 sold to a telephone bidder for $26,485,000 (est. 25-35 million). The title is a reference to Louis Armstrong’s King Oliver’s Creole Jazz Band.

A Clamdigger had never before appeared at auction. This one—which previously stood guard outside de Kooning’s studio in East Hampton—was sold by the Lisa de Kooning Trust, established by the artist’s late and only daughter, who died at age 56 in 2012.

Another sculpture, Jeff Koons’s huge “Balloon Monkey (Orange)” from 2006-2013, had been displayed on the sidewalk in front of Christie’s during the month leading up to Wednesday’s sale. Wildly reflective in mirror-polished stainless steel with a transparent color coating, the Koons sold to the telephone for $25,925,000 (est. $20-30 million). It ranks as the fifth most expensive work by the artist sold at auction.

Peter Doig’s lusciously painted “Pine House (Rooms for Rent)” from 1994, depicting a burned-out hulk of a rooming house in grand, 70-by-90¾-inch scale—it was one of the standout works in the artist’s 2008 Tate Britain retrospective—sold for a record $18,085,000 (unpublished estimate in the region of $15 million). It had first been exhibited at Gavin Brown’s Enterprise in New York the year it was painted, well before Doig gained an international reputation.

And a work by another British star, Lucien Freud’s 48-by-60-inch oil “Julie and Martin” from 2001, depicting in Freudian detail a reclining nude female figure with eyes closed and head resting on her companion’s clothed, lap sold to a young Asian bidder in the salesroom for $16,965,000 (est. $15-20 million). It had been included in the Freud traveling retrospective organized by Tate Britain in 2002.

If any lot in this almost fantastical sale epitomized the market hunger, it would be Cy Twombly’s gorgeous blackboard painting “Untitled” from 1970, cerebrally executed in house paint and wax crayon on canvas.

Bidding opened at $24 million, already a record, and continued at a crazed pace, drawing bidders including David Zwirner, Andrew Fabricant, and David Nahmad before the telephone artillery took over to reach the $62 million hammer price ($69.6 million with buyer’s premium).

The evening action ends at Phillips on Thursday night, capping a rather extraordinary and action-packed art commerce week.