Skip to contentSkip to content
Artnews
Christie’s Imp-Mod Sale Brings in Market-Affirming $399 M., With Records for Balthus and Bonnard
May 14, 2019 by Judd Tully 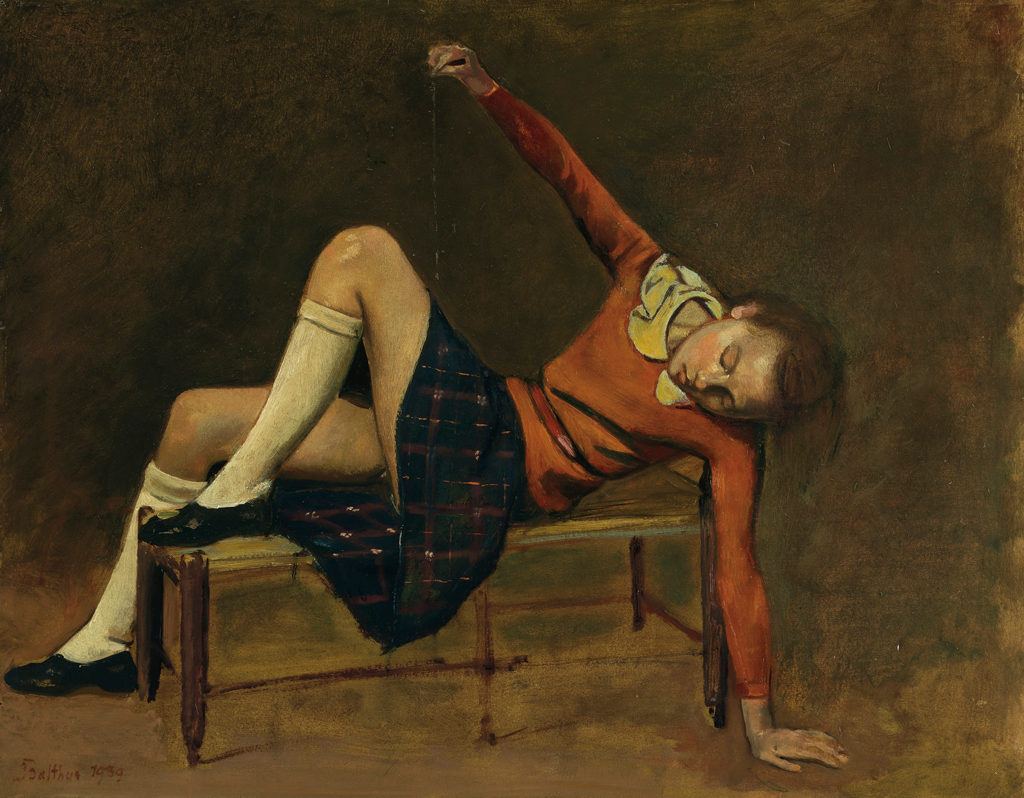 Despite a jaw-dropping day on Wall Street with the Dow tumbling more than 600 points, the art market performed in a gold-framed bubble with Christie’s Impressionist and Modern evening sale racking up a buoyant and market-affirming $399 million. The tally, including fees, hit the top end of the pre-sale estimate range of $287.6 million to $399.8 million. (Estimates do not include the buyer’s premium, and the hammer total was $343.4 million.)

Of the 63 lots offered, nine failed to sell, for a trim buy-in rate of 14 percent. Of the 54 lots sold, 45 made over $1 million, with six hurdling the $20 million mark. The tally came close to the $415.8 million result for the same sale at Christie’s last year, led by a Kazimir Malevich, Suprematist Composition, that fetched $85.8 million.

Two artist records were set on Monday night. In terms of guarantees, for which certain lots receive pre-sale financial backing, five works rated third-party guarantees from investors outside of Christie’s, and three held stand-alone guarantees by the auction house. Third-party backers receive an undisclosed financial fee from the house for the risk taken, and it paid off handsomely, with the top two lots on Monday night powered in part by guarantees. 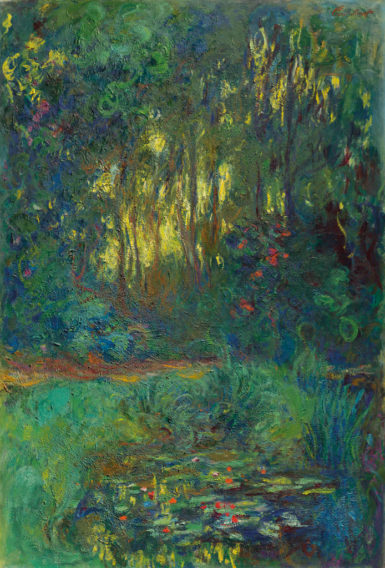 In the sixth lot, another Picasso (one of seven offered in the sale)—Course de taureaux, a confident early bull-fighting scene executed in gouache and pastel on board in 1900—realized a bargain $2.66 million (est. $3.5 million–$5.5 million). It last sold in Paris at Galerie Charpentier in 1959 for what would be approximately $3.7 million in today’s value.

Price points and rarity to market jumped higher with Balthus’s racy and enigmatic figure of a girl reclining on a bench, Therese sur une banquette (1939), selling to a telephone bidder for an artist-record $19 million (est. $12 million-$18 million). Attired in white stockings, a thigh-bearing skirt, and a coral-hued sweater, the girl appears to be holding the string of a yo-yo with one outstretched arm as the other delicately balances her grip on the floor for support. It was backed by a third-party guarantee and was featured in the Metropolitan Museum of Art’s 2013 exhibition “Balthus: Cats and Girls.”

Among a group of five Claude Monet offerings from various vendors, Le pont japonaise, a late work stamped with the artist’s signature and painted at Giverny circa 1918-1924, sold for $12.8 million (est. $12 million-$18 million). Generally, the market prefers and places a higher value on Monet works actually signed by the artist over unsigned works that were catalogued at this studio after his death in 1926. Tonight it didn’t seem to make much of a difference, as another Monet bearing a stamped signature, Coin du basin aux nympheas (circa 1918-1919), drew out three bidders and sold over the phone for $21.8 million (est. $15 million-$25 million).

Another offering from a group coined and marketed by Christie’s as “French Pastoral,” Pierre-Auguste Renoir’s bucolic plein air composition Le pecheur a la ligne from 1874 (around the year Impressionism came to be known) sold to another phone bidder for $8.79 million (est. $8 million-$12 million). It last sold at Sotheby Parke Bernet & Co. in London in 1979 for £610,000 (around $790,500). 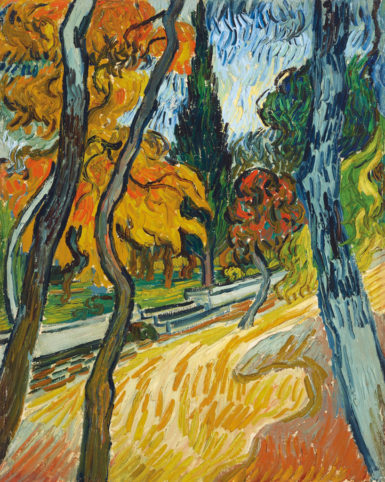 A stunning and widely exhibited interior scene by Edouard Vuillard, La table de toilette (1895)—bearing intense decorative motifs and blended color schemes that can make a viewer dizzy—sold on the phone for $7.99 million (est. $5 million-$8 million). Once part of a five-panel suite known as “The Album” commissioned by the French patron Thadée Natanson, the group was eventually dispersed, and the Vuillard panel is one of only two that are privately owned, with the rest harbored in museum collections. It last sold at auction at Christie’s New York in November 1989, at the height of that decade’s art boom, for $7.7 million.

The London-based dealer Francois Odermatt, an underbidder on the Vuillard, came back to snag Pierre Bonnard’s sweet 1910 interior Jeunes filles au chien (Deux des filles d’Alexandre Natanson) for a bargain $735,000 (est. $1 million-$1.5 million). That price paled next to the winning bid for Bonnard’s masterful 1912 La Terasse ou Une terrrasse a Grasse, which sold to yet another anonymous telephone bidder for a record $19.6 million (est. $5 million-$8 million).

The big-selling Bonnard was one of several standout examples from a small group of works from the collection of Drue Heinz, the late British-born actress, socialite, publisher, and philanthropist who married the ketchup magnate H.J. Heinz. Another Heinz standout was Amedeo Modigliani’s Lunia Czechowska (a la robe noire), a portrait of a pale beauty from 1919 that brought in $21.8 million (est. $12 million-$18 million). It has resided in Drue Heinz’s collection since 1954 and last appeared in public in 2006 in the Royal Academy exhibition “Modigliani and his Models.”

Though better known for his market exploits in collecting post-war and contemporary art, the late New York publisher S.I. Newhouse had an eagle eye for earlier work, as evidenced by Vincent van Gogh’s richly impastoed and fall colored cover lot Arbres dans le jardin de l’asile. Painted in Saint Remy in 1889, the work attracted four phone bidders and sold for $40 million (on an unpublished estimate in the region of $25 million).

Another Newhouse jewel, Paul Cezanne’s Bouilloire et fruits—a ravishing still life by the master from 1888-1890—sold to a phone bidder for the evening’s top lot price of $59.3 million (over an unpublished estimate in the region of $40 million). Newhouse acquired the painting at Sotheby’s London in 1999 for £18.2 million (around $26.5 million). 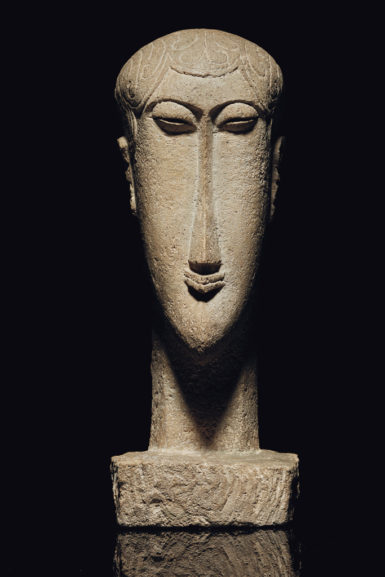 Tobias Meyer, the former worldwide head of Sotheby’s contemporary art and its onetime star auctioneer, navigated the Newhouse deal with Christie’s, a shock for those who remember his long association with the house’s archrival. At Christie’s, he watched the action from an aisle seat near the front of the uncrowded salesroom.

At a press call of highlights before the sale last week, Meyer was on hand to talk about Newhouse and said, “He was the most happy in the presence of greatness.” On Monday, four works from Newhouse’s collection made a cool $100.9 million.

As for sculpture, the standout star was Amedeo Modigliani’s carved limestone Tete from (circa 1911-1912), one of 23 carved heads known that sold for $34.3 million (est. $30 million-$40 million). The seller acquired the work privately from Thomas Gibson Gallery in London in 2010, and the elongated features of the noble head—chiseled with braided hair and an ancient-looking demeanor—brought to mind Cycladic art and the heads of Constantin Brancusi.

A similar Modigliani from around the same time sold at Christie’s Paris for a then-record €43.2 million (around $52.3 million). Yet another limestone head from the series sold at Sotheby’s New York in November 2014 for a then-record $70.7 million. Tonight’s version did not challenge either of those high marks.

Found waiting in line for his jacket after the auction, Odermatt—the dealer who bought the Bonnard—said, “The sale was as good as it could be.”

The auction action resumes on Tuesday evening at Sotheby’s.