Skip to contentSkip to content
Blouin Artinfo
At Phillips, a Modest Contemporary Sale Appeals to the Young
July 2, 2014 by Judd Tully 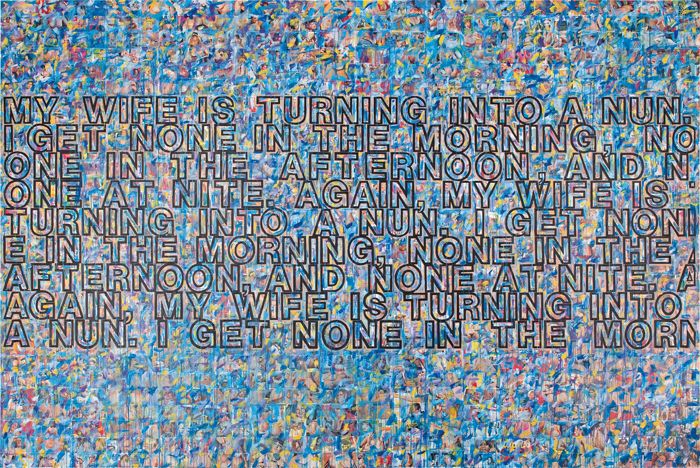 LONDON—Staggering to the finish line of a marathon art season, Phillips’s evening contemporary sale made a modest £9,920,750/$17,015,089 on Wednesday.

The tiny sale, with just 27 lots on offer, landed midway between pre-sale expectations of £7.7-11.1 million/$13.2-19 million, with only four lots failing to sell, for a neat 15 percent buy-in rate. That trailed last June’s larger sale, which tallied £12.3/$18.8 million, with just eight percent unsold by lot. (Estimates do not reflect premiums and all sold prices include the buyer’s premium.)

A single work sold for more than a million pounds and just six hurdled the million-dollar mark, indicating the light weight nature of the entries. A single artist record was set.

“Ours was bigger,” quipped Michael McGinnis, Phillips’s CEO, moments after the sale, “but I liked them all to be honest with you.”

Phillips cannily packed the evening with works by younger, emerging artists who’ve entered the red hot secondary market, including Tauba Auerbach’s “Untitled (Fold)” from 2012, a creased canvas abstraction resembling in part the work of Piero Manzoni. It sold to an unidentified bidder in the room for £386,500/$662,887 (est. £250-350,000).

Auerbach is currently showcased at London’s Institute of Contemporary Art, no doubt a boon to her critical reputation and market strength.

Typically with these younger artists, the houses place come-hither low estimates on the works, confident they’ll end up flying higher.

Though the evening was a kind of miniature day-sale version of what goes on at Christie’s and Sotheby’s, the room was decidedly younger and hipper looking, including a couple seated toward the back of the salesroom with a baby carriage nestled next to their aisle seats.

The beat went on as a relatively small-scaled 46 ½-by-47 ¼-inch Rudolf Stingel text-scratched composition, “Untitled” from 2012, executed in electroformed copper, plated nickel, and gold, drew four telephone bidders, making £842,500/$1,444,973 (est. £400-600,00). The word ‘CONFIDENCE’ was scratched into the surface and coursed down the center of the canvas, perhaps a beacon of the current market.

It was backed by a third-party guarantee, meaning a collector or investor outside of Phillips assured the work would sell no matter what happened in the salesroom.

A market sensation just a few seasons ago when he electrified wannabe collectors pursuing the next big thing, Kassay seems to have dimmed a bit in terms of desirability.

”Everyone is fairly fried,” said Heirston as she left the salesroom, referring to the market players, “and all of my clients are either on their boats or relaxing around their pools.”

Asked about the atmosphere in the salesroom, Heirston said, “I couldn’t get over how young the audience looks.”

“I live in Beirut,” said buyer, Dida Ahmad, as she exited the Howick Place salesroom where Phillips has conducted sales since 2006. “This is the first Hirst in our collection. I got it for not a bad price because people were focusing on other things.”

A larger, 90-by-70 inch version with the same shocking pink face color sold at Skarstedt Gallery’s stand at Art Basel last month for a price understood to be in the $30-million range. Size matters.

Midway through the bidding on the Prince, auctioneer Alexander Gilkes once again caved in to the niggling demands of the room and agreed to split the bid increment in half, an option the auctioneer can either take or refuse.

There was a kind of nostalgic feel to the evening, since it was the last auction to take place in the firm’s gigantic, 19th-century former postal collecting station; future sales will be held in its posh new quarters on Berkeley Square.

“This is the end of an era,” said New Yorker Michael McGinnis after the sale. “Berkeley Square will be our uptown version.”