Skip to contentSkip to content
Artnews
‘A Luxury Problem’: As Art Basel 2018 Rolls On, the Sales Beat Continues
June 14, 2018 by Judd Tully 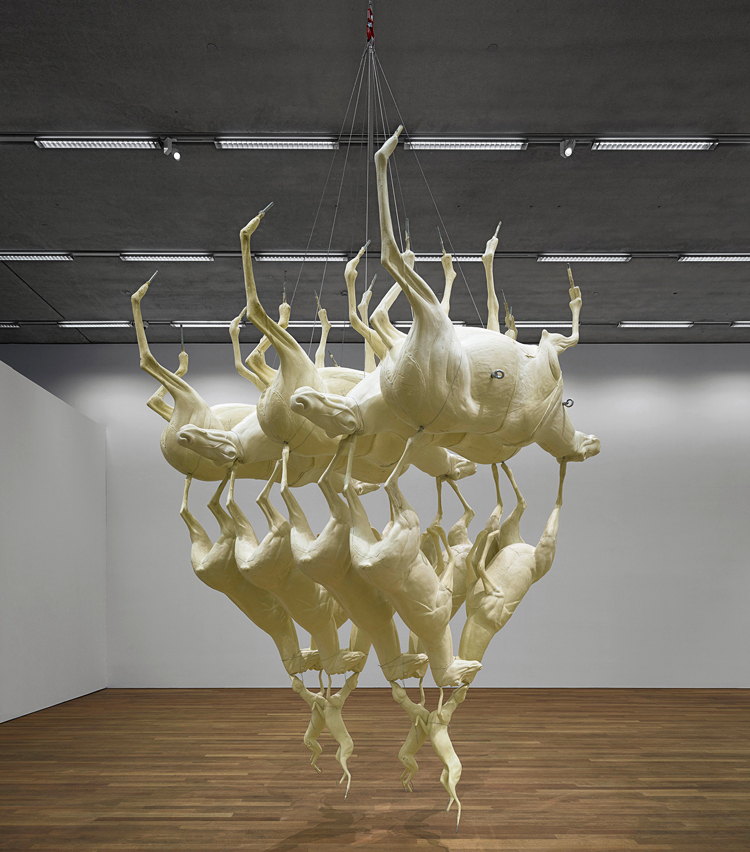 The biggest distraction from the 49th edition of Art Basel is the giant, exhausting, and fantastic Bruce Nauman retrospective “Disappearing Acts” at the Schaulager museum a few tram stops away. And the occasion, slated for a forthcoming stint in New York in October—when it will take up a home at the Museum of Modern Art and MoMA PS1—has a bit of commerce to go along with it.

Sperone Westwater sold Nauman’s new Contrapposto Split, a 3-D video projection that turns the exhibition space into an extension of the artist’s studio, and Leaping Foxes, a new hanging sculpture with foam-formed wild animals stacked acrobatically. The video piece sold to an anonymous buyer for a seven-figure sum, while the sculpture went (also for seven figures) to the Emanuel Hoffmann Foundation. “He was able to create two new pieces in time for the exhibition,” dealer Angela Westwater said of Nauman. “You can call it two world premieres at once.”

Up on the fair’s second floor, home to less established galleries, the mood was mostly chipper as business proceeded at lower price points than the blue-chip offerings below. “We’ve sold a ton of work on the iPad from the artists’ studios in addition to what’s here,” said Lisa Spellman of New York’s 303 Gallery. The shop sold two variations of an Instagram favorite at the fair: Jeppe Hein’s labyrinthine steel and aluminum work Your Way, which went for €250,000 (around $290,600). 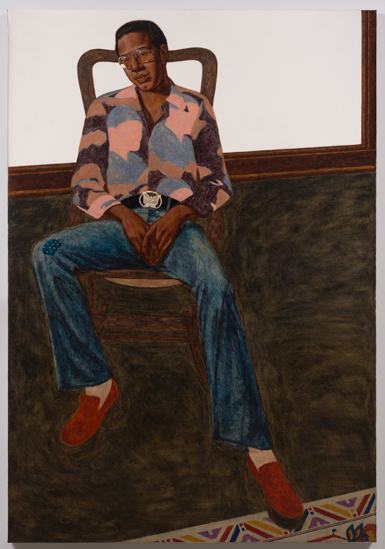 In a similarly shiny fashion, 303 sold Doug Aitken’s large mirror-like wall relief Future (2017) to an American collector for $350,000, as well as four versions of the Berlin-based Polish artist Alicja Kwade’s 2018 sculpture Still Stand (Sterne Rauchend), made in either granite and bronze or stainless steel, for €68,000 ($79,000). Resembling a rectangular table pierced by polished bronze arrows, Kwade’s work can be seen as a shield for warding off attacks. Also at 303 were works by Sam Falls, Sue Williams, Tala Mandali, Kim Gordon, and Mary Heilmann at prices ranging from $45,000 to $150,000. “We’re rehanging this booth every night,” Spellman said. “Half of our sales have gone to Asian clients and the other half to American and European

The mood was similarly upbeat at New York’s Jack Shainman Gallery, which virtually sold out its stand. “There’s so much strong interest in a lot of my artists,” Shainman said of situation he described as “a luxury problem.” Among the works he sold was Lynette Yiadom-Boakye’s powerful painting Invincible (2018), a portrait of a bare-chested man with a writing tablet perched on his lap, which went for $150,000. Another painting by the late Barkley L. Hendricks, Greg (1973)—with a pensively posed subject outfitted in patched jeans with a butterfly-shaped belt buckle that summons the early ’70s—sold for $1.8 million.

“So many people wanted that painting,” said Shainman. “We have a waiting list and work off that. I can’t sell it to someone just walking into the booth.” The gallery also sold Nina Chanel Abney’s canvas Anytime, Any Place (2018), for $60,000, and Kerry James Marshall’s richly romantic and downright masterful 2018 painting Vignette (The Kiss), 2018, for a tight-lipped, no-comment price. “He doesn’t want to hear any more about the auctions and this and that,” Shainman said of Marshall, who he has represented since 1993, long before his market caught like wildfire. “He just wants to work in his studio.”

In the booth for Berlin’s Neugerriemschneider gallery, it was hard to miss Ai Weiwei’s huge cast-iron Iron Tree Trunk (2015), which sold for just over $1 million, as well as Rirkrit Tiravanija’s urgent untitled 2012 (freiheit kann man nicht simulieren), which was said to have been acquired by the German government for around $175,000. The latter, featuring text and hanging sausages made of minced meat and pulped remains of the right-wing German politician Thilo Sarazin’s anti-immigration book Germany Abolishes Itself, ranks as one of the best and most content-rich works at the fair.

At L.A.’s David Kordansky Gallery, Sam Gilliam’s striking bevel-edged 1971 abstraction Repeat sold to an American collector for $850,000. The gallery also sold two major works currently in the first-rate Kunstmuseum Basel exhibition “The Music of Color: Sam Gilliam, 1967–1973,” one to a major European institution and another to a board member from another museum, at prices between $1.4 and $2 million, according to the gallery’s Mike Homer. “The first day was great,” Homer said, “and we did great before we even got here. We have a strong European audience here and haven’t seen a ton of Americans. The fair seems to be becoming more regional but with more Asian collectors.” Referring the recent spate of Gilliam transactions, Homer added, “This isn’t the top of Gilliam’s market—it’s just the next level.” 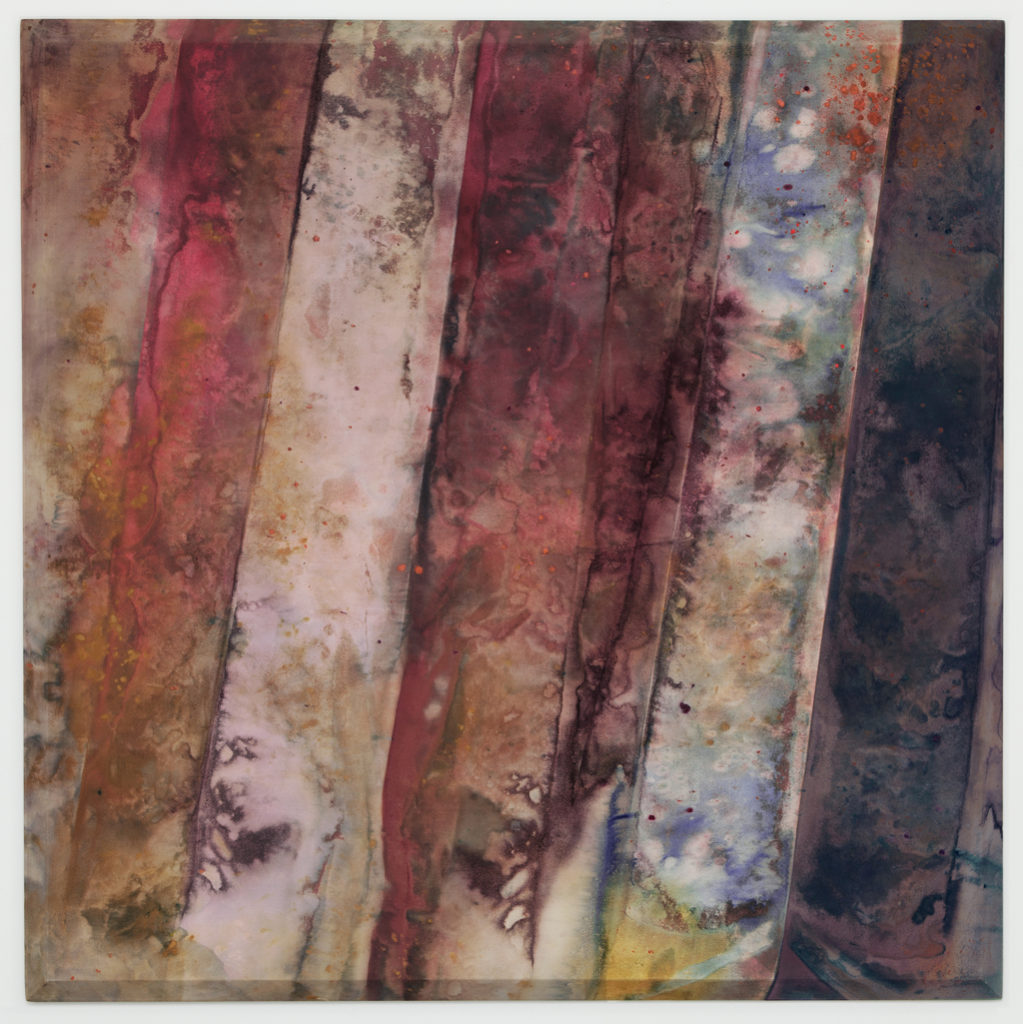 At the booth for the Paris-based Galerie Kamel Mennour, a stunning 2007 Zao Wou-Ki watercolor abstraction fresh from the artist’s estate sold for €560,000 ($650,800). “People are coming in like waves, so you have to always be ready,” said Kamel Mennour. “This is the second hanging, so I’m happy.”

Back on the main floor, action continued at Cheim & Read with Joan Mitchell’s large (some 9 by 5 feet) violently gestured abstraction Red Tree (1976), which sold for around $6 million to a European collector. 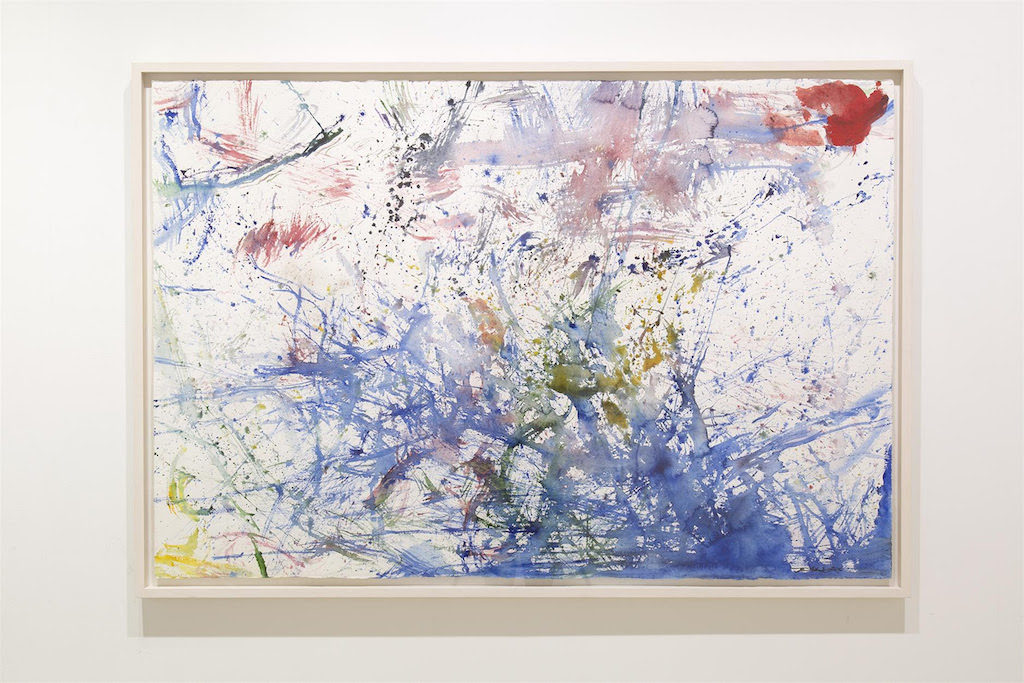 New York’s Marianne Boesky Gallery, making its first appearance on the ground floor after years upstairs, sold a new Frank Stella painting, Red Star (2018), for $550,000, the first painting the artist has made on canvas since the mid-’90s, according to gallery partner Ricky Manne. Also sold from the booth was Donald Moffett’s 2018 Lot 052018 (Cerulean), for $180,000. “We have a wide breadth of prices, from $20,000 to the millions, to show the range of our program,” said Manne, “We have price points that would be high upstairs but aren’t down here.”

At Kukje/Tina Kim Gallery, the Geneva-based collector Gabriel Safdie was ecstatic over his backroom purchase of Alighiero Boetti’s Trail of Thoughts, which was woven by women in Afghanistan in the ’80s, for $150,000. “You can hang it both ways and the single letters become an abstraction,” Safdie said. “You cannot find anything like this at auction. And yes, it’s a crazy price.”

Basel visitors from New York were likely to be struck by the jarring sight of a Keith Haring painting in the booth for Acquavella Galleries, a site rarely associated with art sprouted from fertile downtown streets of yore. Untitled, from 1984, an acrylic painting on canvas measuring around 5 by 5 feet, sold in the region of its $4.5 million asking price. The lively composition features a clunky Commodore-era computer with a radiant image of a hieroglyph perched on the body of a polka-dotted dancing figure. It’s a long way from the East Village to Basel, to be sure.