Skip to contentSkip to content
Blouin Artinfo
20th Century & Contemporary Art Auctions at Christie’s and Phillips
May 9, 2016 by Judd Tully 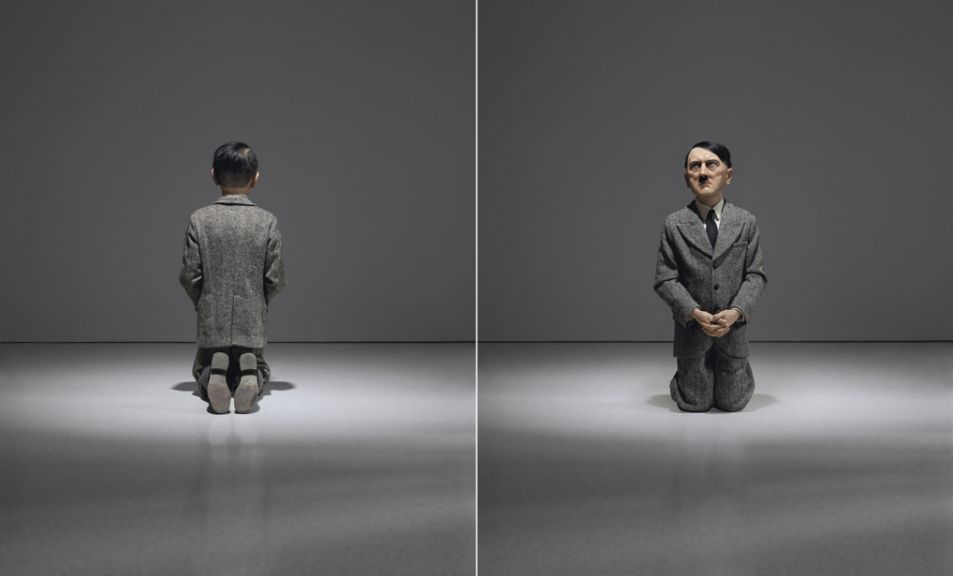 The edgy and deliberately risky Christie’s sale, which kicked off at 5 PM, sold 38 of the 39 lots offered, for an almost perfect 3 percent buy-in rate by lot. Twenty of the lots sold made more than $1 dollars, and of those, two sold for more than $15 million. The final tally almost reached the presale high estimate of $81 million. (Prices reported include the buyer’s premium, which is 25 percent for hammer prices up to and including $100,000, then 20 percent up to and including $2 million, and 12 percent for anything above that. Estimates printed in the catalogue do not include the buyer’s premium.)

The pace picked up a bit with [lot 3] Martin Kippenberger’s whacky crucifixion scene “Feet First,” from 1990. The piece, composed of carved wood, motor-car lacquer and steel nails, is one of a set of five variants of the self-portrait-like relief plus one artist’s proof. It went to another anonymous telephone bidder for $1,325,000 (est. $700-900,000).

Most of the sale material, at least price wise, seemed more appropriate for a day sale during headier times. The tally for this one-off event, the fourth “curated” by Loic Gouzer, Christie’s deputy chairman for Post-War & Contemporary Art, New York, was a puny sliver of that realized by his “Looking Forward to the Past” auction in May 2015, which fetched $705,858,000. Nevertheless, it may have provided the right tonic for this newly tentative market.

The Bound to Fail title refers to a Henry Moore sculpture that artist Bruce Nauman appropriated for one of his most important works, “Henry Moore Bound to Fail,” a cast iron version of which [lot 15], from 1970, sold this afternoon for $6,997,000 (est. $6-8 million). This was one of 10 works backed by third-party guarantees, which assure that buyers are lined up ahead of the auction, so technically it could not fail. A second Nauman [lot 4], “No, No New Museum,” his standout 62-minute video from 1987 featuring the costumed and screaming artist jumping up and down, sold for $1,625,000 (est. $1-1.5 million).

Figurative painting, not exactly in fashion, was robustly represented by Julian Schnabel’s massive ceramic-plate and wall-sconce confection “What Once Denoted Chaos Is Now a Matter of Record” (lot 9], from 1981. Backed by a third-party guarantee, it sold to an anonymous phone bidder for $965,000 (est. 800,000-1.2 million). In a more recent figurative vein, Kerry James Marshall’s powerful composition “Untitled (Pin-up)” [lot 33], from 2014, executed in acrylic on PVC panel in artist’s frame and depicting a nude black woman straddling a monumentally scaled plastic Afro-styling comb, sold to Los Angeles collector Stavros Merjos for $821,000 (est. $650-850,000). Merjos noted, “In this environment, to sell like this is unbelievable.”

The sale also featured the rare-to-auction artist Robert Gober, whose widely exhibited, “Untitled” sculpture [lot 18], from 1993-94, a supersized re-creation of a stick of Breakstone butter executed in beeswax, wood, glassine, and felt-tip marker, went to yet another telephone bidder for $2,285,000 (est. $1.5-2.5 million).

The performance by a lineup of artists more familiar to seasoned insiders than newbie collectors rang a strong and reassuring note that the art market isn’t in free fall. Still, higher prices could have been realized by top-quality works, as evidenced by David Hammons’s elegant and elegiac “Throwing up a Brick” [lot 20], from 1998, which realized $1,445,000 (es.t $1-1.5 million). The 116 3/8-by-46-inch drawing, composed in part of basketball-dribbled marks encased in a Baconesque gold-and-glass frame and hung inches above three found bricks, was museum quality. Indeed, before being pulled out to be part of this auction, it was in the Hammons’ retrospective-style exhibition that opened in March at the Mnuchin Gallery and continues to May 27.

Two iconic sculptures by artists who achieved fame in the 1980’s and ‘90’s sealed the success of the auction. Jeff Koons’s “One Ball Total Equilibrium Tank (Spalding Dr. J Silver Series)” [lot 21], from 1985, famously composed of glass, steel, sodium chloride reagent, distilled water, and, most importantly, the floating basketball, went to a telephone bidder for $15,285,000 (unpublished estimate in the range of $12 million); the work carried a third party guarantee. Although not identified in the catalogue, the owner is understood to have been megacollector Peter Brant. Its illustrious exhibition history includes a show at the Brant Foundation Art Study Center, in Greenwich, Connecticut, in 2009-2010.

But remarkably, or so it seemed this evening, the Koons was overshadowed and outgunned by Maurizio Cattelan’s “Him” [lot 39], from 2001, a kneeling, miniature effigy of Adolph Hitler praying, choir-boy-like, at some imaginary altar, which an anonymous telephone bidder bought for a stunning record $17,189,000 (est. $10-15 million). The undeniably controversial work was provocatively placed in the salesroom directly under the podium of auctioneer Jussi Pylkkanen. Understood to be consigned by former hedge-fund mogul David Ganek, the piece even spooked Cattelan, who wrote, “Hitler is everywhere, haunting the specter of history.” Ubercollector Stefan Edlis, who owns another version of the wax, human hair, suit, polyester resin, and pigment sculpture, said he asked $20 million for his version “when I didn’t want to sell it five years ago.” (It remains in his collection.) Edlis, a Holocaust survivor who heard Hitler’s speeches in 1938 and who attended the auction, added, “It’s one of [Cattelan’s] iconic pieces and doesn’t get any better than that.” New York private dealer Philippe Segalot was the underbidder. “I tried,” said Segalot. “I’m a big fan of the artist, and I was impressed by the price.”

Christie’s “Bound to Fail” results certainly buoyed prospects at Phillips’s smaller sale at 7 PM, which sold 34 of the 37 lots offered for a crisp 8 percent buy-in by lot. The $46.5 million tally looked modestly upbeat compared with the presale expectations of $40.8 million to $60.95 million, although it’s important to remember that the sales results include the buyer’s premiums and the estimates do not. In a real sense, Phillips couldn’t fail, since 20 lots were backed by guarantees, by third parties and outside investors and, for two lots, by the house itself. Still, the final result paled next to the $97.2 million chalked up last May’s in a different market.

“I think we’ll see smaller totals across the board,” Ed Dolman, Phillips chairman and CEO, said in postsale comments, urging the press in attendance to “look at the individual lot prices and the percentages sold.”

And indeed, the results were burnished by the performance of three first-rate Mark Bradford paintings, especially “Mixed Signals” [lot 8], from 2009, a mixed-media collage on canvas apartment-scaled at 48 by 60 inches, which went to a telephone bidder for a rousing $2,965,000 (est. $1-1.5 million). Also demonstrating that quality rules, Jean Dubuffet’s masterful and still edgy “Barbe des rites” [lot 5], from 1959, an indescribable kind of figurative abstraction, sold for $3,077,000 (est. $1.5-2.5 million).

On the other hand, the cover attraction, Brice Marden’s oil-and-beeswax-on-canvas triptych “Star (for Patty Smith)” [lot 17], from 1972-74, achieved only modest success. Although it was the top lot, fetching $5,989,0000 (est. $5-7 million), one would have expected it to go higher, given its great title and muse. Perhaps the piece is just not the kind of Minimalist-inspired work best suited to this particular market.

The Marden was protected by a third-party guarantee as was Jeff Koons’s “Naked” [lot 25], from 1988, featuring two cherublike figures in porcelain, which brought $5,989,000 (est. $5-7 million) from another anonymous telephone bidder.

There wasn’t much action in the salesroom beyond the inevitable ping-pong telephone bidding, although Anselm Kiefer’s giant two-panel “Der Wolken, heitere Stimmung” [lot 13], from 2011, sold to international dealer Jens Faurschou for $797,000 (est. $700,000-1 million). Paris/Salzburg dealer Thaddaeus Ropac was the underbidder. “I think it’s a great Kiefer,” said Faurschou, as he headed to the Park Avenue exit, “and it was a fair price.” Asked if it was for a client or inventory, the dealer said, “It’s for the long term. I really like it.”

In what will be a jam-packed week of market testing, the action resumes tomorrow evening at the Sotheby’s Impressionist and Modern auction.