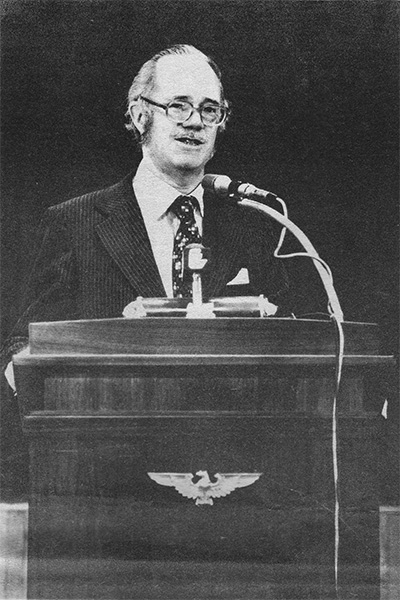 Foundation for the Livingston Biddle, Chairman of the National Endowment for the Arts, at the Community of Artists/CCF-CETA Artists Project, photo George Malave

Livingston L. Biddle, Jr., Chairman of the National Endowment for the Arts spoke first. Biddle began with a salute to Henry Geldzahler, the new Commis-sioner of Cultural Affairs for the City of New York. “My fine, fine friend, H.G., who actually worked for the NEA when it first started and was one of the great pioneers of our early beginnings when we had only $21.2 million and we now have almost $115 million.” Someone in the audience whistled at this figure. Biddle went on to say how delighted he was to be at the podium and how his wife, Katerina, a painter, opened his eyes to the visual arts. Biddle, a novelist and author of the original 1965 NEA legislation, was staff director of the Sub-committee on Education, Arts and Humanities in the U.S. Senate and an aide to Senator Claiborn Pell before his presidential appointment to the $52,000 a year NEA post. For historical trivia, Biddle’s cousin, George, was a founder of the WPA.

The new NEA chief, who replaced Nancy Hanks, issued a general invitation to CETA people to visit him in his office at 2401 “E” Street in Washington and extended a lengthy metaphor con-paring his view of the Potomac River to a general in Napolean’s army who was awarded a vast chateau in France for his service to the state. He credits Matisse with the general’s story: An open-mouthed visitor to the chateau catches the old marshall’s attention and the visitor is offered the chateau-much to his amazement. The only catch and perhaps this is the moral of the story—the visitor is told to wait in the courtyard while the general collects twenty citizens of the town and outfits them with high-powered rifles. On his command, the citizens open fire on the visitor. If he survives, the chateau is all his. At this point in the story, Biddle in-vites the audience to visit his “E” Street “chateau” with the nice view of the Potomac.

The Chairman stressed the theme of a partnership in the arts between the NEA and other Federal programs with local community leadership being of the greatest importance. He credited a private citizens group, the National Council on the Arts, which is the policy-making arm of the NEA, with developing the idea of employment and training (soon to number 30,000 nationwide) in the arts ala CETA. In closing, the Chair-man, who has resided in his “chateau” for some six weeks, pledged that his agency would act as a catalyst to bring the different elements of art and culture together to build better and stronger cul-tural institutions. 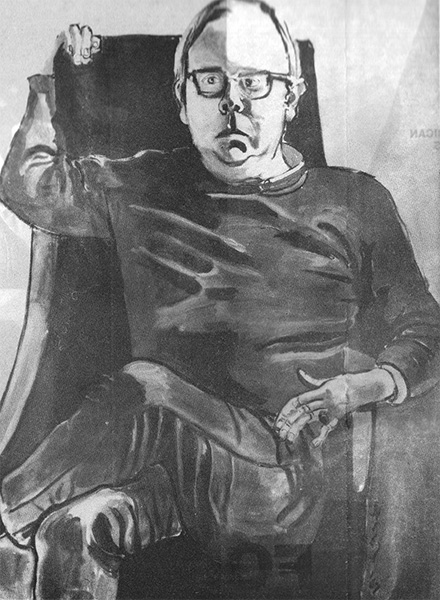 The Commissioner of Culture

With the glare of high powered lights from the Foundation for Independent Video and Film’s color video equipment bouncing off the wire frame glasses and luminous green bow tie of Henry Geldzahler, the new Cultural Affairs Commissioner of New York City quipped upon reaching the podium—”I guess this is what’s called the limelight.” Geldzahler was quick to establish a rapport with the audience on the merits of successive puns, stories and statistics.

Commenting on his switch from head of the Department of 20th Century Art at the Metropolitan Museum to Cultural Commissioner of New York City, Geldzahler compared his bus trip down 5th Avenue from his old office on 82nd Street (The Met) to 64th Street (The Ar-senel Building fronting the Central Park Zoo) as moving from one aspect of culture to another—”from Rembrandt to gorillas.”

“CETA, Mayor Koch and I all have something in common—we all got star-ted this week.” (Geldzahler’s official starting date to his $46,500 job was a week later, January 10.) He was quick to caution Chairman Biddle that he was ready to trade in their friendship for some of the unanswerable questions he was preparing to ask on Federal funding for New York City arts.

The bearded “guardian of art” (as headlined in the New York Times on December 14) described New York City as a magnet and lodestone for artists. One of his first priorities would be to put art back in the public schools (an early victim of the fiscal plague).

Tugging a bit at his beard while glancing at his yellow legal pad, the 42-year-old art expert compared the price of admission to the film Close Encounters of the Third Kind ($4.50) with that of the Museum of Modern Art’s Cezanne Show at $2. Without Federal or private patronage, admission to MOMA would soar to $10-11 a head. “Americans have learned how to appreciate the arts but haven’t learned how to support it,” Geldzahler said.

Zeroing in on the middle class (the audience collectively ducked their heads), Geldzahler suggested they learn patronage by giving up a Caribbean cruise and buying a painting, or passing up that second car and giving $500 to the local ballet company. According to Geldzahler, the middle class, or at least one stereotyped Jewish mother, was inching toward the statement—”My son, the artist” intoned with as much pride as “My son, the doctor.”

Geldzahler pooh-poohed his reputation as a tastemaker in the arts by simply declaring, “It’s a lot of bullshit.” He documented this assessment with his six-year losing effort to get two of his favorite artists (a painter and sculptor whose work he has consistently bought over 8 years) commercial gallery representation. “The gallery system doesn’t work,” he concluded.

Geldzahler, the curator, who is often found on the canvases of David Hockney or captured by the lens of Arnold Newman, apologized to the audience for the fact that so many of his stories came from the visual arts. He did not apologize for his 17 years at the Met and said he would be equally interested in the performing arts as Cultural Affairs Commissioner.

“New York City is the national capital of culture—a national and international resource,” he said. “We set the tone for the nation and the world so it is fair to ask for a bigger slice of the pie. You are being supported for what you do so well, which is make your art—not in isolation or in an ivory tower—but in the community,” he added.

Geldzahler, who succeeds Claude Shostal (Beame’s appointee), described his recent trip to the Soviet Union where he mounted a major show of American figurative art at the Pushkin Museum in Moscow (moving to the Hermitage Museum in Leningrad in the Spring) with examples of how government support of the arts can be bad. In the Soviet system, he explained, no middle class, museum or establishment buys art. The painter who gets the top studio with the best light is the one who paints a portrait of Brezhnev to the premier’s liking. Another artist who doesn’t paint the premier’s portrait gets a subterranean space. “This is where government sup-port of the arts goes bananas,” he opined.

Leaving Russia, Comrade Geldzahler’s travelogue staccato moved to the Ford Foundation on East 42nd Street where he tried to convince the arts direc-tor to endow a group of artists for eight to ten years with a modest amount of capital. (The audience responded to this idea with deafening applause.) Another brain storm, based on the Foundation’s $80 million endowment to 40 major American symphony orchestras, was to do the same with 40 museums. Each museum would get $2 million ($100,000 a year ad infinitum) and the only stipulation would be to use the money to buy living American artists’ work. This would pump money back into the arts and not into the “honchos of 57th Street.” Geldzahler was booted right out of the sleek Ford Foundation office for his radical proposals.

Lecturing to the assembly, Geldzahler emphasized that commercial work was not a dirty word. He supported this opinion by describing Continental Can Co.’s commissions in the 1930’5-40’s to artists such as Stuart Davis and Willem DeKooning who executed paintings that were reproduced in color ad campaigns. His final remark before a tidal wave of applause was that “the survival of the artist in New York City and the survival of New York as a great place to live are intimately connected.” 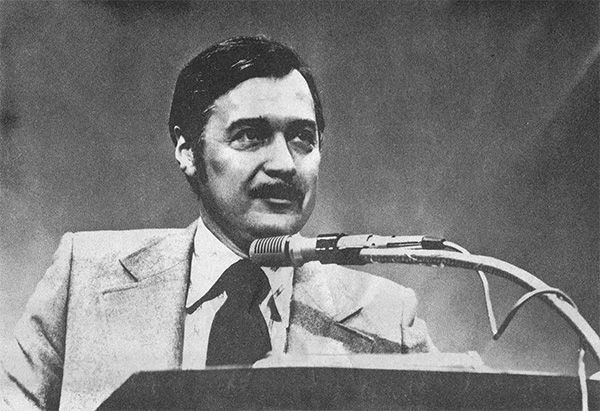 The following morning (Thursday, January 5), Robert A. Mayer, Executive Director of the New York State Council on the Arts (NYSCA), delivered a history of NYSCA to the numbed brains and but-ts of the 300 artists who were entering their third day of CETA shock.

Mayer traced the beginnings of NYSCA from 1960, when the agency was created under the direction of Nelson A. Rockefeller, who was the Governor at that time. As the nation’s first state arts council (which started with a paltry budget of $500,000 and quickly grew in leaps and bounds to $20 million in 1970), NYSCA was used as a model for the creation of her big sister, NEA.

The Director spoke of NYSCA’s growing pains caused by an over-extended staff that was outpaced by rapidly increasing allocations doled out by the state legislature.

NYSCA as a government agency is burdened by two overseers—com-plicated state legislation and a state constitution which prohibits all gover-nment agencies from giving gifts or grants to individuals. Creative Artist Public Services (CAPS) is a non-profit organization employed by NYSCA to loophole the latter proviso. (NYSCA gives a $1 million grant to CAPS which, in turn, gives small grants to individual artists.) NYSCA’s controlling legislation mandates it to classify cultural institutions as first and second class citizens in a bizarre system that gives half the current $27 million arts budget to 92 institutions while the remaining $131/2 million is competitively sought af-ter by more than 1,700 cultural organizations throughout the state. Mayer pointed out the Rochester Philharmonic as one glaring example of a “first class” institution that is sub-sidized to the exhorbitant tune of $10 per concert ticket. He questioned such a use of tax dollars to benefit the arts and said that he would like to see a change in the preferential concept.

Mayer is not overjoyed with this stric-ture or another legislative man-date—one even more politically motivated–that 55 cents per person per county be spent by NYSCA throughout the state (politicians exist in the sticks as well as the cities). NYSCA is pushing for a $121/2 million increase in Governor Cary’s new budget in an attempt to overcome recent budget cuts.

NYSCA’s Executive Director un-derlined the crucial aspect of public ser-vice in the arts and the need to convince the public that art is an everyday part of the public’s life. “We have to build a base of public support for the arts—we have already proven its moral legitimacy,” he said.

After a torrid question and answer period devoted almost entirely to the quirks of the CAPS system of grants to artists, Mayer regained the sympathy of the assembly when he advocated a change in income requirements for CETA artists. An artist who survives by waiting on tables (as opposed to his or her art) shouldn’t be penalized for making a buck in a totally unrelated endeavor.