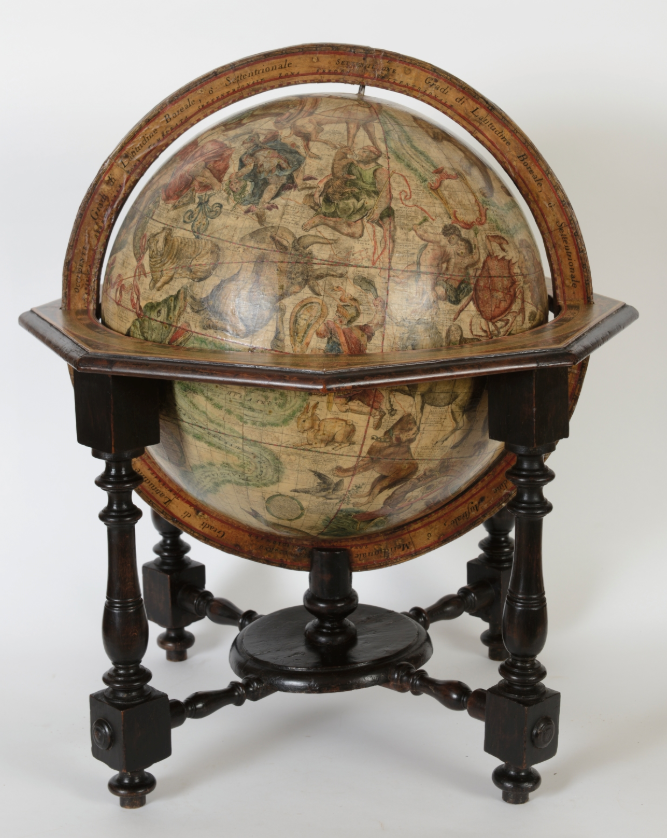 For the collector interested in science, art, geography or history, globes are out of this world.

The only thing that’s missing in George Glazer’s incredibly cluttered Manhattan gallery is a warning sign for visitors to watch their step. Though the tall and rather large-framed antiques dealer has no trouble navigating the minefield of antique floor globes, opened print file cabinets and clusters of other rare planetary treasures, newcomers to his gallery often find themselves immobilized by the sight of so many strange objects.

A hands-on, show-and-tell type of dealer, Glazer lumbers around the gallery, located on the third floor of an Upper East Side townhouse, reaching for globes and telling their stories in giant-sized, paragraph- long sound bites. Like his sophisticated Web site, www.georgeglazer.com, the information flows in many directions.

Terrestrial and celestial globes have been around since ancient Greece, but those spheres only survive in depictions on sculptures. Rare globes from the sixteenth and seventeenth centuries — by such masters as the Franciscan friar Vincenzo Maria Coronelli, who made the enormous “Marly” globes for Louis XIV, and the Belgian physician and mathematician Gemma Frisius — are usually cloistered in museums such as the National Maritime Museum in Greenwich, England, or in a few private collections. They seldom, if ever, appear on the market. There are, however, many English, French, German, American and even Islamic globes by renowned makers, such as the Cary family of London and James Wilson of New York and Vermont (America’s first globe maker), that come up for sale or auction.

A lawyer by training, Glazer opened his gallery in 1993 after on-the-job training as a fledgling English furniture expert at the Tony Arader Galleries on Manhattan’s Madison Avenue. When globes came into the gallery, Glazer would handle them, since he had a decorative arts background and could identify the various period stands that the delicate globes were cradled in.

Considered scientific instruments by some, and sold at auction at Christie’s and Sotheby’s under that appellation, the larger English-made versions of free-standing terrestrial and celestial globes are also considered English furniture, and sold alongside Chippendale side tables and claw-footed chairs. That’s due in part to the elaborately carved wood stands that support the printed and often hand-colored “gores,” engraved maps that are applied to the papier-mâché spheres.

Floor globes have always been pricey objects, and in past centuries, they inhabited English country manors or the wood-paneled libraries of London townhouses. English globes in floor and table models dating between 1780 and 1840 represent the most traditional aspect of the market. “It’s really the English makers that people are after,” says Catherine Southon, Sotheby’s London specialist in scientific instruments. She estimates that her auction house sells no more than 20 globes each year, but not for lack of demand. “I can’t get enough of them. The bigger and earlier the globes, the more money they make.”

Glazer cut his collecting teeth on English furniture, and English globes in particular. (He even rolled a Regency-style, nineteenth-century Bardin floor globe on casters across Grand Central Station’s cavernous main room, after acquiring it in a Westchester antiques store and lugging his valuable trophy home on the Metro North Railroad.) Despite this background, Glazer skirted the more established English globe market and developed a special fascination and expertise in the less explored territory of nineteenth-century American globes.

His education was helped tremendously in 1991, when Arader acquired a large group of globes and related reference materials at a Sotheby’s auction of the collection of aficionado Howard Welsh, and turned them over to Glazer to catalogue and market. One of his first customers was actress Mary Tyler Moore, who bought a pair of early Wilson nine-inch-high globes in 1992. “Welsh collected an unusual number of American globes,” says Glazer, “and when I realized that there was a whole field of American globes that nobody had really looked at, I decided to specialize in this field.”

Glazer has no qualms about broadcasting his admittedly arcane expertise. “I would say immodestly, I’m the leading globe dealer in the country, certainly in American nineteenth-century globes, and probably globes in general.” He reaches for a 12-inch terrestrial table globe with a weighty Victorian-era cast-iron stand, made by New York-based globe maker Herman Schedler, circa 1889. It is priced at $3,600 and is one of about 300 globes in Glazer’s eclectic inventory, ranging in price from $250 to $50,000.

“It’s still not a defined area of collecting, per se, the way some things are, like duck decoys, with a legion of collectors,” says Glazer, barely masking a smirk at the thought of the comparison. “Certainly, people collect maps, and oftentimes a map collector will dabble in globes, but the number of people who’ve decided ¿I’m going to collect globes’ is very small. I’m working with a few people who are building collections, but it’s more or less because I [originally] twisted their arm.”

As Glazer points out, “What makes globes most interesting is also the thing that possibly keeps dealers or other people from focusing on them, which is, they combine different disciplines. They’re scientific instruments — maps and cartography — as well as decorative arts, so none of the dealers in any of those fields, or even possibly the scholars, feel entirely comfortable with these aspects. Usually, somebody’s interested in one or the other. They’re neither fish nor fowl.”

At that moment, the gallery doorbell buzzes and Glazer instantly changes gears, bustling over to take care of a potential client who is looking for a special gift for her husband, who recently returned from a trip to the North Pole. After 30 minutes or so of Glazer’s rapid-fire observations about Admiral Richard Byrd’s polar explorations in the 1920s and ’30s, and hunting down a half-dozen examples of period globes bearing details about those daring exploits, the overly sated client departs with a six-inch Geographic Educator puzzle globe, and the dealer instantly returns to his subject.

“Nobody’s going to live with just a bunch of globes. If you begin to establish a point of view of things that interest you, to me, those are the better collectors, and that should be a goal for a collector. Otherwise, the collection is very static. In a sense, there’s no imagination, even if it’s filled with good objects.”

Heartily digging into his delayed lunch of Chinese takeout, Glazer fine-tunes an earlier observation. “One of the things I try to do here, that I’m not sure all antique dealers do, is try to tie the thing into a historical context. Globes are really more interesting than maps,” he insists, “and I can make a case that globes are the most interesting thing that one could collect. They have everything, really, and relate to so many different things.”

He rapidly ticks off a laundry list of possible interests: “There’s travel, history, science, geography, or something about your ancestors or politics that you can learn from a globe. They can be used to demonstrate principles of astronomy. So it’s surprising they haven’t been collected more.”

Globes pop up in a confounding variety of auction venues, from country house sales to maritime painting auctions, from Los Angeles to London to Monaco. Last October, a pair of early nineteenth-century 21-inch English library globes, by renowned London makers John and William Cary, sold for $138,000 (est. $120,000-$125,000) at a Christie’s Los Angeles sale of scientific and engineering works of art. In May, a pair of 12-inch globes, dated 1792 and made by German globe maker Johann Georg Klinger, fetched $30,740 (est. $8,700-$11,600) at a sale of scientific instruments at Sotheby’s London. The record price at auction was set at Christie’s London in October 1991, when a magnificent pair of elaborately engraved gilt-metal globes, made for Sultan Murad III circa 1579 and attributed to the workshop of Flemish cartographer Gerardus Mercator, fetched $1.82 million.

Globes occasionally sneak into single-owner celebrity auctions, such as the pair of 15-inch-high German globes on stands of walnut and ebonized wood that made $10,200 (est. $5,000-$7,000) at the glitzy Gianni Versace sale at Sotheby’s New York in April. But they paled in price to a stunning pair of eighteenth-century French globes by Didier Robert de Vaugondy that sold for $280,598 (est. $139,082-$208,623) at the gilded Karl Lagerfeld sale at Christie’s Monaco in April 2000. (Globes were often sold in pairs of one celestial and one terrestrial, particularly in the early centuries of globe making.)

Contemporary celebrities aren’t the only famous globe aficionados. The late Duke of Windsor had a passion for globes. A three-inch-diameter celestial pocket globe by J. & W. Cary, circa 1800 and fitted in a spherical case covered in shagreen (fish skin), sold for $12,650 (est. $1,000-$1,500) at the giant Duke & Duchess of Windsor sale held at Sotheby’s New York in September 1997. Another pocket celestial globe of the Duke’s from the same period depicted Australia as “New Holland” and North Africa as “Barbary,” underscoring Glazer’s remarks about the lure of history and geography.

The search for globes can take you to dealers and traditional auctions, but there are other possible sources as well. Surfing on eBay for globes is a hit-or-miss prospect, because the search engine, unless you fine-tune your query, will more than likely deliver an errant listing about an Art Deco-styled lighting globe than a terrestrial object. “There’re some good nineteenth-century American globes that turn up on eBay simply because they’re the kind of things that are just sitting around in people’s attics. And [eBay’s] also good for reference materials and old trade catalogues,” says Glazer, warming up for a warning. “[But] you wouldn’t really know whether something was rare or not or be able to properly evaluate the damage. Condition is a sticky issue. You really can make a mistake. There’s no question about it.”

Polishing off his late lunch with a famished gusto similar to his hunger for globes, Glazer summed up: “There is no one great collection of American globes; but those globes that have passed through my hands would easily constitute the greatest collection of American globes, that’s for sure. But I just don’t have the luxury of keeping them, either for money or for space. That’s the life of a dealer.”