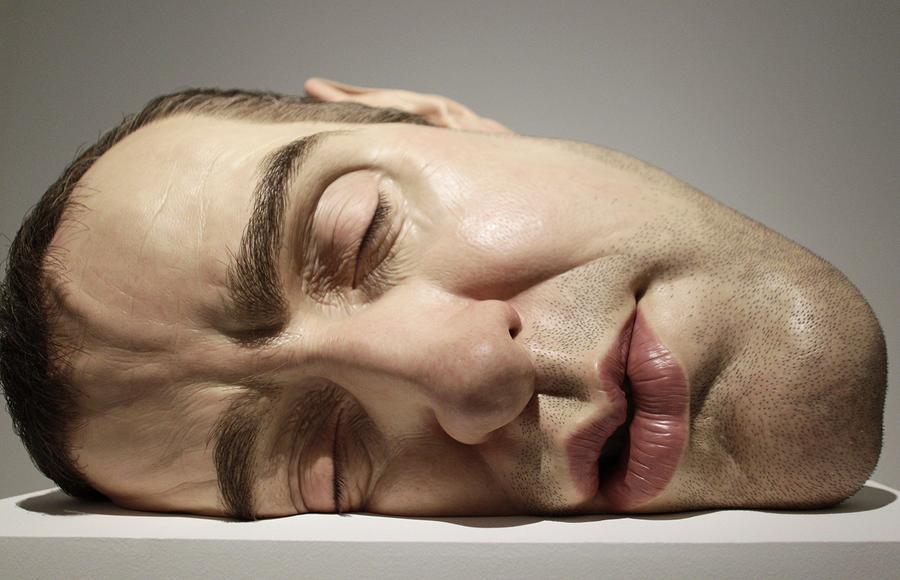 A disembodied and giant male face studded in grubby stubble, a spooning pair of tense lovers, a nude baby boy hanging crucifixion-style on a wall. These are just some of the unusual creations you’ll come across in the hyper-sculptural world of Ron Mueck. In barely a decade of art making, the Australian-born puppet maker and self-taught artist has become an international art star. He’s been feted by a string of major museum exhibitions that have drawn record-breaking crowds and he’s been avidly sought after by some of the world’s top contemporary art collectors for a chance to own one of his startlingly realistic fiberglass sculptures. At age 49, Mueck ranks high in the pantheon of contemporary sculptors.

“He’s able to imbue these objects with something that people recognize as life [but] that goes beyond the look of things, something psychological, something emotional,” says Charles Desmarais, deputy director for art at the Brooklyn Museum and the organizer of the recent Mueck exhibition that drew over 250,000 viewers. That assessment fits in with what the reclusive artist once confided to a curator: “Although I spend a lot of time on the surface, it’s the life inside I want to capture.”

Before his great leap to art stardom, Mueck carved out a distinctive though decidedly low-profile career as a puppet and model maker in television and film, most notably collaborating with the late Jim Henson on two feature films, Dreamchild and Labyrinth.

Mueck catapulted into the public eye in 1996 when his mother-in-law, the celebrated figurative British painter Paula Rego, asked him to make a model of Pinocchio for one of her Disney-themed paintings slated for an exhibition at London’s Hayward Gallery. The 33-inch-high boy, sculpted out of fiberglass, adorned with untold layers of pigment and human hair, and innocently outfitted in snow-white BVDs, is considered one of Mueck’s first mature sculptures. It was exhibited alongside Rego’s quirky, expressionist paintings.

Mueck’s Pinocchio caught the eye of Charles Saatchi, the former advertising titan who had gone on to become a mega-collector and art movement maker. Saatchi instantly commissioned Mueck to create more sculptures and invited the virtually unknown artist to participate in the landmark “Sensation” show. Formally titled “Sensation: Young British Artists from the Saatchi Collection,” the exhibit featured Mueck and some 40 other red-hot YBAs (as they became known as). The show opened with a huge media bang in London at the Royal Academy of Art in 1997.

One of Mueck’s arresting contributions, Dead Dad, a pint-sized silicone and acrylic full-frontal nude of his recently deceased father, caused its own sensation. Splayed out flat on his back, the riveting 40 1/8-inch-long figure, from his stubbly 5’o’clock shadow to his sallow skin, flaccid private parts and just dead-looking demeanor, entranced museumgoers. The diminution of scale and startling perspective, coupled with extraordinary anatomical details, created a kind of morbid tour de force, more akin to Michelangelo and Auguste Rodin than anything cutting-edge or contemporary.

As it turns out, the sculpture, in all of its necromantic magnificence, was created as a humble homage to the elder Mueck, who had recently died in Australia and was buried before the artist could arrange passage from his home in London.

The work stood out in that super-hyped talent pool and was every bit as controversial as the epically scaled, pickled and glass-encased tiger shark of YBA prince Damien Hirst.

Mueck’s ongoing dialogue with the old masters got a big jolt in 2000 when he was granted exclusive after-hours access to London’s National Gallery of Art for two years, a privilege accorded to just a handful of contemporary artists, including David Hockney and Lucian Freud. Four sculptures inspired from that experience were exhibited at the gallery at the end of his tenure there, including the 2001 work Mother and Child, a startling realistic rendering of a mother with her newborn.

Unlike most of Mueck’s mediagenic contemporaries, getting any kind of sound bite from the artist about his work and life is virtually impossible since Mueck doesn’t and hasn’t granted interviews. He remains unwaveringly media phobic. “I remember he said like four words the whole time I was in his studio back in 1998, and I don’t think he’s changed much since then,” recalls Michael Auping, the chief curator at the Modern Art Museum of Fort Worth, where Mueck’s mid-career survey of 13 works is on view through October 21.

It was during that early studio visit that Auping set the stage for acquiring Seated Woman, an extraordinarily crafted, mixed-media sculpture of an old, hunched-over figure, primly seated in her cardigan and wool skirt, hands clasped on her knees, as if she were praying for a way out of her melancholic torpor. Though deliberately titled to avoid any personal connection to the artist, the work, which the museum bought in 2002 for $70,000, bears a striking likeness to Mueck’s grandmother-in law. In fact, many of his creations are loosely modeled on friends and family.

“He thinks a lot about people,” says Auping, “and for that reason I see Mueck almost as an outsider artist rather than a member of an avant-garde.” London dealer Anthony d’Offay, who has exclusively represented Mueck since the “Sensation” show, agrees: “He’s not from the art world, he’s from a different world, and wasn’t toughened up or bent out of shape by the international art world. So in a sense he remains fairly innocent.”

In a way, Mueck’s contemplative silence is a perfect foil for his psychologically charged sculptures that seem to spin tales of their own in the viewer’s imagination without uttering a single word.

It is also one thing to view Mueck’s extended family of remarkable creatures in a controlled museum environment, and quite another to experience them inside a collector’s home.

“We have Dead Dad well protected,” chuckles Stefan Edlis, a major contemporary art collector from Chicago. “He’s under our Giacometti glass-topped coffee table because we didn’t want to have a dead person in the middle of the living room. So we sit on the sofa and have our drinks looking down at Dead Dad.”

Edlis acquired the sculpture from Charles Saatchi about two years ago for an undisclosed price, as well as Big Baby III, another early Mueck work from 1997.

Owning a Mueck is not easy, given both the fragility of the sculptures and the sometimes disturbing subject matter. One noted American collector, for instance, was extremely proud of Mother and Child, the artist’s graphically shocking portrayal of a 35-inch-long nude woman who has just given birth, with the bodily fluid—smeared baby resting comfortably on her stomach, umbilical cord still attached. Flat on her back with knees raised, virtually nothing is left to the viewer’s imagination. The sculpture resided proudly in the collector’s bachelor digs until his wife-to-be insisted it had to go. “I don’t think she even let him keep it in his office,” says a source. The collector loaned the sculpture to the National Gallery of Canada in Ottawa, where it regularly drew gaping crowds.

Kent Logan, a Vail, Colorado, mega-collector and museum patron, had a different problem with the 1998 Man Under Cardigan, which featured an otherwise nude figure seemingly seeking shelter under the canopy of his outstretched sweater. “Our maid was afraid to go into the room,” recalls Logan, “because she thought the piece was possessed.”

There isn’t anything prurient or macabre about Mueck’s subject matter, though many of his hyper-real creations are nude, babies and overweight bald men. In fact, there’s almost a religious purity about them, infusing the sculptures with vibrations of the Northern Renaissance or anonymous old masters. Classic themes, such as birth and death, love and loneliness, are evocatively explored. You can’t detect an ounce of irony in any of the works.

“They’re fantastic to live with and are so lifelike, it’s almost like having friends in your place. I don’t find them creepy at all,” says another anonymous Mueck collector, who owns the 2005 sculpture Two Women, a pair of 33-inch-high fabulously wrinkled old women outfitted in wool overcoats and sensible shoes.

The prospects of a private collector owning a Mueck are relatively slim since the artist has made just over 30 sculptures since 1996, turning out anywhere from two to four works a year. Anytime one of his coveted pieces appears on the open market, it’s something of an event. One such sale occurred at cutting-edge auction house Phillips de Pury & Company in Manhattan in May 2005, when Mueck’s Pinocchio from 1996, the one first shown at the Hayward Gallery with his mother-in-law’s paintings, fetched a record $531,200. Saatchi was the seller, making yet another killing on his prescient investment.

Other sculptures by Mueck have recently sold privately in the million-dollar range, but the majority of his works are squirreled away in top museum and foundation collections, such as the twice life-size Untitled (Big Man) from 2000 at the Hirshhorn Museum and Sculpture Garden in Washington, D.C., and the 16-foot-long newborn, A Girl, from 2006 at the Scottish National Gallery of Modern Art. (A Japanese museum had commissioned A Girl, but once officials there saw the graphic details of the blood-caked baby and partially cut umbilical cord, the museum passed on it and asked for a different work.)

“It makes Ron feel more secure and happy to have the work in museums,” says his dealer, d’Offay, “and he’s not somebody who’s driven by the excitement of money or power or any of those things.”

Critics have had a field day dissecting his work, especially his Lilliputian-like shifts in scale, comparing Mueck’s creations to 1950s-style science fiction “B” movies such as The Amazing Shrinking Man and The Attack of the Forty-Foot Woman. Others have made reverential comparisons of his sculpture to Northern Renaissance altar pieces and late Roman portrait busts. Yet another dismissed the whole endeavor as “side show” freaks of nature.

Whatever the reaction, Mueck remains a box-office sensation with his conceptual manipulations of scale and magical renderings of the human form. Bowled over by his old-world skill and craftsmanship, both the cognoscenti as well as less sophisticated folks continue to be amazed at Mueck’s family of man.

Judd Tully is the editor-at-large of Art & Auction magazine and writes frequently about the international art market and contemporary art trends for a number of publications.