From ancient Egypt to the present, collectors have gathered their own miniature armies 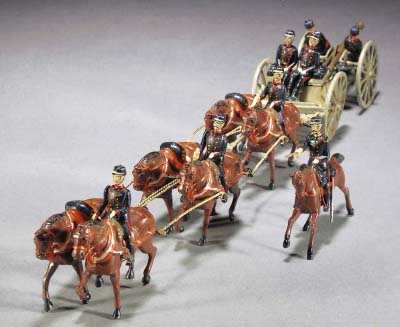 Though H. G. Wells, Douglas Fairbanks Jr. and Malcolm Forbes were probably the most famous toy soldier collectors of their eras, you don’t have to be a great novelist, swashbuckling movie star or globe-trotting publisher to enjoy this millennia-old hobby.

Toy soldiers and vestiges of miniature warriors have been excavated from Roman ruins and the tombs of Egyptian pharaohs. However, those ancient treasures in terra cotta and lead usually have to be viewed from a distance, behind glass partitions at places like the British Museum in London or the Metropolitan Museum of Art in New York. Occasionally, rare samples might pop up at auction alongside other pricey antiquities.

The current market for toy soldiers and other figures dates primarily back to the early nineteenth century and the advent of the Industrial Revolution. The first auction for old toy soldiers took place in London in 1968 at Knight, Frank & Rutley, organized by toy soldier champion Richard Lane. Lane subsequently joined Phillips Auctioneers, which dominated the auction market until Christie’s South Kensington in London blitzkrieged into the field in 1994. During Phillips’s distinguished reign, such storied collections as the 3,000-piece horde of Douglas Fairbanks Jr. sold in 1977 for a then-impressive $16,000, and collector John Hanington’s encyclopedic trove of some 24,000 toy soldiers went for a record-shattering $300,000 in 1984, with a good chunk of the collection going to Malcolm Forbes.

Modern toy soldiers began with manufacturers in France, Germany and England that independently developed the colorful art of toy soldier making. They gradually built the now-hallowed brand names of Mignot, Heyde and Britains, as familiar to toy soldier collectors as Bugattis, Porsches and Austin-Healeys are to vintage car enthusiasts.

“Toy soldiers have been around forever,” says Daniel Agnew, the toy soldier specialist for Christie’s South Kensington. The 30-year-old Agnew has been involved in the hobby since boyhood, first collecting old lead toy farm animals “to keep me quiet” and gradually developing a keen interest in all aspects of toys. Agnew joined Christie’s South Kensington as a salesroom assistant in 1989 and gradually broke into the specialist ranks.

In a matter of minutes, Agnew affably races through an abbreviated history of the hobby, pausing longest to distinguish between three major types of figures. There are the two-dimensional metal figures set on little stands and known as “flats,” primarily made by German firms starting in 1730, the solid-cast metal, three-dimensional soldiers pioneered in France around the time of the French Revolution, and the hollow-cast, three-dimensional figures invented by Britains in the late 1890s.

The British-made casting process was a revolutionary advance, producing three to four soldiers for the price of a single solid-cast figure. It made the toy figures much more affordable for children, giving the company huge commercial success both domestically and overseas until 1966, when Britains ceased manufacturing lead toy soldiers. (The firm subsequently produced plastic figures, but by the 1980s, it had resumed production of the metal soldiers.) “Most people, when you mention toy soldiers, think of Britains,” Agnew adds.

Prices can vary greatly in this fussy field, as evidenced by a Britains Marching Scots Guardsman that fetched a record (for a single toy soldier) $4,620* (est. $450-­$900) at the landmark Britains’ Archive sale at Christie’s South Kensington in June 1994. It was a cache snared by Agnew’s predecessor and mentor, the renowned toy soldier expert Norman Joplin.

More staggering marks were set at Christie’s New York’s December 1997 record-breaking $739,608 sale of the Forbes Museum of Military Miniatures at the Palais Mendoub in Tangier, Morocco (following the death in 1990 of mega-collector Forbes). A Britains American Civil War group of 168 figures marched to $10,350 (est. $400­$600) and a Mignot Tripolitania Conflict, 1911 display set brought $12,650 (est. $4,000­$6,000). (Aficionados shouldn’t despair: despite the sale, the Forbes Magazine Galleries in New York City still house some 10,000 toy soldiers in a splendidly installed series of dioramas and staged vignettes.)

But prices don’t always jump into four figures, as seen last June at Phillips’ salesroom in Knowle, England. A Britains Set No. 13 of the King’s 3rd Hussars, consisting of four troopers carrying carbines and an officer on a rearing horse, made $330 (est. $225­$375), and a Britains Set No. 145 of Royal Army Medical Corps and Red Cross ambulance wagon sold for $381 (est. $225­$375). (“Sets” refer to a related group of toy soldiers or figures that are boxed together.)

Both lots had various condition problems that were explicitly enumerated in the catalogue descriptions; each item was assigned a condition grade. Apart from the usual wear and tear facing any used toy, lead soldiers are especially subject to what’s known in the field as lead rot, in which oxidation eats away at the metal, triggering an unsightly white powdery finish.

As in many collectible areas, condition rules the game and has a huge effect on pricing. Bidders, cautions Agnew, should always consult the glossary and ratings system in the catalogues as well as condition reports on specific lots.

There’s a lot more action in store on December 1 in London, where Christie’s South Kensington will offer the all-Britains collection of Arnold J. Rolak, a Houston-based insurance executive. Rolak caught the toy soldier bug by chance in Bermuda in the early 1980s while attending a charity auction. Col. Donald R. Pudney, head of the Bermuda Regiment and a renowned toy soldier collector, was called in by the event organizers to discuss with Rolak one of the lots, a Britains Coronation Set Coach, commemorating the 1953 coronation of Queen Elizabeth II. With that, Rolak says, “I was hooked.”

Estimates on prices for pieces in his collection, including the iconic Bermuda lot, range from $150 to $15,000. “I’ve had more fun than the world will ever know in collecting this stuff,” says the 67-year old Rolak.

The Rolak army of toys begins with a rare circa 1880s Britains tin-plate mechanical toy of two men racing around a tent (est. $10,500­$15,000), one of approximately 20 items offered in a Britains retail catalogue from the 1880s. Rolak has hunted down all but five of the catalogue’s items, including a marvelous General on a Hobby Horse (est. $3,750­$5,250) that Agnew says is perhaps one of Britains’ “first soldiers.”

Prime examples of correspondingly rare prototypes from the 1980s, after Britains resumed production of the metal figures, are also being offered (estimates range from $375 to $525). “There are lots of oddities and unusual things,” notes Agnew. There are cowboys and other civilians in Rolak’s extensive mix, a rather charming quirk of both the collector’s taste and the field’s extraordinary reach, encompassing everything from Arctic explorations to more placid railway station scenes.

One of the highlights of the Rolak collection is the only known boxed set of The Texas Rangers, which is housed in its original cardboard box (est. $3,000­$4,500). What’s unique about the lot is a convergence of fascinating factors. It was specially produced as a promotion for the 1936 Paramount film The Texas Rangers, directed by Hollywood great King Vidor and starring Fred MacMurray, a kind of marketing marriage between Hollywood and the hobby.

“Arnold was trying to get that set for many years,” says Agnew. “He kept offering the owner a certain amount of money for it and eventually got it.” As Agnew explains, a boxed set, if in good condition, might add 30 percent in value to the item. “If it’s a very rare box, it can be worth a lot more than the actual toys itself. So for The Texas Rangers, the five cowboys on horses, if offered individually, would barely command $15 a figure,” notes Agnew. “So you’re going to be spending £2,000 [about $3,000] for a cardboard box. That’s how collecting goes.”

Another civilian rarity, Britains’ Edwardian Family, dates from 1907 and features a nattily attired mother and father sitting at home in comfortable armchairs with their three children (est. $12,000­$15,000). The father smokes a pipe and the mother is busy with the baby on her lap. Agnew believes that it’s the only complete set in existence.

Authenticity concerns in the toy soldier and figures market are a deadly serious business, one that has grown even more so with the advent of Internet auction sales on hugely popular sites such as eBay. More and more greenhorns are getting in on the act, people who probably haven’t consulted such crucial reference books as James Opie’s Collecting Toy Soldiers or combed through the back issues of Toy Soldier Review or a Web site like Toy Soldier Resources (www.wmhocker.com/resource.html).

On a recent surfing mission on eBay, there were listings for more than 350 toy soldier lots, a veritable potpourri of examples from Heyde, Mignot and Britains, as well as another 700 listings for Britains figures alone. But as Agnew points out, “Unfortunately, you have to be careful, because there are fakes around, especially with hollow-cast lead figures that are hand-painted. It’s relatively easy to strip them down and start again. They’re also very easy to copy.”

Like a number of cautious experts in other collectible areas, Agnew is extremely wary of judging toy soldiers from photographs alone. “People need to handle toy soldiers and closely examine them,” he says, including using an ultraviolet light to see if the paint has been tampered with, “and compare them with other figures. It’s a good way to get a feel for the subject.”

That’s also where the fun begins.