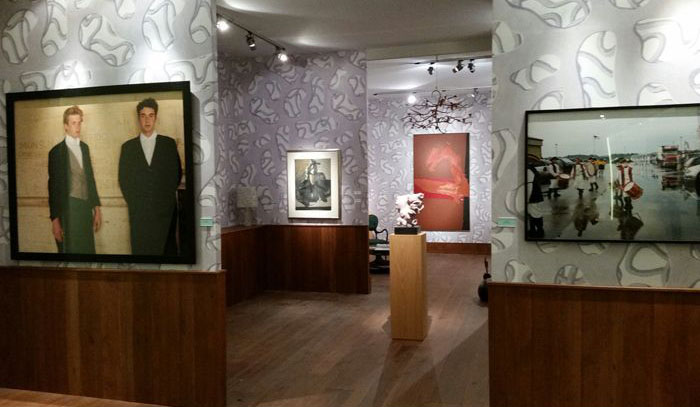 MAASTRICHT, the Netherlands — With the background beat of The TEFAF Art Market Report 2015 announcing record global art sales of €51 billion, Europe’s fanciest art fair opened Thursday with great expectations. Unlike most contemporary themed art fairs that rely on make or break sales in the first few hours of the V.I.P. opening, TEFAF (aka The European Fine Art Fair) is a slow-brewing, 10-day-long event embracing categories from antiquities and jewelry to Old Master paintings and where “art sells at a snail’s pace,” said New York dealer Paul Kasmin, “and usually at the end of the fair or even a week after.”

Kasmin, in his second year at TEFAF, let loose designer/artist Mattia Bonetti to design the stand with bespoke wallpaper, chairs, and tables, all of it for sale. Kasmin’s juicy mix of Post-War American and French abstract paintings, African tribal art, Tina Barney photographs, and two Chaim Soutine paintings reflected the cross-category depth of work at TEFAF. Prices ranged from $65,000 for Barney’s large-scale “Europeans,” featuring two Etonians, to $2.5 million for Robert Motherwell’s “Summertime in Italy” from 1967, an early example of the artist’s important “Open Series” and featured in the Whitney Annual of 1967 (before the event morphed into the Biennial).

“We had six different vetting committee members visiting our stand,” said the dealer, indicating it might be a record for any exhibitor, referring to TEFAF’s rigorous vetting process that allows specialist examiners to nix any work with the slightest whiff of questionable authenticity.

The quality and high caliber atmosphere of what one takes in here was evident at practically every turn, including London dealer Richard Nagy with Rene Magritte’s stunning portrait/homage, “Renee Cordier” from circa 1936, and resembling a kind of Surrealist stage set. It is priced at $3.3 million and was originally a gift to Cordier. Initially asked if the price was quoted in US dollars or euros, Nagy pointed out the narrowing gap between the two currencies, barely five percent apart and said, “Any American will think parity and ignore it.”

Another striking portrait, this one at Munich’s Galerie Thomas, was Ernst Ludwig Kirchner’s “Portrait of Leon Schames,” from 1922-24, capturing the goateed art dealer standing in a double-breasted suit against a color-charged background of figure paintings. The 58 ¼ by 35 ½ inch painting is priced at €3.8 million.

At the dual stand of Paris dealers Galerie Hopkins and Galerie Gradiva, dealer Thomas Bompard sold seven works, including one of Auguste Rodin’s last bronze sculptures, the sensual and beautifully patinated “Fugit Amor,” depicting a pair of intertwined figures and cast in 1917. It sold in the region of the €1.5 million asking price.

The dealer also sold a rare to market Gustave Moreau painting, “Salome in the Garden” from 1878 and last publicly viewed in 1906.

Bompard declined to cite a price, though said it was the last Salome in private hands and certainly sold in what would be an auction record, which stands at around $2.1 million.

“This is the luck of the beginner,” said the first time TEFAF exhibitor.

Price points carry a big bounce here as evidenced by London’s Dickinson and its star offering, Vincent van Gogh’s June 1888 landscape in watercolor, “Moulin d’ Alphonse Daudet a Font Vielle,” priced in the region of $10 million. As with any art fair, the recognition factor of art works previously sold at auction is a fun game to play. Also at Dickinson, for example, Kees van Dongen’s alluring nude, “Lailla” from 1908 and standing 51 inches high by 38 7/8 inches, was on offer for £4.8 million. It last sold at Sotheby’s London in June 2012, when it fetched £3,681,250/$5,790,860, including premium.

On that same re-offer front, but with a different twist, Paris, Milan and Florence dealers Tornabuoni Art had a fantastic, wall-length Alighiero Boetti, “Anno 1984,” exquisitely executed in pencil on paper and mounted on canvas from 1984 in 12 sections. The artist drew and replicated magazine covers for every month of that year, ranging from Domus to Scientific American. It was priced at €3 million. The huge work was offered at Bonhams London in October 2010, when it brought in (failed to sell) against a £1.2-1.8 million estimate and again at Sotheby’s London in October 2013 with the same result against a £600-800,000 estimate. Perhaps it will have better luck this time around with more wall room to breathe.

“We’re spread very thin,” said London dealer Andrew Renton of Marlborough, “they’re such different fairs and such different collector bases that we felt we had to do both fairs. There are logistical issues, but both venues are essential for us. For the fair goer, you’re choosing one or the other.”

With so much visual candy on offer, it is relatively difficult to make a big impression at TEFAF, though this iteration, the 27th, had a wow factor entry, with the curated display of Shaker furniture at Paris based Galerie Downtown, brilliantly organized and installed as a mini Shaker Village home by Francois Laffanour and Philippe Segalot. The art dealers also collaborated with the Shaker Museum in Mount Lebanon, New York, and had a handful of loaned works. Apart from those minimal and beautifully crafted primarily wood objects, the rest of the stand sold out or had pieces placed on hold during the first few hours at relatively modest prices ranging from $10,000 for a rocking chair to $300,000 for a great, multi-drawer cupboard. The no kidding title, “Masterpieces of Shaker Design (1820-1890),” certainly ushers in a new dimension of a potentially rich vein of design collecting, though supply for top works is certainly modest.

There were other less conspicuous finds of unfamiliar work, such as the Futurist fueled works on paper by the Russian/Ukraine artist Alexander Bogomazov at London’s James Butterwick, tucked upstairs in the special venue Paper section. If you can’t afford an Italian Futurist Balla or a Severini, Bogomazov is a definite alternative at prices ranging from €20,000 for a work on paper to €650,000 for an oil, “Landscape-Locomotive” from 1914-15. The barely traveled artist who died in 1930 must have seen Futurist works in foreign publications, according to Butterwick.

Another standout in the lesser tread Paper section was London’s Stephen Ongpin Fine Art, where a decidedly rare and superb Jean-Auguste Dominique Ingres’s “The Gatteaux Family” from 1850, part lithograph and pencil combine work depicting his close friend Edouard and his parents, was on offer for €350,000. The joined sheets of paper cut out and laid down by the artist on a larger sheet is ultra rare in that the artist’s original drawings of the family were burned during the havoc and destruction wrought during the 1871 Paris Commune. It previously was owned by the late dealer and drawing connoisseur Jan Krugier.

Another world-class and rare work on paper was on the Old Master turf on the main floor at London/Munich Colnaghi/Katrin Bellinger, where Rembrandt Harmensz Van Rijn’s early and smiling “A Young man leaning on a stick, turned to the left,” from circa 1628 and executed in pen and brown ink when the artist was 20 years old. It carried a €700,000 price tag.

In that small scaled, almost jewel-like realm, Joris Hoefnagel’s “An Allegory of the struggle between Avarice and Ambition,” a great title for any art fair, dated 1571, was priced at London’s Johnny van Haeften for £550,000. It has been on loan to the Fitzwilliam Museum for the past 30 years and the dealer is selling the multi-figured composition with the nude wrestlers best seen with the aid of a magnifying glass, on behalf of the family who has owned it for over a hundred years.

On that broad Old Master front, where the roots of TEFAF had its rather modest beginnings, a sumptuous, table top composition at New York’s French and Company, Willem Claez. Heda’s “Still life with Blackberry Pie,” signed and dated 1644, carried a $12 million price tag. It too had seen relatively recent auction action when it sold to the dealer at Christie’s London last July for approximately £5 million.

It wasn’t so easy digging out completed sales on the first go round, though at New York’s van de Weghe Gallery, a glittery, silver leaf and oil on canvas, “IBM Towers, Chicago” from 2013 by the New York artist Enoc Perez, sold to a Belgian collector for $75,000.

Another early sale took place at the Paris/Cologne/St. Moritz Karsten Greve where Gotthard Graubner’s grandly scaled wall relief, “Saisschleier II” from 1995-96 in acrylic and mixed media on canvas and synthetic cotton on canvas, sold in the region of €300,000. The reddish hued, 81 ½ inch by 63 by 7 ¾ inch work also looked inviting as a king-sized bed for weary visitors.