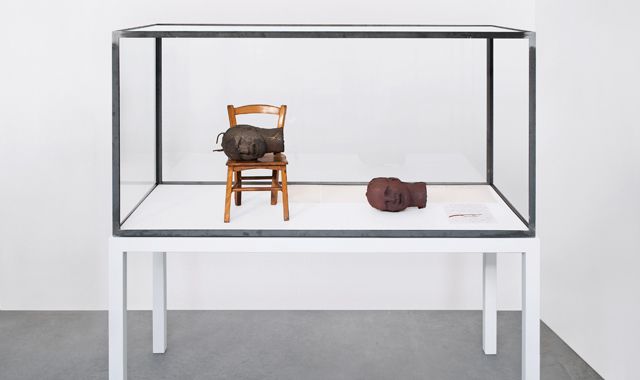 Joseph Beuys’s “Untitled,” restored by the artist in 1985.

BASEL, Switzerland — The sales register continued to ring for modern and contemporary art at the 45th edition of Art Basel, though at a slower pace than the frenetic action on Tuesday and Wednesday, when attendance was limited to VIP card holding guests. Some seasoned observers say Basel is a one-day fair, meaning a lot of sales take place at the opening and then the event goes into sleep mode, but the current strength and depth of the market is extending that critical time frame.

“I was expecting today to be quiet,” said New York’s Fergus McCaffrey, “but I’ve been pleasantly proven wrong.”

The dealer’s stand, dedicated exclusively to Post-War Japanese artists, racked up over 25 transactions since opening day at prices ranging from $25,000 to $2.5 million, including Jiro Takamatsu’s impressive oil on wood and metal abstraction, an untitled shadow painting from 1966 that sold to a European collection for $475,000.

“The best collectors in the world are buying this material,” noted McCaffrey, “and it’s become so much more of a broader market.”

The Takamatsu bore ghostly elements of both Duchamp and Rauschenberg, with a wooden cross beam running horizontally across the 26-inch wide canvas and pierced by a metal hook. The painted shadow hovering over it resembled a long-handled brush.

Though Modern material seemed to be in short supply as though some super-power had turned off the tap, good to excellent examples of Post-War and contemporary works seemed to be in relative abundance.

Madrid’s Galeria Elvira Gonzalez sold Rudolf Stingel’s rather early “Untitled” painting from 1988 in the region of the $850,000 asking price and a striking, wall hung Donald Judd copper and red Plexiglas sculpture, “Untitled (Bernstein 81-8),” from 1981 that sold to another European collector in the realm of $1.5 million.

Asked if the Judd buyer was new to the gallery, partner Fernando Mignoni said, “It’s someone we knew of but had not met before.”

That is part of the beauty of Basel, at least for the dealers.

An interesting medley of small-scaled works from American Ab-Ex artists were in fresh evidence at New York’s Washburn Gallery, led by an early Surrealist influenced Mark Rothko 20- by 28-inch oil, “Heads,” from 1941-42 that sold to a European collector for $550,000 and a small but punchy Jackson Pollock, “Untitled,” from circa 1944 in gouache, India ink, and graffito on paper that sold for $285,000. The red and green hued Pollock bore the distinctive side view shape of a hungry she-wolf, indicative of greater things to come.

There was a wind blown colony of Alexander Calder painted metal sculptures at New York/London Helly Nahmad Gallery, and of that delightful group, three had sold at prices ranging between $1 to 2.5 million.

The largest of that elegant trio, “Un Noir et un Jaune” from 1972, a painted metal and wire hanging mobile with red, yellow, and black leaves and measuring 38 by 86 by 20 inches, hovered over the stabiles standing below on a purpose-built and elevated platform.

“You need the material to do these huge fairs,” said London-based Helly Nahmad, “and I think the material is dwindling. It’s harder and harder to find 20th-century works. There’s not enough evening sale material here for the space to get all the big guys here,” added the dealer, referring to the auction term for major sales. “They won’t come for a $500,000 Donald Judd but at the same time, it’s still the best fair on earth by a mile.”

There was, as it turns out, a beautiful Pablo Picasso painting of a woman from 1963 at Zurich’s Thomas Ammann Gallery, priced in the region of $12 million, and an equally alluring Fernand Leger oil of two reclining female nudes from 1954, priced at $3.2 million.

There appeared to be strong interest in both works as the storied and retired Swiss dealer Daniel Varenne entered the stand and slowly walked over to the Leger, informing Doris Ammann, “I came back to see my girl friends.” Varenne sat down and admired the painting, which was displayed on a wooden easel.

“There is good interest in the modern things,” said Ammann, “but people want to take their time and we have to respect that.”

Other works in the stand were sold quickly, including two large-scale works by the artist collective Bruce High Quality Foundation, as “Olympia,” a unique silkscreen from 2014 and measuring 72 by 108 inches and framed by slender and lit neon tubes, sold in the region of the $200,000 asking price. Both versions of the black-and-white reprise of the famed Edouard Manet painting of the reclining nude beauty, attended by a black maid, drew strong interest.

Ammann also sold two large paintings by New Yorker Enoc Perez, whose work is currently on exhibit at the gallery’s Zurich location. At Basel, Perez’s “Nude” from 2012-13 at 80 by 60 inches sold for around $220,000 as did “Untitled (Yves Klein Blue)” from 2013 and scaled at 60 by 48 inches in oil, acrylic, silver leaf, and inkjet on canvas.

That modern feeling was also in the air at Geneva’s Marc Blondeau, where Louise Lawler’s C-print, “18-20” from 2003, from an edition of three, depicting a group of Marcel Duchamp objects as they were being prepared for a Phillips de Pury auction, sold for more than $100,000.

In the so-called “Feature” section of the fair, where galleries mount small single artist shows, the standout was at New York’s Luxembourg & Dayan with four paintings in acrylic and sand on canvas by the Italian Pop Art master Domenico Gnoli, dating from 1959 to 1967. All featured a comfy looking bed, some with figures under the covers.

The only one that was on offer quickly sold, the smaller scaled “Dormiente No. 2” from 1966 that is understood to have brought between $3 and $4 million. The gallery declined to give a price.

Though missed on the first round of reporting early sales due to the traffic jam in his stand, Paris/Salzburg dealer Thaddaeus Ropac nailed a number of big sales, including the huge, chain-saw carved and painted sculpture, Georg Baselitz’s “Self-Portrait as Rodin’s Thinker,” which sold to an American collector for 2.3 million euros.

Ropac also sold work from another great German artist, Joseph Beuys’s stunning sculpture, conceived in 1961, executed in 1976 and rearranged in 1985-86, just days before the artist’s death.

“Unbetitelt,” including a self-portrait cast iron head resting on a child’s chair and another head lying on its side in the glass vitrine, sold for 2.2 million euros. A 20- by 16-inch acrylic and silkscreen ink on canvas Andy Warhol from 1980, “Joseph Beuys,” logically hung next to the vitrine, also sold for 325,000 euros.

“You always think,” said Ropac, speaking of the fair, “you can’t top what you did here, but you can.”

The gallery also sold a trio of 74-inch high Alex Katz painted aluminum cut-outs of swim suited women, each playing with a beach ball, a la Roy Lichtenstein’s famed Pop Art painting of the same subject. The works, “Chance (Anne),” “Chance (Vivien),” and “Chance (Darinka),” from 1989-90 and long held in the artist’s own collection, sold as a group to a Swiss collector for $1.5 million.

Looking a bit starry-eyed, Ropac said he decided not to rehang the stand after the sales as he usually would but to keep the works as is, in opposition to the thoughts of his staff.

“We could do it but I enjoy looking at these great things which you work hard to get.”

Back in the more contemporary arena, New York’s Gallery 303 saw numerous sales, including two untitled abstract paintings by Jacob Kassay at $150,000 apiece and Kim Gordon’s “Chelsea Series (Silver Wreath 2) from 2014 in spray paint on canvas for $30,000.

Nearby at Galerie Chantal Crousel, Wade Guyton’s super-scaled “Untitled” canvas from 2013, executed in Epson Ultrachrome inkjet on linen and measuring 10 feet 8 inches by 9 feet 2/8 inches, sold to an otherwise unnamed museum for $350,000.

Five other like-sized works and similarly composed by Guyton sold for the same price at his other primary market dealers stationed in Basel, including galleries Capitain, Marconi, Pia, and Petzel.

You could almost call it a democracy.