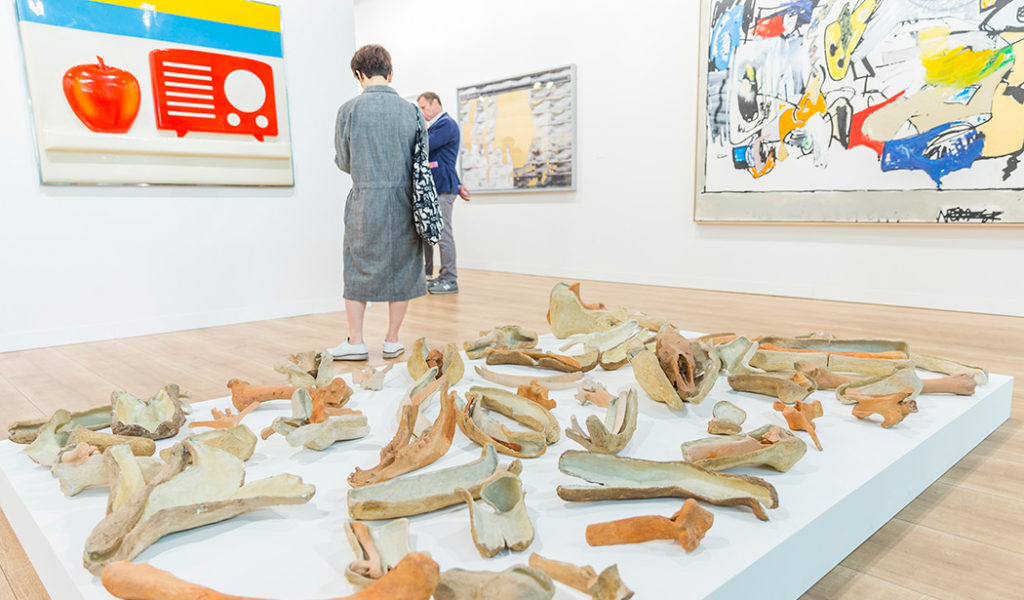 With Art Basel now in full swing, to help you plan your visit, we’ve scoured the fair for standout booths, in terms both of offerings and their presentation. Here are six that are not to be missed.

Helly Nahmad: The theme at this booth is black and white, evidenced in the thick-piled rugs of those colors that divide the space in two. Exceptional offerings include the jet-black 1965 Alberto Burri “Nero Plastica,” in burnt plastic on canvas; Rudolf Stingel’s snow-white 2003 “Untitled (Cinque),” in Styrofoam and silicon on canvas; and Lucio Fontana’s celestially punctured 1963 “Concetto Spaziale la Fine di Dio,” in an all-over smoky black shade. The gallery acquired the Fontana recently at auction, as well as Pablo Picasso’s dazzling 1938 “Femme assise sur une chaise.” Noticing such entries here is part of the viewing experience.

Mitchell-Innes & Nash: Postwar classics combine in this booth with more jarring contemporary fare in a vibrant mix with an electric charge. Among the classics is the jewel-like 1949 Jackson Pollock drip painting “Number 21.” Composed of oil and enamel on paper mounted on board and not seen in public since 1979, the gallery has it pegged at $25 million. Facing the exquisite Pollock, with its underlying grid of black dots, is Pope. L’s much larger and noisier abstraction “Gold People Dick the Mist,” from 2015-16. You can almost hear the crackling dialogue between the paintings. Also on display is Tom Wesselmann’s 1964 Pop art wall relief “Still life #53,” made of painted molded plastic and featuring an old-fashioned radio, as well as Nancy Graves’s decidedly minimal 1971 floor-sited work “Scatter Piece,” which resembles in part the bone fragments from an archaeological dig.

Barbara Gladstone: A large part of Art Basel’s allure is the better-than-average chance of stumbling across gems from different eras. Among the gems on offer here is Keith Haring’s red and yellow 1989 acrylic “Untitled,” depicting a cavorting group of acrobatic figures emblematic of that night-club-infused time. Jumping ahead a decade or so, the figurative pulse beats as well in Carroll Dunham’s 2013-2016 mixed-media “Left Turn,” with its surreal flock of blackbirds hovering around a limbless tree trunk. The outlandish figuration of Haring and Dunham is replaced by cool abstraction in R.H. Quaytman’s 2016 precise and patterned “Los Angeles,” a convincing blast of ocean blue in oil, lacquer, and gesso on wood, and “Chicago,” executed with the same mixed-media concoction and somehow delivering the brawn of the title city’s architecture.

Galerie Zlotowski: Part of the fair’s “Feature” section, the Paris gallery has assembled a stunning group of 22 works by Kurt Schwitters, ranging in time from 1919 to 1947. The choice to focus on Schwitters is a timely one, as this year is the 100th anniversary of the birth of Dada, a group with which Schwitters was intimately tied, although it never accepted him. Among the rarest of the pieces on offer is the 1942 “Untitled (Merzrelief Blau, Beige).” Composed of oil, wood, plaster, and tin plate on wood panel, it summarizes the quirky brilliance of Dada and Schwitters’s uncanny ability to produce art from found objects. Among the other 21 works, all collages on paper, is the 1920 “Mz 33”; once part of the collection of Alfred H. Barr, it bears a postal code from a partially torn envelope and an added red heart in the center of the image. The 1919 “Untitled (Silhouette of a man),” the earliest of the group, displays an anonymous profile with Schwitters’s distinctive signature and date written on an incline directly under it. They’re “very difficult to gather,” Yves Zlotowsky said of the assembled collages, “because the private collectors have a very strong attachment to the work.”

Hazlitt Holland-Hibbert: Modern and contemporary British masters rule this booth, including a group of Bridget Rileys with real wall power: four optically patterned works on paper from 1965 and a single shaped-canvas tondo in oil from 1963 titled “Uneasy Centre.” Also gracing the stand is Barbara Hepworth’s beautifully shaped 1965 abstraction “Three Forms (Zennor Carn),” made of carved slate and set on its original black wooden base, as well as the early and convincing 1981 Sean Scully painting “Enough,” redolent with horizontal slabs of muted color. There are also two Howard Hodgkin paintings, of which “The Meeting,” a relatively early oil on canvas from 1963-64, resonates with the artist’s unmistakable, mostly abstract but difficult to pigeonhole style.

Blondeau & Cie: The gallery’s ravishing mix of modern and contemporary is anchored by Fernand Léger’s 1928 geometric, Corbusier-influenced “Profil Orange,” hailing from the private collection of an individual whose father acquired the still-mint-condition work from the artist’s studio through the legendary dealer Paul Rosenberg. Provenance can’t get much better than that. The stand also features Albert Oehlen’s 1996 color charged-abstraction” Freier Stress,” measuring 78.7 by 63 inches, and the politically minded 1987 General Idea painting “AIDS,” executed in the same colors and 72-inch-square format as Robert Indiana’s famed circa 1963-64 “Love” painting. Reaching redline RPM in terms of style and date contrast are Jean Arp’s petite 1920 “Portrait” in India ink on paper and Jim Shaw’s 2004 “Untitled (Monster Face #2).”

303 Gallery: Photography is the leitmotif here, starting in a major key with a trio of vintage Stephen Shore American-road-trip images: “Presidio, Texas,” from February 21, 1975, and “Church and Second Streets, Easton Pennsylvania,” from June 20, 1974. The 19 3/8-by-20-inch Chromogenic prints work their magic with time capsule realism. On a larger scale, Rodney Graham’s extraordinary 2016 self-portrait “Artist in Artist’s Bar, 1950’s” captures the deadpan artist seated alone in a booth, nursing a pint of beer under ’50’s-style abstractions — actually painted by Graham himself, adding another conceptual layer to the tour-de-force composition — hung salon-style on the wall above his head.