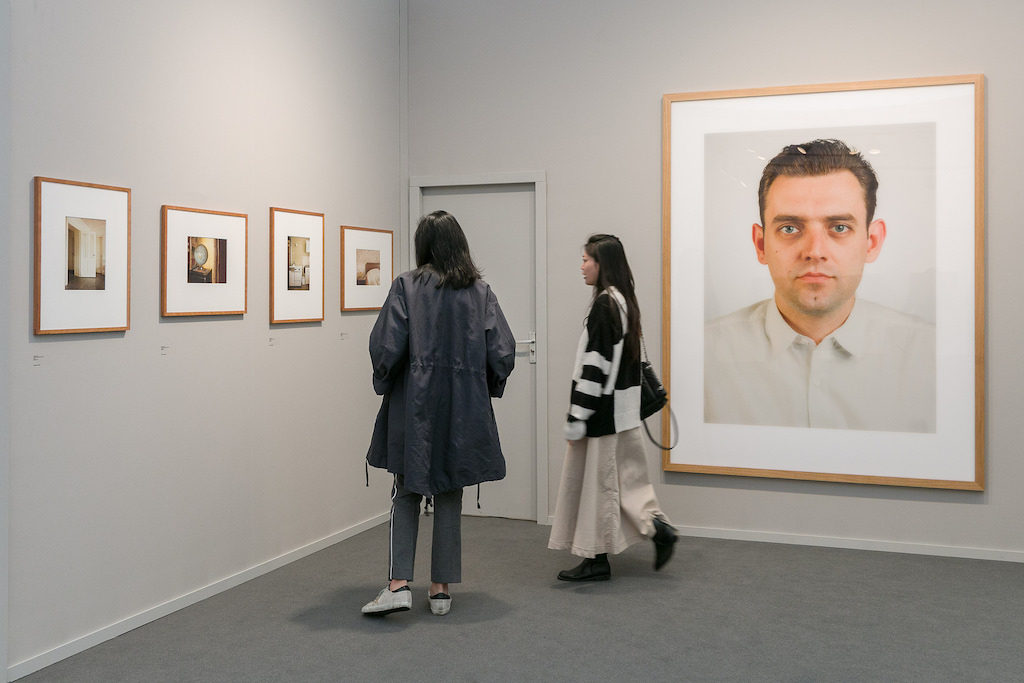 After the blur of V.I.P. viewing on Wednesday in the two Frieze tents in Regent’s Park in London, a longer second look at Frieze Masters, the hybrid platform comprising a brew of international dealers specializing in everything from Old Masters to blue-chip contemporary, delivered another flood of art-market data.

At the booth of Skarstedt, which has galleries in London and New York, Eric Fischl’s oil-on-linen painting The Bed, the Chair, Crossing (2000) sold in the region of the $850,000 asking price, and a multi-panel editioned work by Thomas Schütte, Kleine Geister (1996), sold for approximately $120,000. Though already removed from the stand, some 1982 Georg Baselitz drawings, valued at around $100,000 each, also found new homes.

“Another important painting sold,” said Bona Montagu, a Skarstedt partner who directs its London branch, “but we can’t talk about it.”

A few yards away, at New York’s Acquavella Galleries, Wayne Thiebaud’s crisply painted Office, dated 1985/87/99, an oil on wood panel measuring only about 10 by 16 inches sold in the region of its $750,000 asking price. “He can paint all different subjects, not just cakes,” quipped Eleanor Acquavella, referring to Thiebaud’s cult status in that culinary pantheon.

The gallery also sold a small, early Ed Ruscha, the oil-and-graphite-on-paper Lemon Drops, which carried an asking price of $650,000.

“I think the material is pretty strong for an art fair,” Jeremy Larner, a New York–based private dealer, said as he admired a large-scale Jean Dubuffet painting, Touring Club (1946), on offer for $15 million at the Acquavella stand. “This is where the great art is, and you can buy some history.”

Angela Westwater of New York’s Sperone Westwater was holding court in her solo presentation of Guillermo Kuitca—titled “The Architecture of Everything”—and happily mentioned the sale of the artist’s wall-hugging triptych, Den Haag-Praha (1989), a trio of painted mattresses mapping various European cities. The gallery said it went to an important but unnamed European museum for around $750,000.

“This was the really choice piece,” Westwater said, “and was in the Bienal de São Paulo the year it was painted, when Kuitca was representing Argentina.”

Each of the roughly 77-by-56 by-2¼-inch mattresses (two painted white, one in black) feature pre-Google roadmaps that apparently trace personal yet unspoken journeys by the artist. 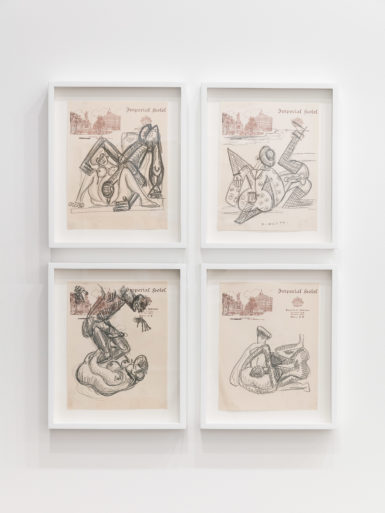 The creator of masterpieces such as Battleship Potemkin (1925) and Ivan the Terrible (1944) was also a serial draftsman, often working on hotel stationery (as Martin Kippenberger famously did decades later), typically using colored pencil and graphite. Eisenstein made some 5,000 drawings, according to art consultant Matthew Stephenson, who co-organized the stand with Gray. They had sold a group of four untitled drawings on stationery from the Imperial Hotel Mexico City, dated ca. 1931, at a price between $40,000 and $80,000.

Incredibly, another cinema great was featured not far away, at London’s Amanda Wilkinson, which had large-scale and late text and image paintings by Derek Jarman from a body of work he sometimes called “The Queer Series,” made during the artist’s fatal struggle with AIDS. The paintings, such as Blind Date (1992), scaled at about 8 by 5 feet, and priced at £60,000 (about $78,500), had yet to be sold, but the affinity between Eisenstein and Jarman was an unexpected mind-bender.

Back in the main arena of Masters, the pairing by Sprüth Magers of early works by German photographers Andreas Gursky and Thomas Ruff with the serial photographs of their teachers, Bernd and Hilla Becher, was also revealing.

“We hung the big Gursky on Sunday,” said the gallery’s Felix Lorenz-Wohnhas, “and somebody bought it on Sunday night.” I guess you could call that an ultra-early V.I.P. purchase. 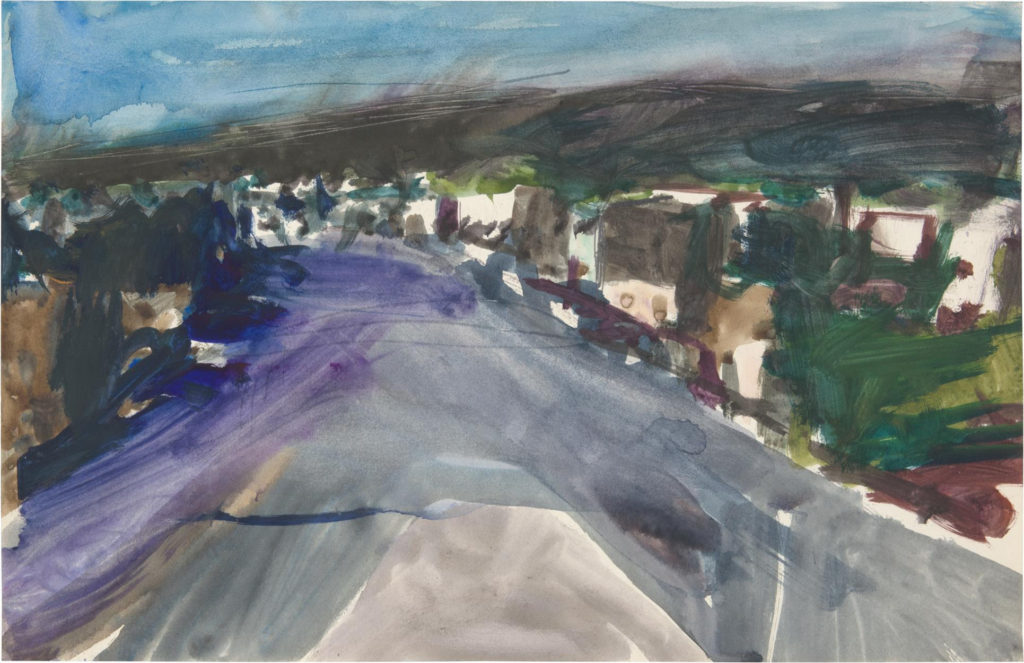 A mini-survey of Richard Diebenkorn, from early abstractions to later “Ocean Park” works, at New York’s Van Doren Waxter found favor. An untitled Berkeley landscape—a gouache on paper from around 1958–64—sold in the region of its $125,000 asking price, as did another untitled work, an “Ocean Park” beauty from 1976 (an acrylic, gouache, and ink on paper), which went for within the region of its $400,000 price tag. One of the artist’s final creations, a lovely postcard-sized acrylic, gouache, charcoal, and graphite on paper, untitled and from 1992, sold for around $175,000.

In Van Doren Waxter’s closet (a favorite fair accessory for showing additional work), an untitled Diebenkorn from ca. 1967—a page-sized depiction of a jet-black rotary dial telephone—went to another client for approximately $60,000.

A trio of notable postwar Italian artists—Lucio Fontana, Enrico Baj, and Piero Manzoni—were on view at London and Turin’s Mazzoleni Art, and two of the eye-popping Baj works had sold.

Canterano Pneumatico (1961), which depicts a fantastic dresser bureau in oil, collage, and mixed media on canvas sold in the range of €120,000 ($138,000), and Baj’s supercharged Femme au Diapason (1960), an oil, collage, and mixed media on board that includes an antique watch face for an eye as well as Murano glass stones, went for around £150,000 ($196,000). “Baj is not part of the international art market yet,” said Luigi Mazzoleni who runs the eponymous Mayfair gallery, “but we’re working to change that.” 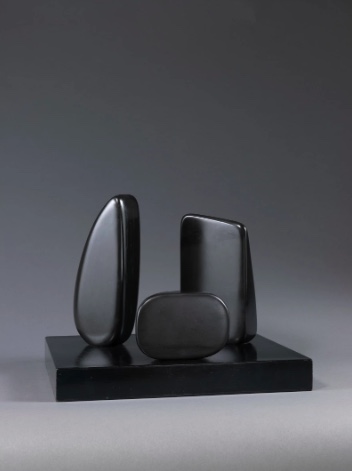 British art had a strong foothold at London’s Hazlitt Holland-Hibbert, with a handsomely drafted Henry Moore drawing, Ideas for Sculpture (1938), selling to an English collector for £180,000 ($235,000) and a small-scaled and decidedly dynamic 1965 Barbara Hepworth sculpture, Three Forms (Zennor Carn), going to an American collector for approximately £650,000 ($850,000).

“We always do well here,” the Mayfair-based James Holland-Hibbert said, “because it’s our patch and it gets a good London crowd.”

The pace of transactions at Old Master stands here seemed to be slower than at those of their modern and contemporary peers. However, a dazzling yet demonic oil study by Munich Secession artist Franz von Stuck, Luzifer (ca. 1890), sold at London’s Stair Sainty Gallery for a price understood to be in the low six figures. A larger oil of the same name is in the National Gallery for Foreign Art in Sofia, Bulgaria, and was once owned by the king of Bulgaria.

Seasoned Dutch Master picture dealer Johnny van Haeften had several works on reserve but no firm sales on Thursday. “It’s not like selling shoes, but I’m optimistic,” said van Haeften, who showed at TEFAF, the European Fine Art Fair, in Maastricht in the Netherlands for 40 years. “Now this is the only fair I do.”

Back on more familiar Frieze turf, New York’s Van de Weghe Gallery moved what is believed to be the most expensive artwork so far transacted at Masters: a brawny, black-hued Ab Ex–era Franz Kline painting, Laureline (1956), measuring 57 by 81 inches, which went to an American collector for around $8 million.

Though the work has never before appeared at auction, an untitled study for it from around 1956 sold at Christie’s New York in September of last year for the rather-pedestrian price of $75,000. In retrospect, what a bragging rights’ bargain!

Over at the Paris-based Applicat-Prazan, Hans Hartung’s dark and richly textured abstraction T1945-14 (1945)—mixed media with oil and sand on paper laid down on panel—sold to a European for €430,000 ($495,000). And, said partner Franck Prazan, “We have some other things that are boiling.” 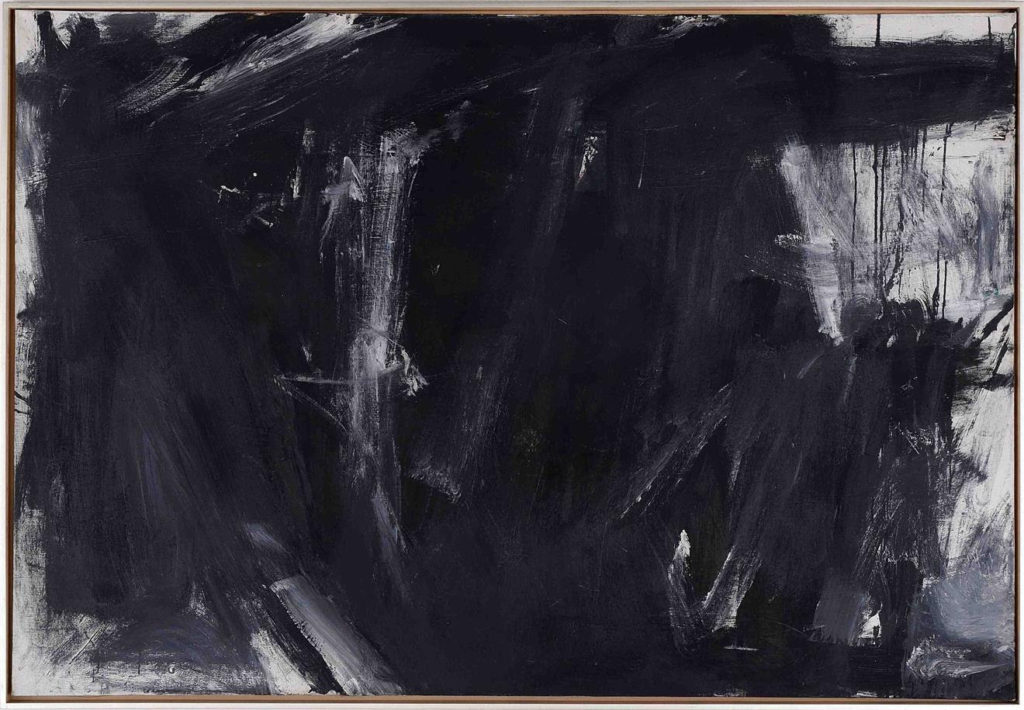