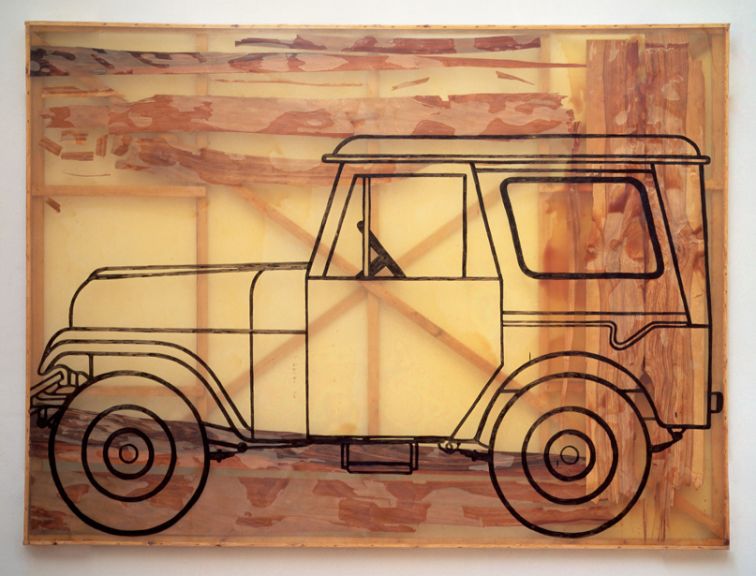 LONDON — The 13th edition of Frieze London in Regent’s Park opened to V.I.P. cardholders on Tuesday morning, the same moment as its younger sister fair, the four-year-old Frieze Masters, opened its doors far across the manicured park.

Since it’s impossible to be in two places at once, choices were made and it appeared the bigger queue was at the contemporary fair where visitors were greeted in the entry hallway by rather grim collaborative sayings painted in white on black backgrounds, including “Overcome your challenges or they will reappear” and “Don’t Stop Now—The End is Near.”

That sobering, black on black hallway, dotted with what appeared to be reclaimed prisoner benches, complete with stationary metal hoops to accommodate handcuffs or chains, wasn’t exactly inviting. But things perked up once in the central meeting point of the grandly proportioned and bespoke tent, as the more familiar rituals of art commerce slowly kicked into gear.

At London’s White Cube, a brand new Damien Hirst, “Holbein (Artists’ Watercolours)” from 2015 in couch enamel and sign writing paint on canvas, sold right away for £750,000 to a US collector. The piece could be viewed as a very distant cousin to the stunning “Gerhard Richter Colour Charts” exhibition at London’s Dominique Levy, which includes nine paintings from the original 1996 series. Hirst’s mammoth chart at 94 by 158 inches consists of rectangular shaped color swatches running nine rows across and nine rows down the busy canvas.

At London’s Lisson Gallery, a vibrantly colored and patterned abstraction by New York painter Stanley Whitney, “Inside Out” from 2013, scaled at 96 by 96 inches in oil on linen and representing his debut at the gallery, sold for $85,000. At least three of the artist’s six untitled smaller works, each measuring 12 by 12 inches, sold for $15,000 apiece during the first hour of the V.I.P. preview.

Lisson also sold Ai Wei Wei’s purple hued “Iron Root,” in cast iron and auto paint from 2015, for around half a million euros to a Middle Eastern client, according to the gallery. The artist is currently featured in a survey exhibition at the Royal Academy, including an inviting ensemble of sculpted trees installed in the courtyard.

“I was very impressed with the energy of the fair this year,” said Polly Robinson Gaer, executive director of Ropac in London, “especially since our price points are very high compared to the other booths, so we’re really pleased with the outcome.”

It was about at this juncture, some 2 ½ hours into Frieze London with its 164 galleries, that I remembered my mission was across the park at Frieze Masters.

A brisk 15-minute walk later, the dirigible-like silver outline of the Masters’ tent appeared and London’s mini-answer to TEFAF, the European Fine Art Fair in Maastricht, but with better 20th-century art, unfolded.

It quickly became evident that last year’s iteration with Helly Nahmad Gallery’s exquisitely entertaining “The Collector” installation has gone viral here, with a number of galleries trying it on, bringing a mix of art and furniture together with a patron saint dealer or character added to the flavorful mix.

London’s Richard Nagy Gallery did it with German Expressionist works and vintage Austrian furniture, Dickinson staged an ambitious “Masters of Cubism” art salon as a homage to Paris dealer Leonce Rosenberg, and cooperating dealers Moretti (London) and Hauser & Wirth combined 14th-century Italian painters with a modernist and contemporary cast of Hauser & Wirth’s deep back room, including a sultry yet somehow religious Marlene Dumas, an ink on paper of a nude girl, “Magdalena (de Pelsie)” from 1996. The Dumas hung alongside the 14th-century Luca de Tomme’s “Madonna and Child with Christ Blessing” in tempera on panel. It doesn’t take long to get the idea that the dealers and Frieze Masters would like you to embrace (and collect) the sweep of those centuries.

The acquiring pace at Frieze Masters appeared slower this year as even top guns, such as New York’s Van de Wegh Gallery, with works by Roy Lichtenstein, Andy Warhol, and Jean-Michel Basquiat, and Acquavella Galleries, armed with a stunning Claude Monet landscape of Monte Carlo from 1883 and a rare and beautiful family portrait by Edgar Degas (“Henri Rouart et sa fille Helene”) from circa 1877, priced at $10.5 and $8 million respectively, had no initial takers.

There was some action at New York/London’s Skarstedt Gallery, usually a hotbed of notable transactions, as Alighiero Boetti’s “841/ Beige Sahara” from 1967, consisting of industrial spray paint on cardboard and cork lettering at 27 1/8 by 27 1/8, sold in the $500,000 range and Albert Oehlen’s untitled and rather biomorphic abstraction from 1991 sold for around $700,000 to a European collector.

Similarly, at New York’s Sperone Westwater Gallery, an early and rarely seen Joseph Kosuth, “One and seven-Description II” from 1965 and consisting of seven acrylic on canvas panels, each measuring 15 by 15 inches, sold for $300,000.

The hottest sector sales wise appeared to be the so-called “Spotlight” section of galleries hosting one-person stands, led by Seoul/Beijing’s Hakgojae Gallery and the Minimalist, Robert Ryman-esque work of Korean artist Chung Sang-hwa. The booth sold out, with the seven featured paintings from the 1970s and ’80s going for $500,000 to approximately $1 million.

“His prices have jumped five times what they were last year,” said Eunsoo Woo, Hakgojae’s art director. “Still, we were surprised at how quickly they’ve sold.” Buyers for Sang-hwa hailed from the US, Europe, Korea, and China. His name will become more familiar to Westerners soon, as Dominique Levy and New York’s Greene Naftali will mount joint New York shows in 2016.

Back to the Spotlight stands, London’s Stephen Friedman sold New York sculptor Melvin Edwards’s untitled installation from 1970, comprised of hung barbed wire and chains, and installed here for the first time, for $300,000 to an American collector. The gallery also sold a group of Edwards’s spray paint and watercolor on paper works from 1974 at $25,000 each.

In that same rich and relatively undiscovered vein, the late African-American abstract painter Sam Gilliam was featured at Los Angeles’s David Kordansky Gallery with a lyrical presentation of the artist’s Drape series, which sold at prices ranging from $225,000 to $500,000. Of those uplifting works, “Swing Sketch” from 1968, comprised of acrylic on canvas with a leather cord, sold for $350,000.