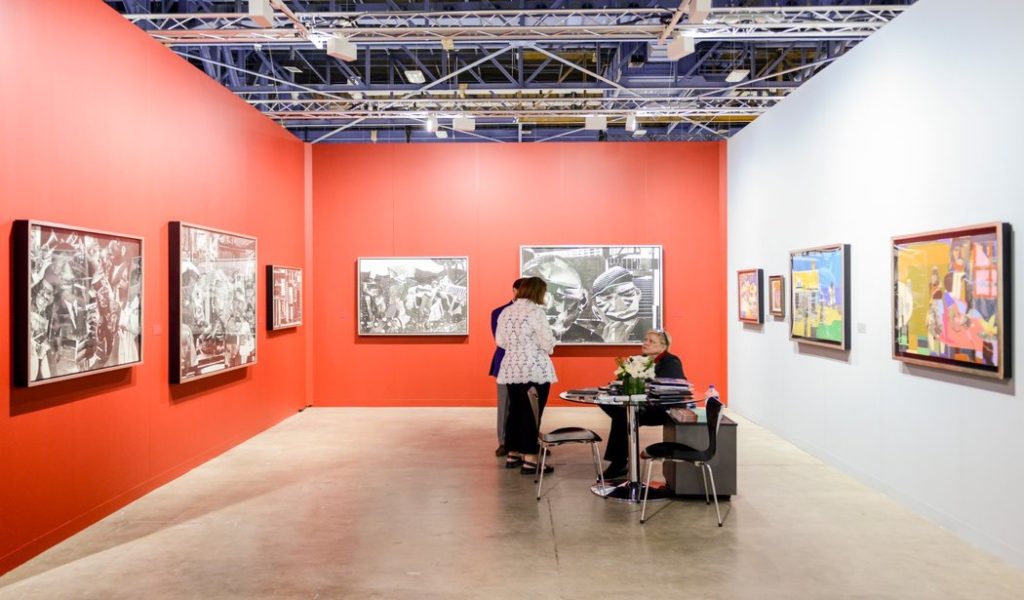 Bologna’s Galleria Maggiore is displaying a sweeping solo presentation of the artist’s paintings, watercolors and etchings, from a 1929 landscape to a stunning still life (aka natura morta) from 1960.

It is one of fourteen “focused presentations” in the fair’s Survey section at, all of them dealing with work from before 2000.

The gallery has already sold a 33-by-50-cm oil-on-canvas natura morta from 1948 — a lineup of variously shaped bottles and containers arranged on a table top — for an undisclosed price, as well as a late still life watercolor from 1962.

The display is the largest selection of Morandi’s work exhibited in North America since last year’s quiet blockbuster of an exhibition at David Zwirner Gallery in New York.

Another standout of the Survey section is Robilant + Voena’s presentation of work by Mimo Rotella (1918-2006), an Italian master of decollage who single-mindedly poached and transformed advertising images with Warhol-esque brilliance.

Of the dozen works on display at the London/Milan/St. Moritz gallery, which range in price from approximately €120,000 to about €700,000, standouts include “Ice Cream” from 1963, a photographic reproduction on canvas measuring 33 by 30 inches and featuring an ice cream bar with a perfectly bitten chunk missing, and “Birra” from 1962, in decollage on canvas (another way to say torn posters re-appropriated and cut), depicting a layered image of a young woman eyeing a cold brew. One of the larger works, “Divertiamoci (let’s have fun)” from 1966 and scaled at 36 by 66 inches, presents a wide-angled view of young men and women seen through the inside windshield of a Fiat car.

Rotella’s oeuvre, as presented in a telephone book-sized catalogue raisonné available at the stand, is decidedly sexy and chock full of humorous Pop Culture references, with a kind of Italian Mad Men sensibility. His work from the ’60s also brings to mind the photo-based works of Robert Rauschenberg from the same period, when Rauschenberg was working in Rome, and Rotello is certainly a relatively inexpensive Italian alternative to the early American Pop masters.

Betye Saar at at Roberts & Tilton

Saar is currently the subject of a massive exhibition in Milan at the Prada Foundation (through January 8). The selection of her work here is dominated by an altar-like piece, “Mti,” from 1973, which commands the center of the stand with a palm frond-shaped table supporting doll house-like compartments holding extraordinary found objects, with the floor around the table artfully littered with devotional flotsam and jetsam contributed by viewers.

Single mixed-media assemblage works hang on the walls surrounding Mti, including stunning examples like “Wizard” from 1972, which first appeared in a 1975 exhibition at the Whitney Museum of American Art, and “Visionary” from 1994.

“This is just an introduction, the tip of the iceberg to her oeuvre,” said founding partner Bennett Roberts. “This is the mystical aspect of her work. She’s most known for her political work, like ‘Liberation of Aunt Jemima’ from 1972” — an assemblage that features the kerchiefed woman bearing a broom in one hand and a rifle in the other.

The original, small-scaled collages they are based on are in the collection of the Museum of Modern Art, and these old-technology, photostated blow-ups literally expand on their embrace of jazz, the family, and the then-percolating Civil Rights Movement.

Bearden’s big vision is seen here in works like the 35-by-47-inch “Jazz (Chicago/Grand Terrace,” a packed and explosive view of black musicians jamming in a jumble of saxophones and drums, with a cigarette-chomping musician at center — an image that feels at once utterly of its time and startlingly contemporary.

The Russian Avant-Garde at Galerie Gmurzynska

In the main exhibition area, Galerie Gmurzynska’s blow-out stand, designed by Claude Picasso, presents an exhibition devoted to the Russian avant-garde in advance of next year’s 100th anniversary of the Russian Revolution. Curated by Sir Norman Rosenthal, it’s a wild pastiche of photographs, paintings, and architectural drawings that left this viewer spellbound.

Incredible and no doubt rare works abound, including a sensational and huge architectural drawing by W. Magat and N. Rosenfeld, “Design for the Decoration of the Theatre Square, Moscow, on the Occasion of the First Anniversary of the Revolution” from 1918.

“People now go more to art fairs than visiting galleries,” said Mathias Rastorfer, a partner and the director of the Swiss gallery. “So it’s important for us to do gallery-like exhibitions at the art fair.”