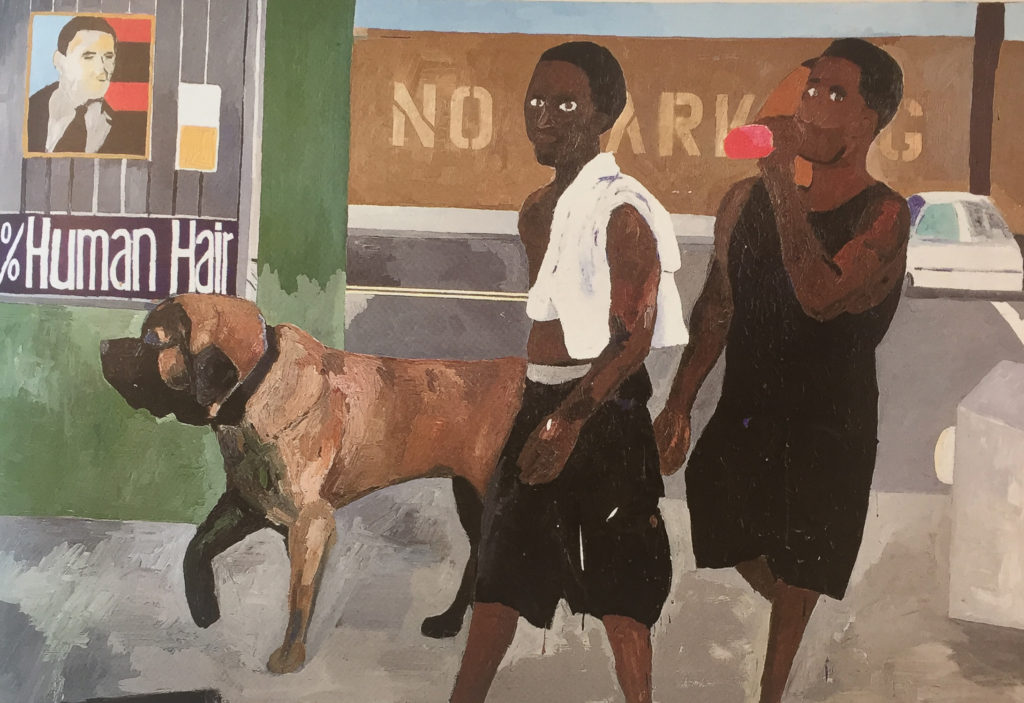 In the jarring wake of this past June’s Brexit vote, the art market is still contemplating what effect it may have. This is especially true in London, a major center of the art world that stands to be most affected when the formal exit from the European Union Is negotiated.

With that in mind, sellers appear to be more cautious and slow-moving, factors that already prompted a sharp decline in volume rat registered in the June round of sales.

“It’s not going to be a season of Bacon and Freud,” says Jean-Paul Engelen, worldwide head of contemporary art at Phillips. “It’s certainly a buyer’s market, but you still need confidence on the seller side.”

Engelen emphasized the continuing talk among clients about the Brexit vote, along with the combined effect of a weaker pound and dropping real estate prices. “I wouldn’t say they’re confidence builders,” he remarks.

“No one actually knows yet what Brexit will mean,” says James Sevier, Sotheby’s senior director of contemporary art in London, “and much of it depends on what currency you’re buying in.”

Francis Outred, Christie’s chairman and head of postwar and contemporary art in Europe predicts that “we’ll see very strong global bidding, not just because of the weakened pound, but due to the fact that prices will look so much more attractive tc global buyers because we’re still estimating in pounds. It could potentially look like bargains in October.” 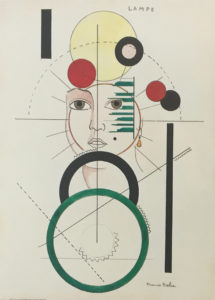 Selections from the collection of the storied dealer, who founded his eponymous gallery on London’s Cork Street in 1966 and passed away last November at age 81, hit the block at the start of Frieze Week. The 44 works by 23 artists include Alexander Calder’s wall mounted mobile, Le serpent rouge, from 1958, and comprised of red, blue, and black undulating forms (est. £2-3 million; $2.6-4 million).

Like his gallery, Waddington’s collection spans the modern, postwar, and contemporary epochs, and includes the geometric eccentricity of Francis Picabia’s Lampe, left, from 1923, still in its original, Art Deco-styled Pierre Legrain frame and formerly in the famed collection of Jacques Doucet, estimated at £800,000 to £1.2 million ($1-1.6 million), and Agnes Martin’s meditative and precisely Minimalist painting Praise, 1985, priced at £2 million to £3 million ($2.6-4 million).

On the more boisterous side, Jean Dubuffet’s large-scale and joyously energetic Visiteur au chapeau bleu avril, 1955, painted in the south of France in the titular year with a densely textured surface, is estimated at £2 million to £3 million ($2.6-4 million).

“Waddington kept all these works,” Outred notes, “like a time capsule in his house. These were the artists he really pioneered and developed in the marketplace.”

“Waddington kept all these works like a time capsule in his house. These were the artists he really pioneered and developed.” 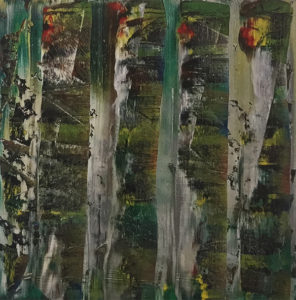 “Over the past decade,” says Jean-Paul Engelen, “the market has recognized Richter as one of the most accomplished artists of the past century, and probably the world’s greatest living painter. His abstracts have become some of the most prized examples of his work and this painting offers a really captivating showcase of his extraordinary talent.” The piece last sold at Sotheby’s New York in November 2010 for $752,500, topping its $450,000 high estimate.

“Over the past decade, the market has recognized Richter as one of the most accomplished artists of the past century.”

One-time Turner Prize nominee Lynette Yiadom-Boakye’s 8-by-6 1/2-foot Bound Over to Keep the Faith, 2012, right, is estimated at £80,000 to £100,000 ($106-132,000). It portrays a seated figure in a crisply rendered white shirt who, notably, has a rope entwined around his waist, instilling the work with a mysterious and unsettling vibe, almost akin to a painting by Francisco Goya. The grinning figure’s head is turned, as if seeing something invisible to the viewer. 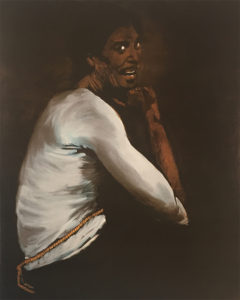 Lynette Yiadom-Boakye, Bound Over to Keep the Faith, 2012

In a somewhat related figurative vein is Henry Taylor’s striking composition Walking with Vito, 2008. In it, a richly colored Los Angeles streetscape features two male figures and a fearsome mastiff ambling along a busy roadway, simultaneously evoking both pulsating contemporary culture and art historical references. “It’s probably one of the best paintings he’s done,” says Outred. “He’s a much underrated artist.” The painting, formerly in the Saatchi Gallery’s collection in London, includes a poster that visually echoes Barack Obama’s campaign, plastered on a wall above an advertising sign for human hair. The piece is estimated at £40,000 to £60,000 ($53-79,000).

Taylor’s visibility and market appeal have been rising, with his work recently appearing in London at the Camden Arts Centre’s exhibition “Making & Unmaking,” curated by fashion designer Duro Olowu.

In the realm of contemporary abstraction, Bridget Riley’s striped and luminous Greensleeves, 1983, inspired by the artist’s 1979-80 trip to Egypt, where she saw the tombs of the New Kingdom Pharaohs in the Valley of the Kings, presents interweaving vertical bands of five colors (est. £400-600,000; $528-793,000).

The so-called “Egyptian palette” of sky blue, terra-cotta, green, ochre, and off-white play off one another in the artist’s rhythmic and patented choreography.

Zero movement stalwart Gunther Uecker creates a visual ruckus with Riß (Rupture), 1986, a five-by-five-foot explosion of huge nails punctuating the canvas and replete with the artist’s handprints across the wounded field. If that sounds dramatic, it’s supposed to be; in Uecker’s violent variant of Abstract Expressionism, the canvas is literally split in half by the whack of an ax blade (est. £400-600,000;
$528-793,000).

Piggybacked on the postwar and contemporary entries, the separate-catalogue Italian Sale stars Alberto Burri’s scorched and cratered abstraction Nero Legno (Black Wood), 1961, executed in what looks like the acrid aftermath of a battlefield firefight in wood, fabric, and acrylic on board (est. £1.8-2.5 million; $2.4-3.3 million).

Burri’s market has soared of late, thanks in large part to his artwork-packed Guggenheim retrospective last fall, “The Trauma of Painting,” that lionized his process-based creations.

From another giant of the postwar years, the multi-punctured abstraction Concetto spaziale, Teatrino (Spacial Concept, Teatrino) of 1965, by Lucio Fontana, depicts a sea of turquoise in watercolor paint on canvas, mounted within a shaped, lacquered wood frame. It is pegged at £350,000 to £500,000 ($462-661,000).

Lesser known but growing in global stature, Mario Schifano is represented with Grande particolare di paesaggio italiano a colori (Great Detail of Italian Landscape in Color), 1963-resembling in some ways a mini Robert Rauschenberg-which features painting in enamel and pastel on paper collage laid down on canvas in three elements. The long title is press-typed in block letters across the top of the composition, infusing it with an authoritative patina. This piece also carries a £350,000 to £500,000 estimate ($462-661,000).

On another note, Michelangelo Pistoletto’s time machine depiction Due persone the passano (Two People Passing By), from 1966, captures the urban anonymity and fashion of that era through use of painted tissue paper on stainless steel. Scaled at 71/2 feet wide and nearly four feet high, it is slated at £700,000 to £1 million ($925,000-1.3 million).

Pistoletto’s later works utilizing that mirror-like finish were done in silkscreen, so the delicately executed tissue paper on the stainless steel is more rare, and thus more desirable.

Elizabeth Peyton, The Earl of Essex, 1995

Local artists get a bit of recognition on the block at Sotheby’s, with David Hockney’s boldly colored and deliberately spare landscape Guest House Wall, 2000, in oil on canvas and measuring 3 by 4 feet, carrying an estimate of £1.8 million to £2.5 million (£2.4-3.3 million). It is a worthy price for the storied painter, whose retrospective opens at Tate Modern in February 2017.

Painted in London and in the loose style that presaged his interest in capturing nature-and especially trees-in plein air style, Guest House Wall ticks all the right boxes.

The mood then changes dramatically with a recently graduated blue-chip group of once cutting-edge artists, hailing from a so far anonymous American collection.

The parade of abstract works continues with Albert Oehlen’s monochromatic and mural-scaled Untitled, 2007, a composition that is packed with pixilated, diagrammatic markings. It is from his long-running “Computer Paintings” series and estimated at £200,000 to £300,000 ($264-396,000). There is also
a 9-by-6-foot Christopher Wool piece from 2001, also Untitled, top, that has a visually dramatic surface, with Rorschach-like black stains dominating the splattered canvas. It is part of Wool’s celebrated “9th Street Run Down” series, and carries an estimate of £1 million to £1.5 million ($1.3-2 million). 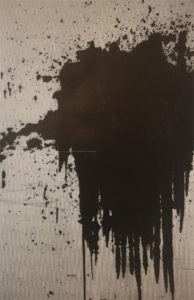 “It’s a beautiful and coherent group of works,” says the house’s James Sevier. “Attractive in price and full of well-established artists.”

Like its perennial archrival Christie’s, the house is offering its own separately catalogued Italian sale, led by a stunning Alberto Burri, Rosso Plastica 5, from 1962 and comprised of an inferno-like, melted-down mix of plastic, acrylic, and vinyl on canvas, it carries a £4 million-to-£6 million ($5.3-7.9 million) estimate.

The piece hails from a private Italian collection and has never been at auction. It was included in a presentation of Burri’s work in the Italian Pavilion at the 1988 Venice Biennale.

Speaking of the Italian line-up, Sevier noted, “Italian art is collected internationally and has become much more popular in the States where collectors are seeing good value in postwar Italian art.”

The sale also includes La primavera dell’anno millenovecentonovanta (The Spring of 1990), a tapestry from the year named in the title, by Alighiero e Boetti. Inscribed on the canvas overlap is “Jagun-Afghanistan by Afghan people,” giving credit to the female embroiderers who created the finished piece. It holds an estimate of £1.2 million to £1.6 million ($1.6-2.1 million).

Another top entry is Enrico Castellani’s visually dizzying abstraction Superficie bianca, from 1980, Executed in acrylic on shaped canvas, it is pegged at £1 million to £1.5 million ($1.3-2 million).