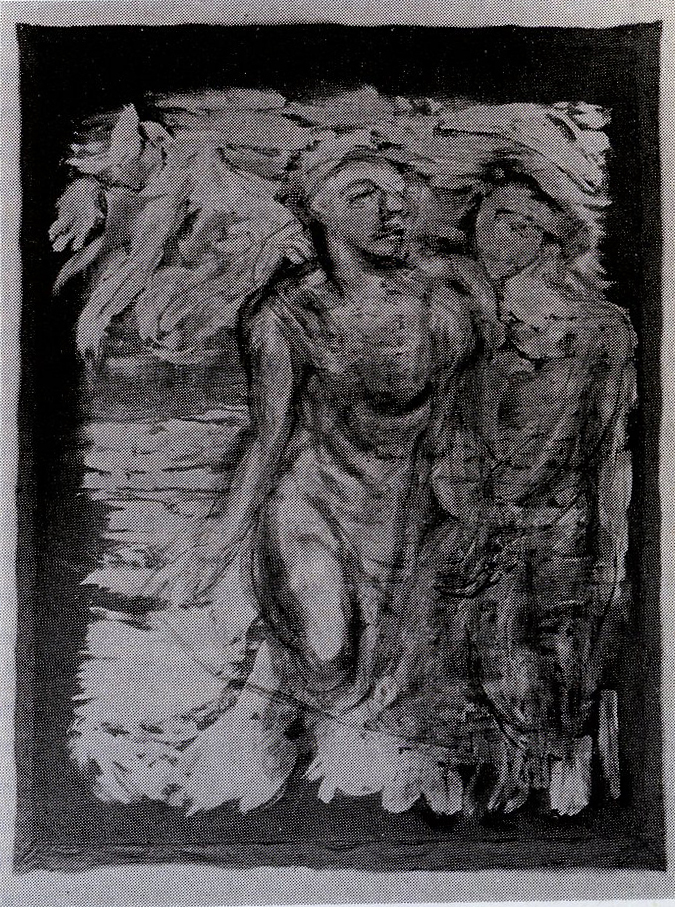 During the month of April, Rappaport exhibited seven of his recent oil canvases (all 103 x 78 inches) in a stunning sky-lit studio of a private house in Greenwich Village. The pristine light illuminating the paintings and the sole metal chair on the other- wise bare studio floor, lent a meditative air to the space. Stripped from their stretchers, the large scale canvases were thumbtacked to the walls, exposing their creased and folded-over borders.

White Madonna pushes two curvaceous female forms in the center of the canvas which might be a temporary wrestling arena for pregnant combatants. The expressively rendered bodies are entwined in a Siamese passion. The white lead paint drips down their torsos, spotting the raw canvas like spilled milk. The figures have a chubby, classical Picasso edge to them. The quick brush stroke and palette knife slashes project a sense of movement, as if a heroic gesture was about to unfurl. Despite the scraped-down “thinness” of the paint, the women convey a sculptural volume and the fetching notion that the white paint could trans- form into the wet plaster of fresco.

The paintings compete in a tug-of-war between softly focused color field and figurative contestants. Both throw a sweaty veil over the images. The ambiguity of the contest further sharpens the sensation of movement.

Then United We Shall Form the Abode, skews biblical notions with Renaissance iconography without drowning in pretense. A couple of indeterminate gender emerge from a choppy sea of primordial ooze, supporting one another in a life- saving embrace. The abstract elements of the white water undulate beneath the diaphanously wrought figures. Dazed and drenched, the triumphant duo bask in the new-found light.

This entry was posted in Reviews and tagged 29 Downing Street, Richard Rappaport. Bookmark the permalink.