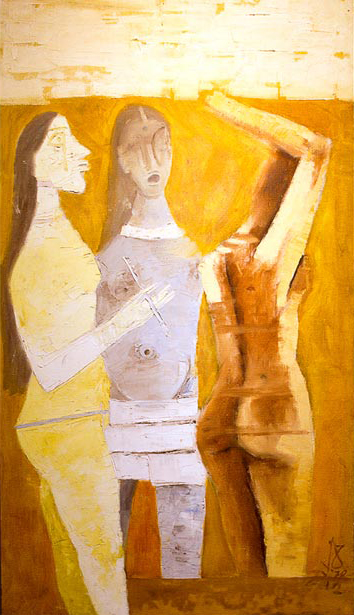 A mini-retrospective of M.F. Husain — the celebrated and colorfully controversial Indian painter who died in London in 2011, at the age of 95 — runs through October 24 at Aicon Gallery in NoHo. Covering six decades in approximately 24 paintings, the show affords a rarely seen overview of India’s Picasso, with excellent examples from every decade of his wildly prolific oeuvre.

Husain may be more familiar to art market followers than critics; six of his figurative paintings from 1955 to 1989 have sold for more than a million dollars at auction, and at least 60 have traded at auction in excess of $300,000. (Of the dozen or so works that are available at Aicon, prices range from $100,000 to $300,000, according to gallery principal Prajit Dutta.) Though he exhibited extensively in India and abroad throughout his long career, Husain has never had a solo presentation in New York, at least according to his exhibition roster published on the gallery’s website.

Husain’s career began in the late 1940s, shortly after India declared independence, when he joined the avant-garde Progressive Artists’ Group in Mumbai. Much like the early career of Pop Artist James Rosenquist, who made a living as a billboard painter in New York City’s Time Square, Husain painted billboards for feature films in Mumbai, an early experience that fueled his life-long passion for Bollywood and his more checkered, part-time career as a film producer. Husain — who ultimately favored painting in posh hotel rooms, especially at the Taj Mahal, over anything like an artist’s studio — mastered a brilliant visual vocabulary that evocatively mixed Hindu mythology with the decadence of India’s raging film scene, replete with buxom and barely clad actresses.

For example, in “Durga,” 1976, perhaps the most important painting in the exhibition, the titular multi-colored Hindu goddess — known as the root of creation, preservation, and destruction — sits nude astride a magnificent tiger that bares its claws and teeth. There’s a bigger story behind the powerful image: At the time, then prime minister Indira Gandhi had decreed a “state of emergency,” curbing press and public freedoms for 21 months from 1975 to 1977, creating widespread civil unrest. Husain seemed to celebrate that action in “Durga” by making Gandhi a goddess — and in turn, made himself a toxically controversial figure in India. Gandhi was later assassinated by a Sikh extremist in New Delhi in 1984.

Such irreverent uses of sacred imagery ultimately led to Husain’s late exile from India, following a rash of lawsuits and physical threats from Hindu extremists. (Though a Muslim and die-hard secularist, Husain preferred the more colorful stories and folk-tale like depictions found in the Hindu religion.) He then became a citizen of Qatar.

Hedonism of a sort returns in “Women in Yellow,” 1970, presenting a trio of long-haired, bare-breasted, loin-clothed villagers taking on different poses in a style that brings to mind Picasso’s “Les Demoiselles d’Avignon.” (The Picasso connection is not so far-fetched: Husain was invited to exhibit alongside the Spanish master in the 1971 São Paulo Biennale.) Another of the artist’s favorite and serially replayed themes is also present in the Aicon exhibition, with “Horses,” 2001, depicting the unbridled power of a quartet of galloping creatures.

When this writer met Husain in 2005 for a coffee at the Taj Mahal in Mumbai, shortly before his exile, the artist entered the room resplendent in a silk suit, open-necked shirt and brandishing what looked like a silver-tipped cane. The cane, it turned out, was an elongated bespoke paintbrush. I also noticed he was barefoot and moved gracefully, unlike any octogenarian I’ve ever met. At the time, just shy of 90 years old, he was in a mood, criticizing the local art scene and the rapidly expanding group of art galleries; he dismissed the lot “as shopkeepers because all they do is get the painting, sell it, get the commission and they’re finished.”

Still, he continued working late in life, including a private commission from an Indian businessman, 100 works titled “Our Planet Called Earth” for a reported $22 million. With well over 10,000 canvases estimated in his career, Husain sure learned a thing or two about the swashbuckling business of being an artist.