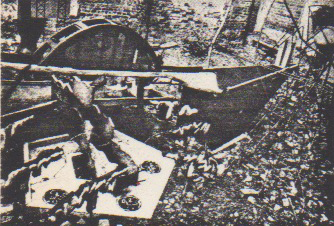 Brainwash, a twelve-foot-high, twenty-footlong outdoor fountain, :3 studded with radical me(aphors, gurgling an indictment against technology’s illicit relationship with capitalism. The setting is tenement surrealist, plunked down in the brickstrewn backyard of a Lower East Side building which houses ABC No Rio, a storefront enterprise catering to hard-core art (the neighborhood is partial to bloody religious curios and perfumed devotional candles).

A giant brain oversees the aquatic madness with a metronome’s precision, its scalloped folds awash in a tortuous stream of falling water. The brain is reminiscent of Peter Blume’s accordiannecked head in The Eternal City (circa 1934) while the caffeine-laced energy of the structure leans to Vladimir Tatlin’s Monument to the Third International (circa 1920) that took Leningrad by storm.

Howland casts a black totem pole of smudgepot-shaped bombs bristling with dynamite wicks, and weaves the anarchist brutes into her evolutionist’s web of organic forms. Her crinoids and diatoms (ideal names for punk bands) are the microscopic compost for oil and coal. Despite the flaunting of corporate identities (Shell, Exxon, Mobil, Gulf), the odds are astronomical that Brainwash will find a sponsor on a Park Avenue plaza. At the moment, its nearest neighbor is a lofty matzo bakery competing in the din with a howling pack of wild dogs. Howland’s polemical fountain possesses a clunky clarity.

This entry was posted in Reviews and tagged ABC No Rio, Rebecca Howland, Vladimir Tatlin. Bookmark the permalink.