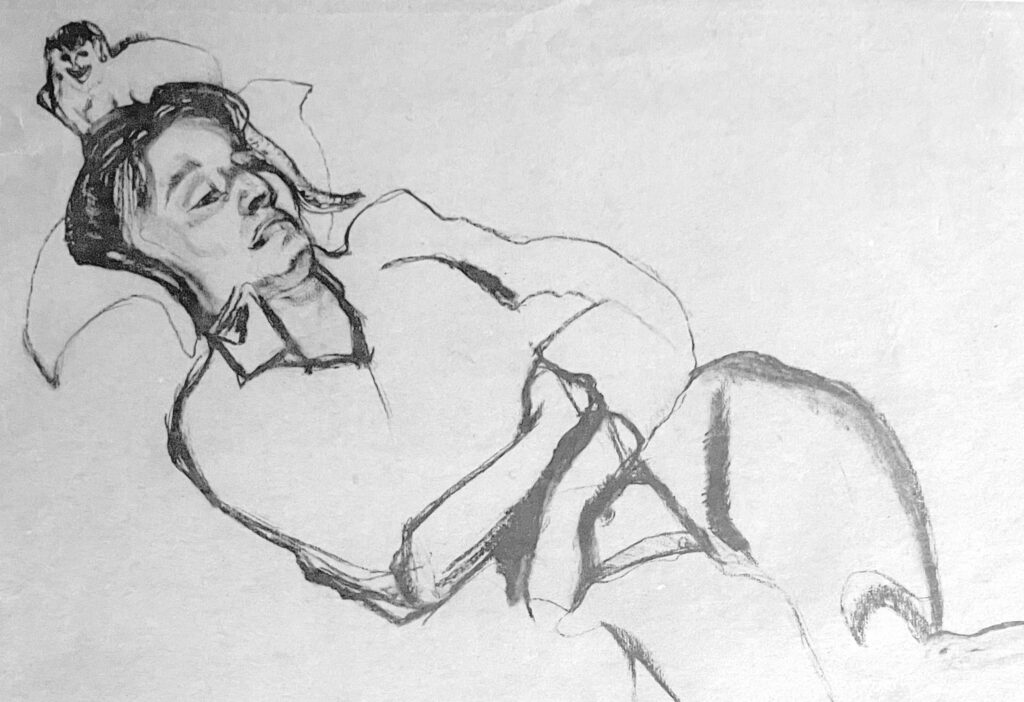 What kind of artist would the grandson of Sigmund Freud turn out to be? Go to the Brooke Alexander Gallery and find out. It is a remarkable show in that it was first slated for a museum slot, a museum that died before it opened (the so-called Broida Museum in Soho), so Alexander filled the void, also remarkable in that no other New York museum could or would fit this unique show in.

Fans of Freud (the artist) probably saw his gangbusters painting show at the Hirshhorn Museum in Washington in 1987, a coup for that institution and a rare treat for statesiders.

Freud is a mystery man—he didn’t even show up for his opening—highly sought after by royalty and accorded the hyperbolic accolades of Time mag critic Robert Hughes, who crowned the Berlin-born Englishman the greatest living realist in the pages of the museum catalogue.

In other words, Freud’s a hot ticket, a kind of kinky court painter who palled around with Francis Bacon (there’s a squiggly pencil drawing of Bacon from 1970, posed pensively with right arm up, scratching the left side of his head) and helped put London on the contem- porary art map well before Hockney.

“Lucien Freud Works on Paper,” some 64 images chosen by the artist, originated at the Ashmolean Museum, Oxford and represent a startling vision, beginning in 1936 when Freud was a wee teen, to 1987. Chronologically in- stalled, the works range from a linocut, Runaway Horse, with stirrups flying to the exquisite and equally ugly head of the flesh Lord Goodman in charcoal, a gouty candidate for inclusion in Orwell’s Animal Farm.

Freud is a stunning draughtsman and this show shows it off in a variety of media. He is strongest when he makes your stomach quiver as in the charcoal and crayon Man With Head Wounds from 1981. Reading about Freud’s personal history, viewers should not be surprised if those wounds were conceived in situ, gory as they are.

Just as his paintings seem to expose warm flesh writhing and a j cast of characters worthy of a more demented Dickens, the works on paper are less “living” but still dramatic. The visual memory of Freud’s chilling portrait of megacollector Baron Thyssen (the gentleman who recently shelled out $24.2 million for a Gauguin at auction) from the Hirshhorn show rumbles around the handsome gallery space as a jittery ghost.

Likewise, the superbly ghoulish Dead Monkey from 1950, loaned by the MOMA, with its squinched eyelids and pouting lip is terrifyingly human. Its strange and careful pose short-circuits your reaction so one is left with a half-stifled laugh and cry.

Freud’s realism beats a surreal gong, especially the near-hallucinogenic stuff from the 1940s. Rotted Puffin from 1944, in conte pencil and colored crayon, is a heap of expertly-wrought feathers, wrapped in a kind of death cloak bandana. Its beak is still open, and you wonder what a bird’s death rattle sounds like.

Dead Bird from against an unremitting green background, echoes the wanton slaughter of World War II, as if the prostrate creature never knew what hit him.

In the same way, Freud is constantly scraping away at the surface, digging deeper until blood is drawn. The work has a sharpness you can cut your fingers on.