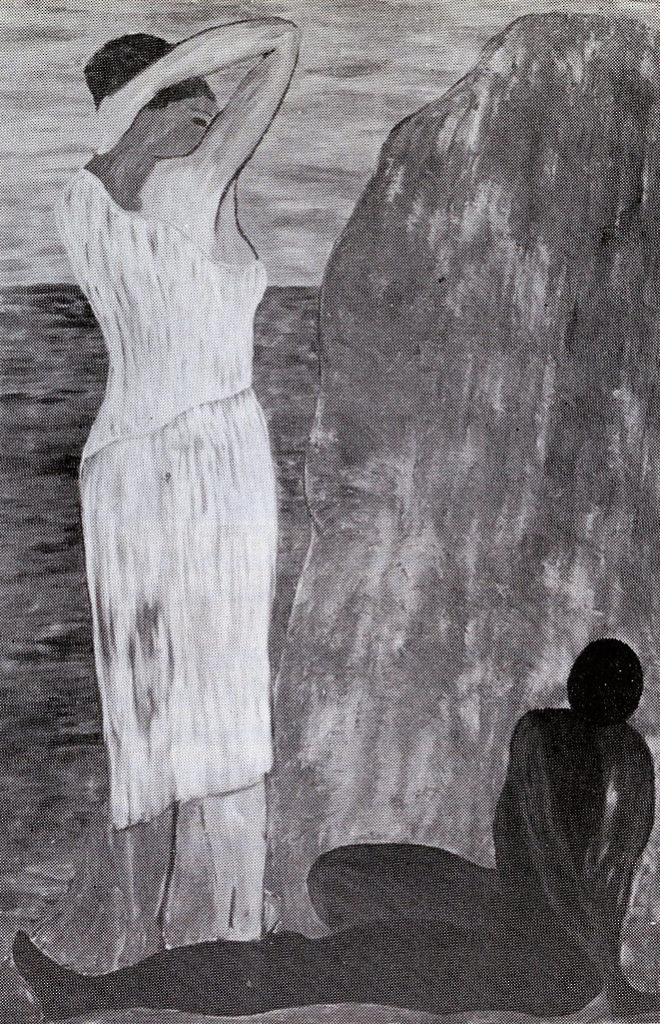 The fauvist landscapes in Martha Boyden’s paintings are inhabited by an exotic lot of Amazonian women, shy of facial expression but monumental in form. Delphic myth weaves through the work, imparting the definite impression of a matriarchal order.

Bathers (101 x 66 inches) is dominated by a white draped goddess, posed before a golden-hued rock of phallic proportion. A thick-limbed, chocolate shadow figure reclines at the heroine’s feet. “His” bowling ball head has all the detailing of a faceless De Chirico mannequin. No doubt there are a bouquet of Jungian metaphors to choose from when digesting this submissive yet powerful creature.

The upraised arm of the female figure bends behind her bronzed neck in a feral yoga stretch. The curve of the arm snugly follows the slope of the rock and the two forms imbibe the Mediterranean blue sea and salmon-colored sky. There is no attempt to convey depth or realistic tension between the horizon line.

It is momentarily tempting to recall Matisse’s Bathers by a River or Poussin’s Orpheus and Eurydice while encountering Boyden’s sun-dappled beauties and pancake-flat landscapes. The trail grows cold when the blank countenance of the protagonist in The Myth of Spring (66 x 101 inches) appears on the green-and gold-speckled savanna. Voluptuous brushstrokes plough a triangular wedge of grassland into a cascading wedge of water, bisecting the picture plane. Ankle deep in the cobalt blue river, the Venusian figure (perhaps Demeter, the Greek goddess of crops) receives the fruits of earth and water. A heart-shaped shaft of rose-colored light accents her loins and tints her breasts in gold.

An existential Arcadia governs the seasons in Boyden’s paintings. Strange figures of androgynous persuasion toil in the Sisyphean currents of rivers that run like escalators. The pictures are difficult and provocative because their “prettiness” cloaks their snarling intention. Boyden’s Arcadia clutches a heart of darkness.