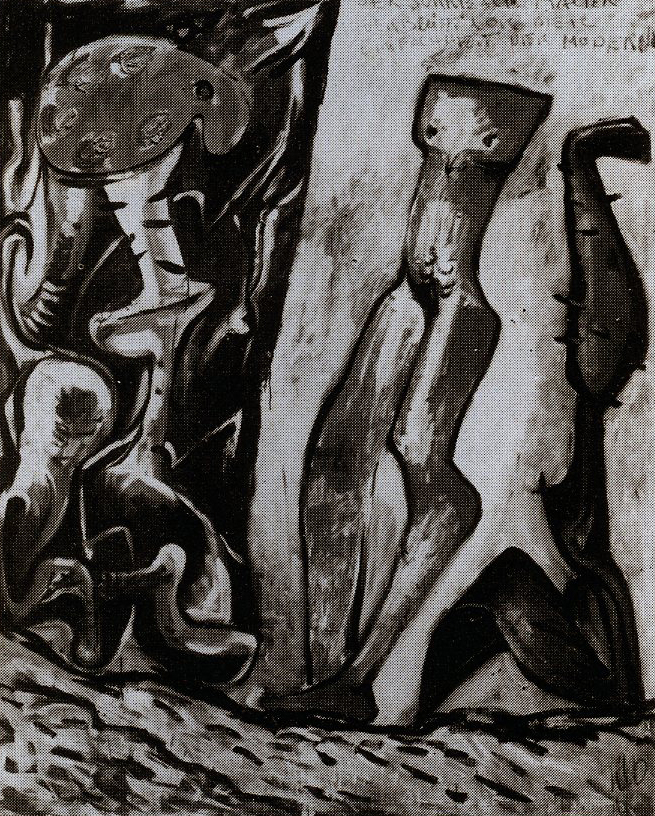 Tracking Lupertz’s acrobatic leaps on the canvas trampoline hasten a psychosomatic out- break of vertigo. From the unappetizing palette of murky grays, blues and browns springs a surreal batch of imagery loosely knotted Greek mythology. The muddy ebb of the paint surface repels the viewer backwards, though it seems necessary (contrarily so) to stand close. A candle- light luminescence swabs the image in half-light. The urge is to reach for a spyglass or switch on the search-light to get a better reading.

Just as Lichtenstein hunts and pecks through twentieth-century art history for subject matter, Lupertz seems intrigued by the analytical cubism of Georges Braque (say Man with Guitar, 1911) and Picasso’s macabre romp in Night Fishing at Antibes (1939).

In one of the two paintings titled Orpheus in the Underworld (77 x 62.5 inches), Lupertz descends into the nightmarish realm of Hades, searching for the kidnapped nymph, Eurydice. From the look of things—a bulging fish-eye in spitting distance of a severed arm, clutching a crenelated dagger—Orpheus did not fare well. A second dream-spattered version (at least they share the same title) exiles the framed profile of a goateed poet (bearing a striking resemblance to Rostand’s swaggering Cyrano de Bergerac) into the top right-hand corner of the picture. The wise- guy countenance of the boxed-in bard (is that rouge or a bullet hole in his cheek?) provides staged relief from the confounding cast of abstract furies raging across the breadth of the painting.

The mostly impenetrable mist of Grecian myth and Teutonic angst abruptly lifts with a flurry of nudes. Lupertz asks a tantalizing question—posed to himself—where is the figure going? The exhilarating dialogue in The surrealistic painter is flabbergasted by the simplicity of the modern suspends the duelists on a tight-rope. A palette-headed backbone confronts his fleshed- out adversary while a cross-legged nude with stovepipe features takes up the rear flank in mut- ual admiration. One is tempted to kick the jutting calf of the headless “modern” like the tire of a new car. The rhetorical flare is awesome.

This entry was posted in Reviews and tagged Marian Goodman, Markus Lupertz, Surealism. Bookmark the permalink.