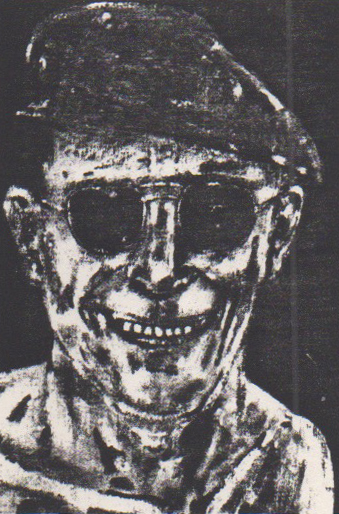 It would be prudent to carry smelling salts while viewing the ferocious images that engulf the gallery in paintings that range from twelve to eighteen feet wide and ten feet high. The figures in Mercenaries and Interrogations are double – lifesize with little background to distract. Golub constructs scenes from contemporary inquisitions taking place in certain Latin American and South African countries that most people shy away from even reading about in newspapers.

Golub dissolves the surface with a grease monkey’s can of “coop,” stripping away the layers of paint with a sculptor’s tool, so the images literally bleed into the grommeted canvas and joust about in a flurry of texture. Paintings this powerful have not been seen here since the artist’s retrospective in 1974 at the (now defunct) New York Cultural Center. While New York shudders at the taboo ballet conjured up by the sixty-year-old painter, the uncompromising historical sledge hammer pounds away regardless of queasy stomachs.

Canvassing images from magazines devoted to soldiers of fortune, soccer fans and S-M devotees, Golub melds expression, gesture, and musculature to a startling precision that vibrates—like a high diver testing his board—on the brink of action. The viewer assumes a villainous role, and is pushed into the canvas, unable to escape intimate eye contact from the assembled trio of tattooed brutes. The trussed prisoner, stripped and hung from his heels, resembles a Soutine carcass of beef. Sexual and racial tensions abound and once again, the untouchable subject matter, displayed in a sleek SoHo setting, will aggravate many sophisticated viewers to a stony silence. Golub takes the iron hand that rules, and strips away its velvet glove.

This entry was posted in Reviews and tagged Leon Golub, Susan Caldwell. Bookmark the permalink.