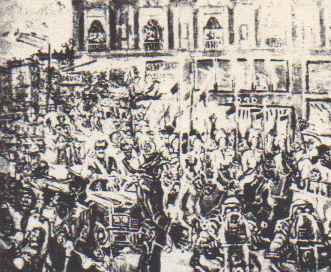 Joseph Delaney’s fifty-year retrospective of New York City parade scenes on canvas creates a cacophony of expressive images, a sometimes subdued deluge of marching humanity jigsawed with architectural icons. The motorcycle escorts in Harlem Parade 1, (1968, 20″x23″) resemble Darth Vader recruits ready to sling-shot into space. The planet in this case is Harlem and the creeping red Cadillac convertible ferries the late politician of high gloss, Adam Clayton Powell, and a crowned ebony beauty. Bystanders lunge against police barricades for a better view, while a flock of pigeons fly over the street scene in dizzy formation. Flags, confetti, prancing horses and crumbling building facades pepper this most extraordinary riot of jubilation.

This is no Ash Can School painter marching in the footsteps of a John Sloan or Reginald Marsh. Delaney, at a bouncy 78, defies any pigeon-holed niche. Perhaps eccentric, often miscued as naif, Delaney consistently delivers unique figuration of raucous cavalcades. From World War II War Bond rallies at Times Square (Cab Calloway shimmies in front of a gigantic cash register prop) to a funkily surreal Hostage Parade on Wall Street, a funny kind of history snakes by.

Just as Picasso lusted for the choreography of a bullfight, Delaney craves the delirious pomp and circumstance of a uniformed cakewalk. Rubbing all kinds of shoulders, the viewer stares into the yelping jaws of a miniature mutt or the flash gun of an instamatic camera before encountering the gear-gnashing spectre of an Ensorian skeleton in straw boater and bow-tie. The figures, twisted into a marvelous knot of motion, jump centuries is fashion and profile. Easter Parade 1 (circa 1965) sardines a Fifth Avenue sidewalk to the limit. The viewer gasps for breath. Luckily, the imposing facade of a granite-clad church prevents the spectacle from tailspinning off the canvas.

Delaney has painted the mean streets of New York for fifty years. His palette grows brighter, his figures crackle with the air of virtuosity. Yet to be represented by a commercial gallery, Joseph Delaney has been an “invisible man” long enough.