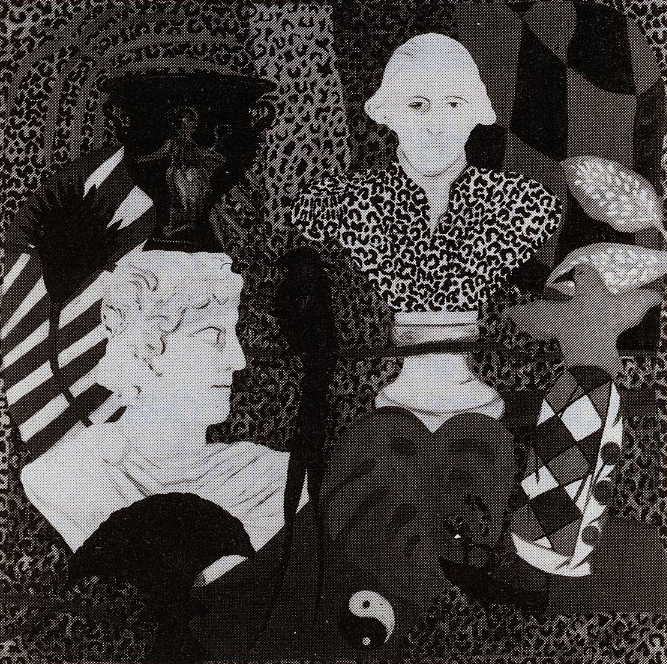 The hothouse still lifes of Hunt Slonem mate exotic birds with chalky curio-shop relics. A fortune-teller’s arsenal of tarot colors, from burnished gold to boudoir pink, shimmies through the elements to a samba beat. Eccentric juxtapositions flutter and caw like a turquoise-masked toucan.

In Skins (72 x 72 inches), the plaster bust of Marc Antony casts an uneasy eye at the diamond-patterned tights of a harlequin. In Alice in Wonderland fashion, only the variegated lower leg and pointed slipper are visible. A stuffed Bird of Paradise with extended wings sits on the jester’s knee, returning a beady gaze.

Increasing the mumbo jumbo traffic, the toga’d Antony balances a painted Athenian vase on his august head. Statuary and equatorial plumage fan dance in shallow space. Tabletops seem too pedestrian for these still lifes. Instead, they take up carpeted and wall-papered rooms, covered in ocelet skins. The spotted, wildcat patterning chatters away with unrelenting cacophony. An uneasy poltergeist spooks the assembled objects. Even the bust of George Washing- ton (a pedestal away from Marc Antony) gets into the act with his jaguar-patterned pullover.

The entire melange would crash into a heap if it weren’t for Slonem’s facile juggling of reworked elements, pushed around the canvas like restless chess pieces.

Slonem’s icon-infused imagery teeters on the edge of pattern and decoration painting. Despite his appetite for ornamental pool fish and Mexican toy parrots, the artist’s wickedly blunt painting style rescues him from such ho-hum categories. With a heel-clicking salute to Richard Lindner, Slonem out-mangos the mango and flaunts color at its tropical best.